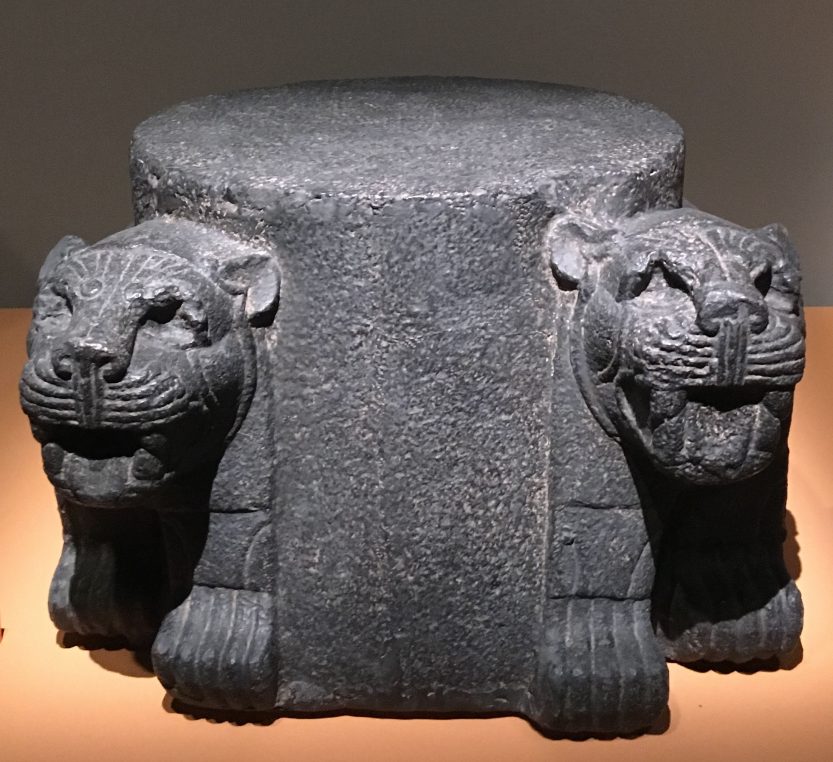 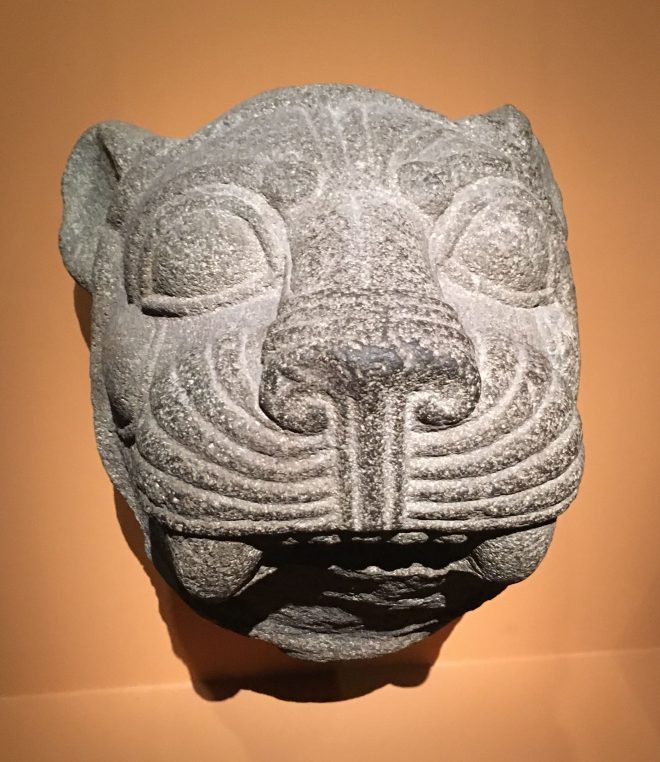 Lion’s head from the base of the statue of Katuwa, basalt, Karkemish, Turkey, ca 925 bc, London British museum

It is very humbling to enter an exhibition at the Louvre and realize that you don’t know anything about the topic and have to look up most words in the dictionary. This is what happened to me last week at the opening of “Royaumes oubliés, de l’Empire Hittite aux Araméens“. I looked around to see if I was the only one so disoriented and it seemed that every visitor was a professor of antiquities at the Sorbonne or at least an art historian. But, I nevertheless found the multiple “orthostates” beautiful aesthetically, and concentrated on the film showing Max von Oppenheim unearth the city of Tell Hafaf on the Syrian Turkish border, while building a railway track. 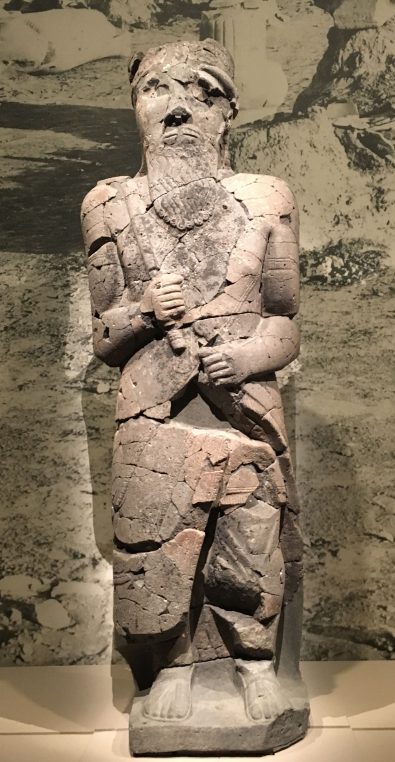 The topic of the show is the empire located in nowadays Syria and South West Turkey,  which was run by the Hittites until the 12 th century and exploded in tiny kingdoms, followed by the Arameans in the South who were of Semitic origins. They spoke the Luwian language, used hieroglyphs for writing and revived the art and architecture all around their world.  We are at the heart of the Old Testament, in Lawrence of Arabia’s (Thomas Edward Lawrence) country. Monumental statues, tiny pieces of jewelry, sculpted ivory,  incredibly modern sculptures, tell us stories of walled cities and great huntsmen. 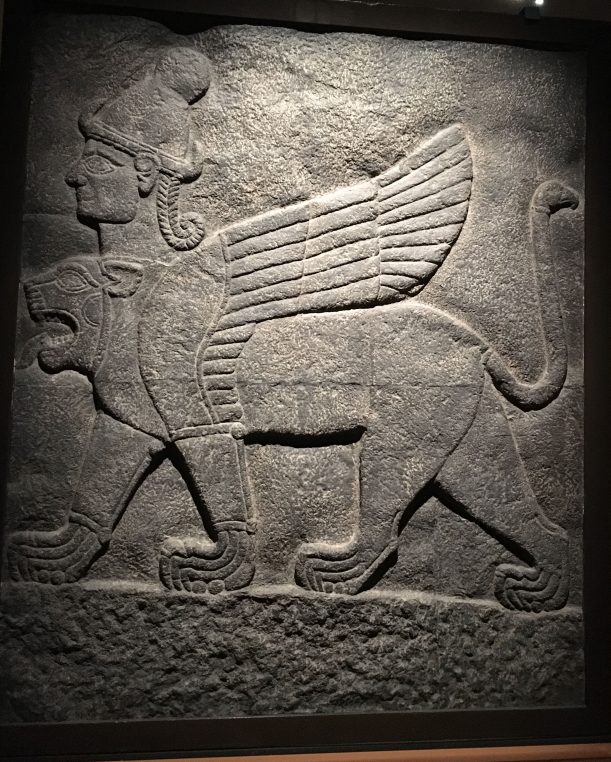 Orthostates are vertical stones used for the foundations of the houses or temples. They protected the walls from humidity and became very ornate during the Hittite Empire especially in Tell Hafaf.  The grandson of Max von Oppenheim’s secretary, Rayyane Tabet, a contemporary Lebanese artist, made 32 drawings of the 194 orthostates which can be seen at the entrance of the show. 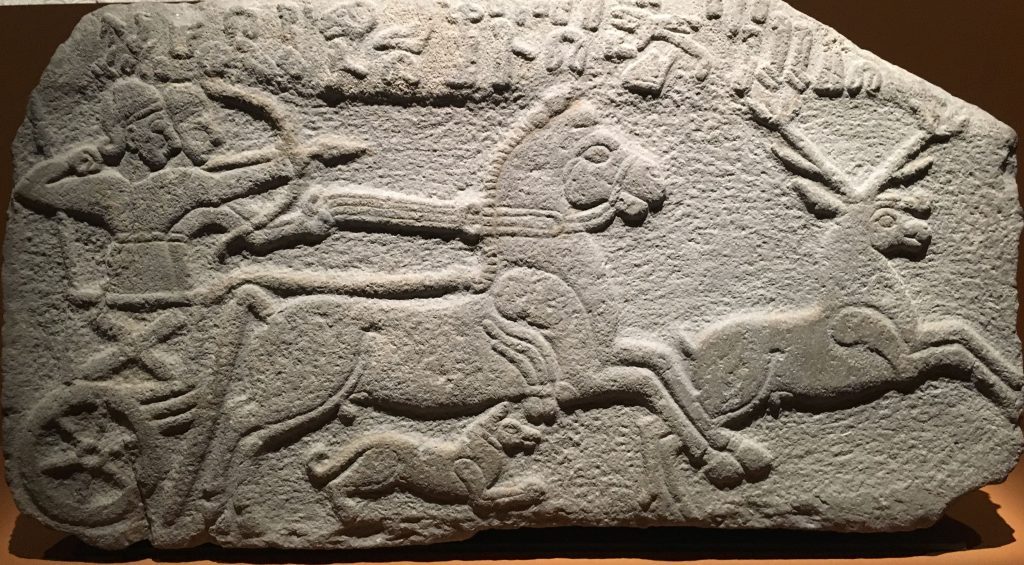 Orthostate with Hunting scene showing two men on a cart following a deer with hieroglyphs giving us the name of the king Mariti, Musée du Louvre

The Hittites had been the great rivals of Egyptians in Anatolia until 1200 bc. They fought Ramses II in 1724 bc in Qadish and Mursili I pillaged Babylonia. The great towns of Karkemish (3 000 to 605 bc, on the Syrian Turkish border) and Alep  are well represented with a processional alley of statues. Karkemish was eventually destroyed by Nebuchadnezzar. Make sure to see some of the 194 orthostates discovered by Max von Oppenheim and lent by Berlin’s Pergamonmuseum. There are some Luwian hieroglyphs that bear nothing in common with Egyptian hieroglyphs and thus remain enigmatic.

The collections of the Pergamonmuseum were bombarded in Berlin during the war and great care has been put into saving them a second time, which gives even more price to this exhibition. 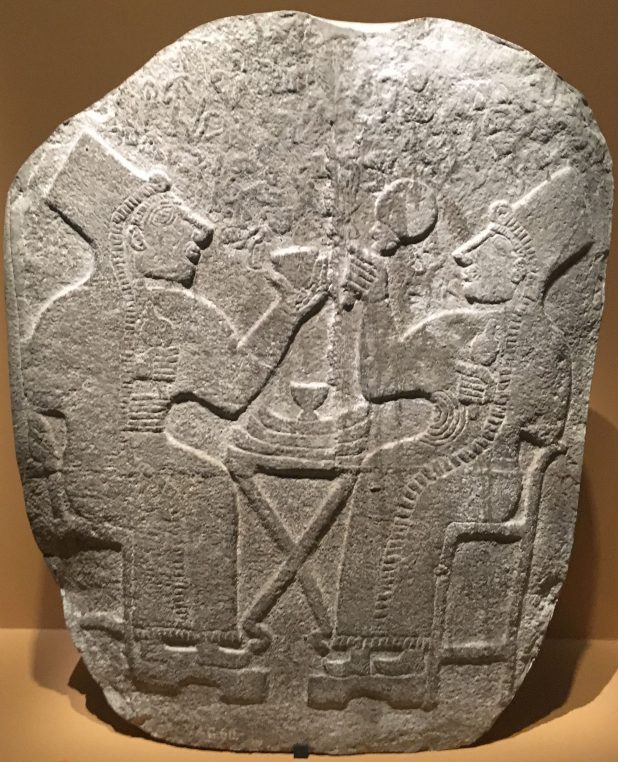 This funerary stone shows two women having dinner holding a mirror, a cup and a spindle. One of them is describe inhyeroglyphs as being Tarhuntiwasati

I highly recommend a guided tour of the exhibition unless you bring your own historian. And there are a few week ends devoted to Agatha Christie who, as you might know, was married (the second time) to archeologist Sir Max Mallowan, and wrote at least three thrillers set in Mesopotamia, Baghdad and the Orient Express. 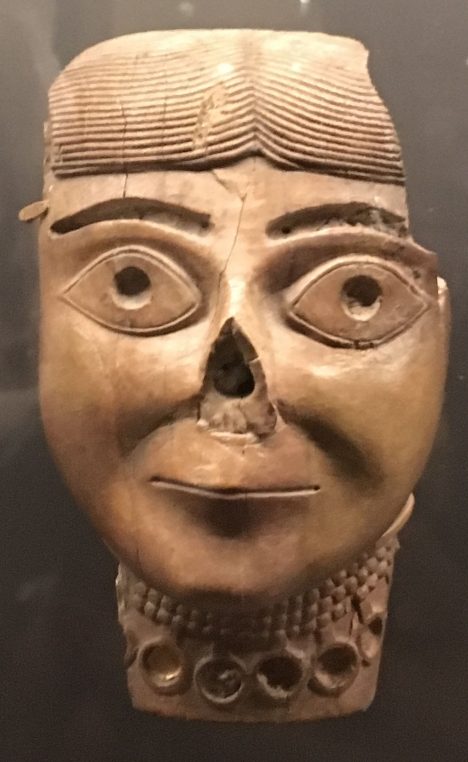 Head of a woman wearing a necklace, from Nimrund North Irak, Mallowan digs

Until August 12, Musée du Louvre. On May 9 at 12.30 and 6.30 pm, the curator Vincent Blanchard will give a conference in the auditorium. Many guided visits are organized from May 10 th including some for children.

One Comment on “Forgotten Hittite kingdoms at the Louvre”