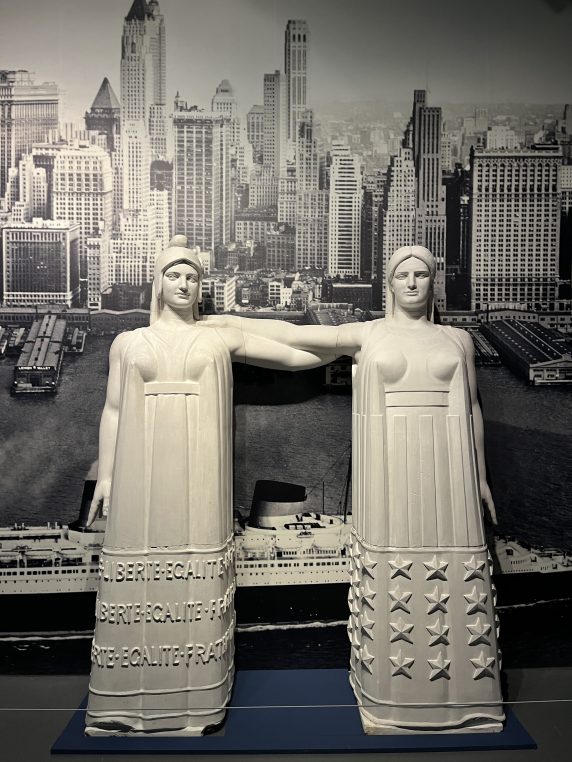 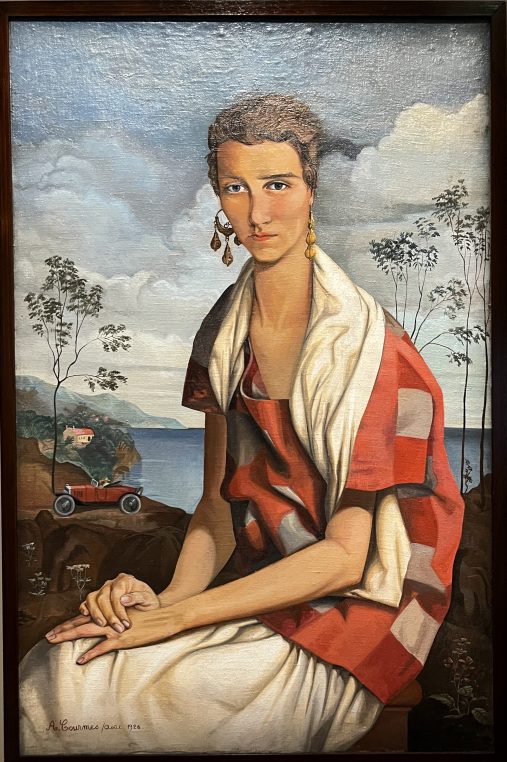 At Palais de Chaillot’s Cité de l’Architecture, a very specialized exhibition “Art Déco, France and Northern America” studies the architectural and artistic relationships between the 1890’s and 1930’s. It starts with Pierre Charles L’Enfant‘s plan for Washington D.C. commissioned by George Washington in 1891, and the tribute paid to “The adopted French architect” by an elegant table on baluster legs created by William Welles Bosworth at Arlington Cemetery in 1909. This gesture sealed the “constructive” friendship between the two nations. Bosworth became later the architect of the MIT campus in Boston and a key person in bringing the two cultures together. He adored France, and like hundreds of other Americans, studied at Ecole des Beaux Arts. He was instrumental in the restoration of Reims Cathedral and Versailles and for the creation of the School of Fine Arts at Fontainebleau, opened in 1923, all operations under John D. Rockefeller’s patronage.

Carlo Sarrabezolles, Model for a proposed monument to Franco-American Friendship (unrealized project) 1945-1947: France and the United States holding each other by the shoulders private collection

The beginning of the exhibition is very moving with many images of the young American soldiers joining in the war as early as April 1916 (a year before their country) in the Lafayette Escadrille. Most of them  came from affluent francophile families, and the young pilots were enlisted under the French uniform in the famous American squadron N124. Led by the young Norman Prince who died in 1916, these pilots chose as their insignia a Native American Chief’s head which they painted on their fuselage. It later became a recurrent motif in the decoration of Art Deco skyscrapers in the US and Canada. The motif was magnified in the memorial to 68 pilots of the squadron who lost their lives, which was built in the Parc de Saint Cloud. 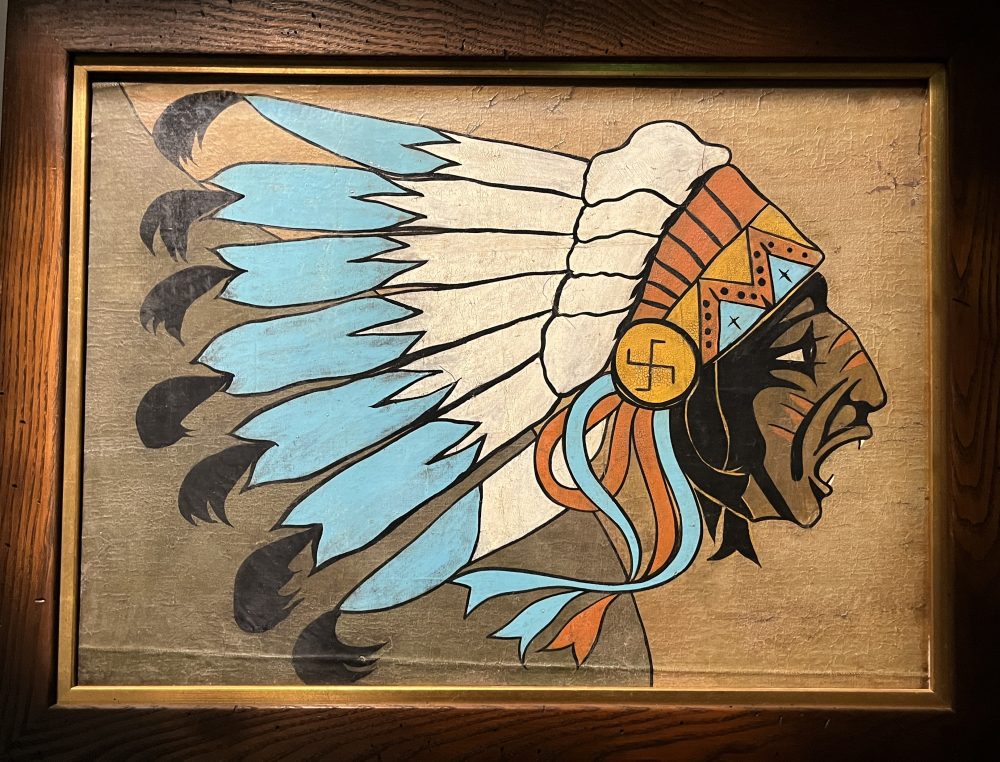 In the next gallery there are many testimonies who show how the US fought in the war: a lithograph by Albert Sterner “Over there” showing a martial French Republic the way to France to a US navy soldier, Italian tenor Enrico Caruso being recorded singing the song on the same theme which became the hymn for young boys leaving for France, pictures of the Liberty Bonds issued under President Woodrow Wilson, and promoted by the Foreign Legion and Franco Russian painter Alexandre Zinoview who had fought in France in the trenches. “The Time has come to conquer or Submit. For us there is but one choice. We have made it” declared President Wilson encouraging Americans to buy bonds. 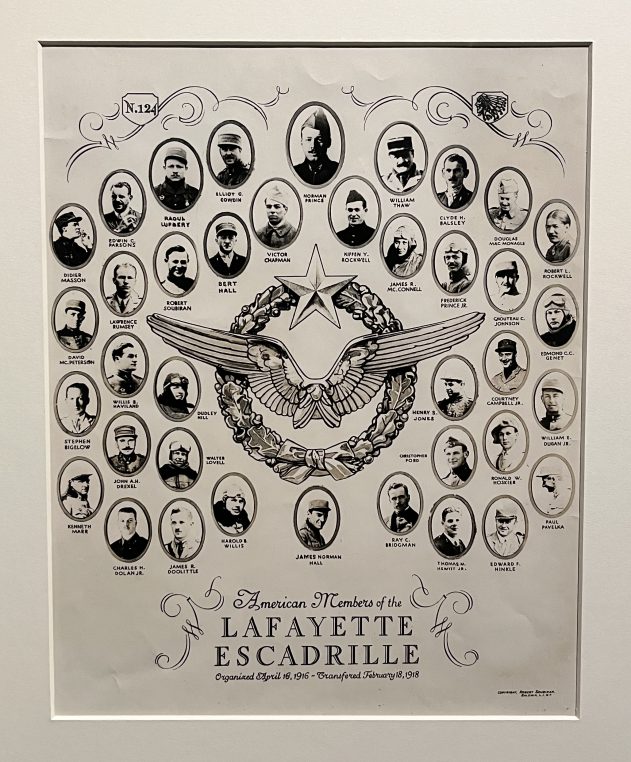 At the same time architecture was progressing fast in the US and the Beaux Arts Institute of Design was founded in New York by Lloyd Warren. It was modeled on the Beaux Arts in Paris. The climax of the curriculum was the Paris Prize which offered two and half years at the arts school in Paris. In parallel, a number of French architects were transmitting their new ideas in various American Universities. Jacques Carlu taught at MIT in 1924 and taught Lloyd Morgan who built the Waldorf Astoria, Donald S.Nelson who designed the exhibitions in Chicago and Dallas, and Léon Arnal who taught at the University of Minnesota and designed the Foshay Tower in Minneapolis, the only Art Deco building designed by a French architect in the US. 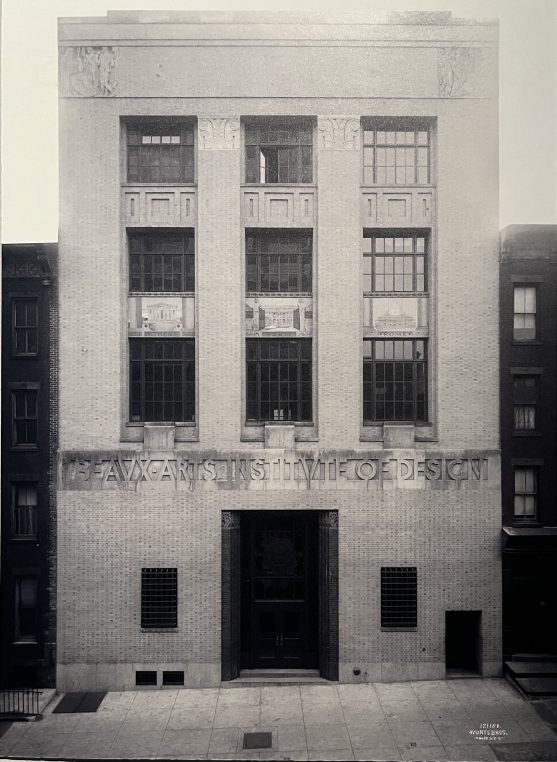 After the Exposition Universelle of 1925 in Paris which was so important for Art Deco style, artistic relations intensified between the two countries. The painter Bernard Boutet de Monvel moves to New York in 1926, and starts creating illustrations for Harper’s Bazaar. Large liners such as le Normandie serve as a floating decoration fairs with their lavishly decorated first class salons. A bronze by Raymond Delamarre, an armchair by Pierre Patout for l’Ile de France, the “Chariot Chest” in ebony by Jacques Emile Ruhlmann in 1930, are all examples of the dynamic of design back and forth. 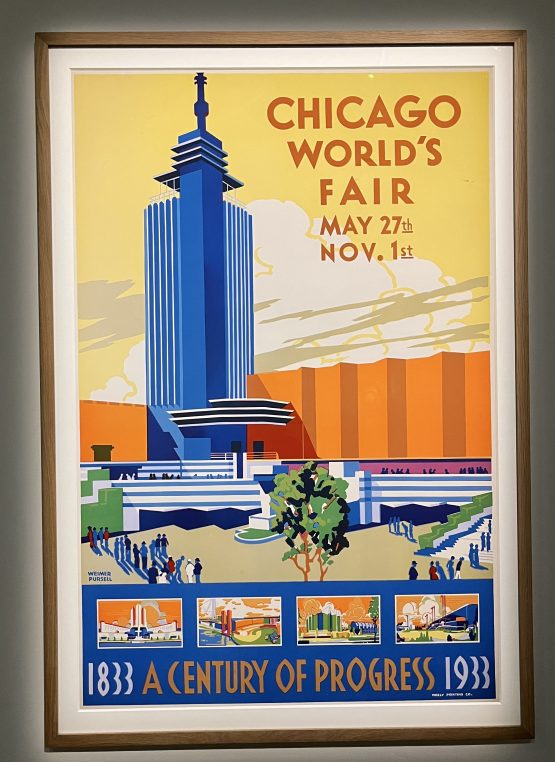 Jacques Carlu, Project for the French an Moroccan Pavilions at “A Century of Progress International Exposition” in Chicago in 1933

After the Depression of 1929, French architect Jacques Carlu proposed plans for a new Palais de Chaillot in which the exhibition is taking place. He had worked with Robert Mallet Stevens in the US and his wife Anne designed the curtain for the new theater in 1936. It is now one of the major Art Deco Parisian buildings with the grandest views of the Eiffel Tower which you can access when you attend a ballet in the theater.

There are many more architectural documents and objects of design to see in the show but what I found most moving were the early years during and after WWI and the Lafayette Escadrille. The main advantage of the show is to reunite in Paris, treasures from hard to see museums such as Château de Blérancourt which is two hours away, North of the capital, Musée André Malraux in Le Havre  and Musée des Années 30 in Boulogne where no-one ever goes for some obscure reason. The new director who was just nominated, Benjamin Couilleaux might change things around? Many pieces were lent by the Wolfsonian in Miami, which uses objects to illustrate the persuasive power of art and design and explore what it means to be modern. A perfect link between the US and Europe as is its founder, Mitchell Wolfson, the greatest collector and a passionate francophile. 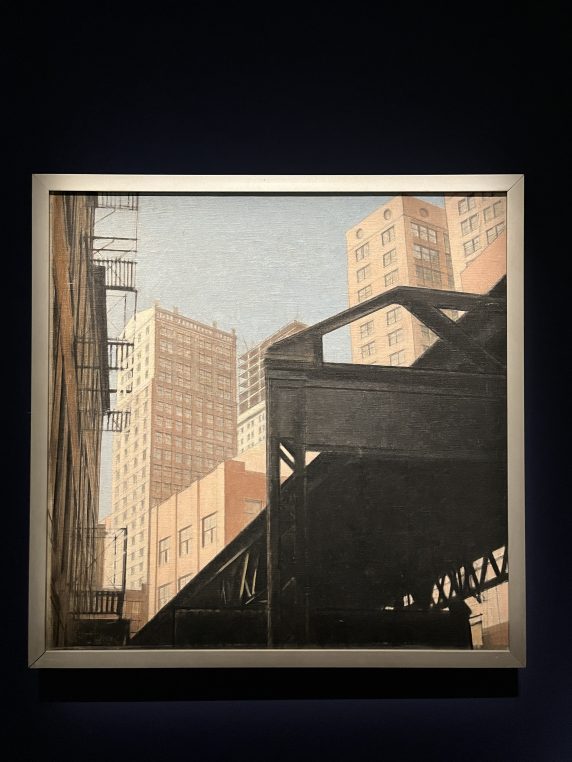 So if you like architecture and Art Deco style, make sure to go to Cité de l’Architecture before March 6.