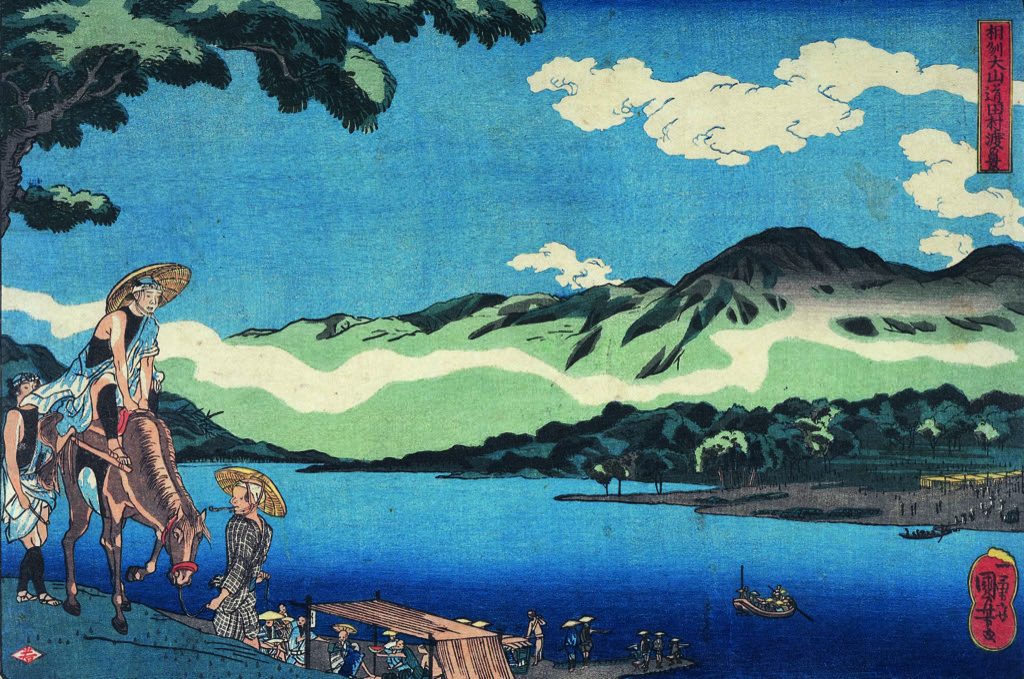 The Tamura ferry on the road to Ōyama, Sagami province, circa 1842. Courstesy of Gallery Beniya.

I did not know that before being called Tokyo, an anagram of Kyoto, the imperial capital until 1868, the main Japanese city for entertainment was called Edo and had more than 1 million inhabitants.. It is not surtprising then, that Kuniyoshi, the king of coloured prints in 18 th century Japan, had a large public and made over ten thousand of them during his 66 year long life.

Emperor Sutoku sends his vassals to save Tametomo, 1851, (detail) Courstesy of Gallery Beniya

The exhibition at Petit Palais is a big surprise and quite riveting. Curated by Gaëlle Rio and Yuriko Iwakiri, it is beautifully laid out and details of its violent and imaginative works are visually striking. 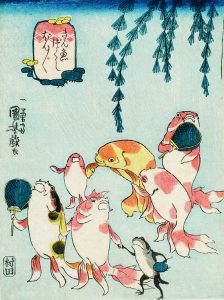 Christophe Leribault, director of the museum was intrigued by a catalog of Kuniyoshi’s print exhibited in Japan. When he realized that this popular Japanese artist, who was collected by Monet and Rodin, had been shown in France at Musée des Beaux Arts, as early as 1890, he immediately reacted. Thus the pretty exhibition linked today with darker but just as beautiful prints by Goya, Redon, Delacroix (who shares the same dates)…and lent by the Bibliothèque Nationale. Under Leribault’s ruling, the Petit Palais has turned from a sleeping beauty to a stalion in full action. Some of the permanent collection’s rooms have been rehanged and the effect is great. The sunny garden offers a perfect window for the « Countrysides by the water » of the exhibition which shows lakes and rivers around Edo.

Of course, the most striking pictures are those of warriors and giant fishes turning over in big waves. Some of these drawings have inspired manga writers and it is not surprising. This very popular art of illustration and publicity for theatre actors and shows, speaks to the heart and to the eye.

Between the two exhibits, a video room shows Agnès Guillaume’s « My nights » a dark vision of insomnia populated by black birds. The scenographer Didier Blin did a fabulous job with colored walls and managed to link two completely opposite styles of prints. Colourful Japan introduces us to dark European etchings. The project was not obvious but it works ! (Musée du Petit Palais, until January 17 th)

3 Comments on “From Edo to Tokyo with Kuniyoshi and more…”