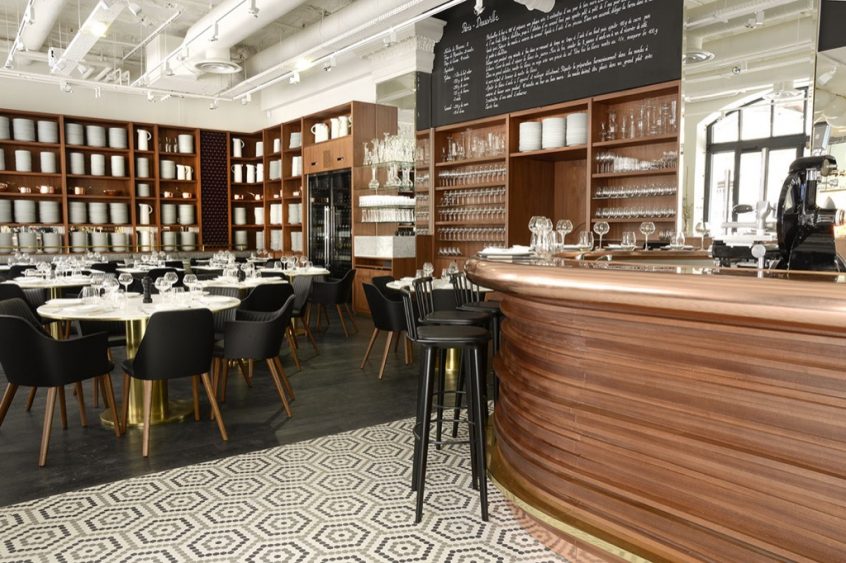 Gare Saint Lazare is traditionally the station in Paris that leads to Normandy and Marcel Proust took the train there to Cabourg. Nowadays, it leads to Giverny for a day at Monet’s gardens or to St Germain, to see the wonderful Maurice Denis museum. But you can also stay in Paris and enjoy the ambiance at Lazare, the one year old brasserie, which I love going to with a girlfriend after a good movie near the opera.

This time we had both been terrified by « Kingsman » which features Colin Firth as a lesser James Bond and Michael Caine as the genius traitor. The film is a little long and way too bloody. So we needed cheering up and gently walked over to the Gare St Lazare where Eric Fréchon’s team, cooks a very homy food. Last time I went, I had black pudding with mashed potatoes, this time mussels and French fries with a nice glass of Sancerre and a fantastic Paris-Deauville. You wonder what that is?

Well it’s really like a crème renversée, with beaten whites added and described as the chef’s mother’s recipe, which is actually written up on the slated wall… Deauville is the last stop on the line and also a very Norman town where creamy desserts are as famous as oysters. Christopher who was at the bar, chatted us up about his Florida years and the caramel and vanilla dessert : and we really loved it. Every time I go, I meet at least one friend and this time it was a Bostonian who was entertaining young American kids studying in Paris.

The place has the nice feeling of a station restaurant (I recently went to Searcy’s at King’s Cross St Pancras and thoroughly enjoyed its potted shrimps!) with a special elegance and poise. It is mandatory to book unless you eat at the central bar which is very confortable. And it’s perfect for jet lagged stomachs since it never closes from 7.30 to midnight !