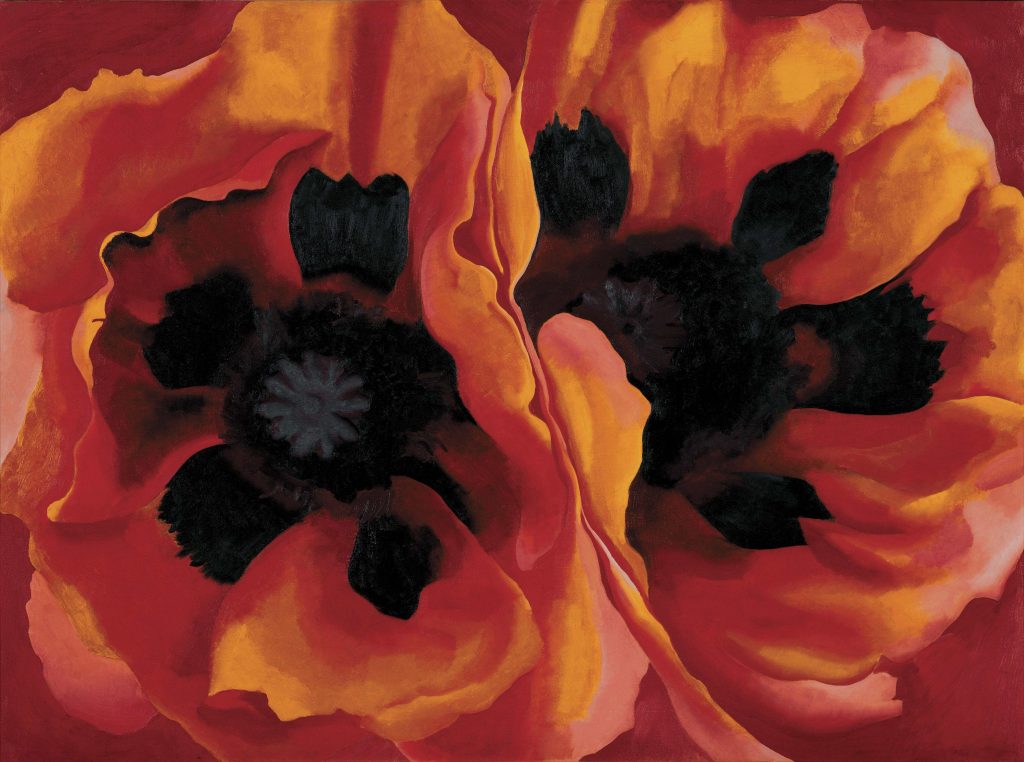 “Oriental Poppies”, 1927, collection of the Frederick Weisman Art Museum at the University of Minnesota, Minneapolis

“I want to exhibit at “291” more than anywhere else in New York” wrote Georgia O’Keeffe to her artist friend Anita Pollitzer. “291” was the gallery on Fifth avenue where Alfred Stieglitz had shown Rodin and Matisse in 1908, Cézanne and Picasso in 1911, Picabia and Brancusi in 1913 and 1914.  She had first visited it when she studied at the Arts Student league in 1908. She sent her charcoal drawings to Stieglitz in 1916 from Texas where she was teaching and the day the photographer discovered them marked the beginning of a legendary relationship. For 23 years from 1923 to 1946, he devoted an exhibition to O’Keefe’s work each year and called her “the spirit of 291”. Centre Pompidou‘s curators Didier Ottinger and Anne Hiddleston-Galloni have organized an exceptional exhibition (until December 6) of this “all American” artist where she is revisited through rare paintings. 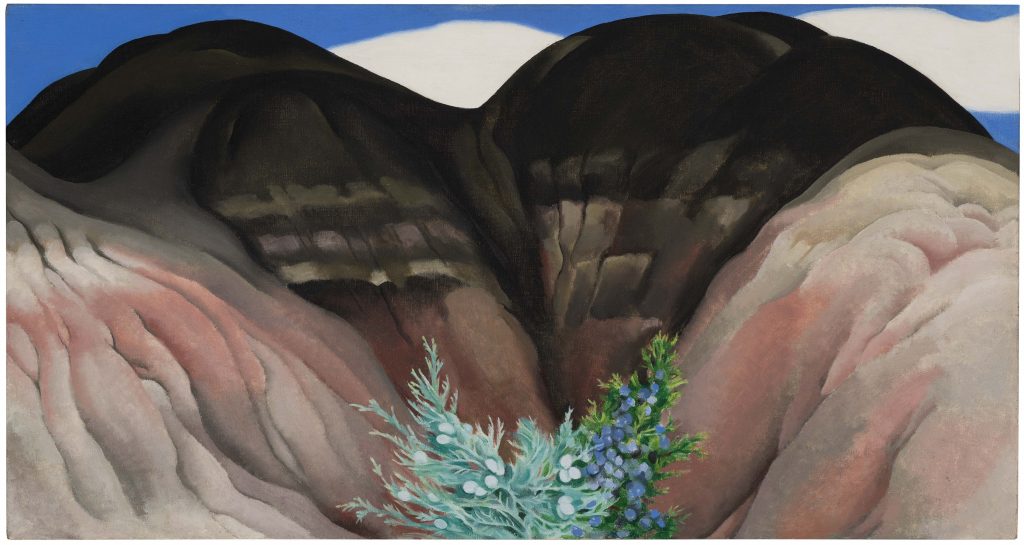 In France, Georgia O’Keeffe is mostly known for her scenes of New Mexico where she owned the Ghost Ranch in the middle of the desert, near Taos. She first visited it in 1929 and was fascinated by the Indian civilization, their dances and artifacts such as Kachina dolls used by the Hopi Indians. The landscapes she paints suddenly take the shape of human bodies with anatomical details and a flagrant eroticism which is also tangible in her multiple flowers. “Clam and mussel” painted in Maine in 1926, reveals its secret interior and is highly charged with erotic symbolism. But she also paints pueblos and eight times, the little church of Ranchos in Taos, founded in 1710 by the Spanish. For her, the church embodies the blending between catholicism and her own beliefs inspired by Native American culture, that the divine is immanent within all things.

At the beginning of the exhibition which was crowded from the very first morning, a series of watercolors on paper is called Nudes. They were painted in 1917 and were inspired by Rodin’s famous drawings discovered in 1908. They are a very rare example of explicit human figures. She uses color rather than line to express herself. Very soon, the couple will share their time between Lake George, upstate New York, and the Shelton Hotel in NYC. One painting of the Ritz tower at night in 1928 is particularly modern and gripping. They get married in 1924 and she paints both industrial landscapes and country barns. 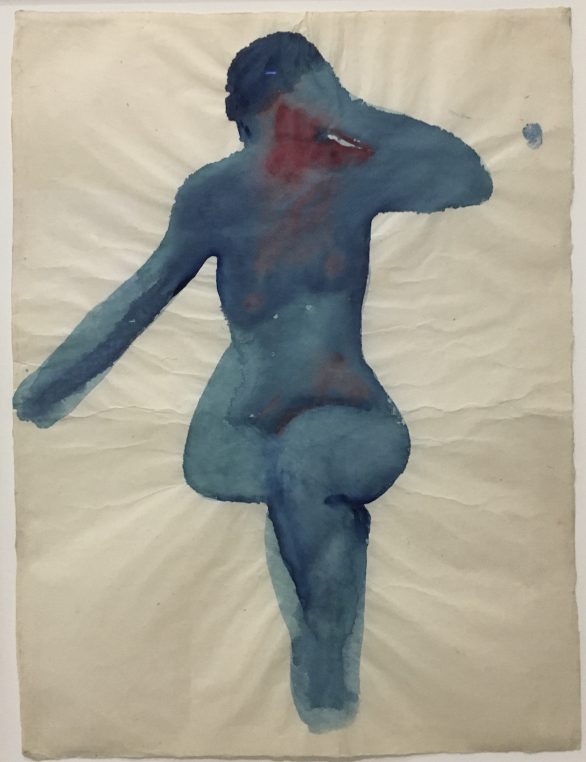 Further in the show, an extraordinary “Farmhouse window and door” was lent by MoMA in New York. Painted in October 1929, following her first trip to Taos, it is completely minimal and of her purest and simplified work. It shows a stark contrast in color with her New Mexico paintings and could be a sign of her melancholia when she returns to New England and its puritanism. In parallel, she has been painting enormous flowers from close up, filling the canvas and blowing up the models as if she was using a camera. “I thought I’d make them look big like the huge buildings going up” she said after seeing the new skyscrapers in New York in the 1920’s. 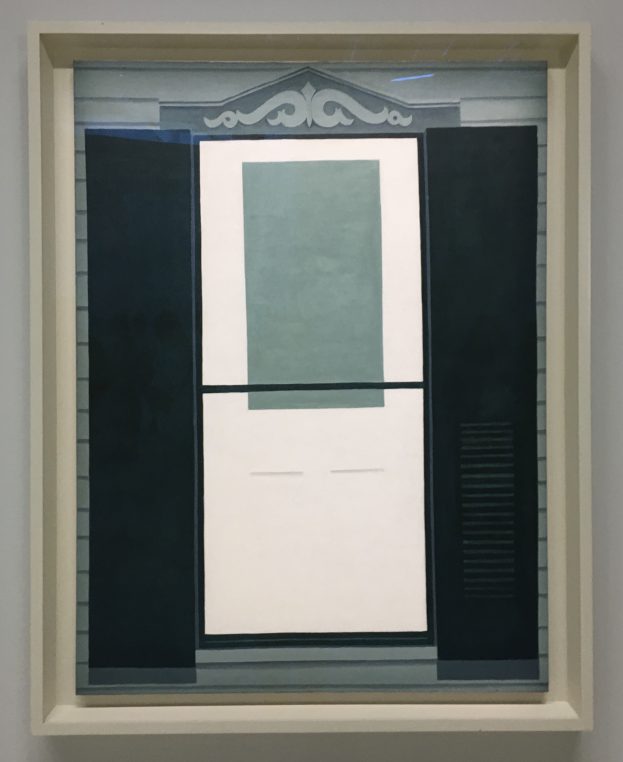 At the end of the show, which comprises a hundred major works by the artist, a whole section is devoted to abstract landscapes some of them as seen form the airplane. “Winter road” with a road drawn as a ribbon in the snow, “Sky above clouds” painted in 1976-77 and “Black Door with red” (1954) are all perfectly abstract paintings. 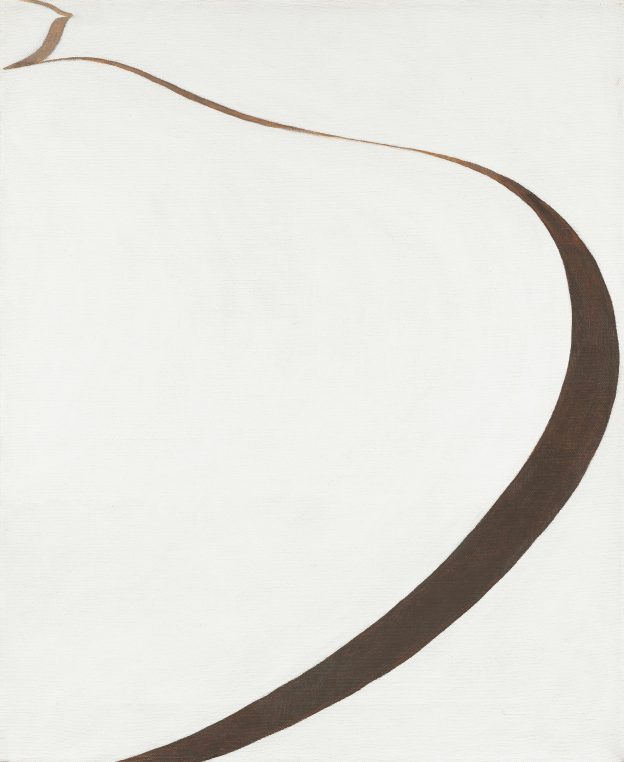 The show in its diversity is very exceptional for American museums never lend her paintings and the professional relationship which turned into romance and marriage between photographer Alfred Stieglitz and Georgia O’Keeffe very fascinating. Georgia O’Keeffe until December 6 at Centre Pompidou