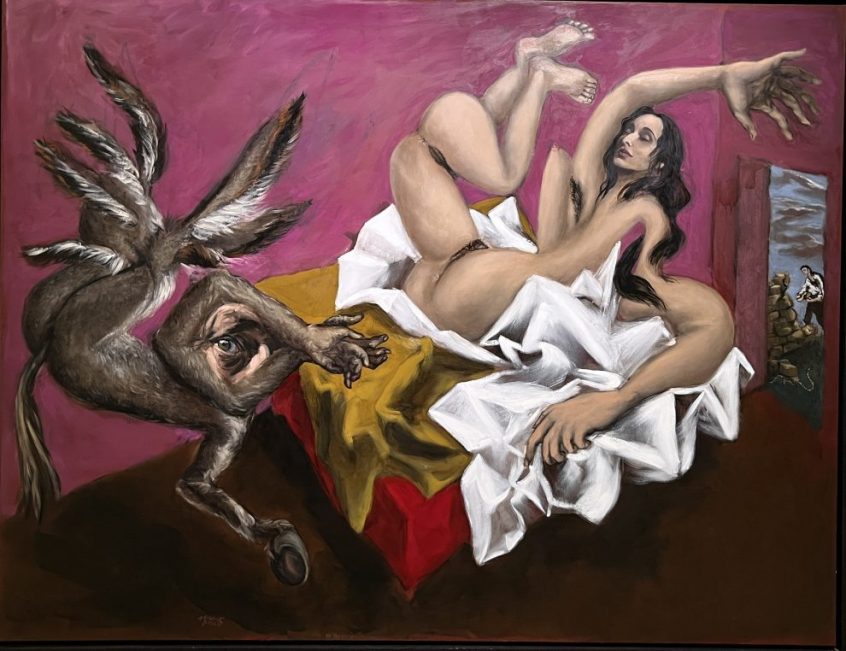 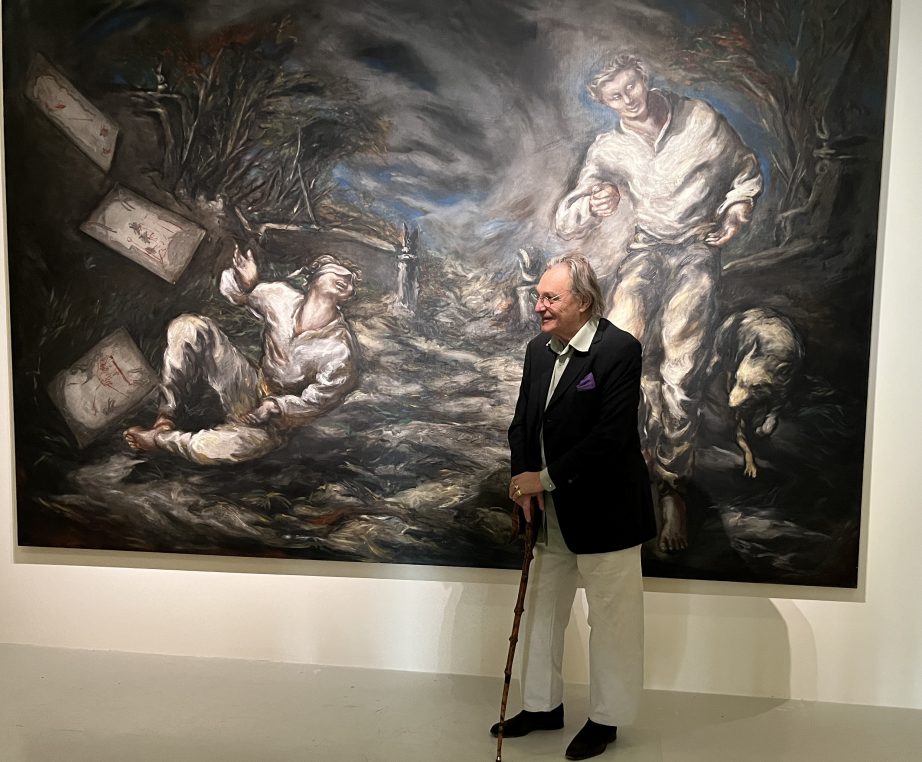 Gerard Garouste in front of “Adhara”, 1981 which was exhibited at Holly Solomon in New York in 1982

We spent the summer waiting for this large retrospective of Gérard Garouste’s paintings and no one was disappointed at the opening at Centre Pompidou! Sophie Duplaix, the very discreet curator of the show, dialogued with the artist who seemed extremely happy in his elegant blazer, light pants and brown suede shoes. We talked about his decor at the Privilège in the Palace night club which launched him with the general public in 1978 and how upset he was when he discovered it had been destroyed after Fabrice Emaer died. Garouste’s sensitivity and great intelligence strike the eye throughout the show. It is a major discovery, even for those who have followed his work through the Durand Dessert and Templon countless exhibitions. And the size of most works is astonishing. 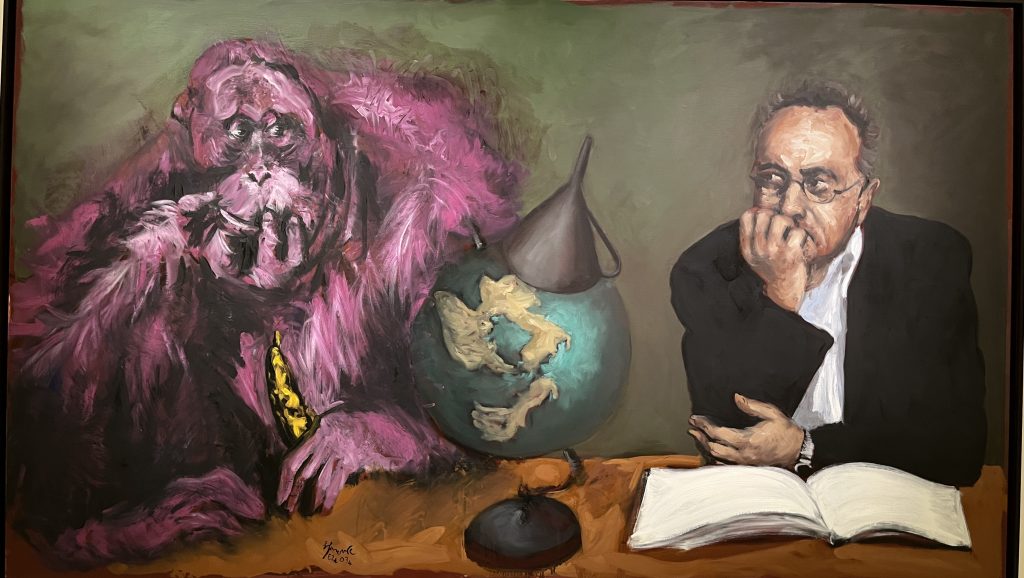 Bernard Blistène had already shown his work at Centre Pompidou in 1986, but Gérard Garouste, whose paintings are mostly owned by private collectors, has never been successful abroad, even though Leo Castelli, Daniel Templon’s mentor, showed him early on in New York in 1985 and 1987. Garouste was always diffident of conceptual art which was so highly considered at the time and has applied his talent at drawing and painting. His first works revisited art history, classical painters (Tintoretto and El Greco) and literary works such as Dante’s “Divine Comedy” and Cervantes’ “Don Quixote”. 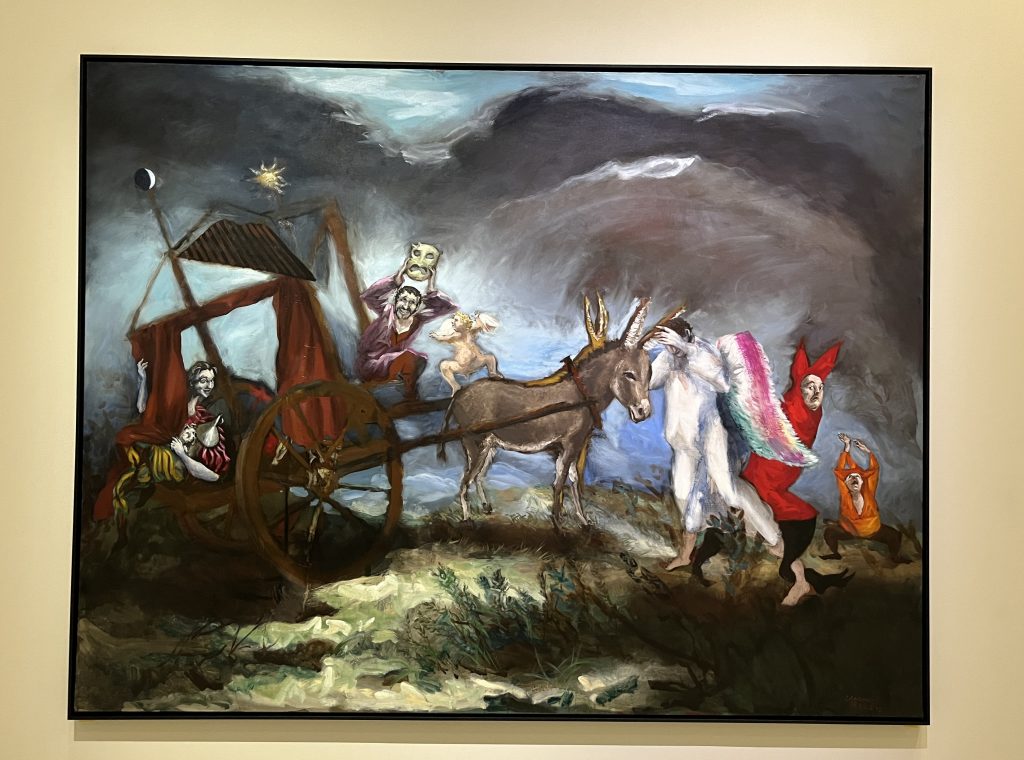 He very often appears in his pictures and so does his wife Elisabeth, whose pretty face and dark hair are a constant presence. Their three children are also featured in the show with fabulous portraits. There are images from his childhood in Burgundy  with the Rosselin Circus, a scene inspired by his father’s psychotic behavior in “One for the road” and a vision of the kitchen where his aunt slept on a folded iron “Apple-Pie”bed. 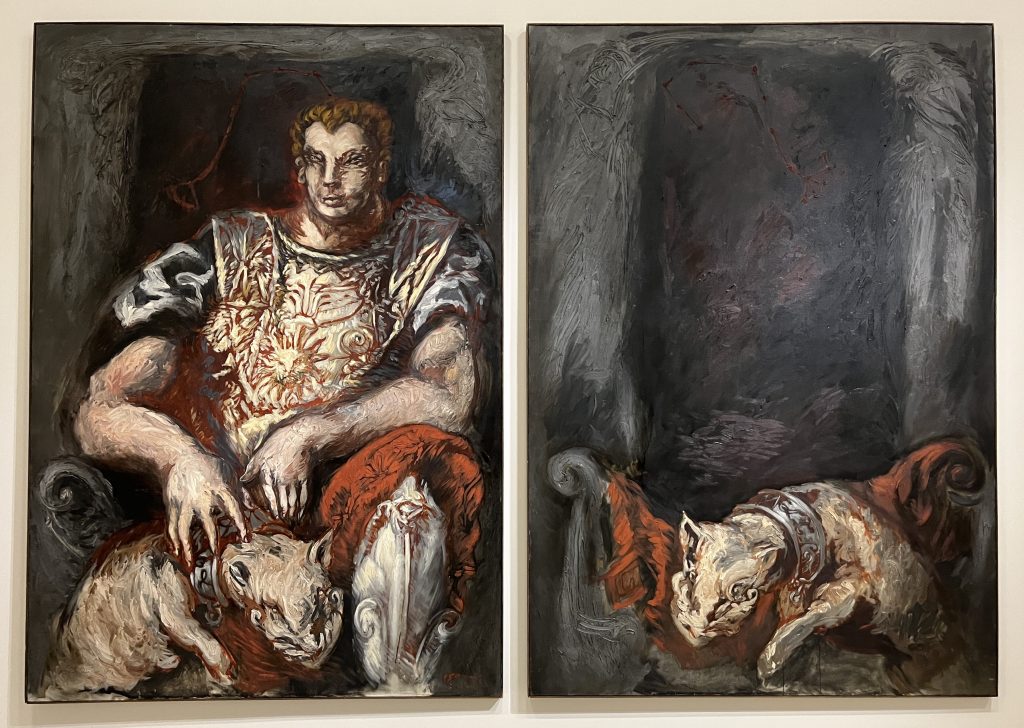 One of the very impressive paintings is “Orion” a large diptych bought early on by architect Jean Michel Wilmotte. It takes a whole wall in one of the first rooms and I had never seen it before. A strange vision of a pregnant woman riding a horse naked “Ave Eva” is “an approximate approach” of the flight into Egypt. Garouste is very passionate about Biblical studies and since 1990, he has undertaken the weekly study of the Talmud and Midrash with a rabbi friend, Marc-Alain Ouaknin, after learning Hebrew. Tamar and Esther are two characters which feature in the show. 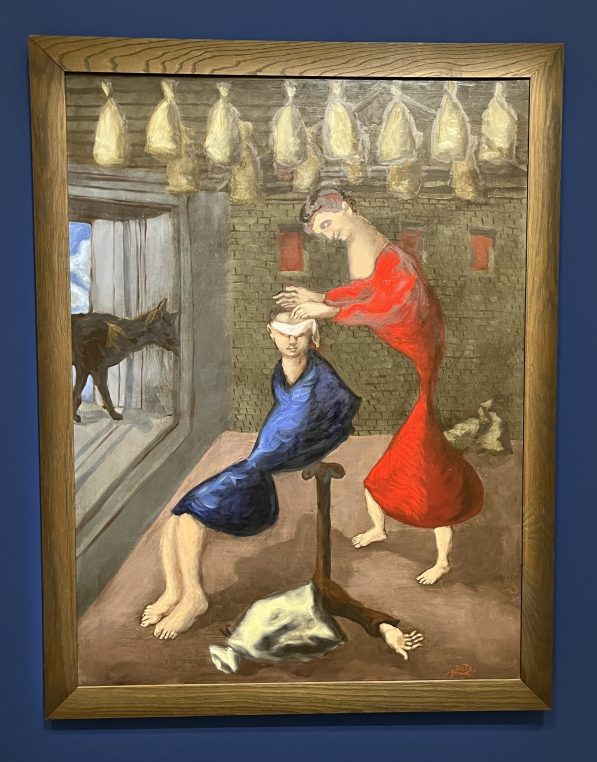 His mental health and psychological instability are a constant topic of interest also, which he described with great talent in “l’Intranquille” written with Judith Perrignon. The English translation can be acquired from Galerie Templon. It is the story of how he went in and out of Hôpital Sainte Anne, a psychiatric unit in Paris. How he tamed his thoughts and managed to produce these fabulous paintings. 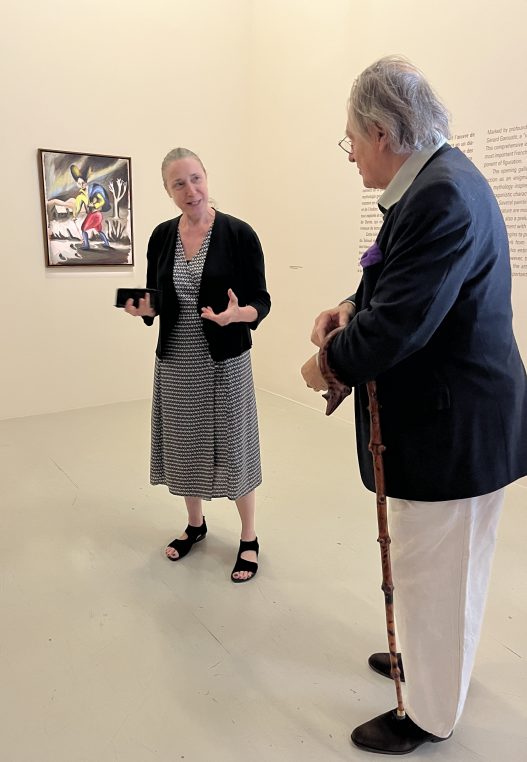 Curator of the show Sophie Duplaaix with the artist

His work in the theatre is also important and the portrait of director Jean Michel Ribes is extraordinary. When Jacques Chirac was mayor of Paris, he was commissioned to do the curtain of Théâtre du Châtelet in 1988 and it is still used today.

The exhibition is on at Centre Pompidou, until January 2, 2023. Don’t wait another minute to go, it is magical.

One Comment on “Gérard Garouste, a giant at Centre Pompidou”