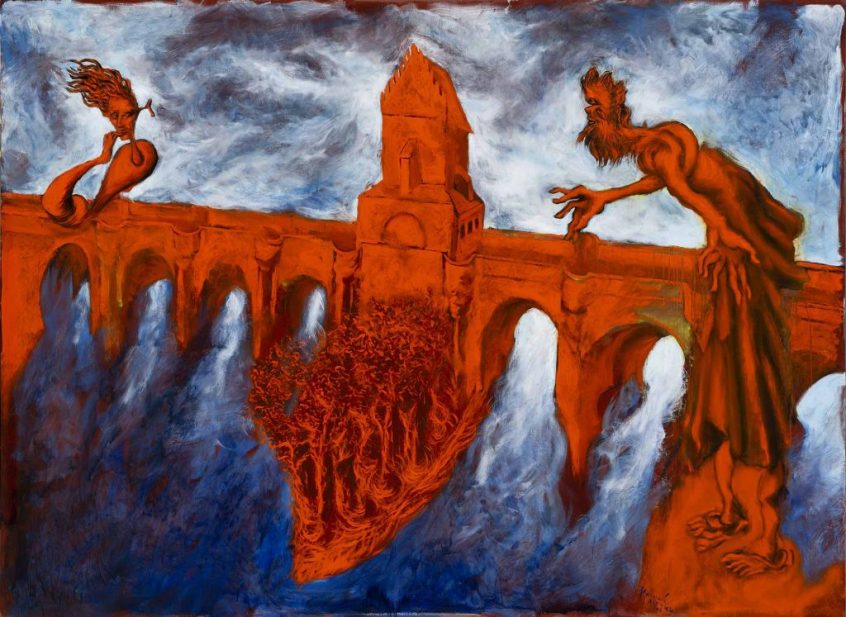 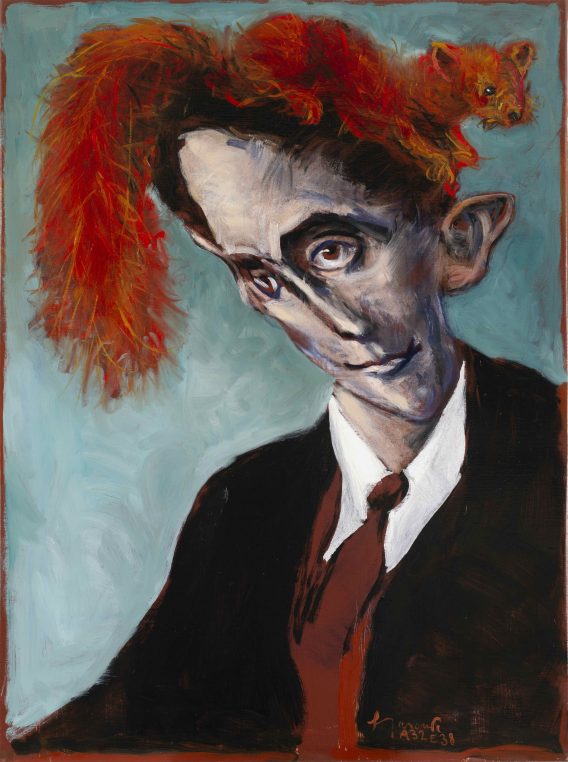 Gérard Garouste is one of the greatest living French figurative painter and he has been showing at Templon for close to twenty years. He published a fascinating book written with Judith Perrignon on his agitated psychological life, “L’Intranquille”,   translated into English as “A Restless Man” by Georgia de Chamberet and a film on his research on the Jewish faith has been shown at Beaubourg. A new exhibition “Correspondances”, on his encounter with Kafka’s literature and his conversations with philosopher and rabbi Marc Alain Ouaknin is visible by appointment, on rue du Grenier Saint Lazare and it is as strong as ever. 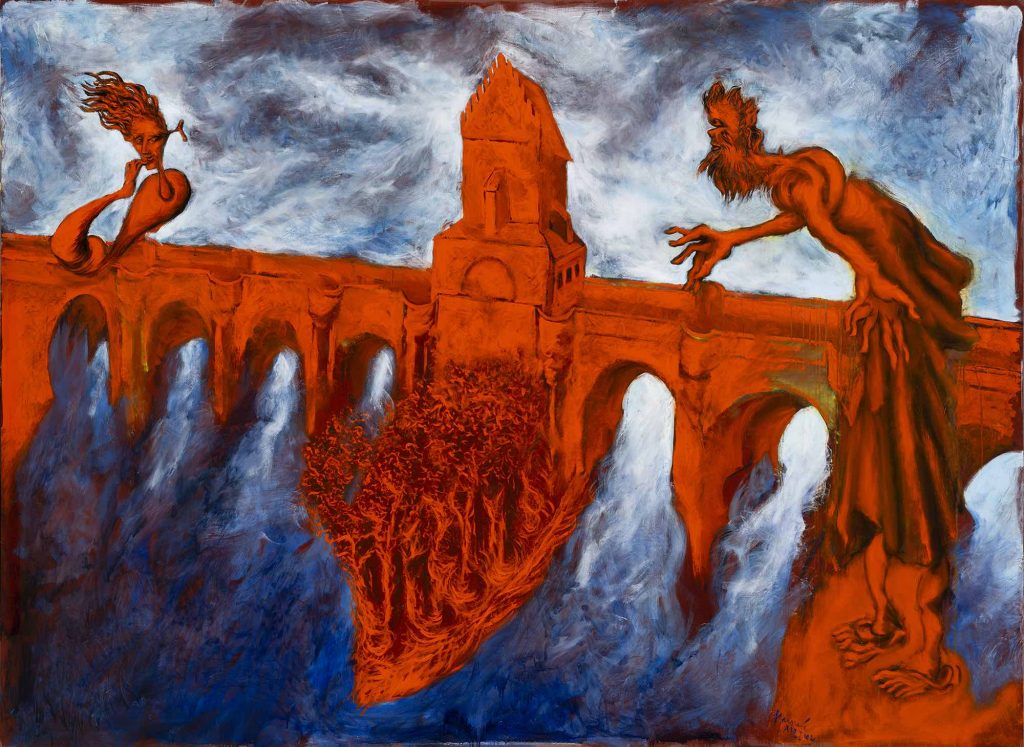 La Samaritaine has a strong role in the exhibition which includes twenty paintings of which “Alt Neu Shul sur le Pont Neuf” is one of the more emblematic. This woman from Samarie to whom Jesus asked for water at a time when Jews did not speak to Samaritans, is emblematic of the sharing of faith with one God for all. The two large paintings representing her are completed by the red painting of Pont Neuf (the same bridge which was wrapped by Christo) on which the department store La Samaritaine has been reigning since the end of the 19 th century.  Old and new, past and present, the Bible and Kafka but also contemporary philosophy and daily life are the source of images used by the painter. 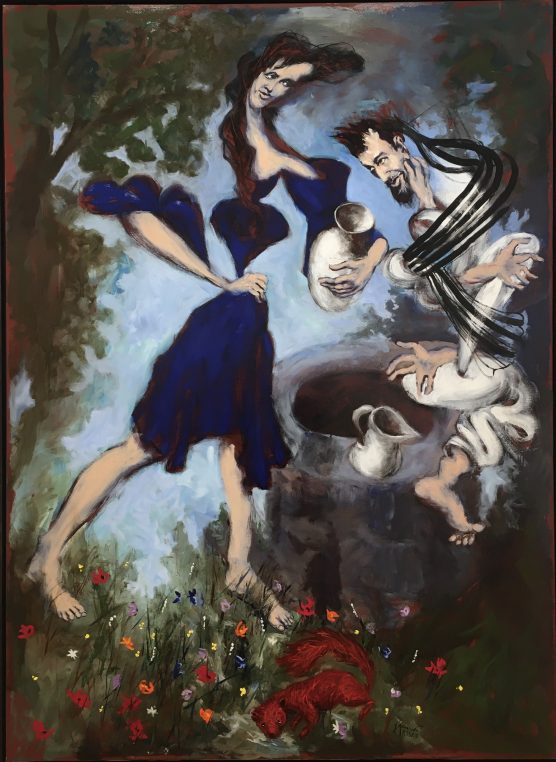 The Marten, the Samaritan and Jesus, 2020

The power of myths encounters history of art and the very large fresco set in Venice “The Carnaval of confettis” is a spectacular illustration of Garouste’s world. There is a sense of folly in this exhibition which is very rejuvenating in our troubled times. Each painting contains so many details perfected over the last three years by the artist in his studio. He has been obsessed with the Jewish religion for many years and discusses on a weekly basis with philosopher Marc-Alain Ouaknin and more recently through Kafka’s work. The happy and almost flirtatious representation of Jesus asking for water to the Samaritan is a stark contrast to the more serious portraits of Kafka and Chouchani, the Talmud teacher of Elie Wiesel and Emmanuel Levinas. 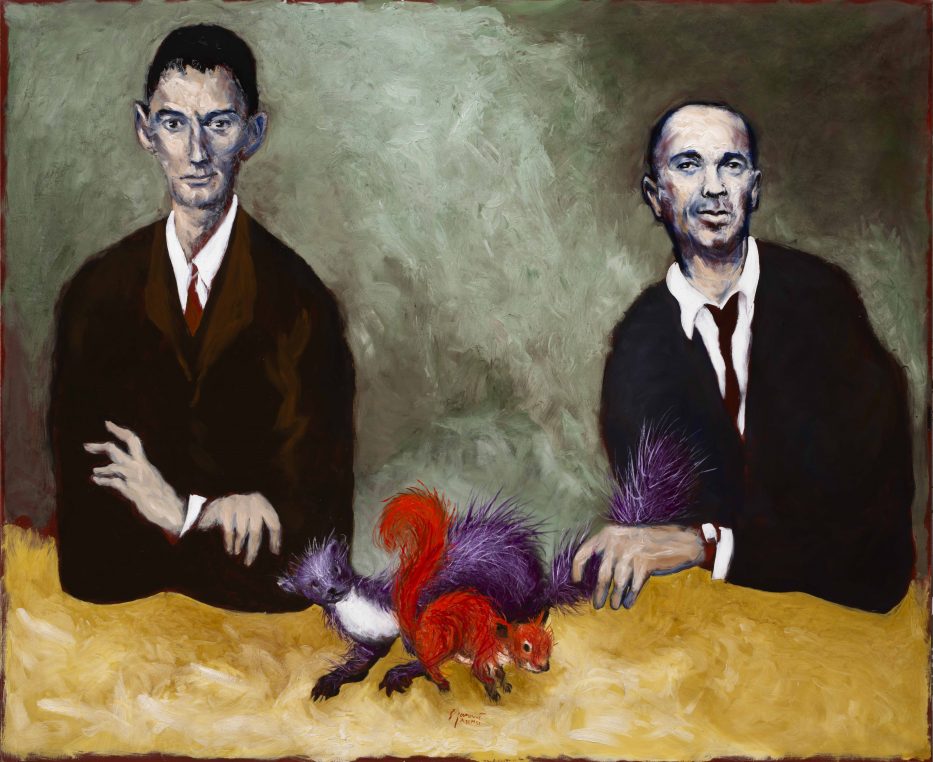 The Marten and the squirrel, portraits of Kafka and Chouchani, 2019, photo Bertrand Huet Tutti

A catalog and a book of discussions between Catherine Grenier and Gérard Garouste are available at the Templon bookstore  as well as his autobiography. You can watch the film here  and learn that the world confetti, in Italian coriondoli, comes from coriander seeds which were covered in sugar in medieval times. Flying dogs, the cat, the squirrel, the image of Tintoretto all have meanings which Garouste and Marc-Alain Ouaknin try to decipher. 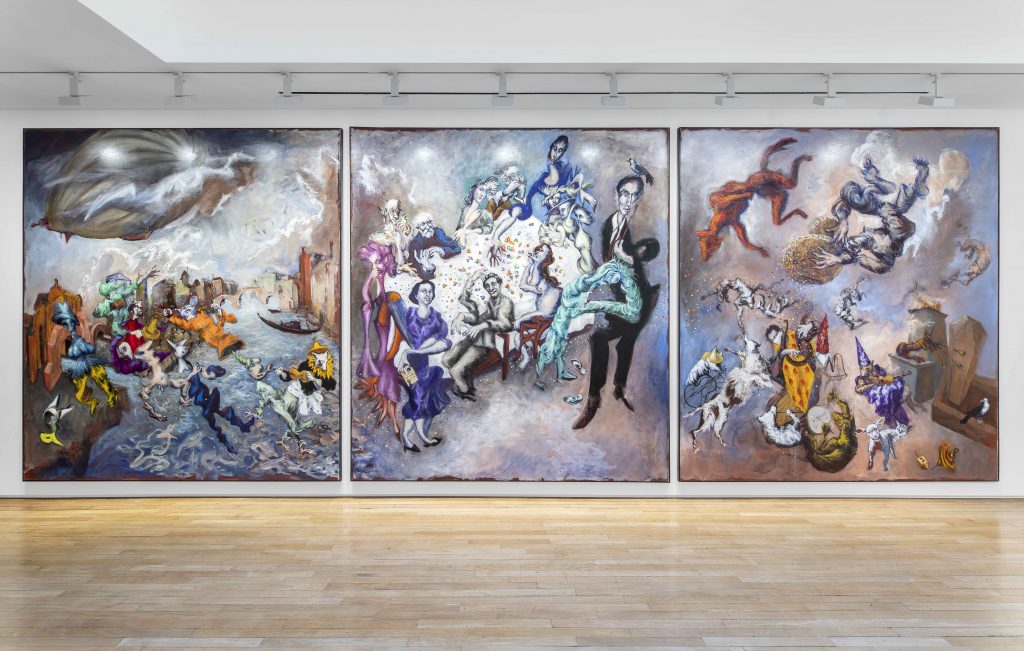 The Banquet, the Carnaval of confettis, 2020,