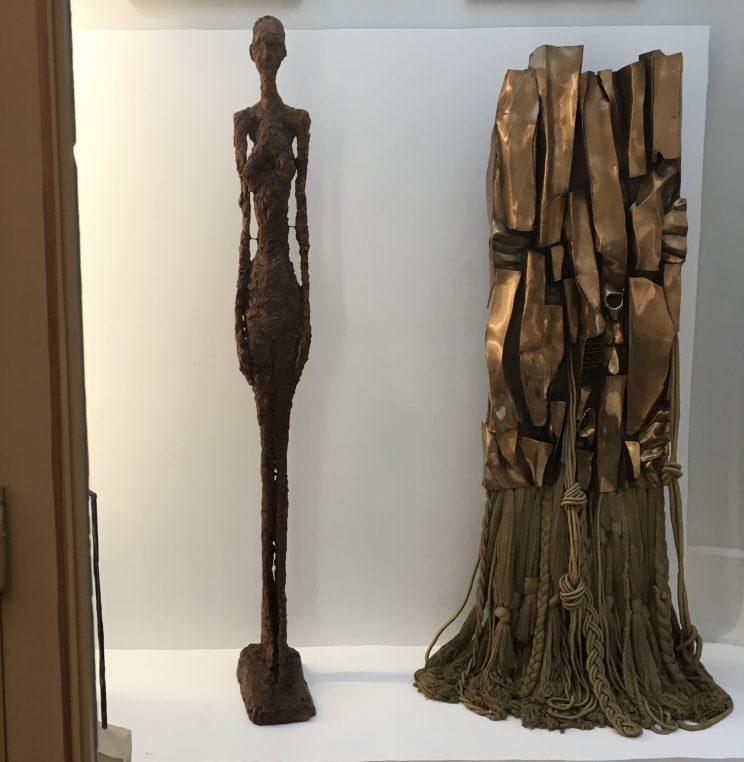 Two exhibitions will lead you to two delightful little museums. One is at Institut Giacometti which you might already know near the Fondation Cartier with sculptor Barbara Chase-Riboud (Marc Riboud’s first wife and biographer of Sally Hemmings) and the second one is at Musée de la Libération de Paris, an interesting historical museum set on the premises of the Resistance’s headquarters place Denfert Rochereau. This one is devoted to Henri Rol-Tanguy (1908-2002), hero of the Liberation of Paris, who was painted and sculpted by Giacometti. Fourty pieces dating from 1946, give a new life to the museum, which is by itself a fascinating visit.

General de Gaulle awards the Cross of the Liberation to Henri Rol-Tanguy on June 18, 1945

In 1946, Louis Aragon is preparing an exhibition brion for Palais de Tokyo called “Art and resistance” and this is probably when he commissioned from Giacometti a portrait of Rolling-Tanguy, hero of the war. Henri Tanguy who carried teh war name of Colonel Rol was a communist resistant tho ran the FFI, French Interior forces, from the very site where the museum lies today on Place Denfert Rochereau. It was based 20 meters below ground and you can visit it and go down the 120 steps to the hidden office. On August 25, 1944, the day of the Liberation of Paris, Général Leclerc stopped by before walking on the Champs Elysées.

The artist was heavily involved in this commission and he delivered 17 small format sculptures and twelve drawings which are shown here. He gives us a true panorama of his esthetic and conceptual experimentations (site 1935) on faces and recreates his vision of the model as he sees it not as it really is. The enthusiasm he felt after meeting the Colonel is well documented. He expresses his admiration fo this “very beautiful head”  and for “his keen intelligence”. 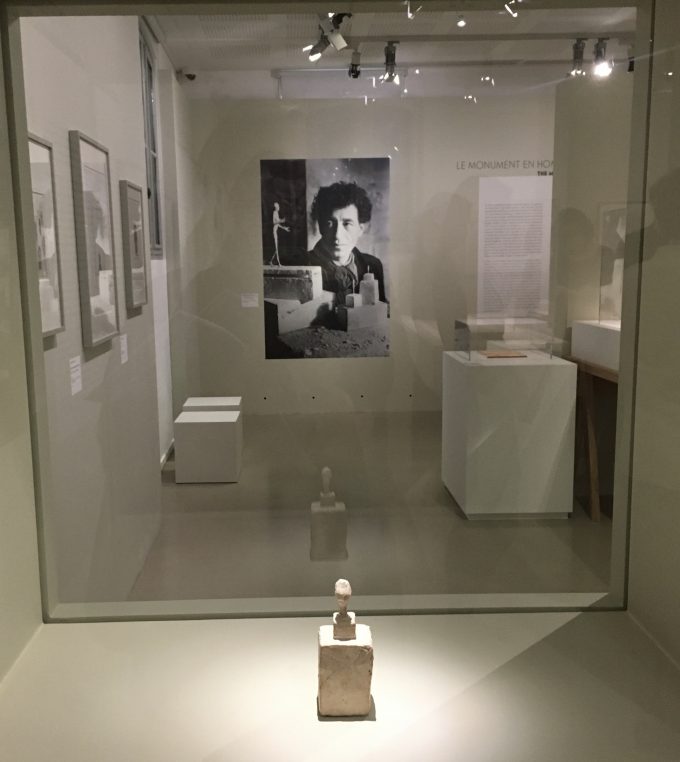 After the war, Colonel Rol-Tanguy remained a fervent communist and because of the Cold War, was stationed in an isolated post in the army in Versailles until he retired in 1962. He died in 2002. His second son Jean (born 1943) was present at the opening and told fascinating stories of how his mother transported guns in his pram.  She actually was present at the inauguration of the Musée de la Libération de Paris in 2019 and died last year. Her important role in her husband’s action was officially recognized at then of the war. 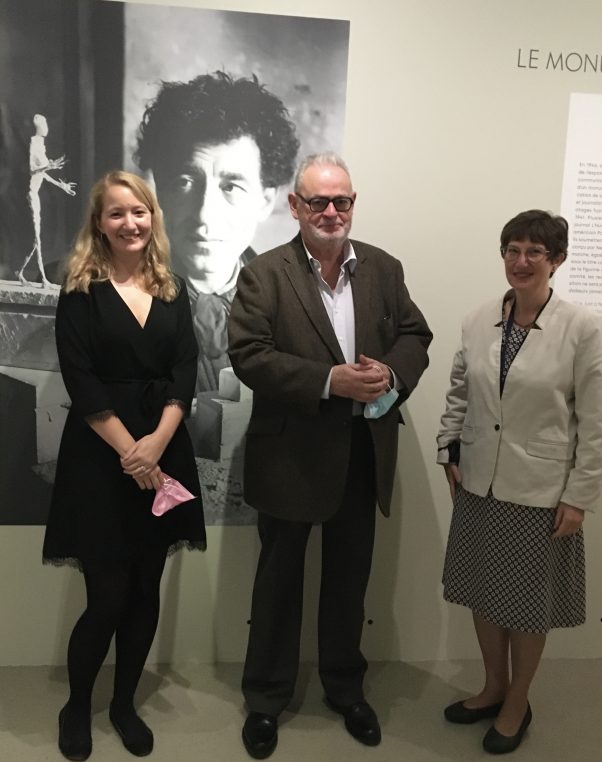 Curator Michèle Kieffer from Fondation Giacometti, Jean Rol-Tanguy second son of the hero and Sylvie Zaidman director of the museum

At Fondation Giacometti, a few blocks away, Barbara Chase Riboud is the hero of a parallel show of her sculptures with Giacometti’s. And the dialogue is successful. Born in Philadelphia in 1939, this sculptor, winter and poet lives in Paris and had met Alberto in 1962. Zanzibar, one of Chase Riboud’s first abstract sculpture (1970) stands next to Tall Woman II (1960) and both works compete in terms of monumental scale. Her walking angel and Cleopatra’s bed in bronze plates are full of poetry and incredible strength. 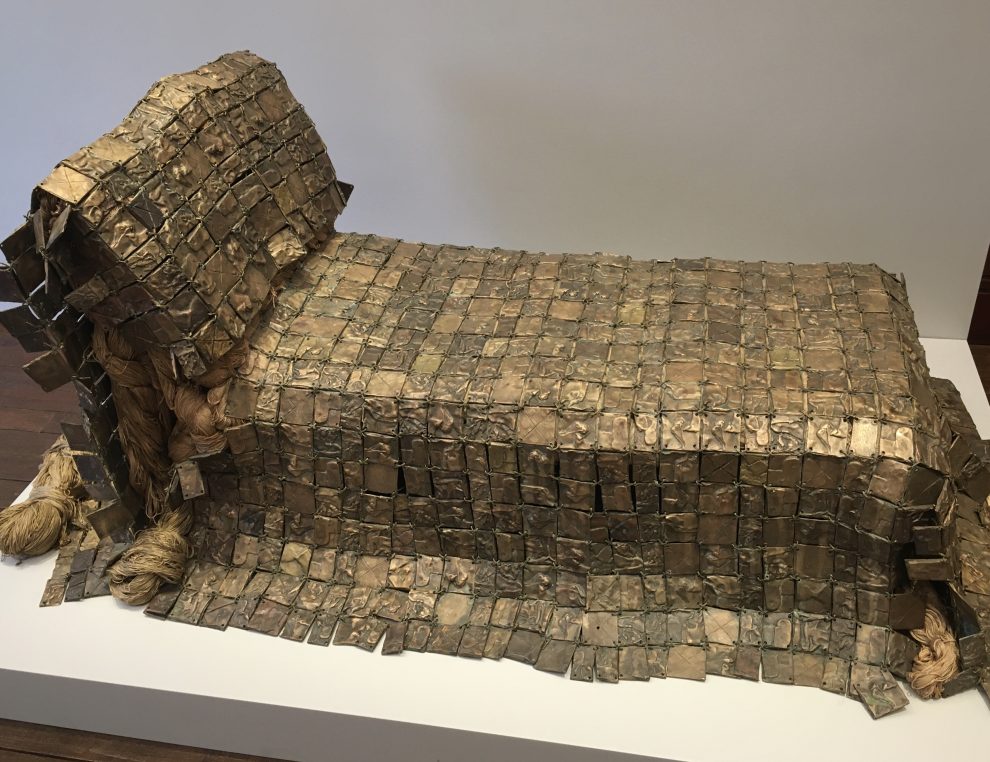 The charming house of the foundation where these sculptures and many drawings are shown, is a perfect frame and both artists’s talent work together. I loved Cleopatra’s bed which is made of an assemblage of tesserae. The Egyptian Queen and powerful African woman is for her a link between East and West.  Like her Giacometti was fascinated by Egypt. They also share a passion for African art and “Spoon woman” (1927) by Giacometti is directly inspired by Yoruba art on the Ivory Coast. 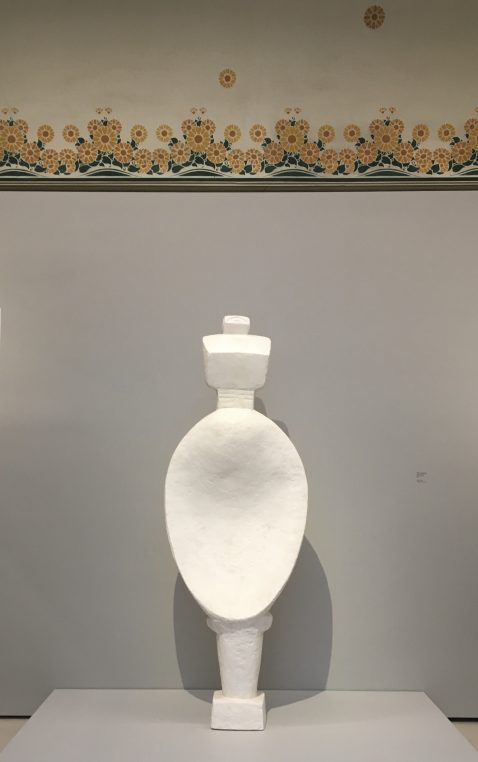 The two show can be seen at the same time as they are very near to each other. Musée de la Libération (until January 30) is full of informations on the day of August 44 when all Parisians celebrated the departure of the Nazis from the capital, the Giacometti Foundation (until January 9) is a poetic studio with fabulous sculptures. You have to book for both.