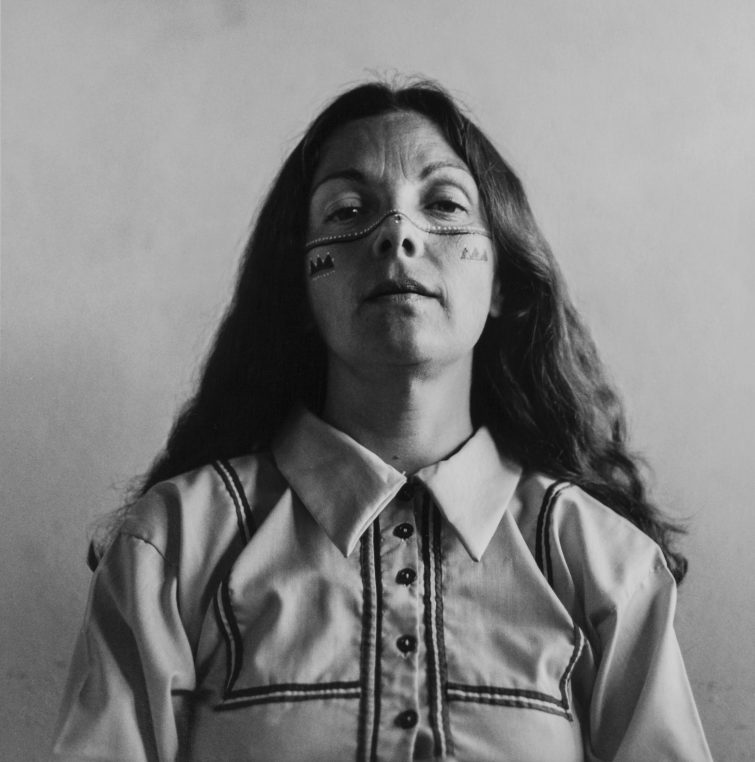 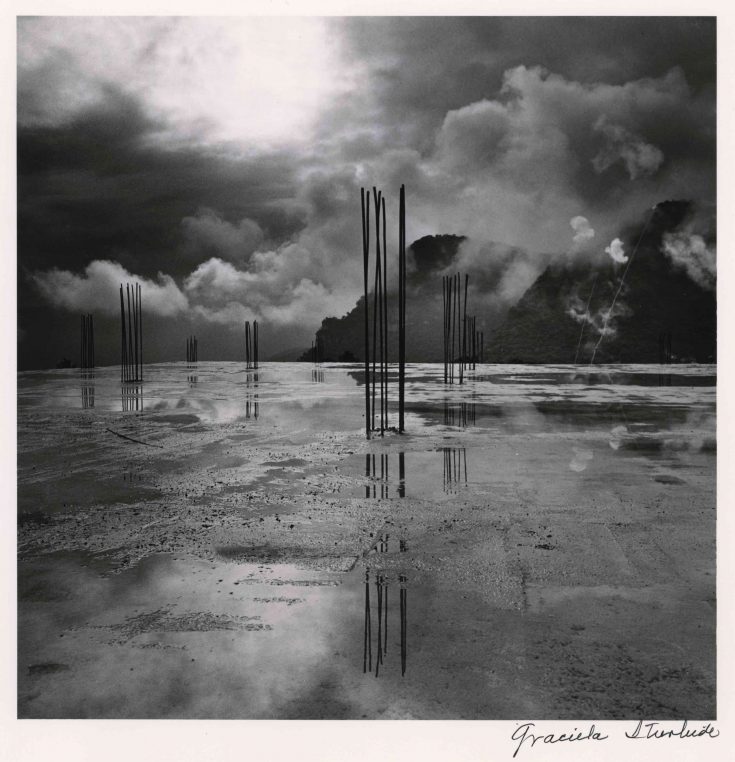 The first pictures I ran into at Fondation Cartier, in the show “Heliotropo 37 ” are of the Oaxaca botanical gardens, a well kept secret which I visited in 2006 with a group of friends. It was being restored by local artist Francisco Toledo who toured us around. He is the same man who in 1979, had invited photographer Graciela Iturbide, a student and later an assistant of Manuel Alvarez Bravo at UNAM, to come and photograph the Zapotec community. She subsequently spent ten years in Oaxaca observing the women of the community. The show of 200 pictures, which runs until May 29, is mostly in black and white, with a few photos shot in color and commissioned last year by Fondation Cartier of alabaster stones in Tecali, near Puebla, Mexico. There are pictures of Rajastan from 1999, from the desert of Sonora near the US border in 1979, from Italy, and Madagascar and an interesting 1986 series of transvestites. But her art resides mostly in picturing Mexican indigenous communities who had not been approached before. 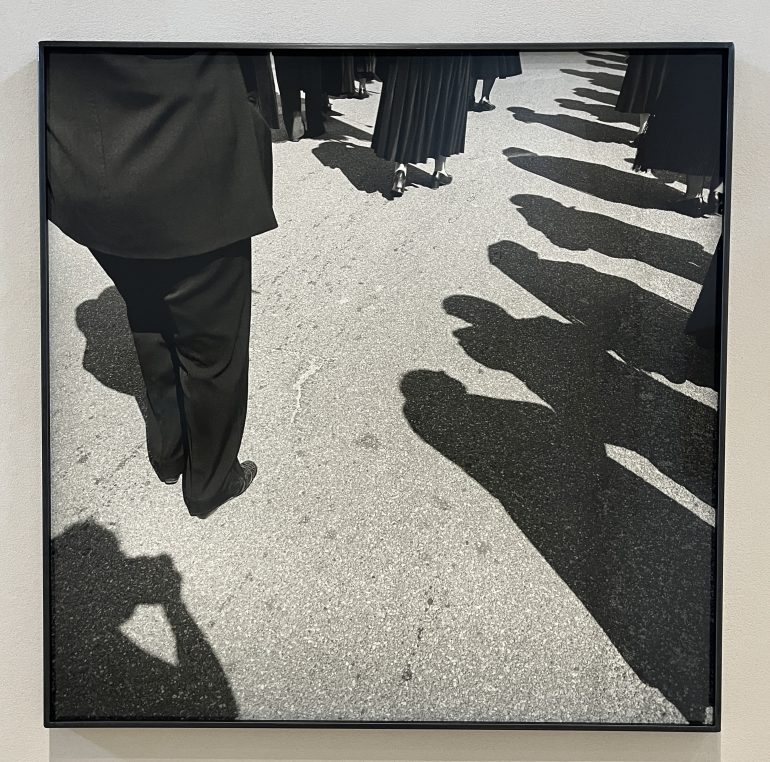 Fascinated by ceremonies and rituals in the Indigenous communities, she studied the “Rapto” phenomenon, in 1986, in Juchitan. “It’s a legendary place : Henri Cartier-Bresson, Sergei Eisenstein, Tina Modotti and Frida Kahlo, all stayed there.” Young girls’ virginity was being checked before getting married in a ritual which is called “el rapto”. Then follow a series of celebrations before the wedding takes place. Earlier in 1979, she had photographed “Nuestra Señora de las Iguanas“, one of her legendary shots which is famous around the world. 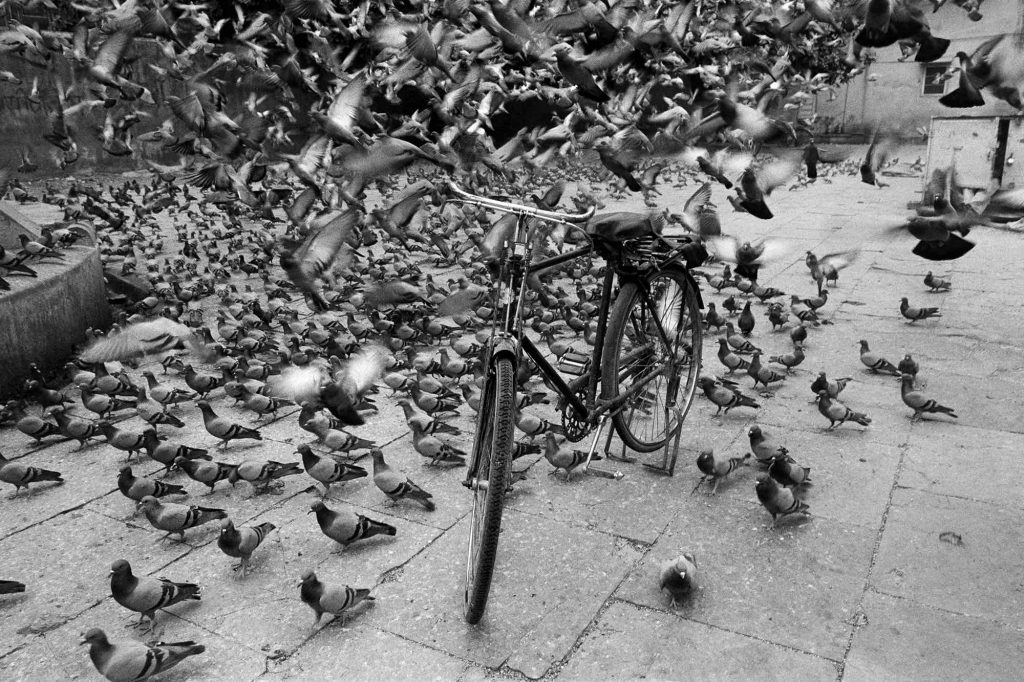 Her son Mauricio Rocha (with architect Manuel Rocha Diaz) took a series of photos of the simple three level brick studio, his first project, which he designed for her in Coyoacan. He has since been awarded many architecture prizes in Mexico, New York, France. This wall of photographs downstairs gives a more human image of an artist who is very austere in her choices and has emphasized the study of people over estheticism. Her other son Manuel is a composer and a sound artist who studied at IRCAM in Paris. She also had a daughter, Claudia, who died at 6, a tragedy which prompted her to become a full time photographer in 1971. 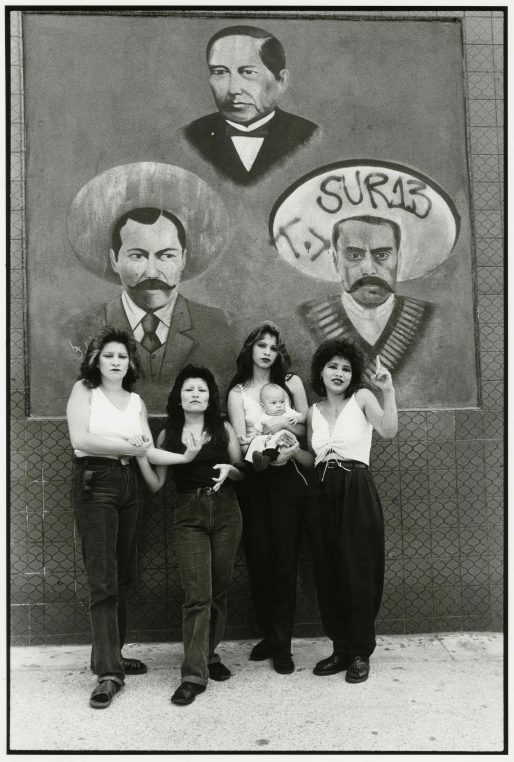 Cholas, White Fence, East Los Angeles, 1986, all thembers of the community are deaf except for the baby

In 1986, she contributed to the publication of “A Day in the Life of America”, a project with 200 International photojournalists who were asked to capture a glimpse of American life with their lens. She made a series on “Cholos”, communities of Mexican origin living in the US, and focused on the “White Fence gang of Boyle Heights” whose members are all deaf. In a  poignant picture she represents four women with a baby, the only one not to be deaf.

In 1991, she won the Prix des Rencontres Internationales de la photographie in Arles. Born in 1942, she is still travelling and was in Paris for the inauguration. 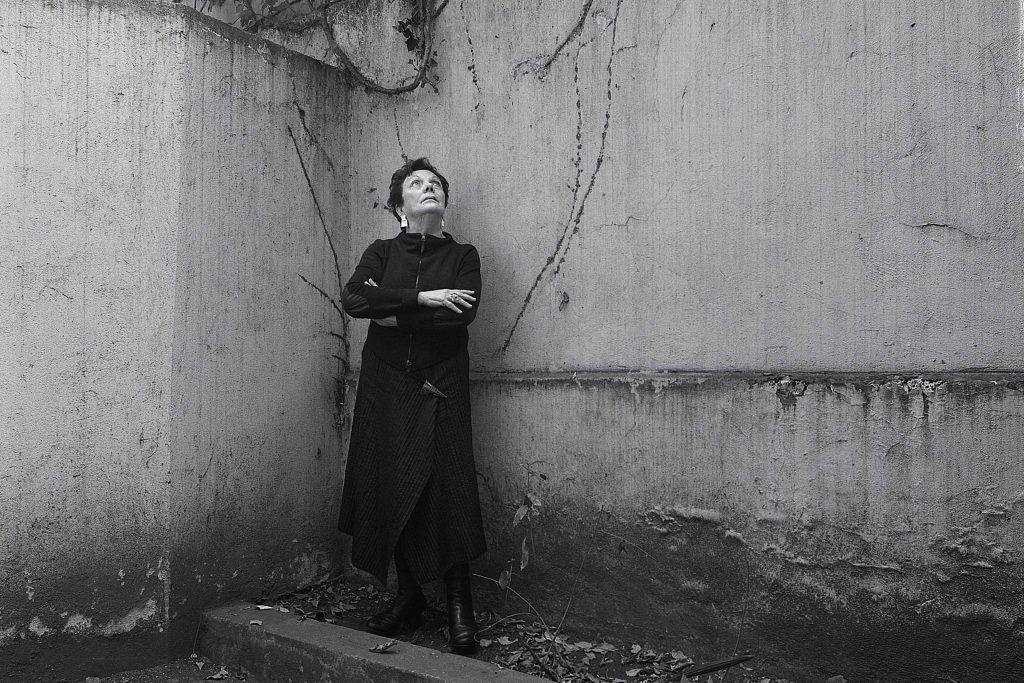 Iturbide exhibited in Paris for the first time at Centre Pompidou in 1982 twenty shots from her series in Juchitan. Later she traveled to Madagascar with “Doctors without Borders” where she photographed women with Aids, made five trips to India but also took the time to photograph Frida Kahlo’s bathroom in Casa Azul, Mexico, which still contained the painters’s personal belongings in 2006. Her pictures of Italy, always in black and white, are perfect to describe the dark Sardinian people and a collection of knifes. 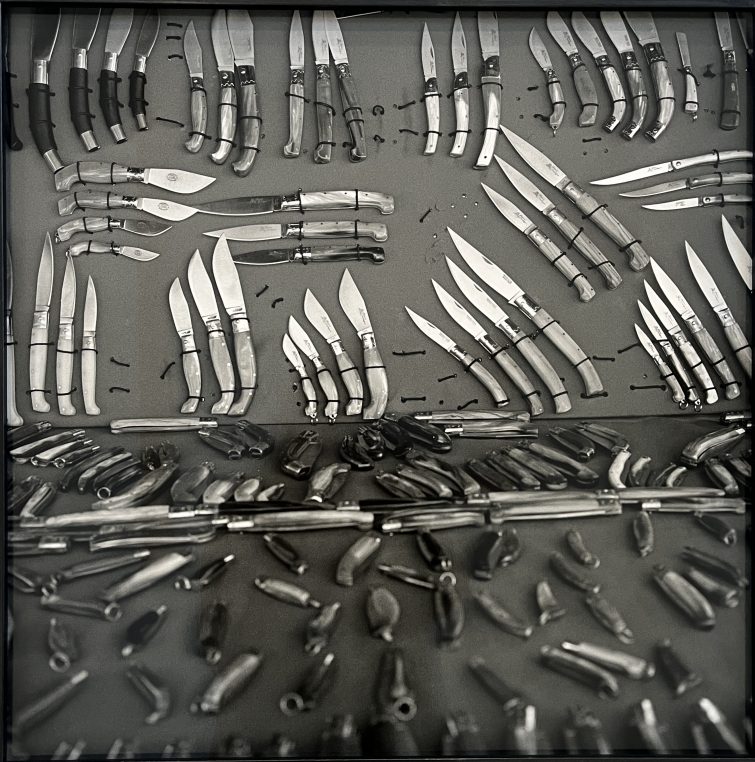 And her Indian pictures are just as strong with Benares the same year 1999, or the botanical gardens of Lucknow. The show is sometimes a little dark and serious but what is interesting is to find color photographs of stones in Tecali, the last series she produced in 2021, and realize that they are just as stern and contrasted as if they were in black and white. She obviously has her own very personal strength. She was received the Hasselblad award in 2008 in regcogniton for her career. The most recent winner is Chilean photographer Alfredo Jaar. 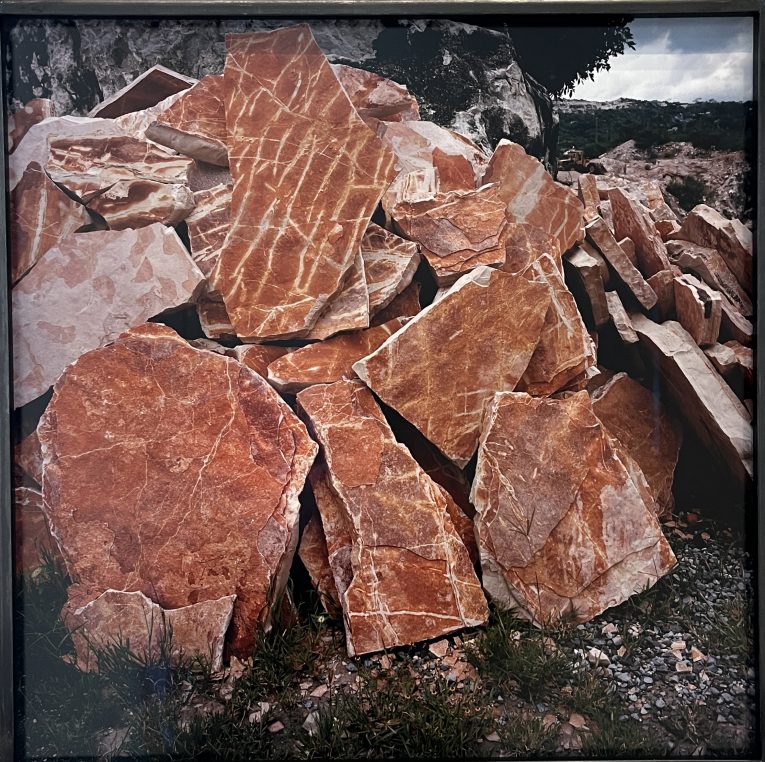 Heliotropo 37, the title for the exhibition, is the address of her studio in Coyoacan. Until May 29 at Fondation Cartier, 261 boulevard Raspail, Paris 75014. A catalog is available for 45€.

One Comment on “Graciela Iturbide, from Coyoacan to Fondation Cartier”