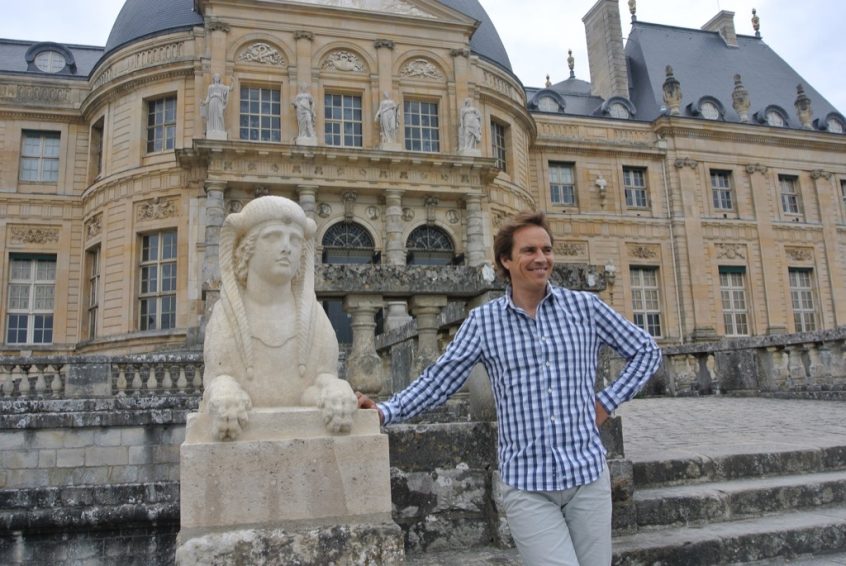 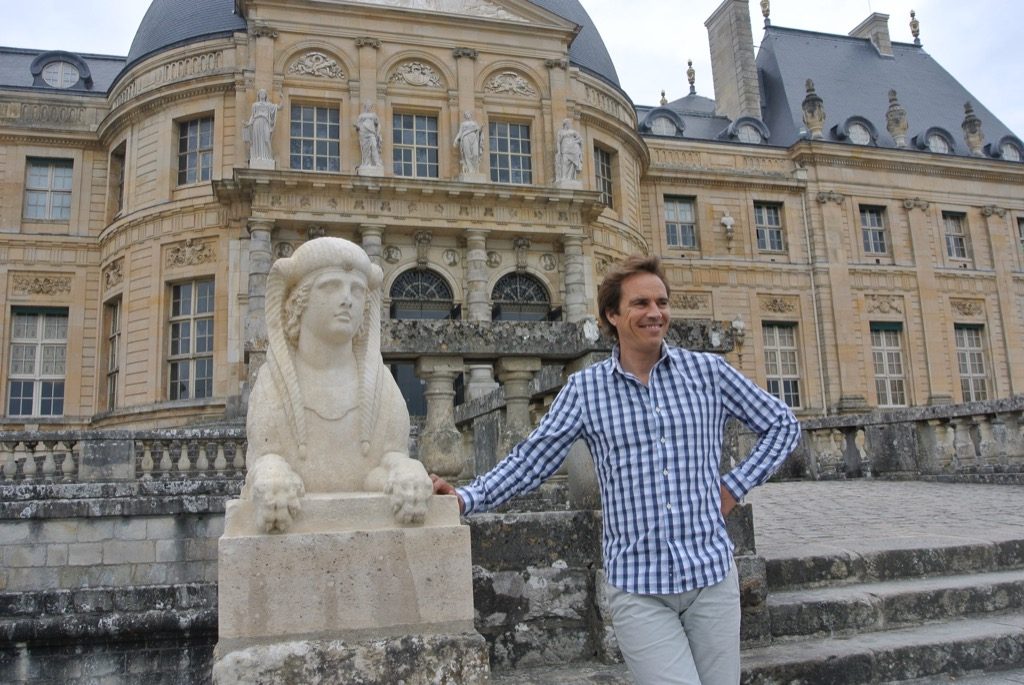 Visiting the gardens of Vaux-le-Vicomte in a golf cart at 9 am, when no one is around but a few gardeners, is probably the most privileged thing I have done for a long time. Alexandre de Vogüé, the second son of Patrice and his Italian wife Cristina, the present owners, is in charge of marketing and fundraising for the most beautiful private castle in France. He leads you around the fountains and the statues of the 33 hectares (70 acres) park with the same intensity that he used to lead mountain climbers on every peak of the globe for twenty five years, in a previous life… With a good sense of humor and everlasting patience. 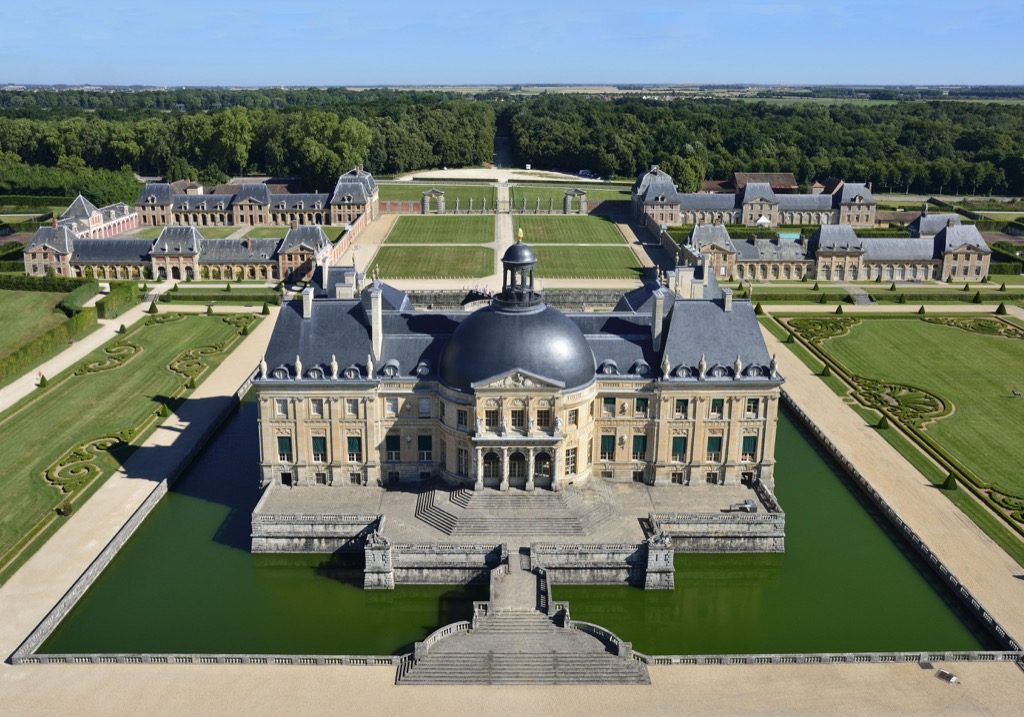 At Vaux-le-Vicomte, castle and garden are all about harmony and perspectives

We first inspected the areas that suffered from the huge May floods, the fallen walls and the overflowing of the Ancueil river which runs east west. Two 17 th century pavilions were damaged and all the walls of the 980 meter grand canal need work. For here, all is about water, and André Le Nôtre redirecting its flow in this magnificent domain located near Fontainebleau, an hour south east of Paris. 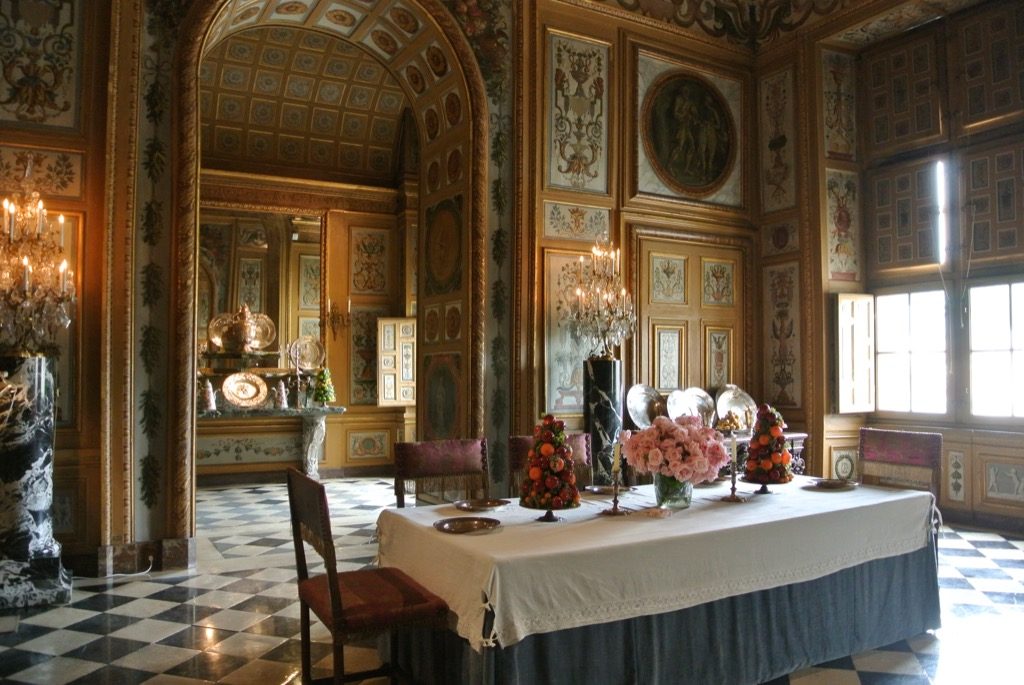 The dining room is warm and cheerful

When Le Vau, Le Nôtre and Villedo (the contractor) were first united in this project by Nicolas Fouquet, one of Louis XIV th most brilliant ministers, perfection was born. Nothing was too big nor too extravagant and last year, the 400 th anniversary of his birth gave way to many artistic celebrations. Paintings are by Charles Le Brun inside the castle. 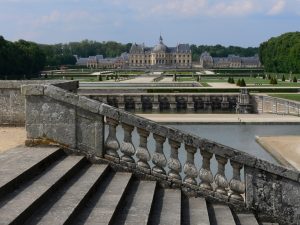 Stairs and high balustrades are designed to fit the perspective

The tragic day of August 17, 1661, when the King (advised by Colbert)  decided to imprison Fouquet who had shown too much lavishness in his regal celebrations, gives its fame to Vaux-le-Vicomte, a perfect example of late 17 th century architecture. Built 50 years earlier than Blenheim Palace, Vaux has the most famous French gardens  studied at length by Vincent Scully and others. 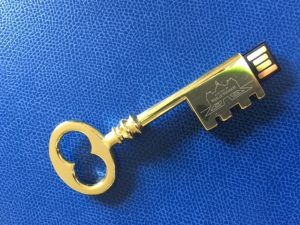 On my way out, I was given the “key” to Vaux

It took twenty years for Fouquet to acquire the land (1 000 acres closed by a 13 km long wall, 4 acres of roofs) and complete this perfect house. 270 000 boxwood plants, hundreds of yards of ash tree hedges, fourteen basins and more fountains and cascades, 75 employees : Vaux is a large company run with passion and graciousness by a family of three brothers who took over from their father, Jean Charles, Alexandre and Ascanio de Vogüé. 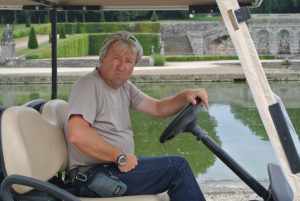 In 2013, hundreds of trees had to be planted after a hurricane and each one has a little stone with the name of its benefactor. The Friends of Vaux-le-Vicomte are very reactive and after each catastrophe, huge waves of sympathy pour in. Many films are shot there, and a few weddings (among which the famous Lakshmi Mittal wedding)  but what sustains the property is really the large public. 350 000 visitors a year come to search Easter eggs, or to listen to winter tales at Christmas. 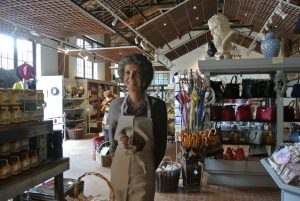 Scientific lectures on Le Brun or candle lit Saturday evenings (they attract an average of 1700 guests) with champagne bars in the garden all summer long (until October 1) provide refined moments. A costumed lunch in June and children related activities, all add to the fun of the visit. There is nothing fake about it: a real castle with a real head gardner and real aristocrats still living in one of the wings, are a nice change from Disney world . 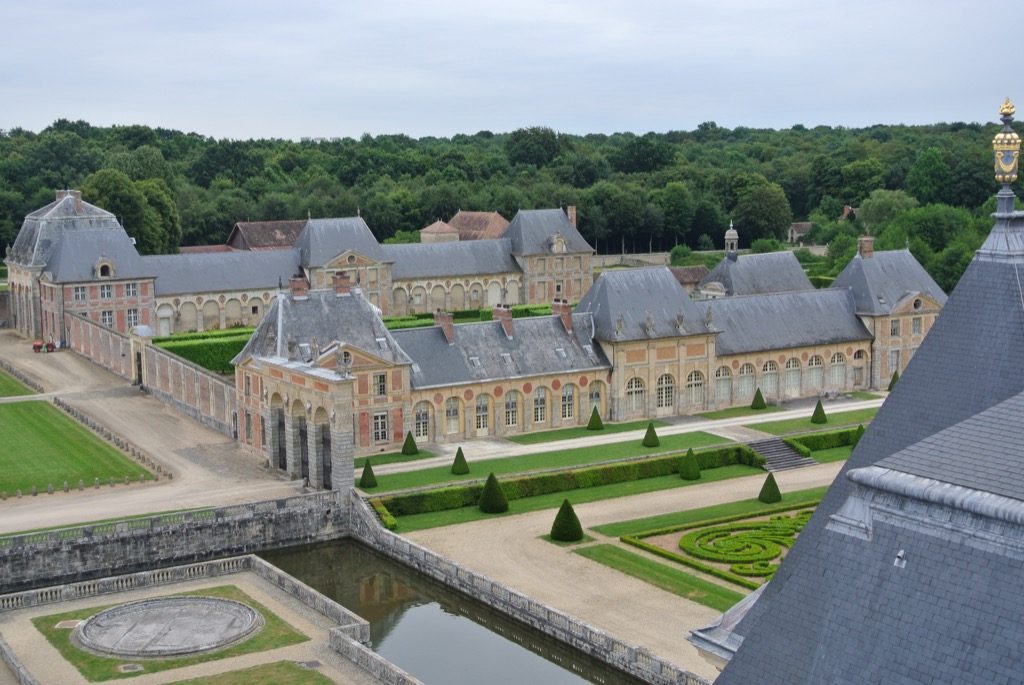 The family lives in this brick and stone wing

What struck me the most during my four hour tour, was that everyone tried to make you feel at home. There is something about privately owned castles that keep the intimacy and the chic and share it with visitors who all (including small children) behave respectfully. The guards are extremely smiling, (Claire gave a brilliant structure of the roof structure), the head gardner, Patrick Borgeot was helpful and relaxed (he is a Bruce Springsteen aficionado), and our host was endlessly interesting about the changes made by garden designer Achille Duchêne in the early 20 th century and Louis Benech’s help more recently. For there is a true scientific concern for planting species the way they were in the 17 th century.

I love this Parterre de la Couronne which the King could see from his bedroom, photo Chicurel

The « perspective ralentie » is one of his big themes : from the castle you think that Hercule is not that far away and when you decide to walk to it, it takes you close to an hour. It will soon be guilt again thanks to an American benefactor. The way le Nôtre drew the different terraces and stone versus hedges, shortens the perspectives. The movements of the ground helps discover new fountains and basins.

A view of the castle from the statue of Hercule, which is soon going to be guilt, Photo, Béatrice Lécuyer-Bibal

The visit of the castle in two different stones, with its fabulous furniture bought back by Patrice de Vogüe and his great uncle Edme Sommier, culminates under the dome where the wooden structure of the roof made in three essences, is spectacular. It is worth paying an extra 3€ to climb on top and get the view from the newly renovated dome. Oak, chestnut and pine woods all have their particularities and create a true chef d’œuvre.

There is a very special warmth in this majestuous castle and one feels totally happy from it. As our host was saying, every single room of the castle is open to the public. From the kitchen to Fouquet’s bedroom. During the first world war, Germaine Sommier whose husband had bought the castle in 1875, converted the outhouses into a hospital. The pictures are shown in the attic and are quite striking.

We ended our day with a simple pic nic at the Kiosque, facing the castle, which serves sandwiches and ice creams. It is well worth renting a little cart to drive around canals and cascades. Alexandre de Vogüé dreams of creating land art on both sides of the main garden, a reason to go back in a few years. Until then, many clever entrepreneurs organize their company lunches and dinners in the gastronomical restaurant les Charmilles and foreign travelers make Vaux an obligatory stop, on their summer North-South drives.

There is something about this family of Franco Italian Vogüé, that is very special and the visit was quite enchanting. (Vaux is accessible by train from Gare de l’Est in Paris to Verneuil l’Etang where a little bus takes you to the castle in 15 mms. www.vaux-le-vicomte.com)

9 Comments on “A great Alexander at Vaux le Vicomte”