Three years ago, Gustave de Staël had already shown his drawings with his wife Elena Prentice at Galerie Documents 15. He is back with views of Tangiers, more mature and assertive, with a mix of city and nature topics. His pen is dynamic with broken strokes and he draws very oniric  landscapes. There is no realism there but one can imagine one’s own landscape with moving shapes and contrasted shades. Country, cities, forests, appear like a reinvented world full of poetry. I particularly liked his constructions in “Coup de Vent” (blowing wind) and “Turbulence” where strokes of ink go wild.

The atmosphere at the opening was jolly since Gustave de Staël (Nicolas de Staël’s son) has lived in Paris on and off all his life. He now resides more permanently in Tangiers where he used to run the five French Institutes in Northern Morocco for the Foreign Office and organized an annual Book fair and produced many theatre projects. He now runs a publishing house, Editions Khbar Bladna, with his wife Elena, and keeps curating shows of his father’s paintings around the world. 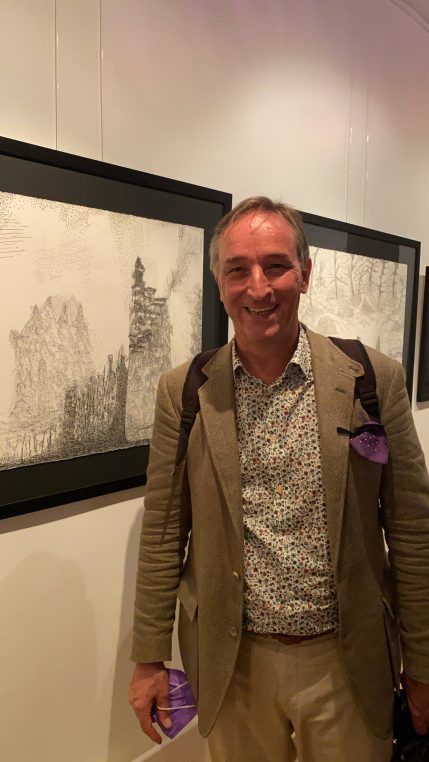 He also works in Ménerbes, in Provence, where he has a studio and where his son Lucas was raised. This is his fourth exhibition at galerie Documents 15, which is open until November 20. 15 rue de l’Echaudé, Paris 6.