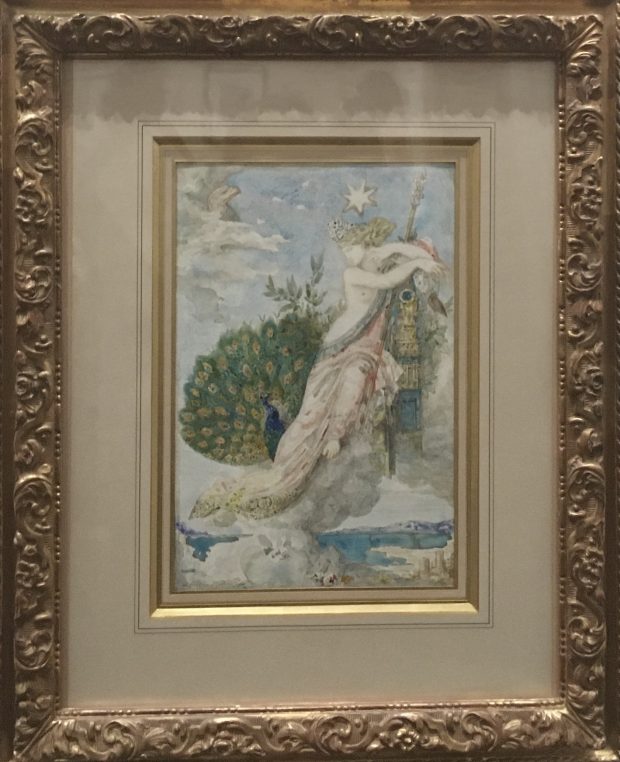 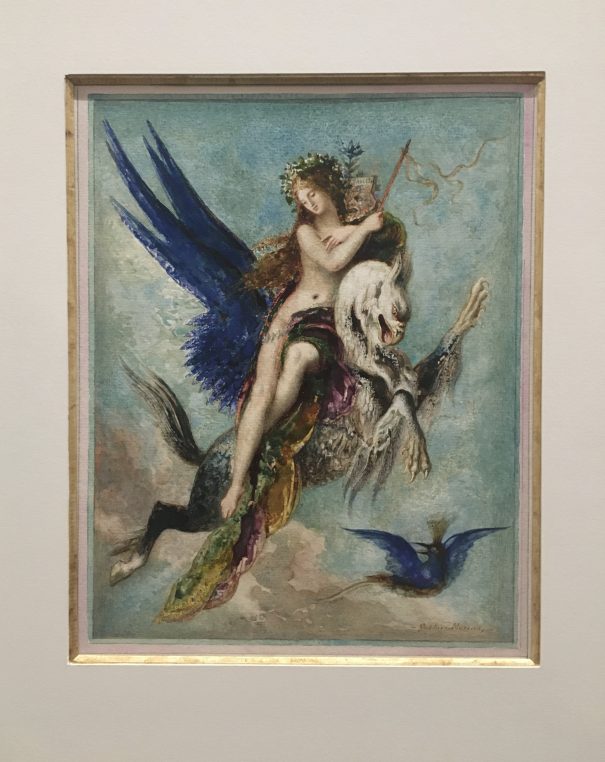 Musée Gustave Moreau can be a bit dreary at times with its dark 1860 studio and huge canvases, but the exhibition of the symbolist master’s 34 watercolor illustrations of Fables de La Fontaine curated by Dominique Lobstein is a pure moment of magic and poetry. It already was shown at Waddesdon Manor, in Great Britain, the summer. Designed by Hubert le Gall, who had the idea of framing each preparatory drawing or final watercolor in coded colors, the exhibition gives a light touch to the sanctuary. There were originally 64 watercolors commissioned by collector Antony Roux between 1879 and 1884 which were painted in the very premises of 14 rue la Rochefoucauld, where we see them. 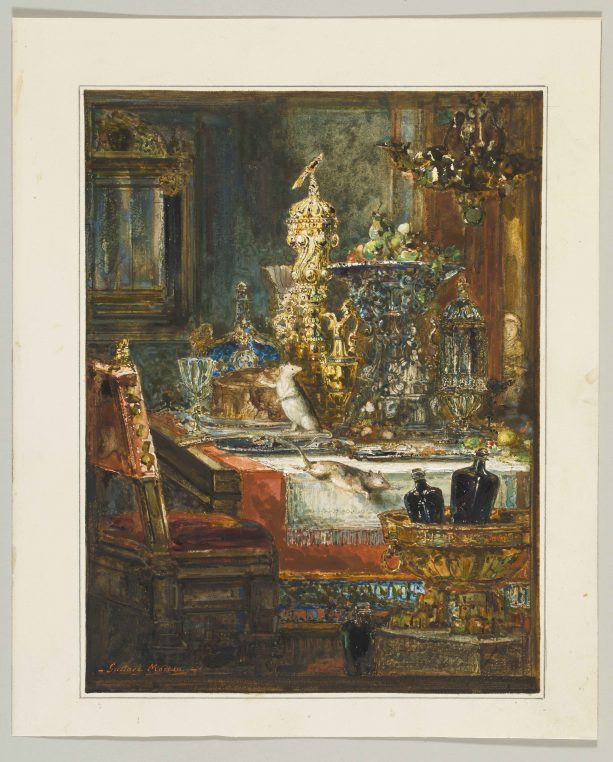 They are an exquisite mix of animals reproduced from live at the Museum of Natural history, many objects and accessories from the Louvre and the painter’s favorite themes of ladies and nature. The collector and the painter had a very intimate relationship which was transferred to Rodin when Moreau died in 1898. After Antony Roux’s death, the collection was bought by Miriam-Alexandrine de Goldschmidt-Rothschild in 1914. During WWII, twenty five fables were looted by the Nazis and they have not been found since. 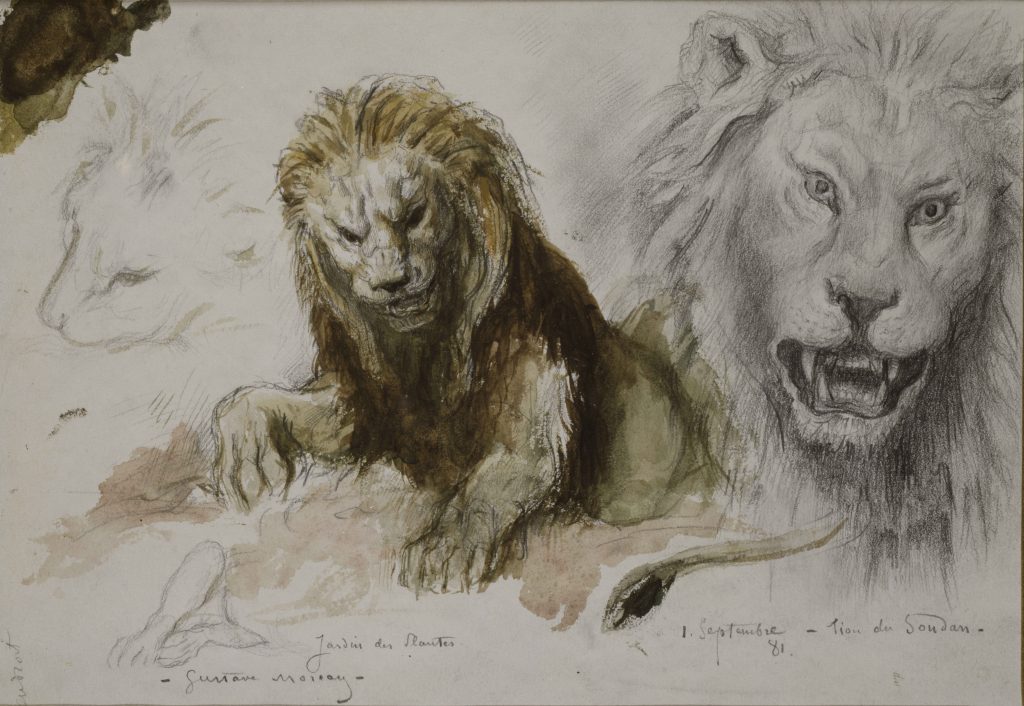 Study of lions for “The Lion and the Rat”, 1881, Musée Gustave Moreau, © RMN-GP / René-Gabriel Ojéda

A black and white book of the Fables, illustrated by Gustave Doré,  had been published by Hachette in 1868 and Antony Roux expressed the wish to publish a unique book for himself with Moreau’s watercolors. These would be exhibited in Paris and in London in 1886 and one last time as a whole, by Robert de Montesquiou and Elisabeth Grefulhe in the posthumous exhibition in honor of Gustave Moreau in 1906. The curator of the show, art historian Dominique Lobstein, had already worked on these fables twenty five years ago and was one of the rare specialists to even know about them since they were dispersed during the war. He is well known for having curated many exhibitions at Petit Palais and Musée d’Orsay, and Peter Krøyer most recently at Marmottan. His erudition equals the charm and simplicity with which he presents the exhibition. 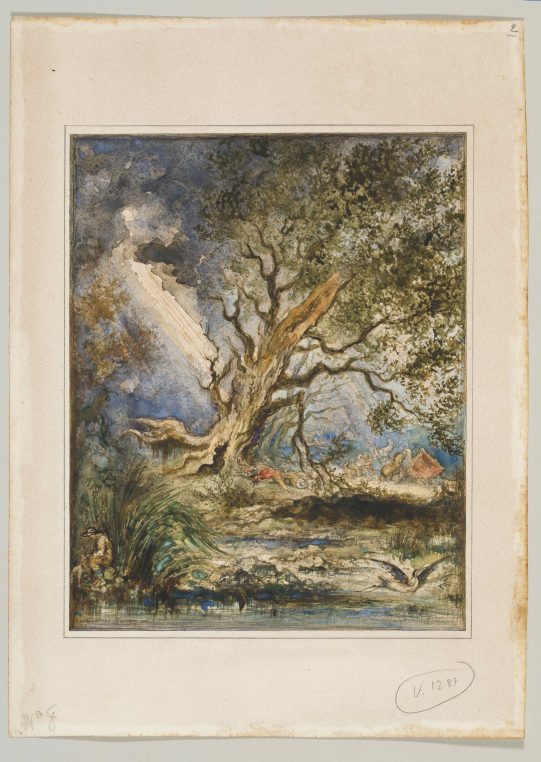 Each fable was chosen by Roux and many letters were exchanged between Marseille where he lived and the artist in Paris, with iconographical suggestions and diverse recommandations. Moreau studies at Bibliothèque Nationale, at the Jardin des Plantes’s library and Ménagerie (zoo),  where he draws prey birds, turtles, ducks, but also elephants, lions and monkeys. A colibri is often present on the lower side of the watercolors featuring a kind of signature. Each delivery and sale was noted by Moreau’s mother with the amounts of money paid. Roux writes about the frogs which he has delivered to Moreau for “The Frogs who request a king” (1884). The shorter of the fables in 8 lines, “The Fox and the grapes” is illustrated here with a church in the background and one of the prettiest is “the Rat and the Elephant” featuring the famous elephant “Bangkok” from Jardin des Plantes. 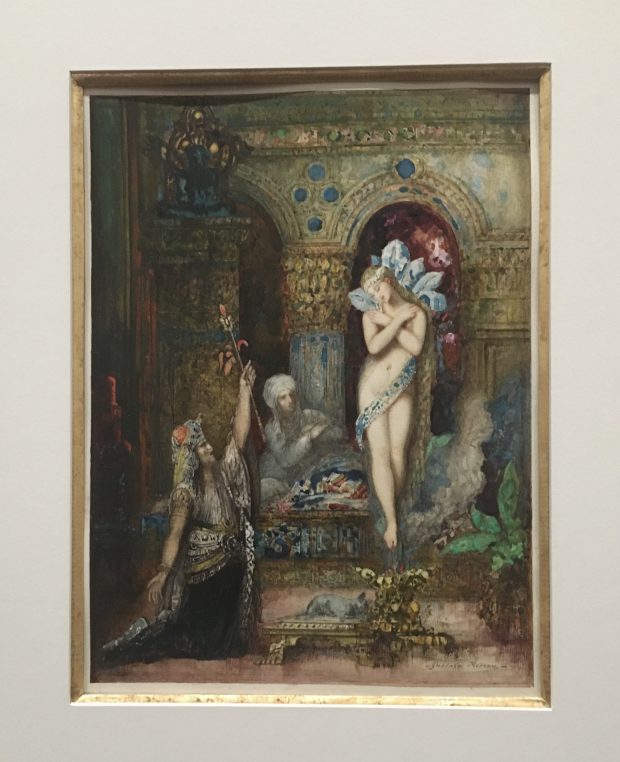 “The mouse metamorphosed as a girl”, 1880, private collection, was inspired by an illuminated Indian manuscript called Pañchatantra.

Some of the preparatory drawings are also interesting like a sketch of lions on September 1881, or the wolf and the lamb.

The exhibition is open until February 28 at Musée Gustave Moreau, 14 rue de la Rochefoucauld, closed on Tuesdays. A catalog is published (39€) and the Fables illustrated by Gustave Moreau in French and in English (15€). Jean de La Fontaine “Le poète et le roi” by Marc Fumaroli was published in 1997 by Editions de Fallois.