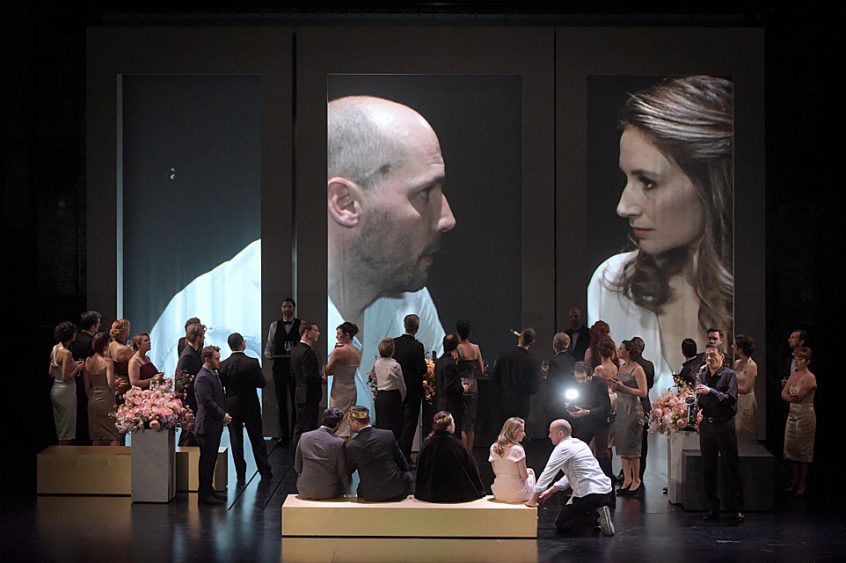 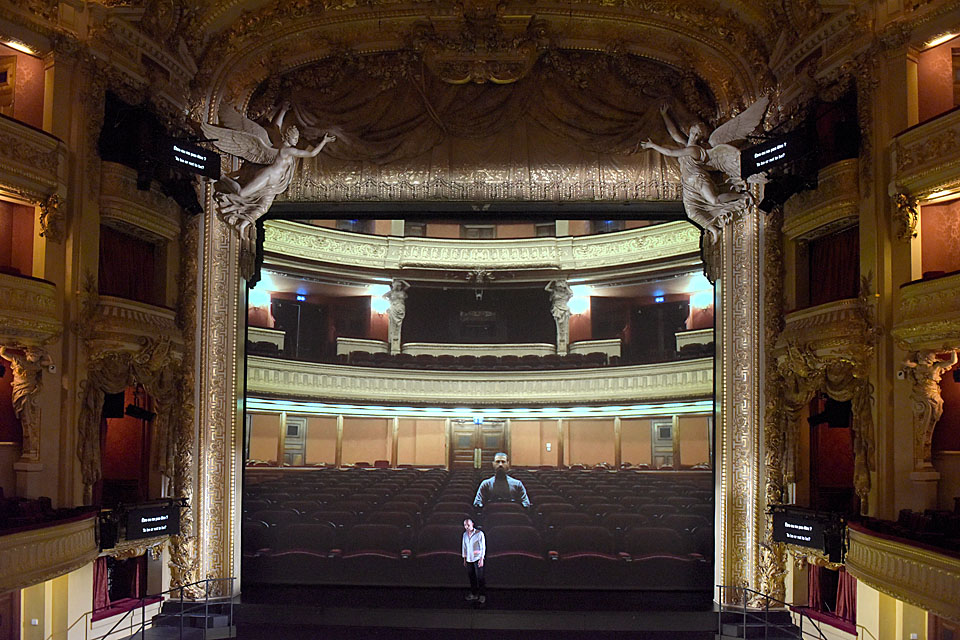 Stéphane Degout as “Hamlet” with his father’s ghost, Jérôme Varnier, in the back, photo, Vincent Pontet

I usually dislike large videos taking over an opera stage but I have to admit that with “Hamlet” by Ambroise Thomas (1811-1896) at Opéra Comique, Cyril Teste has directed a masterpiece and with Louis Langrée‘s great conducting and Stéphane Degout as Hamlet, Sabine Devieilhe as a sexy Ophelia, the evening was overwhelmingly successful. It feels so good to be at a live performance of such high quality again. 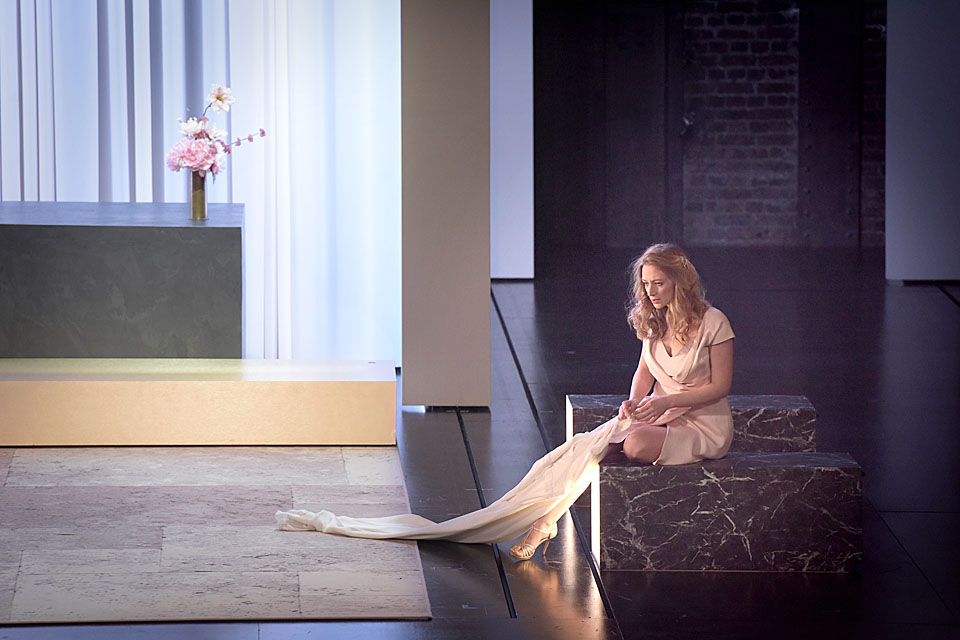 The ravishing Opéra Comique was full of young people who had been attracted by the rejuvenated 19 th century work created in 1868, whose music I had never heard before. It is well known for its avant-garde arias, the first saxophone solo played in an opera (here performed on stage by Sylvain Malézieux at the 90 th minute) and the optimistic change the librettists made in having Hamlet reign over Denmark at the end instead of dying. The curtain opens on a screen with titles as if we were at the movies. Claudius is being made up for his coronation during the overture, and a cameraman is filming live, there are photographers and a red carpet. One feels like being at the Cannes Festival not in Elseneur. But everything is quick and so well set that it’s truly fun. 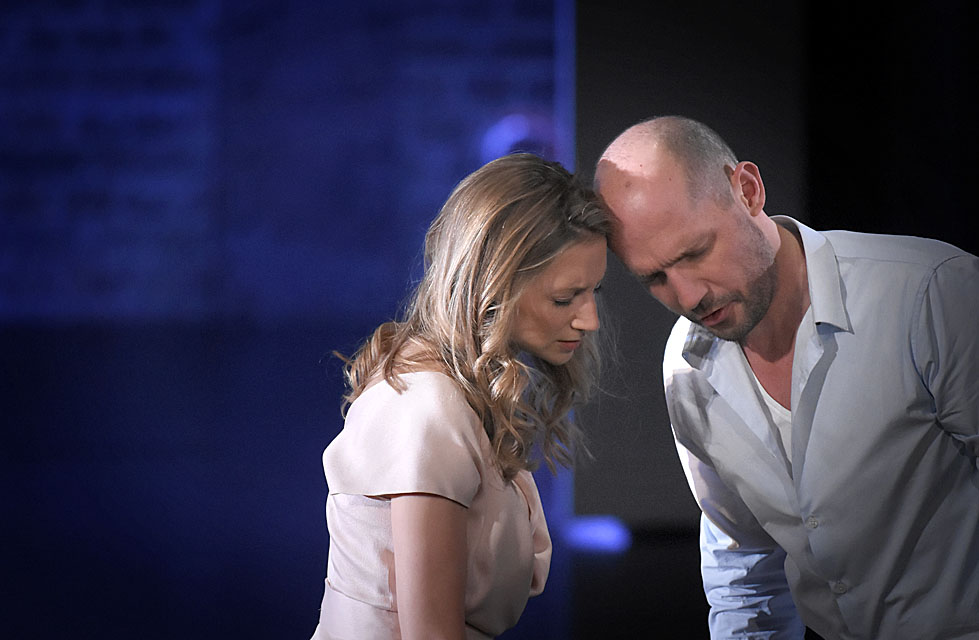 This new production was first staged in 2018 as a collaboration with the Beijing Music Festival and it was a huge success from the start. Ambroise Thomas composed it for the Garnier Opera a year after Verdi’s French version of Don Carlos and it would be played 276 times before his death. With “Mignon” inspired by Goethe, it is his most popular work. The two librettists, Michel Carré and Jules Barbier, wrote simultaneously a libretto on another Shakespeare work, “Romeo and Juliet” for Gounod. This gives you a good idea of the times’ fashion…

Cyril Teste, the director, chose to put forward a sentimental Hamlet within the political fresco and since I am a “midinette” it worked well for me… Ophelia is very sexy and charming, the ghost (Jérôme Varnier) equally attractive. Ophelia’s long solo in the second act was magnified by a video shot of her and Gertrud’s part was excellently sung. The chorists looked very dramatic with their black masks. 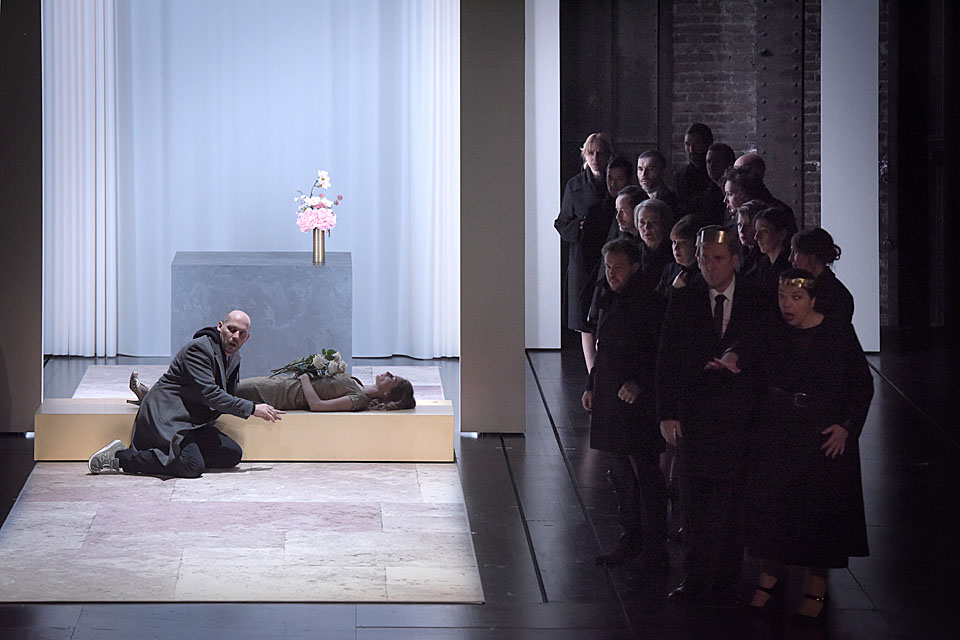 Ophelia’s funeral, with Hamlet and the court ,photo Vincent Pontet

Last Monday at the première, Lucile Richardot, Queen Gertrud, was replaced by the excellent mezzo Géraldine Chauvet  and all singers were applauded at length including Yu Shao (Marcellus), Nicolas Legoux (Polonius) or Pierre Derhet (Laërte). At some point in Act II, the choir of comedians came through the aisles of the theatre singing literally in my ear, before getting drunk in a bacchanal feast. The work is very romantic as Louis Langrée points out in the program: “Ambroise Thomas, son of the Empire and grandson of the Revolution”, is part of this generation of romantic poets and writers who identified with Hamlet like Delacroix or Berlioz and Baudelaire. Ingres was also  an important influence on the musician. 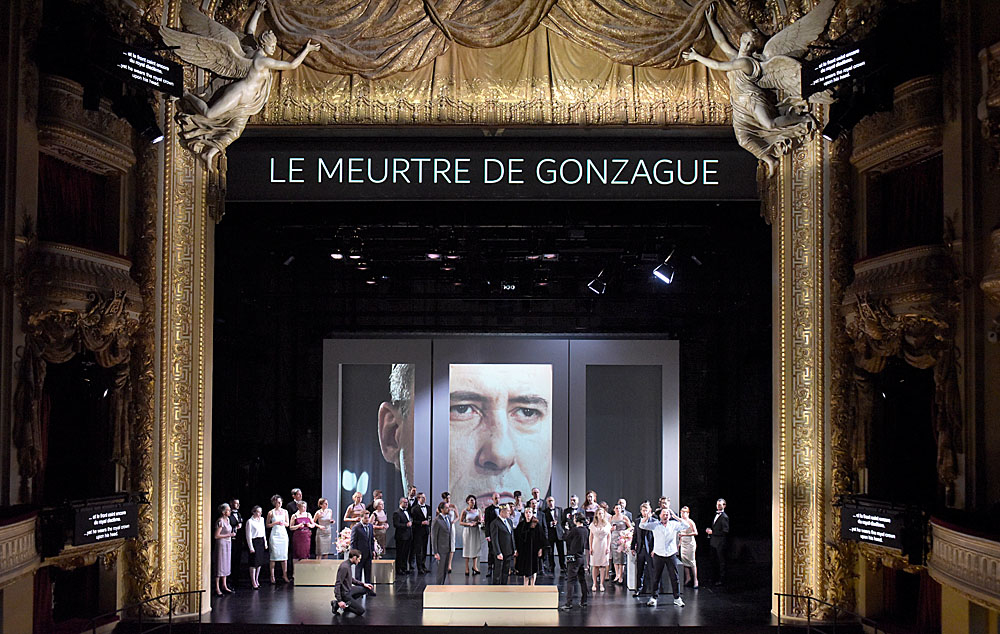 The decor with a video in the back photo Vincent Pontet

Hamlet is constantly wearing a loose shirt and sneakers but for some reason it did not irritate me…His solo in Act 3 is fantastic and he was applauded for a long time. The camera on stage and off is very efficient and its slowness reminded me of the art videos by Bill Viola discovered at the Whitney Biennale in 1981…

The saxophone solo, followed by a clarinet and a trombone solo are all important moments of the evening. At 60, Thomas succeeded to Auber at the head of the conservatory of music and did not hide his preference for Verdi over Wagner whom he considered as too German after the 1870 defeat. 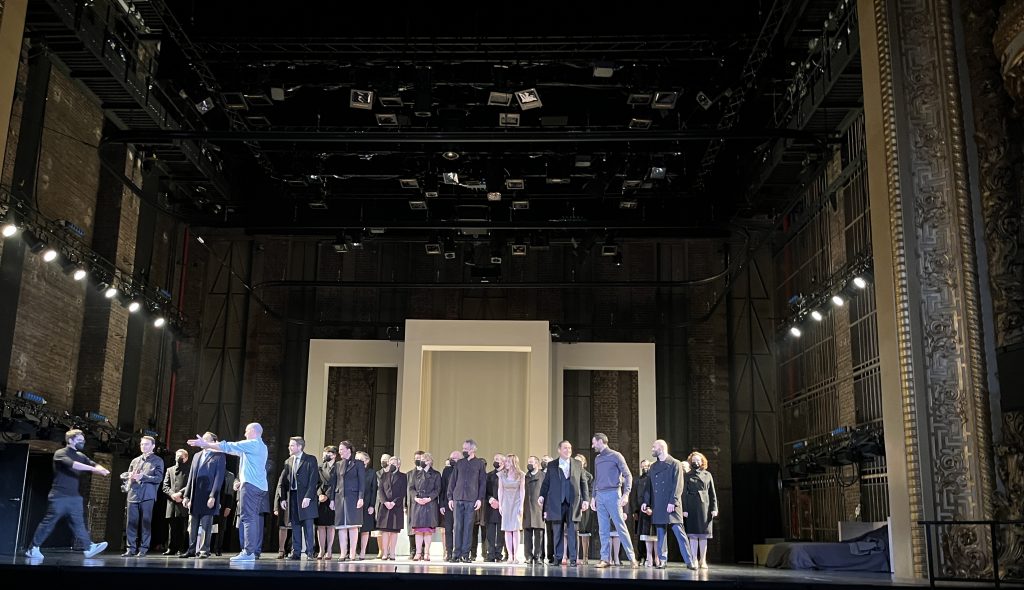 Stéphane Degout welcomes Cyril Teste on stage at the Première

The evening was a pure delight and if you can try to catch the production which goes on until February 3 at Opéra Comique. The opera is in French with English subtitles.

5 Comments on “Hamlet by Ambroise Thomas, a true discovery!”