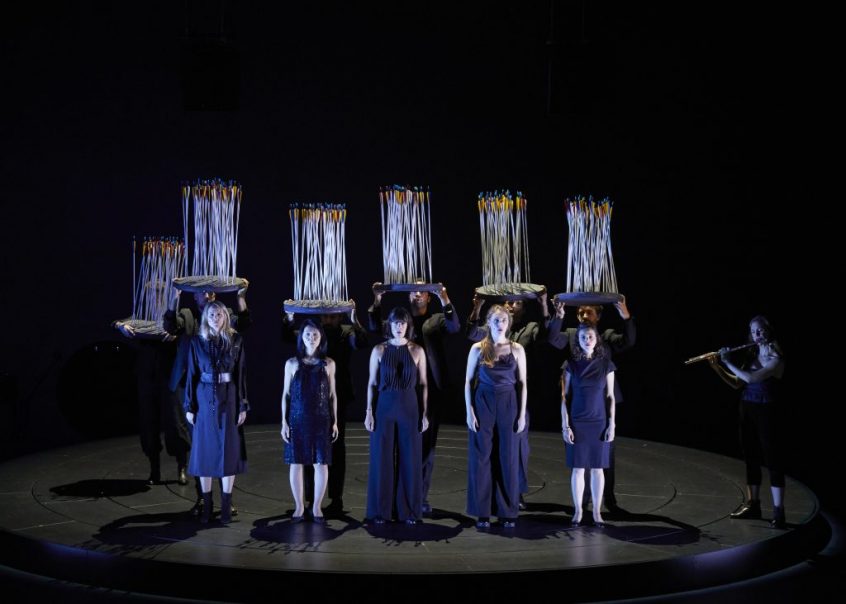 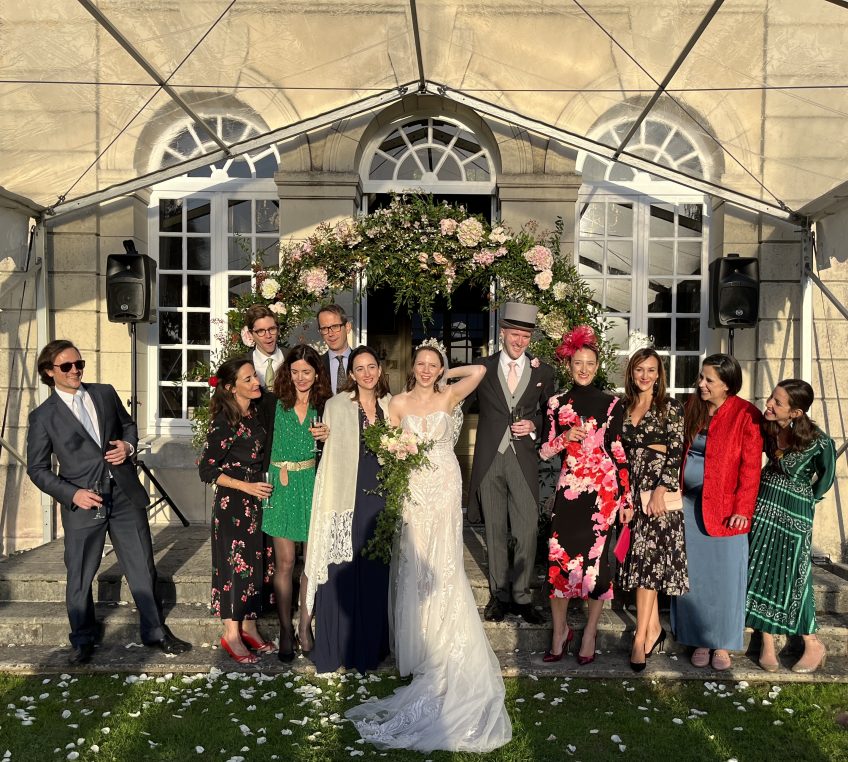 The event of the week end for me was of course the wedding of my niece Alix de Gramont, an organizational change strategist, who lives in Brooklyn but chose with her husband Matthew Inman, a music critic and writer, to come to France to tie the knot or seal the vows…as you wish.  The French American ceremony was intimate in the garden of the family house with lots of cousins and children running around and a perfect evening organized by the good fairy, Fabienne de Sèze. 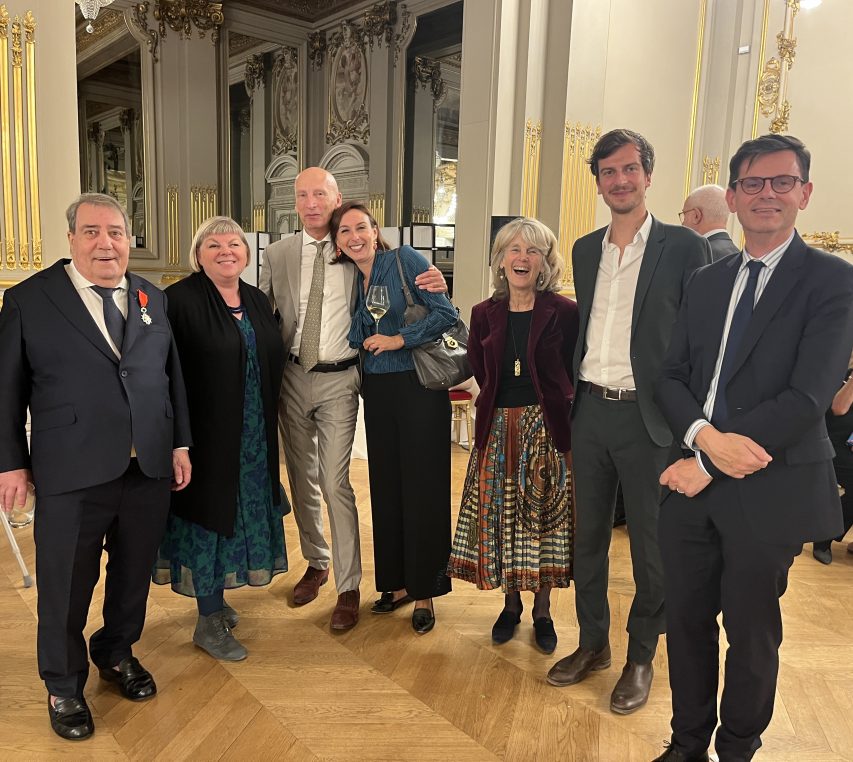 Daniel Marchesseau deserves ten pages in this  blog but his modesty will accept only a few lines. He was honored with the Legion of Honor last night at Musée d’Orsay, and I wanted all of you to know immediately. Christophe Leribault, the President, spoke first and introduced Laurence des Cars, his predecessor, who now runs Musée du Louvre and who awarded him the red  medal. Daniel’s speech was a perfect, long, and always fun, description of his amazing career at Museum of Modern Art, Museum of Decorative Arts, Musée de la Vie Romantique, Fondation Pierre Giannada, Musée Marie Laurencin in Tokyo… He quoted every single artist and curator who played a part in his life and was very moved when mentioning his parents who had both been deported to Germany for the part they took in the Resistance. His twin brother, Gérard was present, as he always is in his daily life. 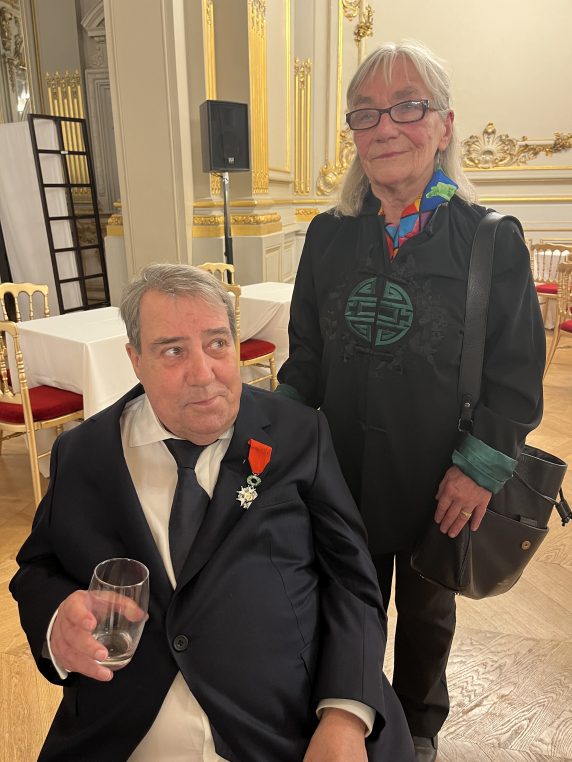 His faithful friends, François de Ricqlès, Leonard Gianadda, Philippe Costamagna, Guilhem Scherf, Emmanuel Ducamp, were all present as well as Pierre Rosenberg and Jean Pierre Meyers, and so many more. The women of his life were all there, collector Solange Thierry who ran the Friends of Musée de la Vie romantique for ten years, Fabienne de Sèze, Isabelle Baer, Sophie Eloy and Carole Blumenfeld, the expert of Marguerite Gérard, was represented by her beautiful daughter, the youngest guest of the evening. The atmosphere was both very official and totally relaxed, only very close friends were invited and everyone felt privileged and loved.

Daniel Marchesseau has always helped young curators with his knowledge and culture and Olivia Voisin, from the Orléans Museum and Matthieu Deldicque from Chantilly were there to testify. Mitchell Wolfson, the genius creator of the Wolfsonian Museum in Miami and the Wolfsoniana in Genoa, gave a very moving speech on Daniel’s International celebrity and his ability to educate everyone in art history. His generosity in sharing information and contacts is legendary and he has recently sold his collection of Lalanne sculptures to fund the new research center of Musée d’Orsay which will bear his name. 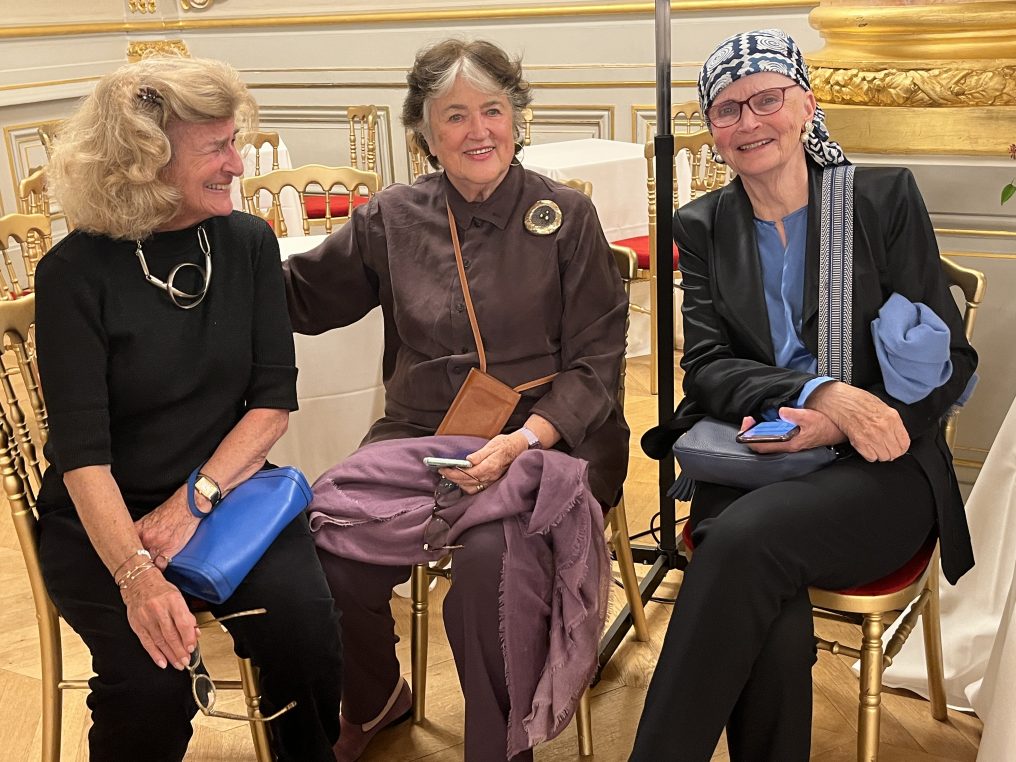 Everyone left Musée d’Orsay with a light heart, having lived a moment in history, where curators were all friendly to each other and art was at the core of Parisian life. “Le plus beau métier du monde” as both des Cars and Marchesseau described their work as curators. And it was also an extremely fun evening! 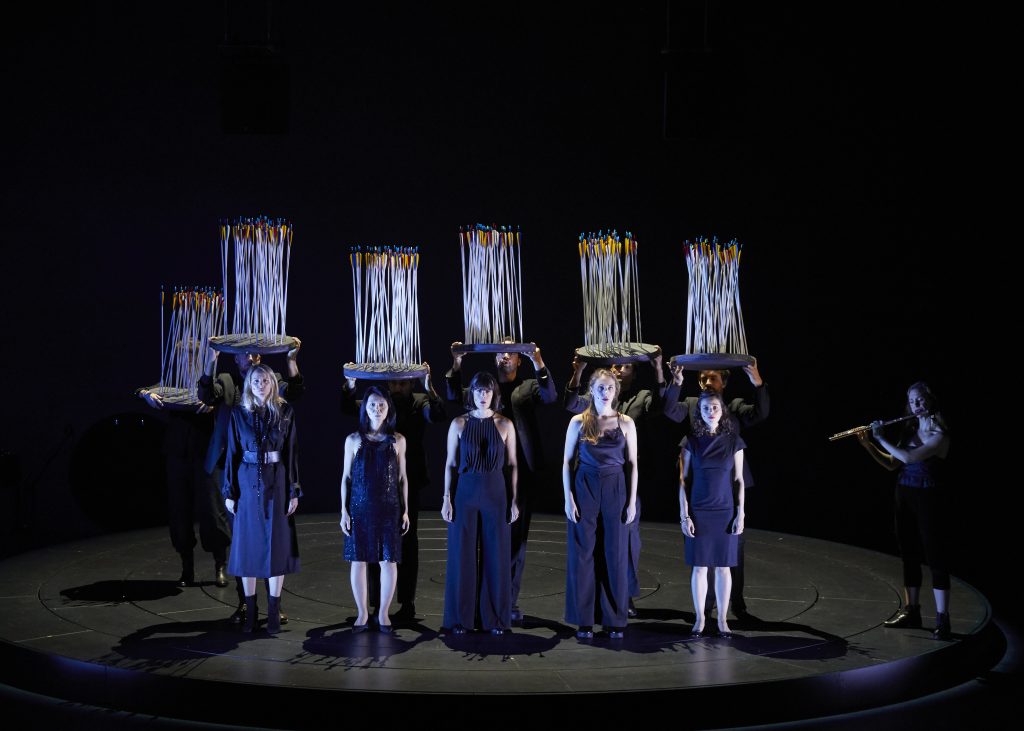 “Dafne” at Théâtre de l’Athénée, in a new music composed by Wolfgang Mitterer and a fabulous direction by Aurélien Bory

And make sure to catch tonight or tomorrow night, October 4 and 5, the amazing opera Dafne at Théâtre de l’Athénée, produced by Les Cris de Paris & la Compagnie 111. The original partition by baroque composer Heinrich Schütz in 1627, was lost in the fire of Dresden’s library in 1730. The contemporary Austrian composer Wolfgang Mitterer created the electronic music for this magical show designed with great inventiveness by Aurélien Bory and conducted by Geoffroy Jourdain.

This piece of musical theater is the apotheosis of turning the first German opera into a contemporary piece with different styles and periods, to the point that one doesn’t notice each individually anymore. Twelve chorists sing individually, some even play an instrument, on top of the electronic recording. And the chef navigates with great ease among his troupe of Les Cris de Paris. 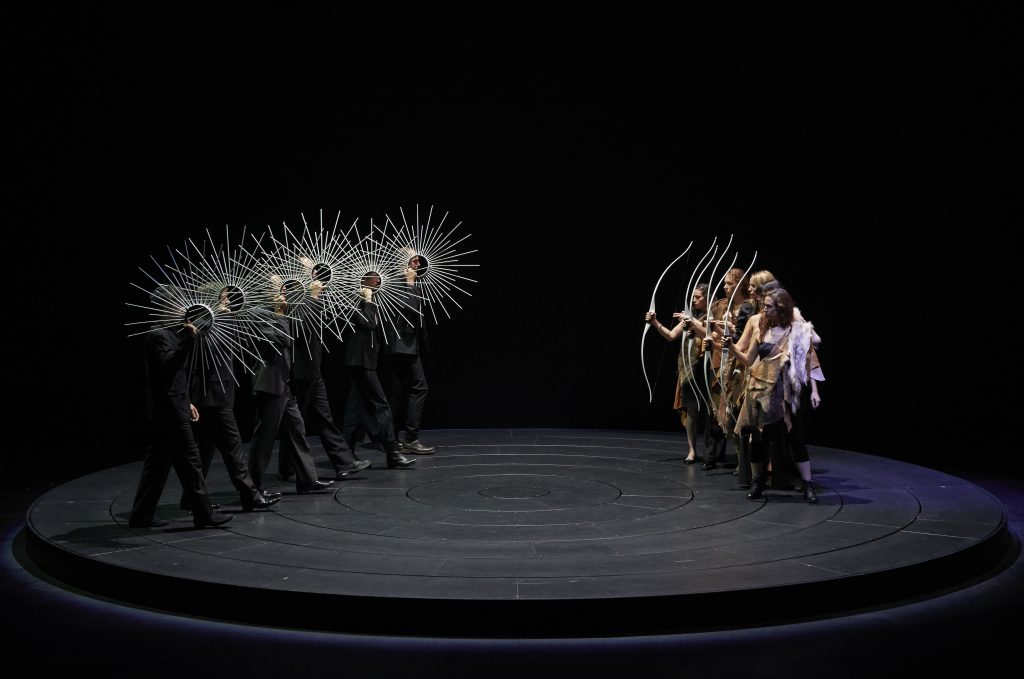 For those of you who are sensitive to the visual aspect of operas (as I am), you will have a feast. The singers constantly play with bows and arrows and metallic suns on a revolving stage which makes them move constantly at slow rythm. Six Dafne and six Apollo act and sing at the same time in the dark space of Théâtre de l’Athénée, a jewel of theatre, and just the right size for this intimate show. 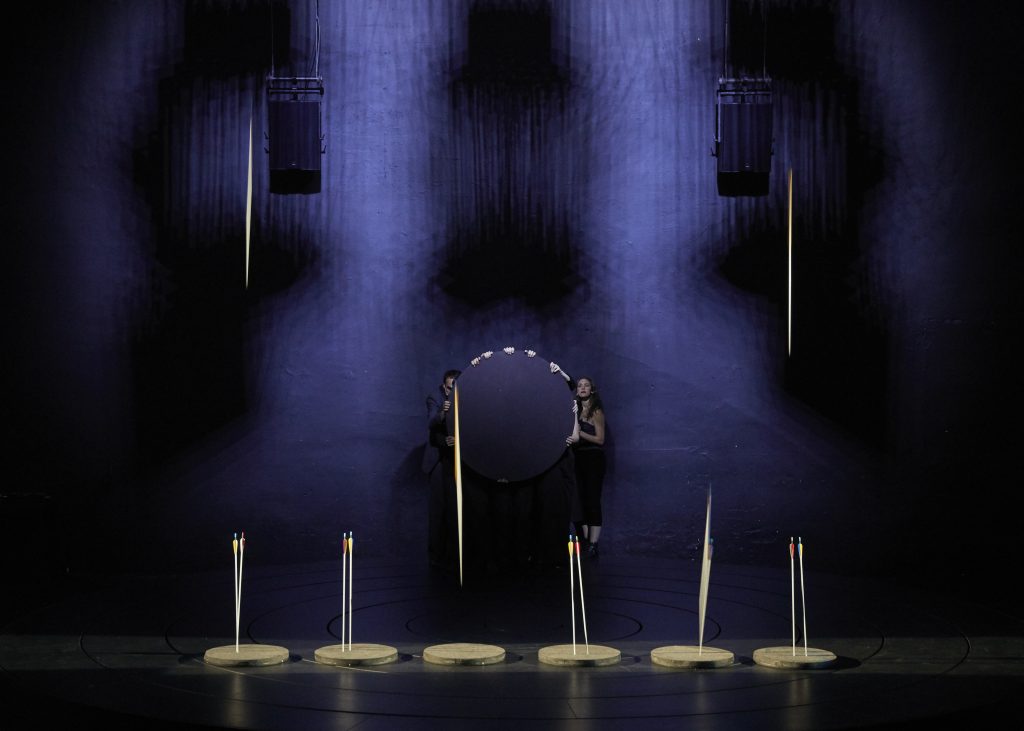 Arrows flow in the air on stage, photo Aglae Bory

There are a few surprises in the performance which lasts 1 h 20 minutes. Try to catch the show in Paris or at the Reims opera on January 20 and 21 and in Tourcoing on January 27. Then in Dijon, in February, and later in Toulouse. On the 15 th of October, another successful show of 2021 “Le voyage de Gulliver” is coming back to l’Athénée until November 5. I missed it last year but am definitely going…

6 Comments on “Happy moments, here and there”