Before going to the Louvre to see the new « Hubert Robert, a visionary painter » exhibition organised with the National Gallery of art in Washington, I had always thought he was a classical and fairly tedious 18 th century painter. But after seeing the 140 works which have come from all around the world, I am totally fascinated and charmed. 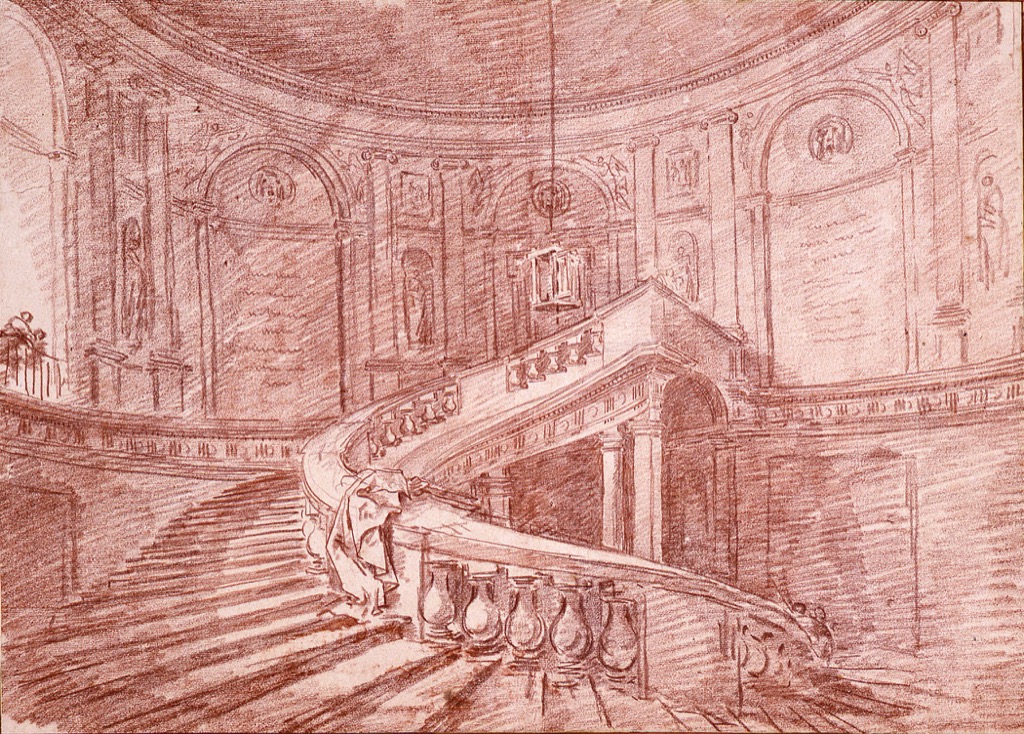 At first, his portrait by Elisabeth Vigée-Le-Brun (just back from the Grand Palais) welcomes us in a gallery full of sanguines more attractive one than the other. « Etudes de Plantes », circa 1762, is an exceptional study probably inspired by Dutch painters he met in Rome. The gunnera manicata (gigantic rhubarb) looks so modern and is overwhelming the little dog. Another sanguine of the Capitol in Rome looks incredibly modern and so does the wash drawing of « Musicians on the terrace of a villa » inspired by the Villa Medicis.

There are many chefs d’œuvre, of which I would count « L’escalier tournant au palais Farnèse à Capprarola » and les « Cascatelles de Rivoli » two ravishing oil paintings. Staircases and bridges are obviously an obsession with him and he paints them with the accuracy or the vision (?) or a briliant architect. In « Le Port de Rome » the staircase is itself a work of art.
Other scènes de genre are attractive like his « Ermite priant dans les ruines d’un temple romain » with a group of very young mischievous girls visiting the Hermit in a barn-like temple. « Les Polichinelles peintres » and « Les Polichinelles musiciens » kept in the Amiens museum, are also little gems of happy life as is his painting of « Jeune femme tendant un biberon à un bébé » (the baby might be his daughter).
Fascinated by gardens, Hubert Robert created many gardens including those of Méréville and La Roche Guyon near Paris.

An ensemble of 6 vertical paintings of Lavandières, made for Antoine Chardon’ house in Auteuil, comes from Musée des Arts Décoratifs. « A night scene of a Fête au Petit Trianon » is also quite striking. 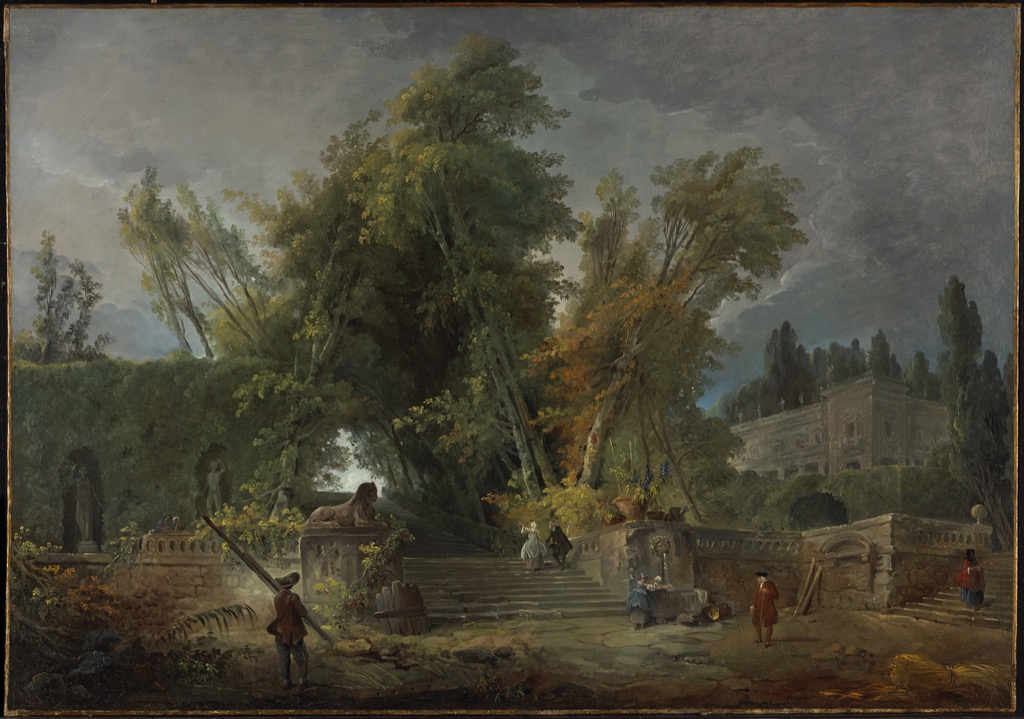 In Paris, Robert concentrated on ruins of the burned opera house, the School of Surgery’s construction and the demolition of houses on different bridges over the Seine. It is a fascinating testimony of what Paris looked like at the turn of the 18 th century.
But what moved me most, in the last rooms, were the numerous paintings he made while being imprisoned by the Revolutionaries at St Lazare prison. The corridors, the food delivery, the ball games, and the two plates he painted while in prison, all make him supremely human.

He ended his life as curator of the future Louvre, then called, Museum central des arts. This is the first exhibiton at the Louvre since 1933. It is curated by Guillaume Faroult, who speaks about the impossiblity of cataloguing the thousands of drawings and hundreds of paintings that this eminent Man of the World accomplished. His present selection is fabulous.