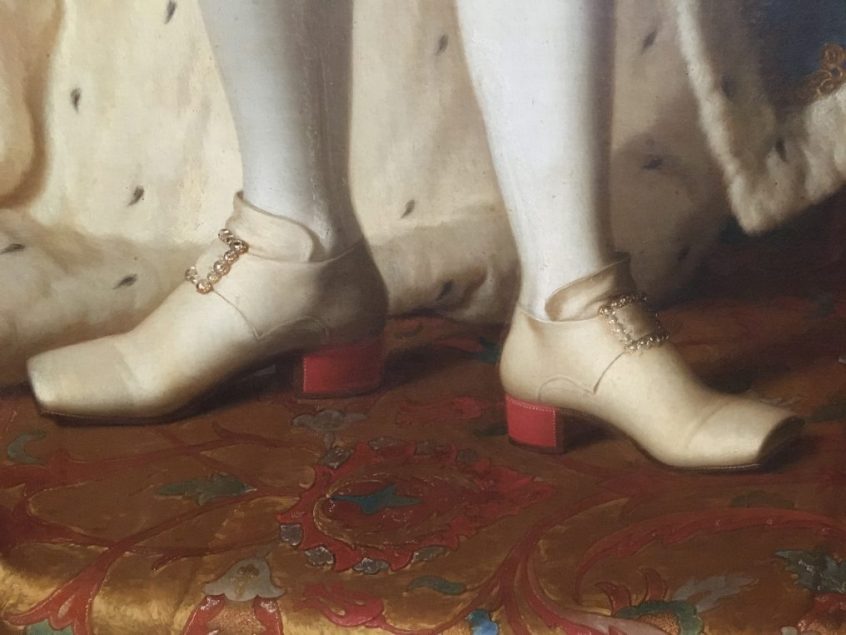 This is probably the most gorgeous exhibition of the moment: it has been “unopened” for four months and closes on June 13. So if you have time to go to Versailles, do not miss this show of 150 portraits (mostly men) by Louis XIV th’ painter Hyacinthe Rigaud (1659-1743). With a set designed by Pier Luigi Pizzi, it is the first retrospective of this master, who is best known for his “portrait en pied” of the Sun King showing his legs under the ermine of his royal costume. 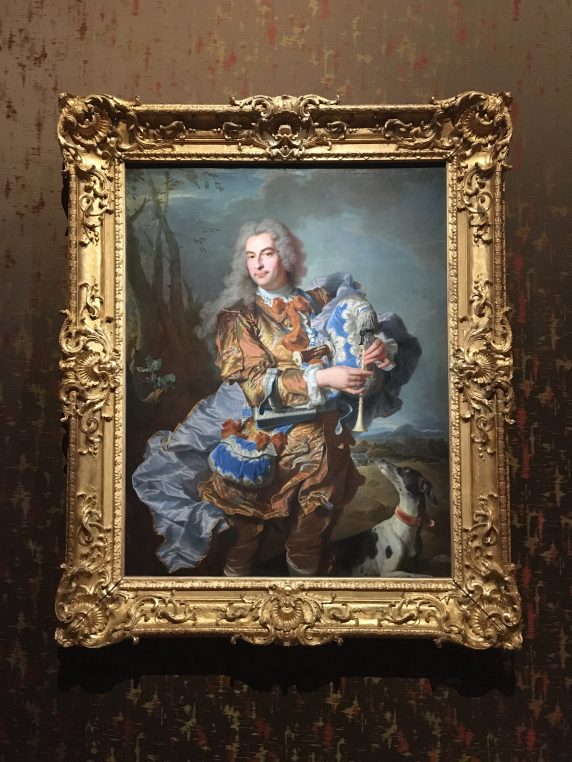 Born in Perpignan, which was then part of Catalonia, Rigaud studied in Antoine Ranc’s studio in 1671, and then for two years in Lyon before coming up to Paris. He immediately befriended sculptors and painters and the exhibition is a social register of every single artist who mattered at the time. The show starts with a large room which includes five self portraits and three of his mother, one of his brother and one of his wife Elisabeth de Gouy. Antoine Ranc, his master from Montpellier who will become the Spanish court painter under Philippe V, Louis II de Boullogne, François Girardon are all represented by splendid paintings with deep blues and reds and amazing tones of mauve. 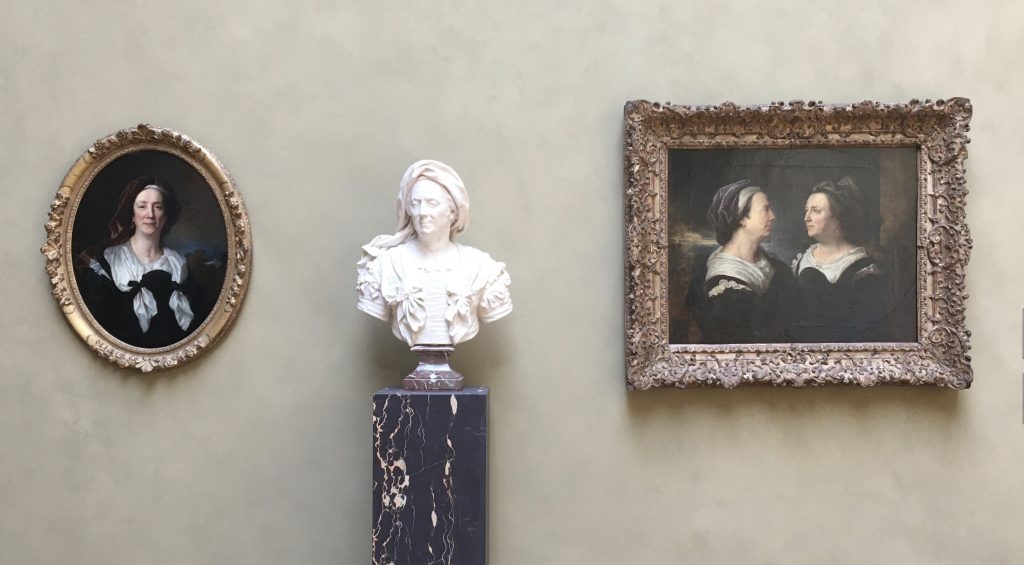 The second room of the show is devoted to the painter’s mother, Maria Serra

The lavishness of fabrics in the paintings is matched by Pier Luigi Pizzi’s decors of moiré silk which give a festive look to all the works. The sculptor Antoine Coysevox, an old friend of his, appears many times with his statues.  An interesting detail is that we have a lot of information on his commissions thanks to accounting books which detail the amount of works done by his collaborators and list each portrait ordered from 1681 to 1743. These are kept at Bibliothèque Mazarine but shown here. And we learn that Joseph Parrocel painted all the battles in the background, while Blin de Fontenay and Jean Baptiste Monnoyer painted the flower arrangements. 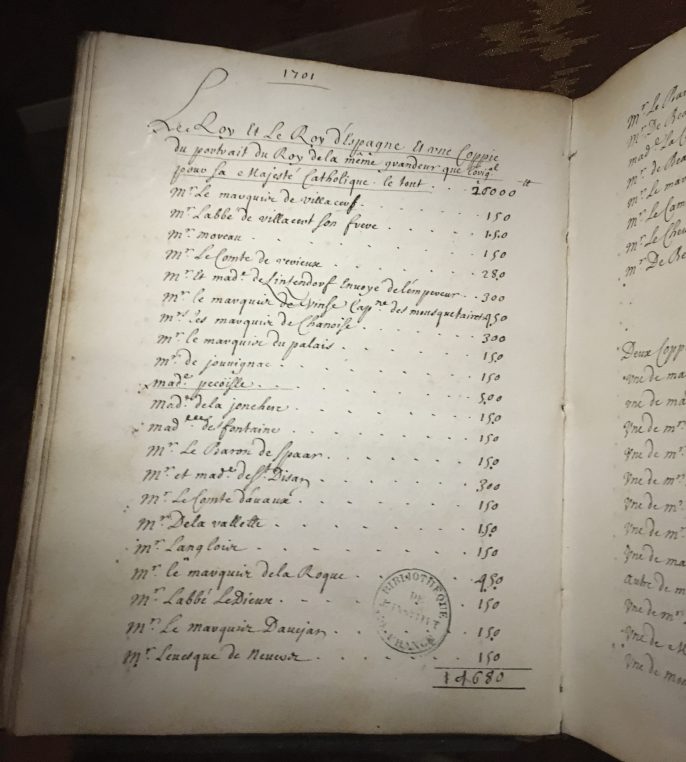 Accounting book of Rigaud mentioning the portrait of the King, Bibliothèque Mazarine

I thought the show would be a little repetitious with all these men’s portraits but the incredible richness of Rigaud’s style and decors is totally bewildering. I also enjoyed the prints halfway through the exhibition with the ravishing young Duc de Montfort lent by the Albertina, in Vienna. 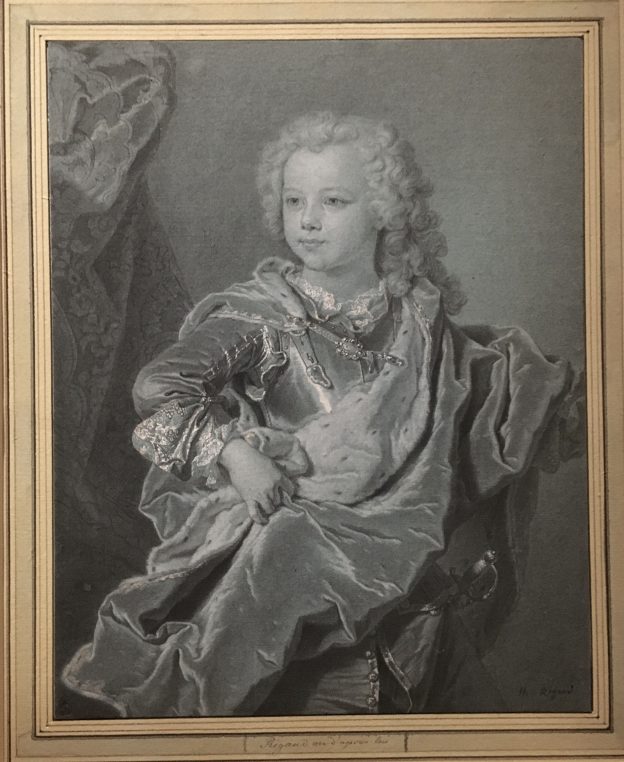 There is a red room with cardinals and famous priests dressed in lavish costumes and facing them a stern monk, Armand Jean Bouthillier de Rancé at his writing table. The room around Samuel Bernard, a rich banker and investor in la Compagnie des Indes, who at 75,  ordered his portrait for the astronomical amount of 7 200 livres, is fabulous.

The visit lasted approximately an hour, when a great surprise awaited us towards the end. Two large “portraits en pied” of Louis XIV facing each other. It is the first time that the Louvre and Versailles’s works are shown together. The audacity of the King’s posture, showing his thighs and the legs of a keen dancer, is extraordinary. It is both extravagant, very human and very official. Again the fabric on the walls with its ostentatious Fleurs de Lys (heraldic lily), is perfect. 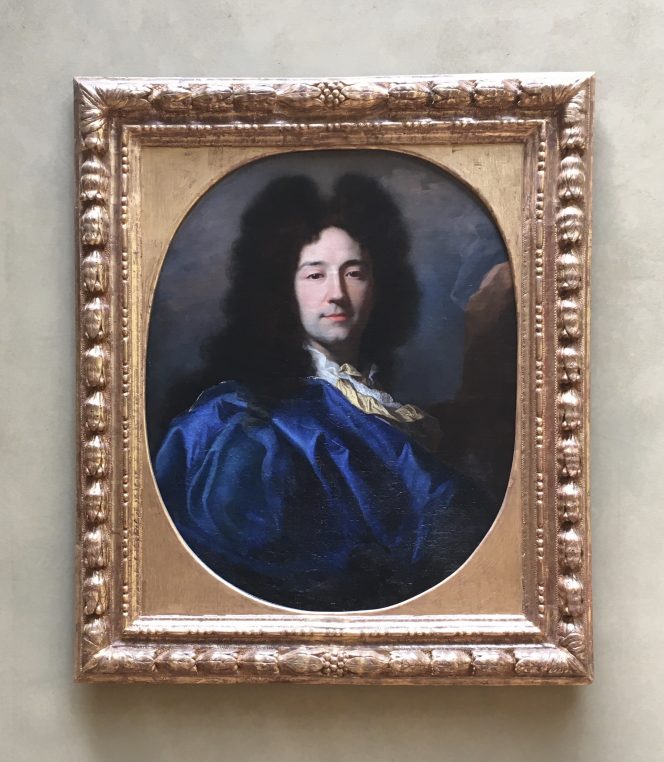 Self portrait with the blue coat, 1696, Private collection

Named “Premier Peintre (First Painter) and “Director of the Académie Royale” by Louis XIV, Rigaud painted over 1 500 portraits during his long career. He started at 12 in Ranc’s studio in Montpellier and painted for over sixty years. After concentrating on his family, his fellow artists, he painted intellectuals like La Fontaine and magistrates as well as financiers. Little by little, foreign dignitaries like the Duke of Mantova also came to Paris to be portrayed. 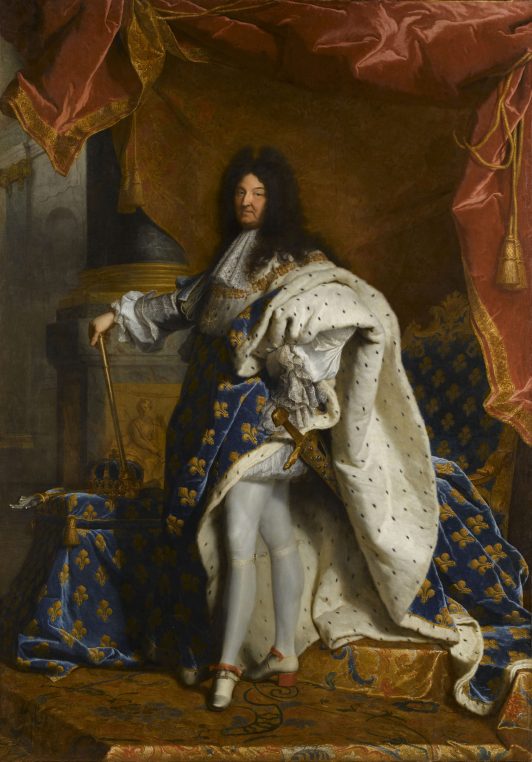 What Laurent Salomé, Director of Versailles and co curator of the show (with Elodie Vaysse) mentions in the introduction is the extravagance and the humanity shown in the king’s portrait. Rigaud will always give this feeling of intimacy with the man he portrays and the visitor feels like he is talking to the protagonists. And of course the great advantage of painting over photography is that the artist is free to embellish the model… 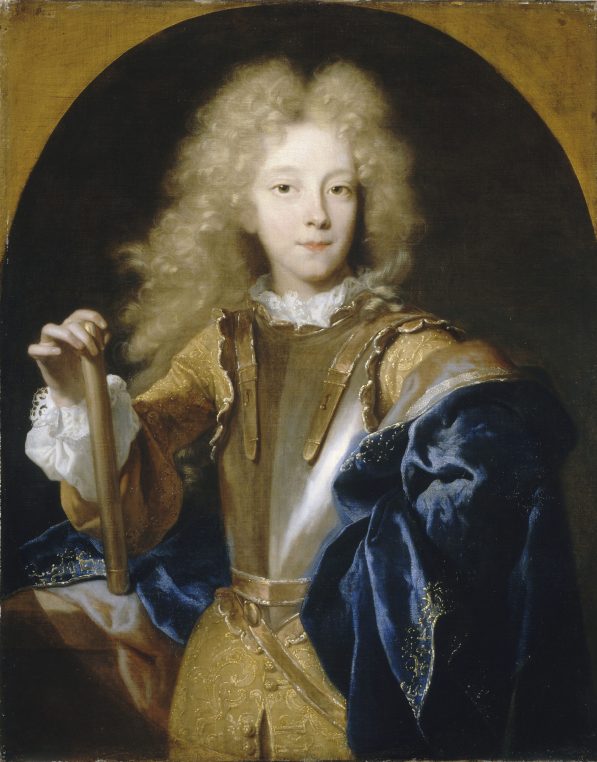 The exhibition Rigaud is on until June 13 at Chateau de Versailles. It is mandatory to book but there are no lines. If you have time you can also book to visit the small apartments and see the king’s newly renovated “Cabinet d’angle”.

3 Comments on “Hyacinthe Rigaud in Versailles, don’t miss it!”