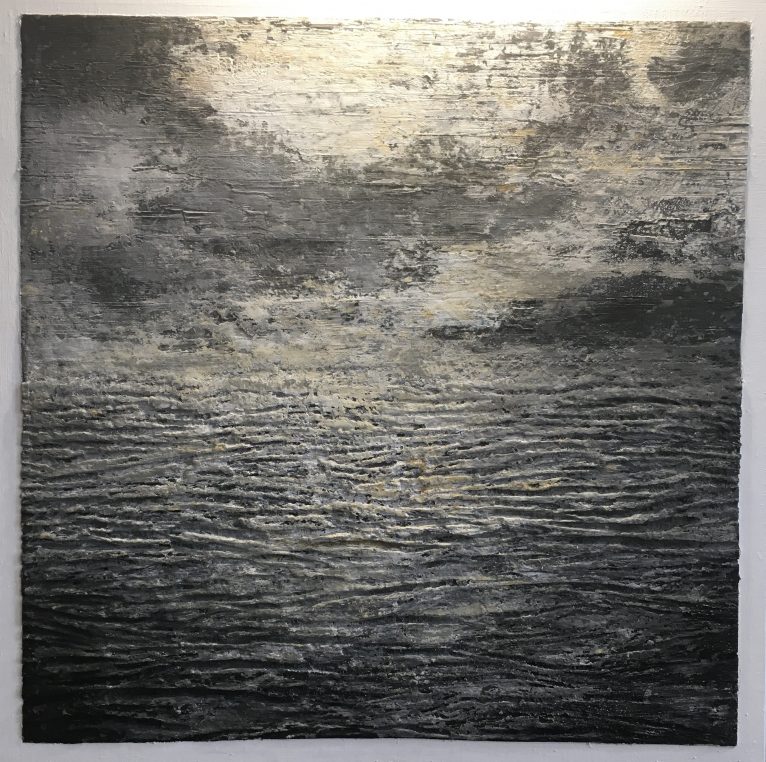 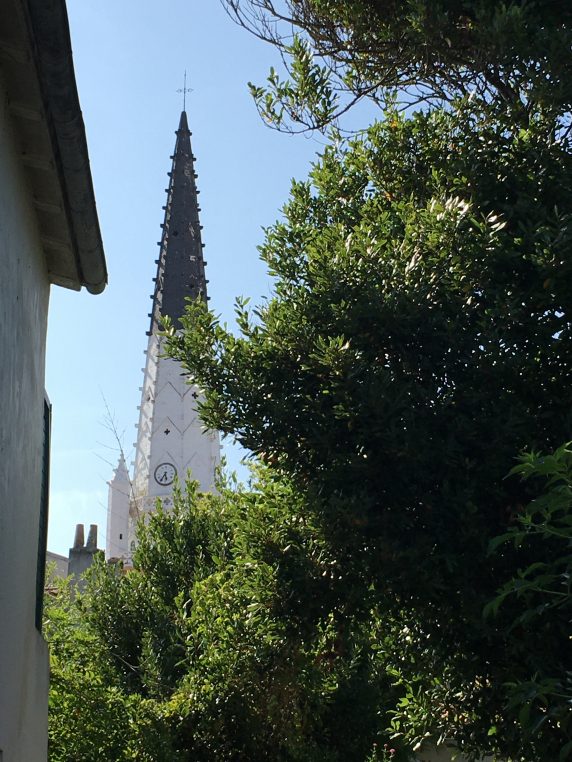 The magical Ile de Ré acquired a bridge in 1988 and since then, it is easily linked to La Rochelle and even more popular than before. There is great social rivalry between Les Portes, at the extreme end of the island, and Ars five miles away, a bit like East Hampton and Southampton in the summer. But in the end, lunch or dinner parties reunite everyone even if you live in Saint Clément. And the general tendency is simple life on the huge beaches, biking everywhere and of course, gossiping. I was lucky to be hosted by Jérôme Dumoulin, a writer and former journalist, who is deputy mayor in charge of culture at Ars-en-Ré and grew up there. His profound knowledge of the territory and his devotion to promoting the patrimony of the island made all the difference… 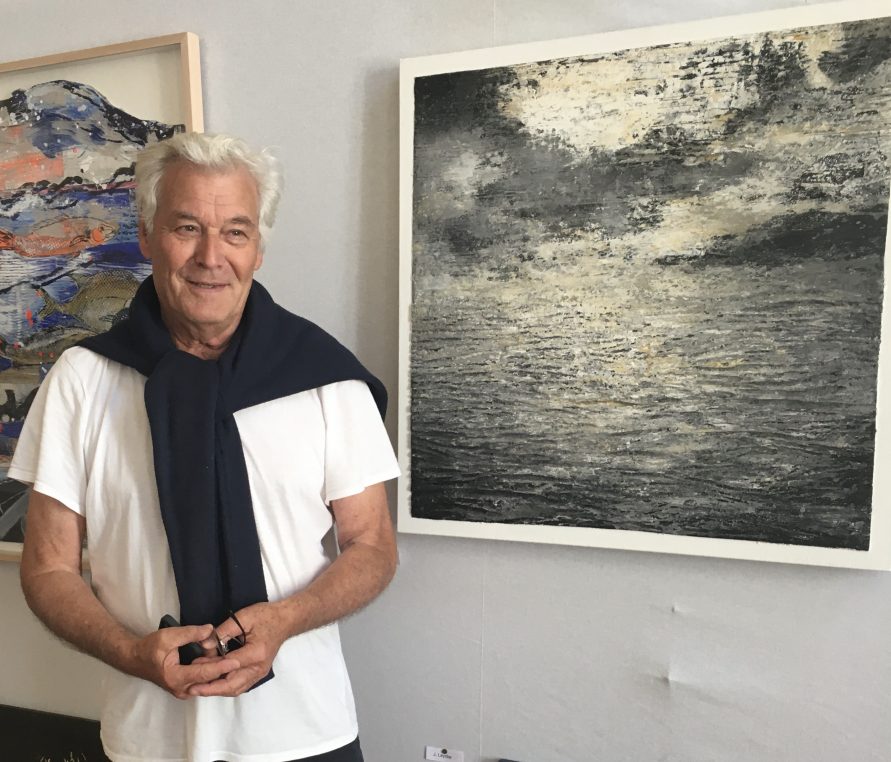 The charming and talented painter, François Cante- Pacos with one of his paintings

Visiting the exhibition “Vous aimez la mer”, he organized in three different venues of Ars was a perfect way to meet everyone, everyday. One walked from one gallery to the other to see old paintings at Maison Caillaud in front of the church, contemporary paintings at Salle du Havre and photography at Chapelle du Couvent, a very pretty space next to the gendarmerie which meant that visitors could meet the very handsome young gendarmes exercising in the courtyard. I went every day… 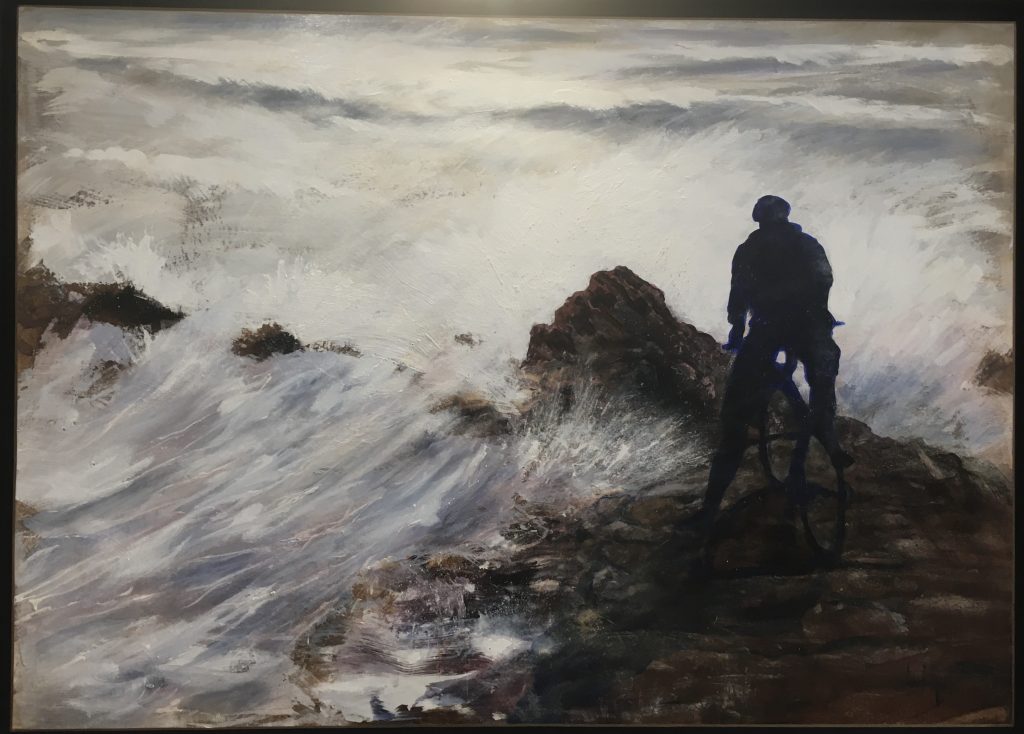 There are quite a few famous painters in Ars and François Cante-Pacos (who also sculpts), at Galerie Bertrand, and Olivier Suire, at galerie Carnot, both have another exhibition at the moment. Guy de Malherbe had lent a beautiful painting, Françoise Toulouse immediately sold her large painting called “Waves”, the great cartoonist Pierre Wiaz (Wiazemski), who had exhibited the week before at Galerie Carnot, also lent a dramatic wave and Eva Jospin, whose parents have a house adjacent to the galleries, showed a drawing. I liked Clémentine Aguettant‘s ceramics very much and in the photography section, Nicolas Rayneau and Patrice Gogue were the two promising young artists. What I liked about them, is that they don’t hesitate to also sell their photographs on the market. 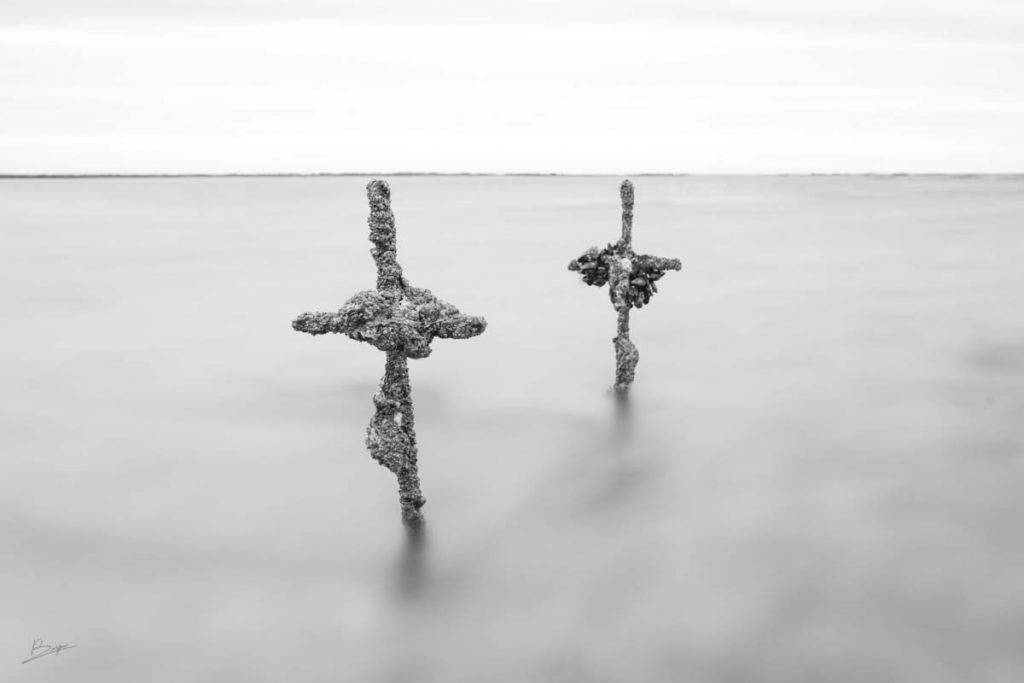 The very pretty church of Ars, which is visible from far at sea with its peculiar black and white spear, has been renovated recently and last year some of the same artists had contributed with a painting of the church. The sea is of course omnipresent on this narrow island which is famous for its salt and oysters but also now for its wine. It wisely keeps a proportion of 80% agricultural land and 20% constructions, so that the feeling is still very wild except for the main road which is permanently busy. 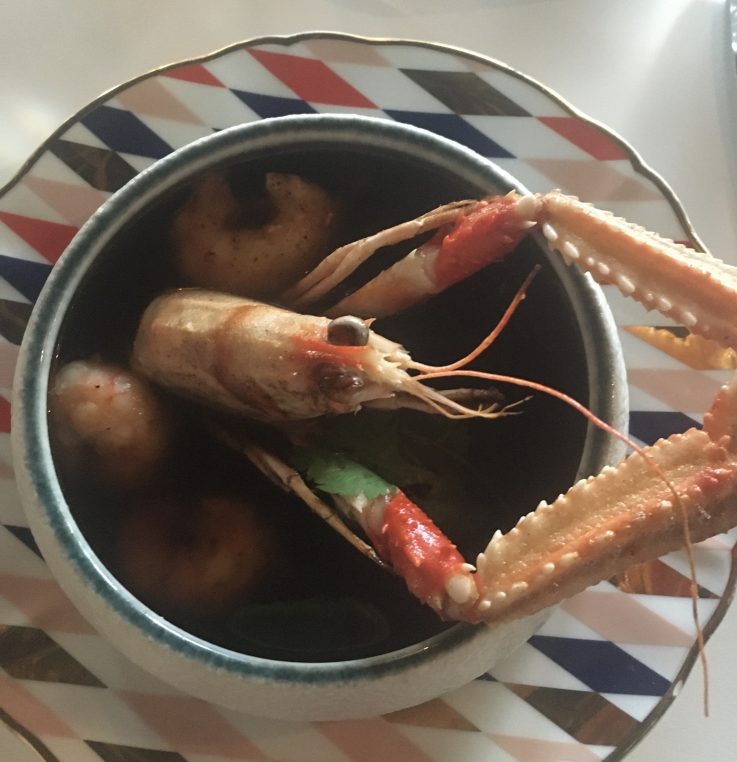 While entertaining is pretty low key everywhere (hostesses don’t change plates for cheese and I twice rebelled), a new restaurant Le Bastion has opened in a former night club of Saint Martin set in Vauban’s fortifications. Many old Rétais were appalled that I even wanted to go to such a “Saint Tropez” style place but I was curious to see the fabulous views and mostly to taste Bernard Frigière‘s famous cooking. This chef, who is also an artist and exhibited some of his animal bronze sculptures in Ars, used to run le Bistrot de Bernard a fixture in the harbor of Ars-en-Ré. This was the cantine of anyone who was anyone in the village. He went on to open La Maison in Saint Martin, the larger fortified harbor in the middle of the island and now reigns over Le Bastion, a 150 seat restaurant with the best view facing the sea. 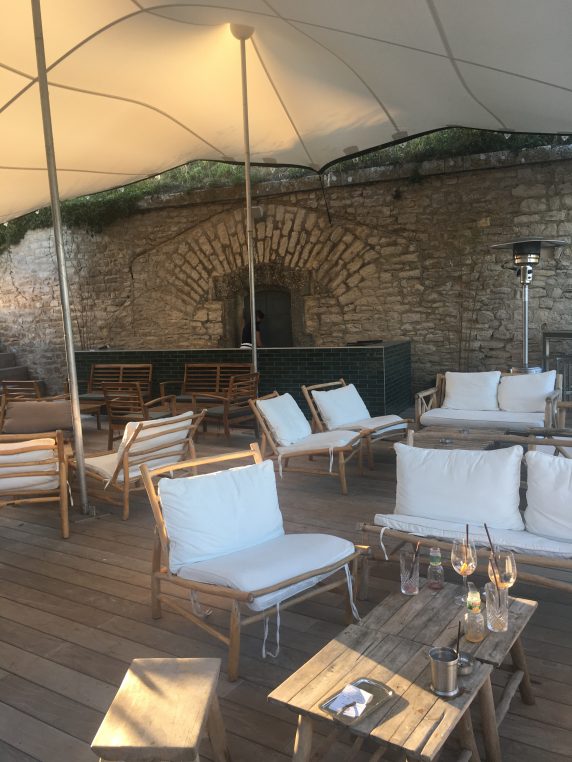 He recommended the “ris de veau aux langoustines” (sweetbread) which was out of this world. The langoustines were so soft and melting in my mouth, that I still think of them a few days later… I picked the consommé de langoustines, a delightful light and tasty starter, while my friend had “ceviche de maigre in coco milk”. You can have traditional lobster, or mixed in a risotto, roasted octopus, grilled turbot or Saint Pierre, oysters and mussles (mouclade charentaise). And this is what I like about Bernard Frigière: he cooks a “côte de cochon” (pig roast), veal kidneys or foie gras as happily as he serves fish and shells. The decor is so grand with a large vellum that I expected the bill to be huge. And it was not. Of course, you tend to indulge in various cocktails (priced at 12€) overlooking the beautiful bay at sunset, and this could increase it. 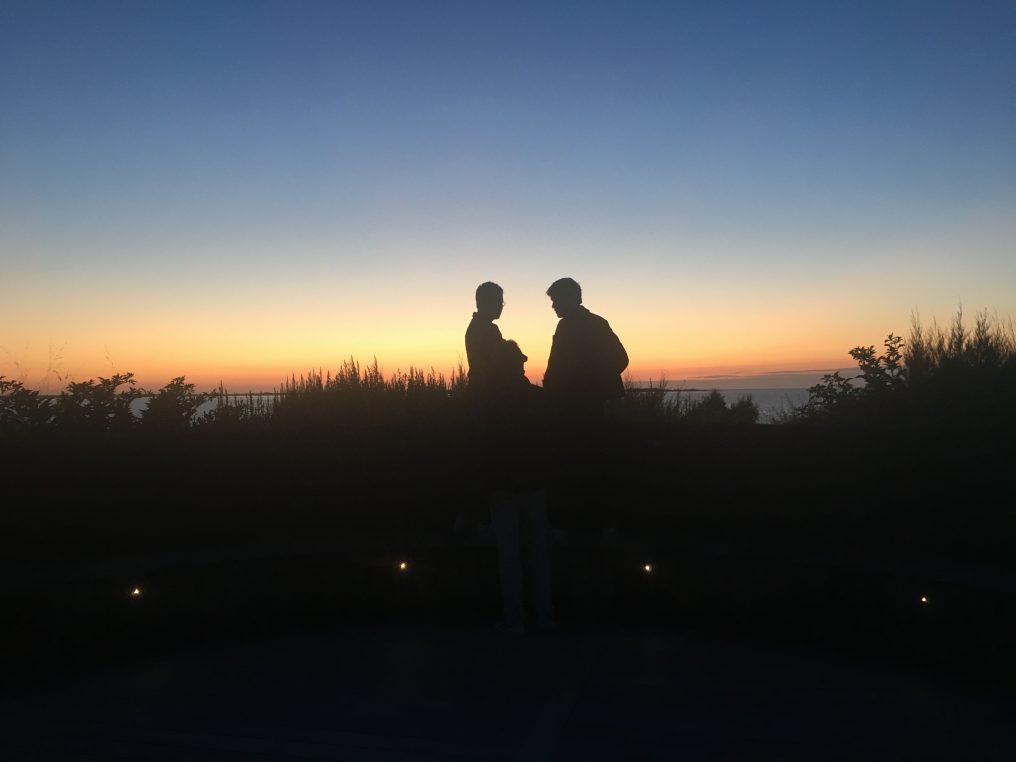 The terrace overlooking the bay is a must at sunset

My only disappointment was the dessert of “gratiné de fenouil” (fenil crème brûlée) which was cold inside… And make sure when you go, to start with drinks on the little terrace overlooking the ocean and book a table outside on the veranda. The larger room of the restaurant in a closed tent sounded very noisy…

11 Comments on “Ile de Ré is in top cultural form”