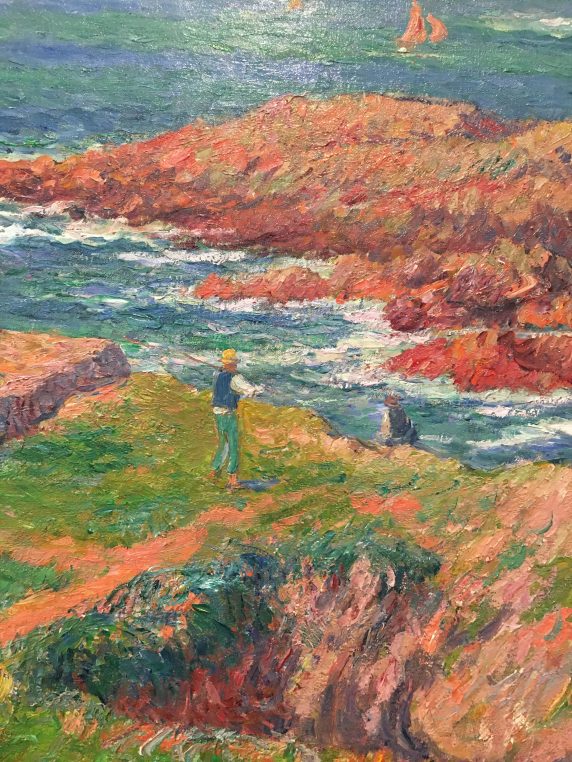 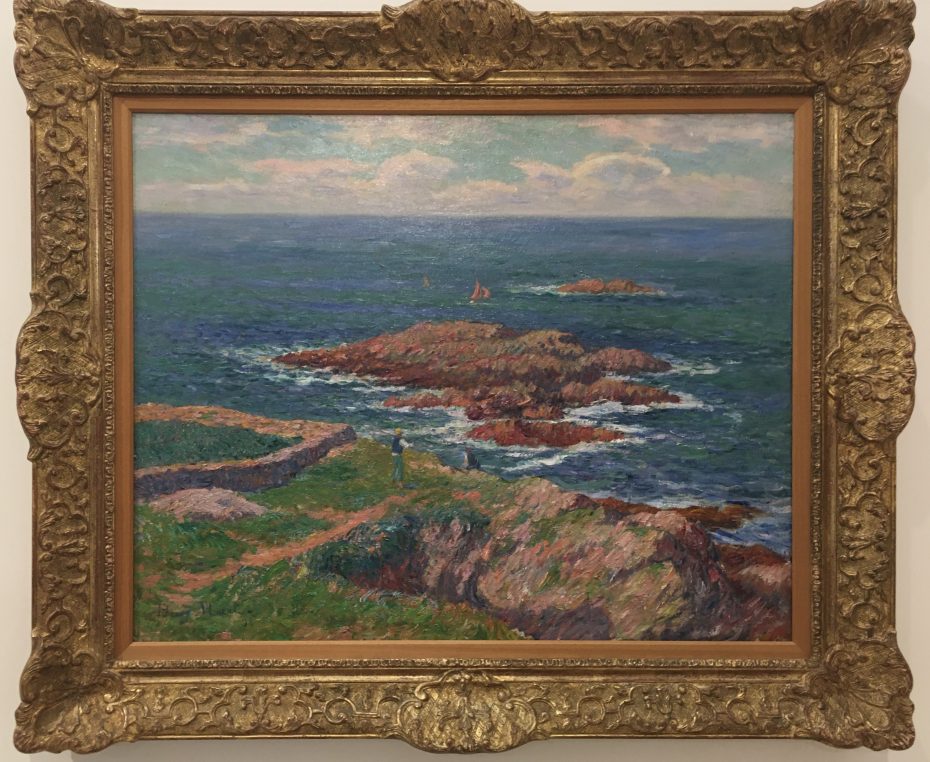 I had a spell of Brittany for my first week of vacation and once again adored every minute of it. Pont Aven, Quimper, Beg-Meil, Sainte Marine, Pont l’Abbé, all magical names with poetry and dream attached to them. I was there for a wedding on the Odet, which was successful beyond words in terms of friendship, love, beauty and even spiritual fervor. And the discovery of painter Henry Moret’s hundred paintings at Quimper’s Musée des Beaux Arts was the cherry on the cake. Shopping for tablecloths at Le Minor in Pont l’Abbé is, of course, mandatory. 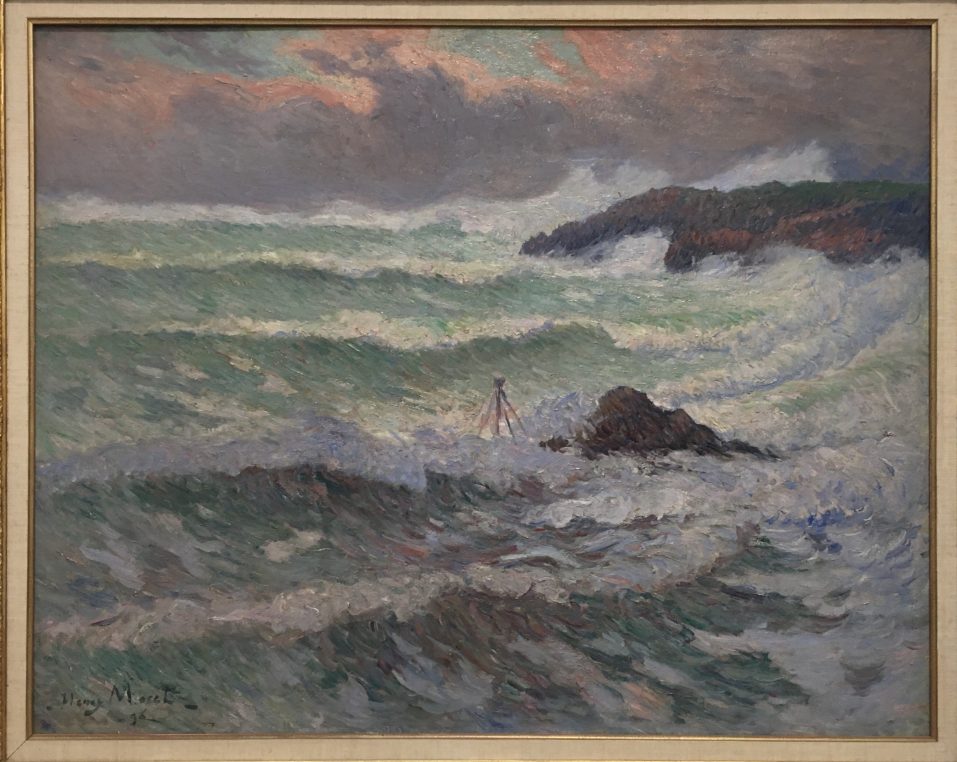 Henry Moret (1856-1913) was discovered by Impressionist dealer Paul Durand-Ruel in 1895 and he ended up acquiring 650 of his works over a twenty year period. The particularity of Moret’s talent is his choice of colors, very bright purples and blues, pinks and greens and his passion fro wild seas. He was called a “bard of light on the Brittany coast”. He settled in Lorient and later in Bas-Pouldu, a country village near Pont-Aven where he met Gauguin, Sérusier and De Haan. He was voluntarily solitary and the regular sales of his works in America and in Paris insured his daily confort. 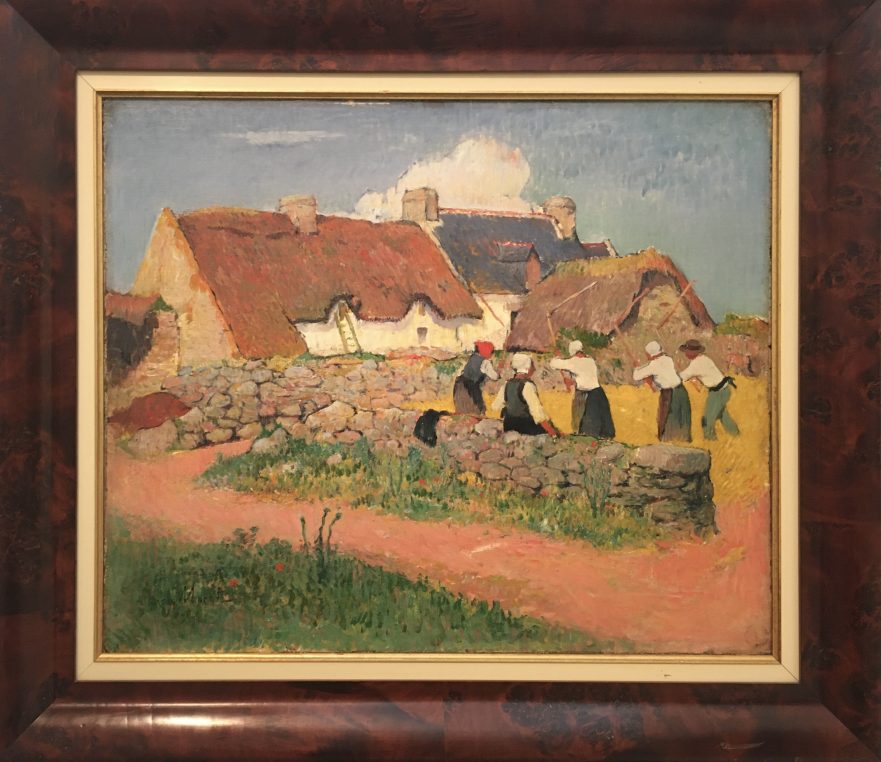 Henry Moret, “Beating the wheat in the village”, 1894, private collection

What I love in Moret’s works is the series of themes which are typical of Brittany: you watch the fishermen and goémon collectors on the beach but also the peasants with their cows or harvesting hay, and the little ladies on the cliffs. He admired the “primitive beauty” of the sea and the coastlines of Brittany and visited all the islands, Belle-Ile, Houat, Groix, Les Glénan, Ouessant, on his boat. He approached the cracks and crevices in the cliffs and created grandiose landscapes. 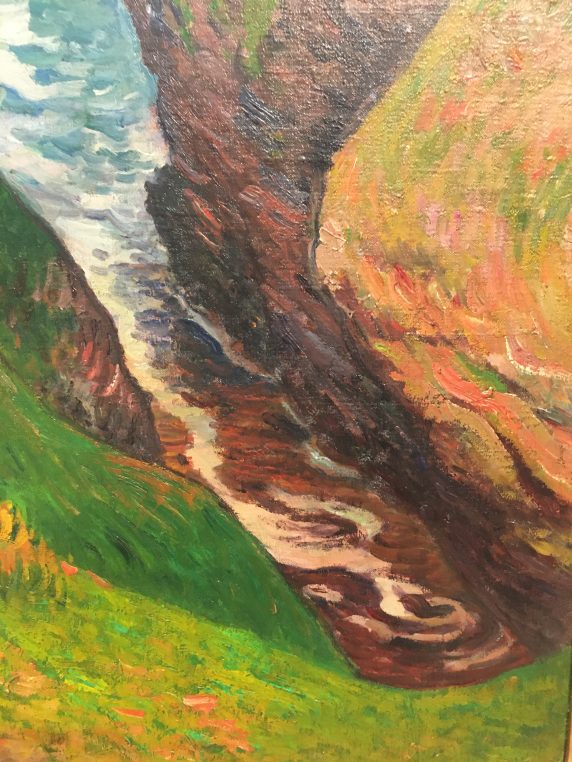 The two museums in Quimper are devoted to Britons’ works and one observes better today’s landscapes after having seen these paintings. I call it my cultural tourism…

There is also an exhibition in Pont Aven devoted to Jean Puy who was collected by Ambroise Vollard. I found him less convincing except for his prints and fusain drawings which are very strong. In Sainte Marine’s Fort, another painter André Dauchez, is also being rediscovered. again his prints and drawings are excellent. It is worth going to this magical little harbor across the Odet from Bénodet, where the 3 mile long beach leads to Il-Tudy, the best place for oysters along the coast. And le Tri-Men Hotel is one of the most charming on the coast. 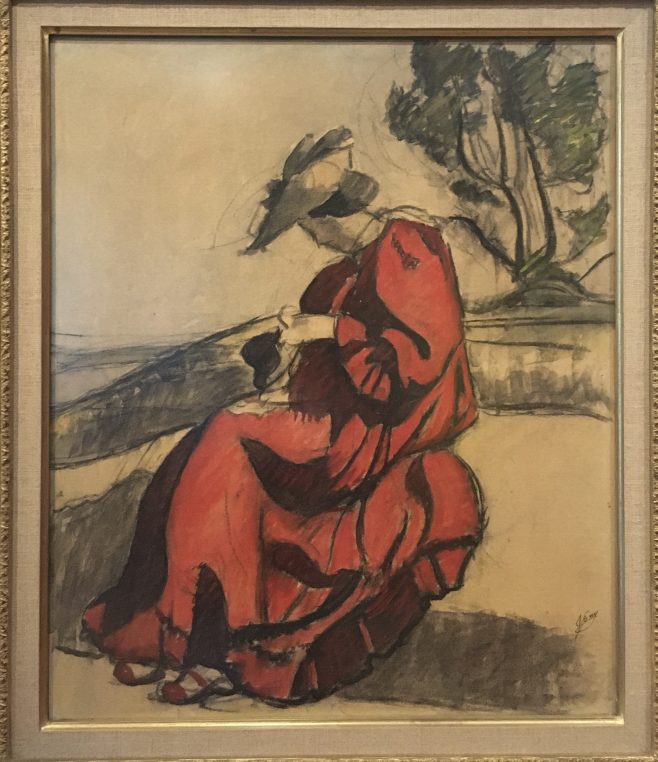 I was staying in Beg-Meil in a house with a view of the bay filled with sailboats and was happily surprised, on my first night, to see Jean Le Cam‘s boat passing by with its recognizable CA sign. This famous French navigator, 61, who saved one of his fellows, Kevin Escoffier, in the South Atlantic on the last Vendée Globe this winter, was awarded the Legion of honor on July 14, for his achievement. He has won every possible race and is nicknamed Le Roi Jean. 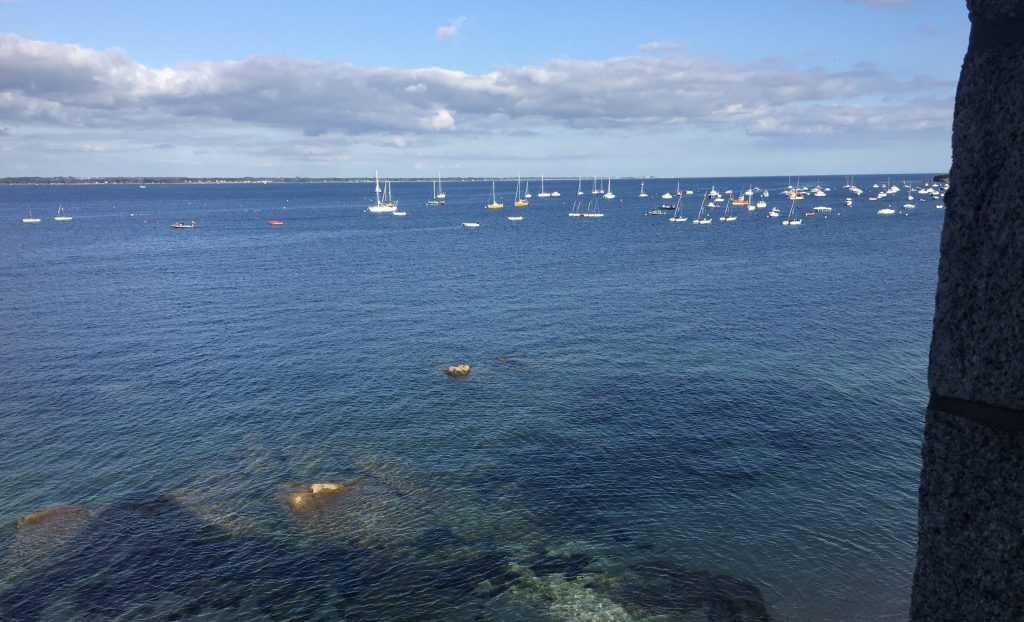 The bay of Beg-Meil facing Concarneau

The conclusion of the week was the charming and loving wedding of Raphaël and Joséphine who had picked Manoir de Kerouzien, an 18n th century house on the river Odet, for their reception. There was not a cloud in the sky for three days and every guest was bemused by this very special moment in Brittany. The colors matched Henry Moret’s! 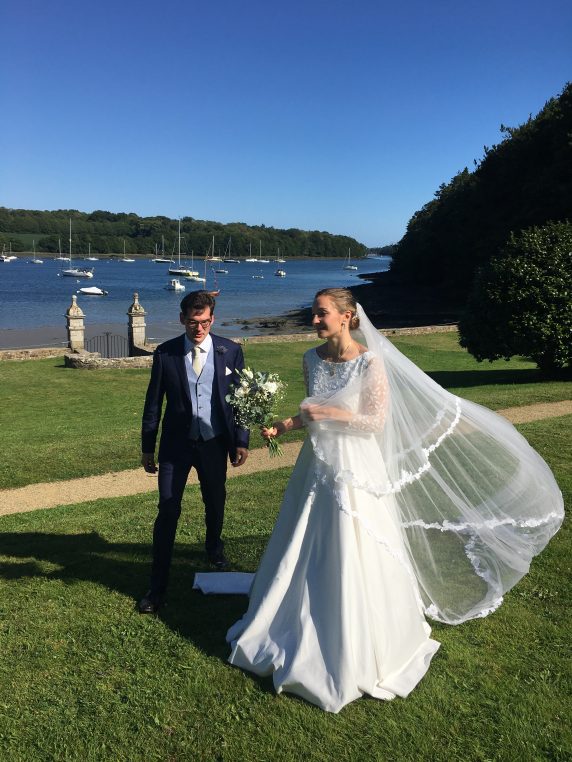 Musée des Beaux Arts de Quimper, Henry Moret until October 4, Musée de Pont Aven, Jean Puy-Ambroise Vollard  until January 2. And do not miss the visit of Concarneau’s “Ville close” within Vauban’s fortifications. The best time to go is late in the afternoon, when teh tourists are gone and stay for dinner at Le Chantier on the harbor, an unpretentious, local brasserie.