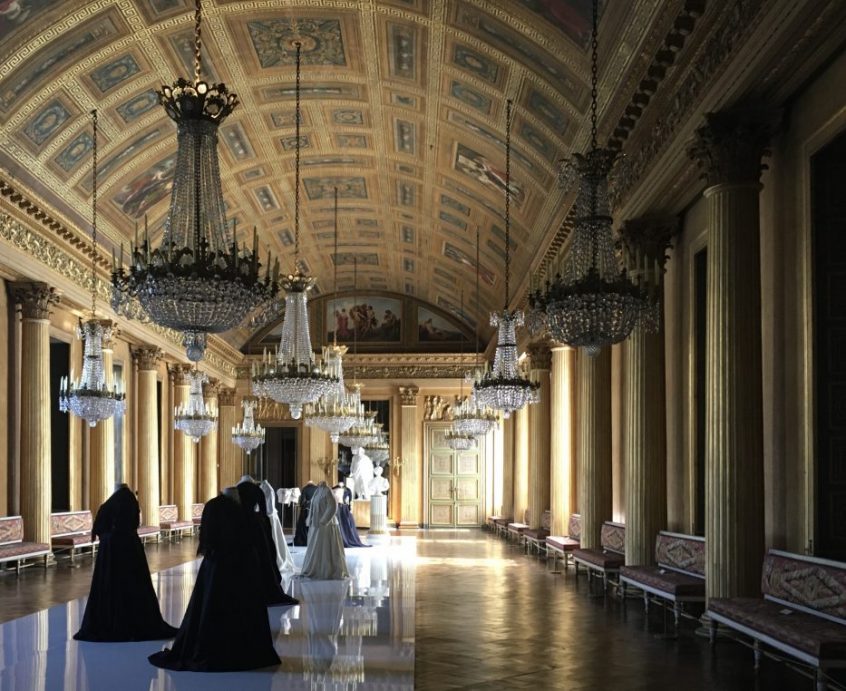 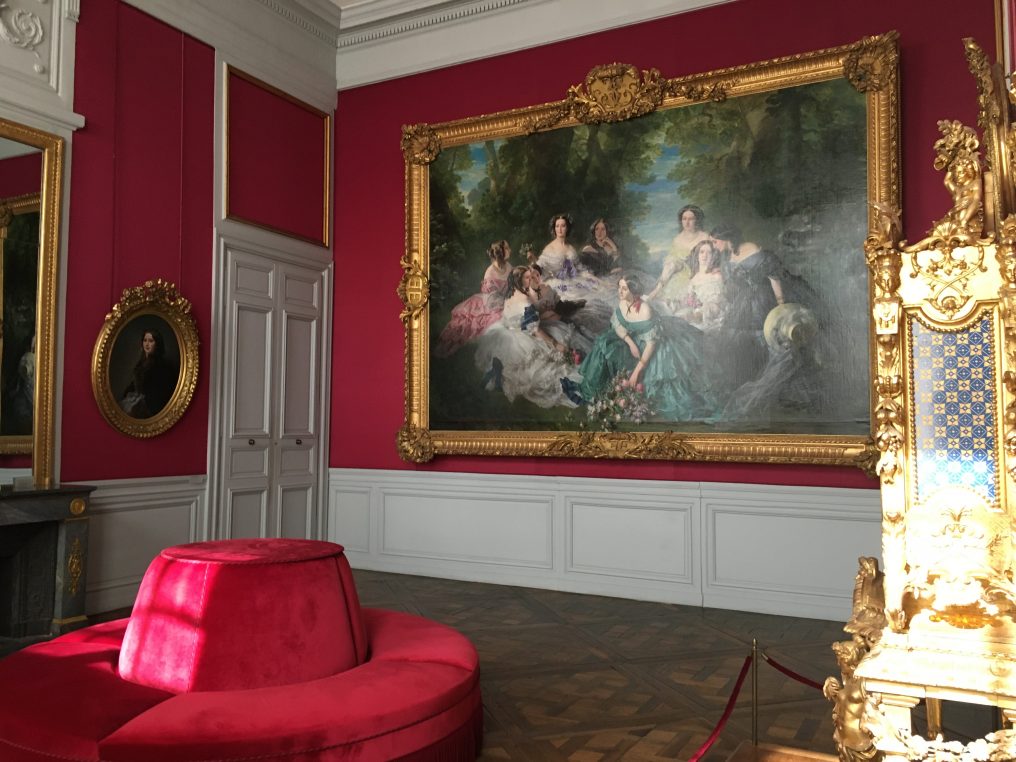 Franz Xaver Winterhalter, Empress Eugénie with her ladies in waiting, 1855

Château de Compiègne is a sleeping beauty which is slowly being awakened by the senior curator Rodolphe Rapetti and at the moment, a modest exhibition of costumes worn by Empress Eugénie, Napoléon III’s wife, is matched by a brilliant book written by Laure Chabanne with photographs by Gustave Le Gray, paintings and watercolors by Eugène Lami, and numerous artifacts which give a good idea of the lavishness of the period. I highly recommend that you visit the well restored apartments where many objects are now being shown and read the book first. It is a charming jump into luxury and glamour of the past. The museum of old cars is also an attraction. 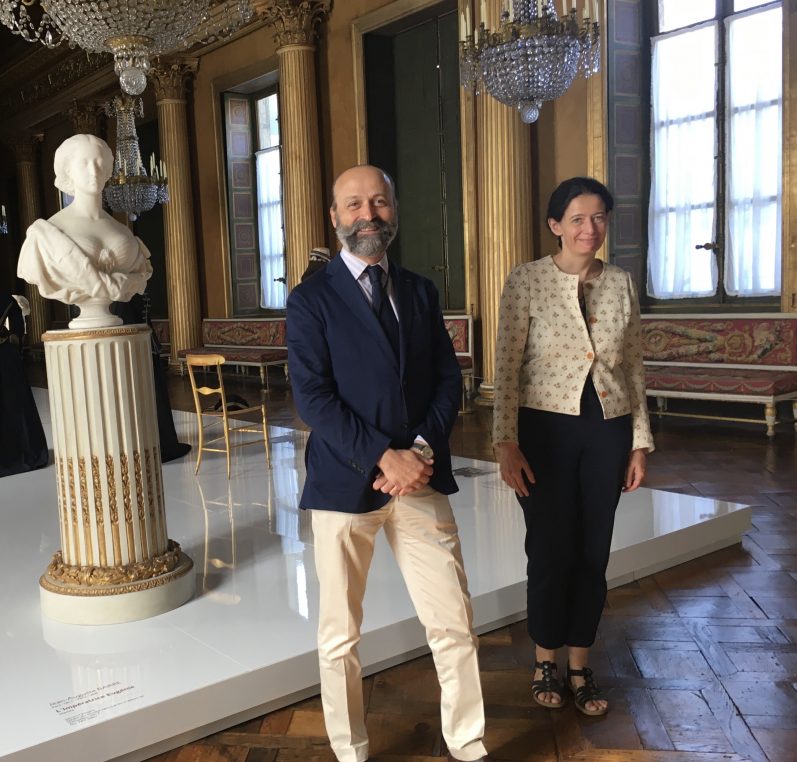 There is a sweetness in visiting provincial museums especially when they belong to Imperial history. Compiègne was the site of one of the first moment of courtship between the Emperor and Eugénie de Montijo, a very pretty Spanish aristocrat. She admired a clover covered with morning dew and a few days later the Emperor sent her a brooch of the same clover which she often wears on paintings. Everything is romantic about the marriage of this empress who ended her life in exile in London and lost her only son to the Zoulous in 1879. 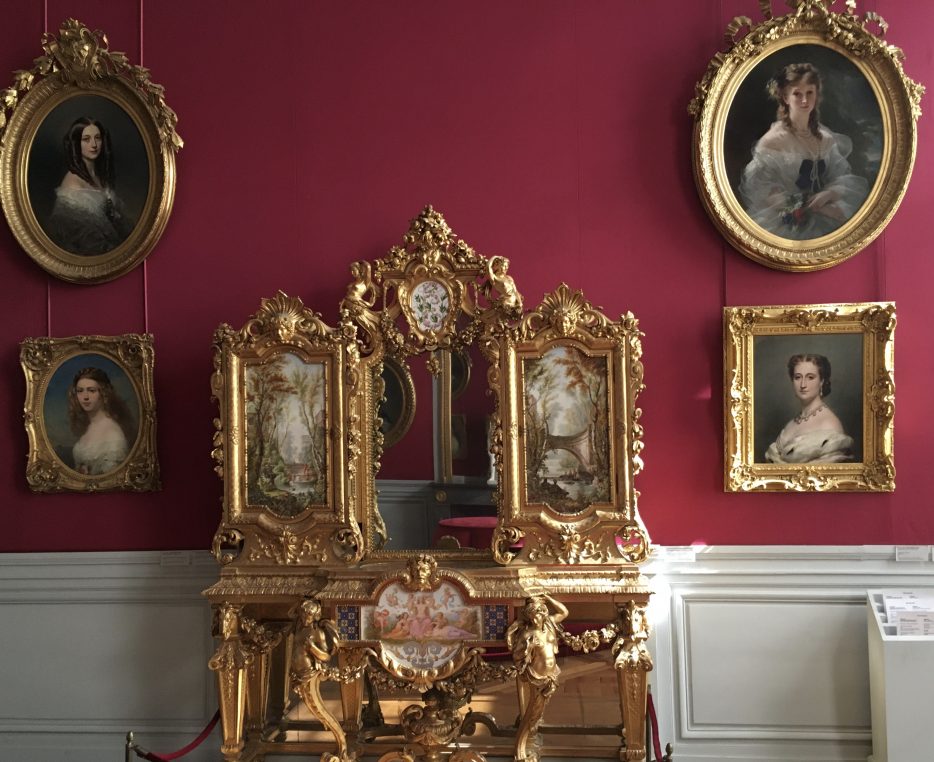 A very kitch Sèvres cabinet made by Jules Auguste Fossey in Louis XIV style in 1855, with four portraits by Winterhalter of Amélie of Bavaria, Claire Emile MacDonell, the Empress Eugénie and Duchesse de Morny

Eugénie’s bed at Palais de l’Elysées is shown in one of the rooms with its green damascus silk, furniture has been collected from their different houses to create a decor which makes for a succession of rooms beautifully furnished. The book shows the original decors and the furniture in situation today. It is as much a historical fresco as an interior decorator’s delight and could only be made so lively by an art historian who knew the life of the Empress by heart which is the case of Laure Chabanne. I loved discovering a painting on an egg shaped vase made in Sèvres, showing the Empress at a hunt in the blue uniform of an amazon shown in the exhibit. I wish both pieces had been shown together like in the book. 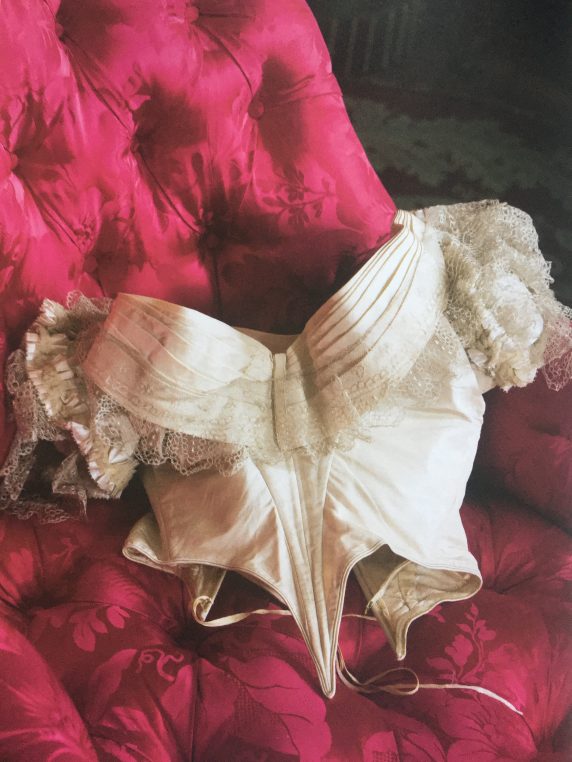 This top in white satin was worn by the Empress when the couple was attacked in 1858 by Orsini. She always kept it with her.

The first Andalusian bolero worn by the young Eugénie in the painting by Odier in 1849 is completed by a collection of precious slippers, size 36, with a narrow foot, by a military uniform and two white summer dresses one of which was for yachting. Part of the intimacy of the Empress can be felt in these costumes preciously kept at Compiègne. Intimacy which is well studied in the book with the evocation of the Biarritz days painted by Emile Defonds, with the numerous souvenirs of her son, in his cot at the Tuileries Palace, with a picture of the First World War where she visited wounded soldiers in Farnborough. One of her last pictures is with the Queen of Spain in 1920, her goddaughter whom she bequeathed all her emerald jewelry given by Napoleon III. Her funeral service in Farnborough on July 20, 1920, was attended by  Alphonso XIII, George V and Queen Mary and 60 000 people. 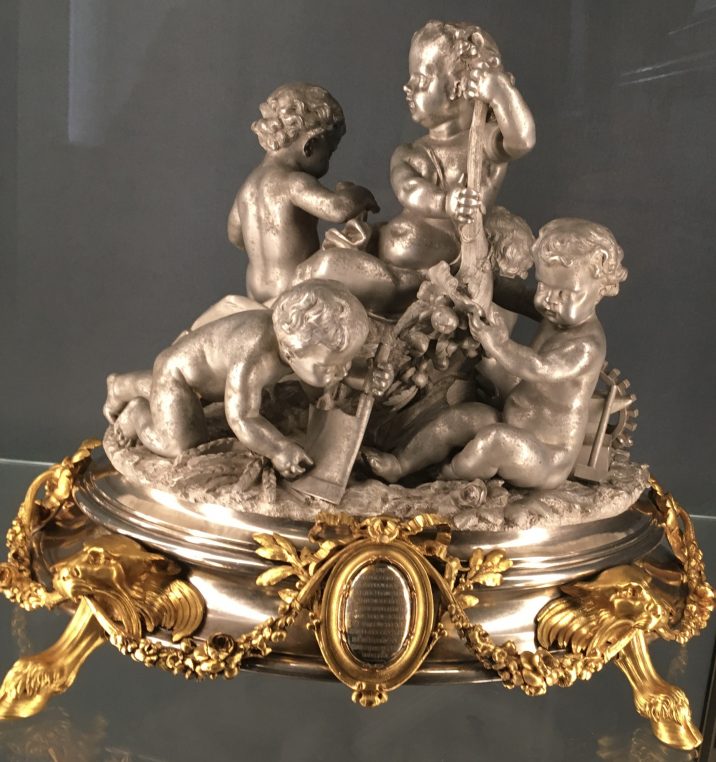 Maison Christofle, table center with putti engraved with the Imperial arms of Empress Eugénie, aluminum with silver and gilt brass, given to the empress by chemist Henri Sainte Claire Deville

Like the Victorian age in England, Napoleon III’s period was rich in technical discoveries and decorative arts luxuries. Château de Compiègne is the best place to see these crazy furniture pieces and see again the James Tissot painting of the empress with her son in Camden Place.  While in exile, the young prince joined the British army and left for Africa where, on June 1, 1879, he was killed by the Zoulous. His mother went to South Africa the following year to see where her son had died. 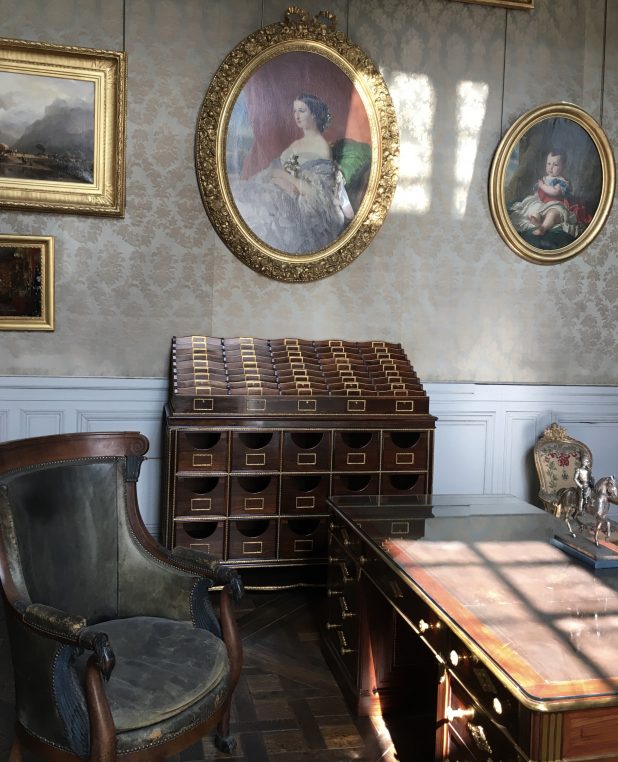 A very pretty mail cabinet which comes from the Tuileries Palace

At the moment the Imperial apartments are only open in the morning, the car museum in the afternoon, but you can always book a special tour. And make sure to buy the book (35€) published by Flammarion. 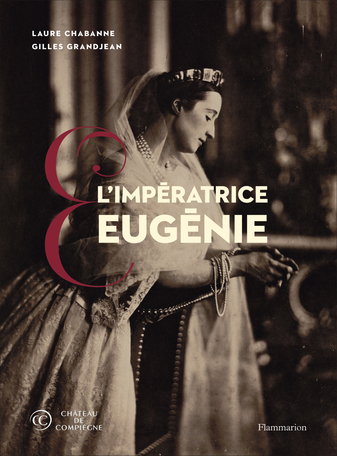 The book written by Laure Chabanne and Gilles Grandjean with brilliants photographs by Pascaline Noack, is a true delight.

Château de Compiègne can easily be reached by train from Paris, gare du Nord in less that an hour.