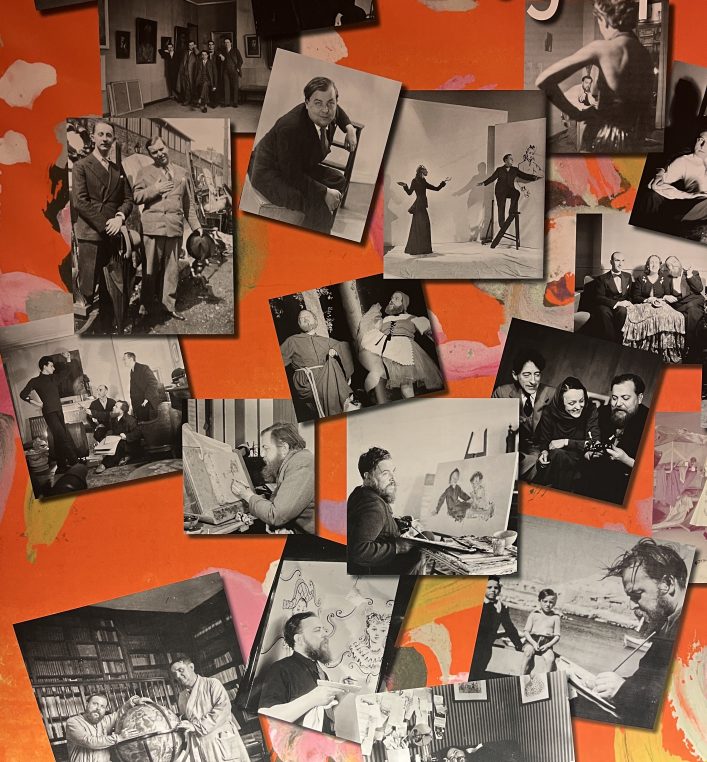 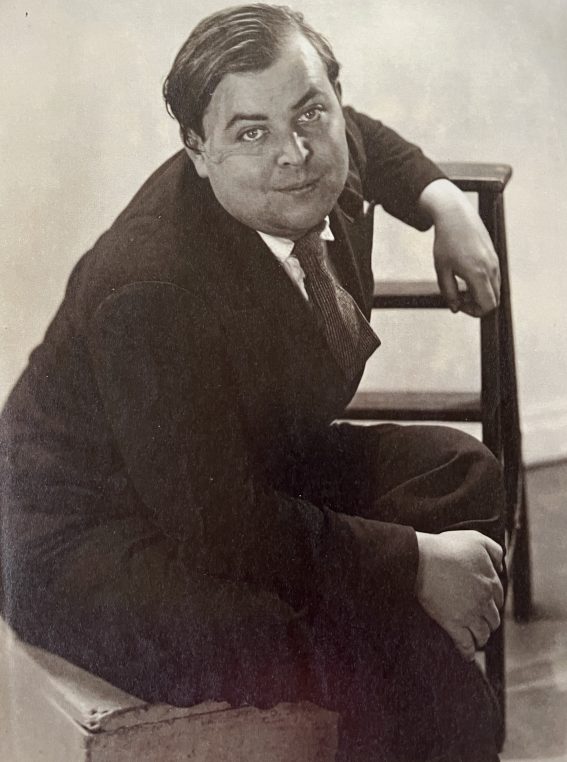 My taxi driver in Evian, Nicolas Fleury, who is on the American football team, holder of the French national title, had never heard of Christian Bérard even though large adds promoting the new exhibition are all over town. But this energetic man, who was raised in the Paris suburb of Aubervilliers, could not stop talking about what a wonderful town it was to live in. Famous the world over for its mineral water and its Women’s golf Open, Evian, population 8 000, is also a cultural town with its magnificent concert hall entirely built in wood, “La Grange au Lac” and its “Palais Lumière“, formerly the thermal institution, inaugurated in 1902. I was there to visit the new exhibition curated by Lausanne based journalist Jean Pierre Pastori on Christian Bérard (1902-1949), one of the most prodigious and adulated decor and costume designer of the 1930-1949 era. The mission of the show is to reestablish his career as a painter, when he is mostly remembered for his intense social life and stage and movie sets and costumes. 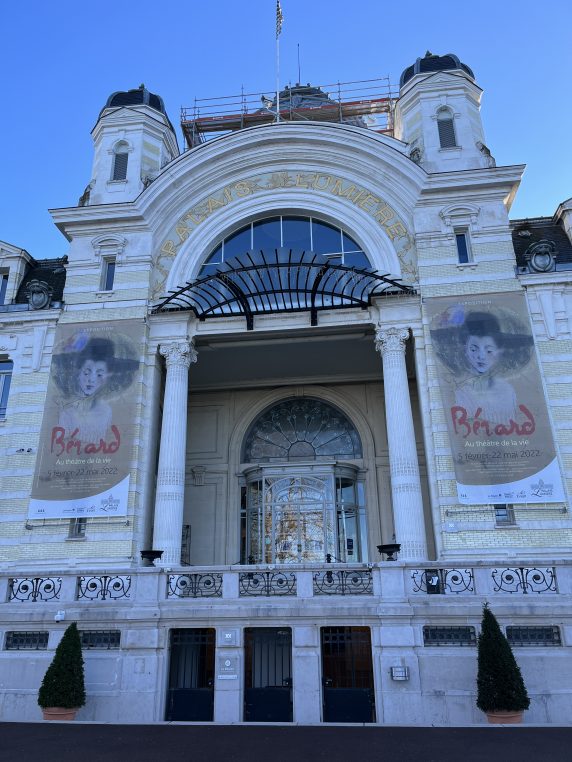 Born in an affluent family, the son of an architect and the great grand-son of Henri de Borniol, the founder in 1820, of the chickest undertakers in Paris, Christian Bérard was nicknamed “Bébé” very early on in his life for his round cheeks and huge blue eyes. He attended Lycée Janson de Sailly, as did Christian Dior, Jean Michel Frank and Julien Green, who would remain his friends all of his very short life. The remarkable photograph by George Hoyninghen Huene is probably the most realistic of him, showing his great sense of generosity and his festive dispositions. In an archive film lent by INA,  Louise de Vilmorin is seen with Jean Hugo and Henri Sauguet, and they talk endlessly about his love of laughing, his extreme kindness, his acute psychological sense and his hyper sensitivity. A particularly moving moment is when Nora Auric (Georges Auric’s wife known as the artist Eleanore Vilter) describes how she was called on his deathbed to do a last portrait of him. “He was still warm”, she says. 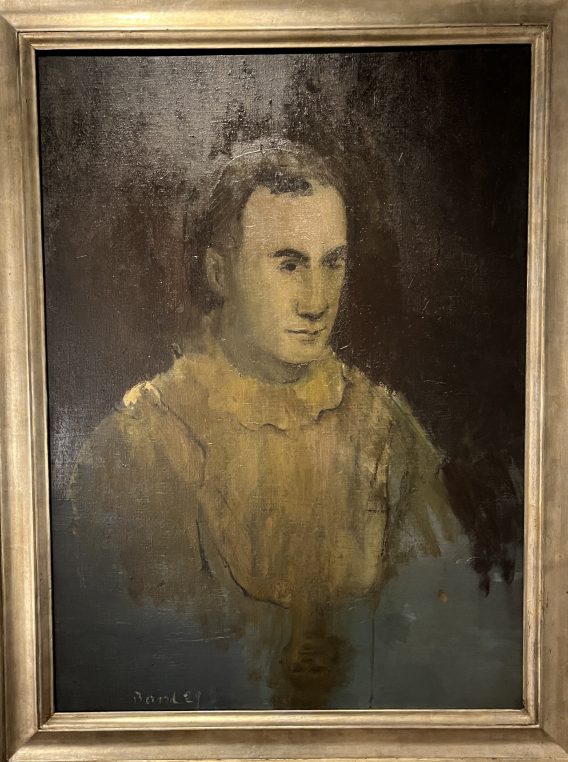 He studied architecture for a little while following in his father’s steps but soon switched to painting, apprenticing with Paul Sérusier and Maurice Denis at Académie Ranson. There, at 20, he met Russian artist Leonid Berman, whom he traveled with for three months in Italy, and discovered painters from the Quattrocento in Florence. He met Jean Cocteau at 23 and they journeyed in Villefranche-sur-Mer: the poet and artist will remain a force behind him all his life, asking him to do the decors and costumes of many plays and films culminating with “La Belle et la Bête”, his most famous film, starring Jean Marais. 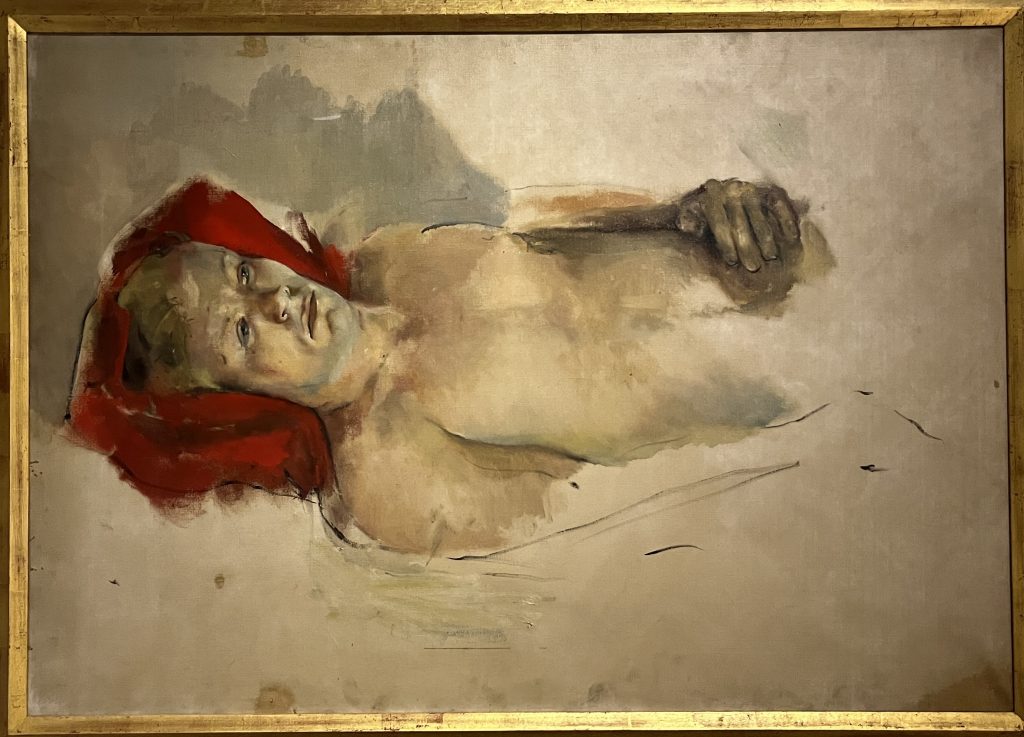 From the beginning, Bébé Bérard was part of a group which included composers Francis Poulenc, Henri Sauguet and Virgil Thomson, who dedicated to him three of his “Five portraits for Clarinet” in 1929. Gertrude Stein collected his paintings as soon as 1927, he contributed to many balls for the Beaumont and the Noailles, but the great love of his life will be Boris Kochno, whom he met as the secretary, librettist and heir to Serguei Diaghilev in 1926. Kochno had emigrated from Russia in 1920 and was immediately involved in the Russian ballets. He also had a torrential affair with Cole Porter. They met again in 1929 at the reception offered by Gabriel Chanel for “Les ballets Russes” and will remain together until his death. 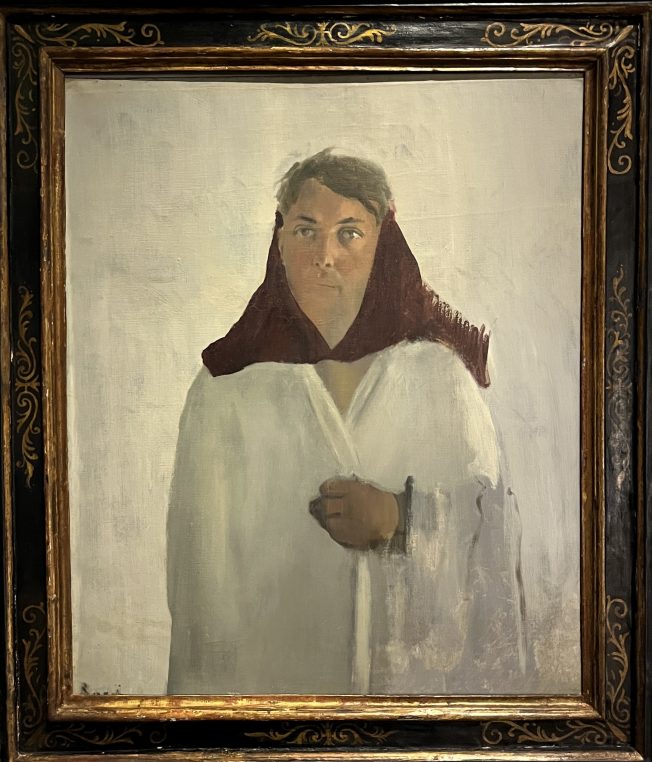 Self-portrait with a shawl, 1933, private collection

He painted at night with electric light until morning. Jean Hugo is very funny in the film, when he mentions that they only met at breakfast when Bérard was living with him in Provence, during the war. Hugo was starting his day and Bérard going to bed. When Bérard made fashion drawings for Vogue, Michel de Brunhoff, editor in chief of French Vogue,  had to appoint a young man, Henri de Neuville, especially to stalk Bérard at home, rue Casimir Delavigne near the Odéon: he was always late handing in his drawings and since he slept during the day, it was hard to catch him. He was always apologetic and so charming that he was forgiven. 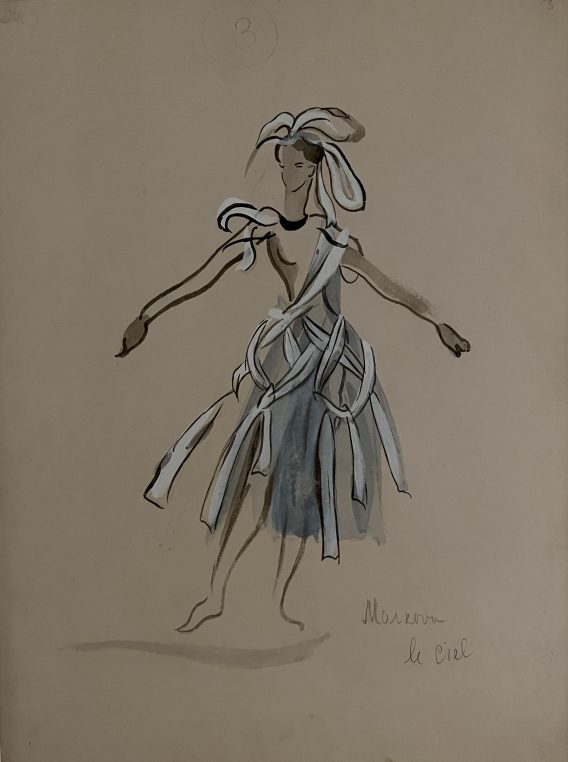 The exhibition is not quite chronological. It starts with his self portraits including an ink of himself on a hearse!,  his childhood drawings at 7,  charming views of the apartment on rue Casimir Delavigne by Alexander Serebryakov, and a large room devoted to portraits of actors in the early 1930’s and 1940’s. A stern portrait of painter Jacques Dupont lent by Musée de Grenoble, is particularly depressing. The beautiful “Red Pillow”, especially striking, it belonged to Julien Green until its present owner acquired it. A few paintings of a child with him on the beach are also intriguing. 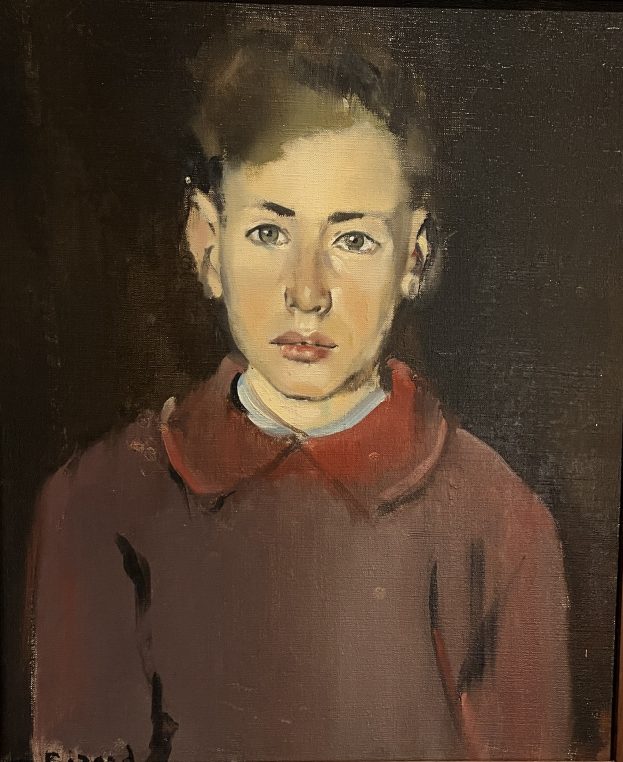 Then start the decors and costumes for the ballet and the theatre (mostly with Jean Cocteau and Louis Jouvet) which occupy a large part of the exhibition in a fairly messy set of panels covered with enlargments of pictures and juxtaposed drawings. I was overwhelmed by these images which did not work together and this is when I sat down to watch the amazing archive film with Louise de Vilmorin, Henri Sauguet, Jean Hugo and Boris Kochno saying how shy Bérard was with his paintings, that he always hid them for the visitors and turned them around so as no-one could see them. Back late from a party, ” He would jump on the paint, and was being born again thanks to the canvas” ” He cleaned his brush on his tuxedo which he was still wearing”  and “He was hiding his paintings as he would his bare body”. 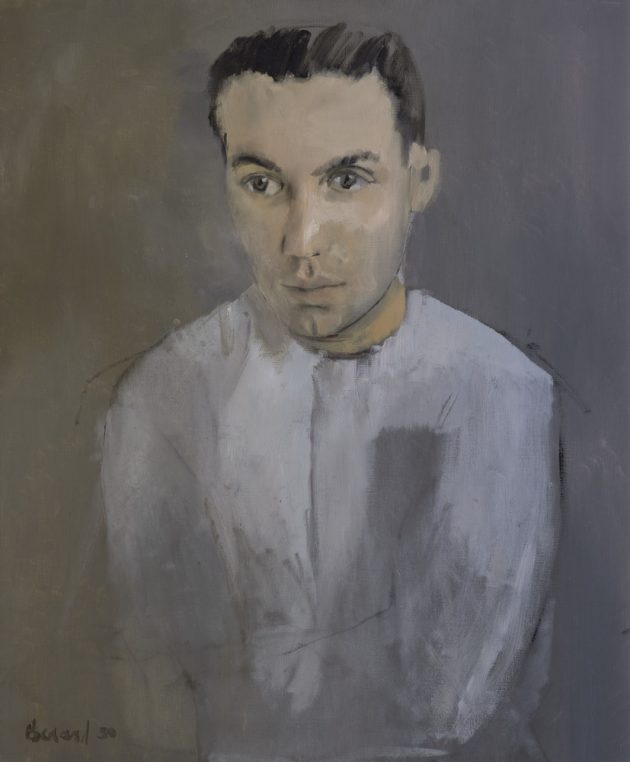 Downstairs, photographs of “Le Théâtre de la mode” which Bérard organized in 1945 are disappointing. But of course the wonderful tiny models created to promote French fashion after the war, which we discovered in 1990, at Musée des Arts Décoratifs, thanks to Pierre Provoyeur, could not travel from the Maryhill museum of Arts (Washington state) where they are kept. A fabric he created for Hubert de Givenchy, his drawings for Vogue, are shown in a clumsy way. Beautiful painted screens are also exhibited in the low ceiling basement rooms. 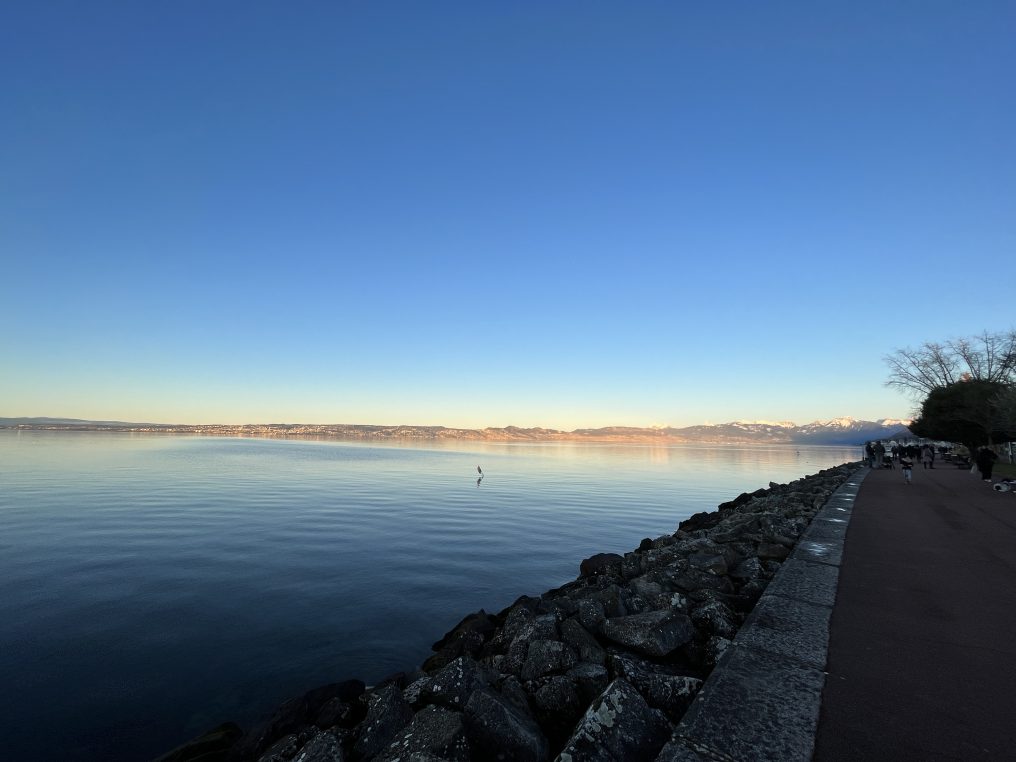 Bébé Bérard was often under the influence of opium and he went four times to get cured in a clinic in Saint Mandé, near Paris. He constantly needed money and privileged quick drawings, decors or costume designs over paintings, which probably cut short his artistic career. This also explains how he died so young at 46, in the middle of a rehearsal at Théâtre Marigny from pulmonary embolism.  His cousin, actress Madeleine Renaud, who was married to Jean Louis Barrault, the director of the company, took his dog Jacinthe, which she cared for until she died. His funeral took place at Eglise Saint Sulpice and not only the church was full but the whole place was packed with admirers. 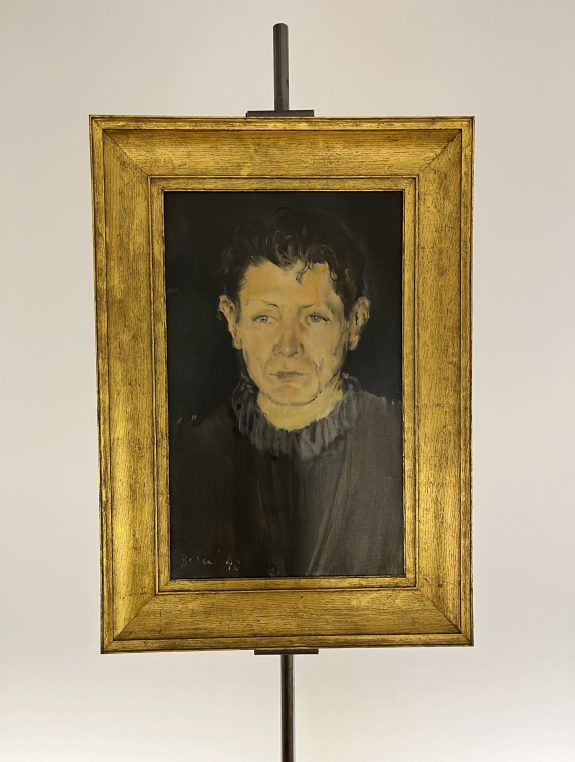 In 1950, a retrospective of his work took place at Musée d’Art Moderne, in Palais de Chaillot and toured to London, Manchester, Boston, Dallas, San Francisco, Santa Barbara, Colorado Springs and New York. This shows how famous he had become by the age of 46!

So this is exhibition is very important and should wake up more collectors and museums to the interest of a new Bérard retrospective. Sadly MoMa did not lend its important double self-portrait “On the Beach” from 1933 which Jean Clair comments in the catalog. And the scenography of the exhibition is not at level with the refinement of the works. Especially all the exceptional ballet paintings which would have deserved a more precious decor. By the way the number of pieces lent by Nouveau Musée National de Monaco mad eye want to go and visit it. 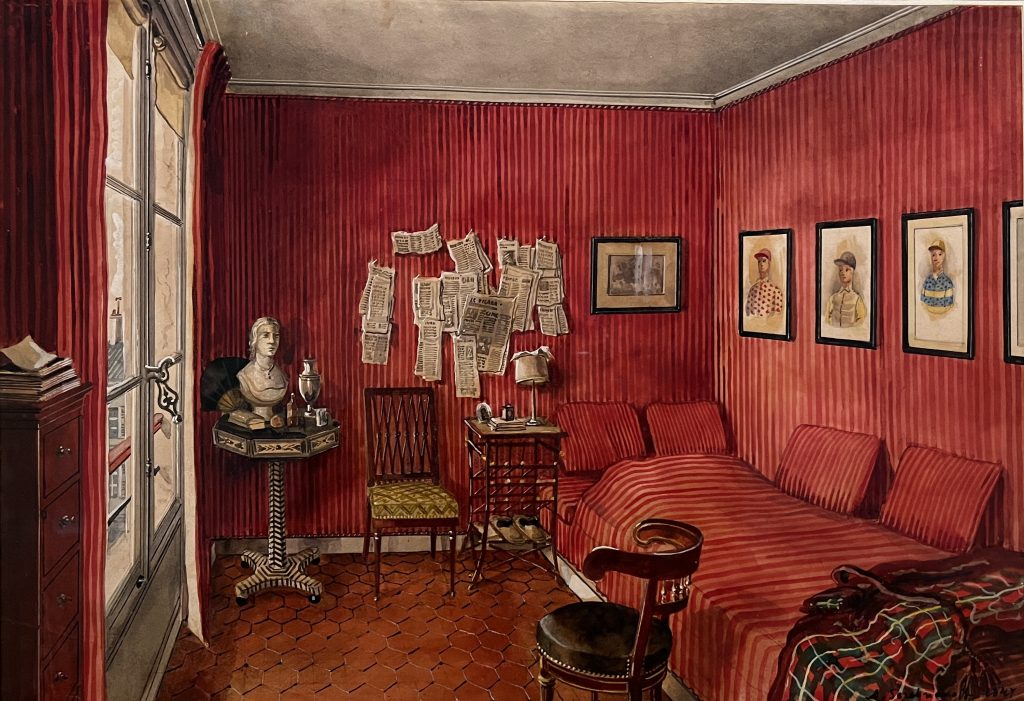 The research done by the two curators, Jean Pierre Pastori and William Saadé is precious and the number of private loans by such tasteful collectors as Pierre Passebon, Patrick Mauriès, François de Ricqlès, Rémy Le Fur or former collection Pierre Le Tan,  attest to the quality of the works.  The catalog (34€) published with SilvanaEditoriale is superb and full of precious information. Do get it if you can’t travel to Evian. Christian Bérard, the Theater of life is on until May 22 at Palais Lumière in Evian. From 13 to 15 May, Les Printemps de la Grange will feature pianist Alexandre Kantorow in Liszt.

I had dinner at l’Aster, next door to Palais des Lumière and was charmed by the chalet atmosphere, the very kind service by young people and excellent cheese fondue. 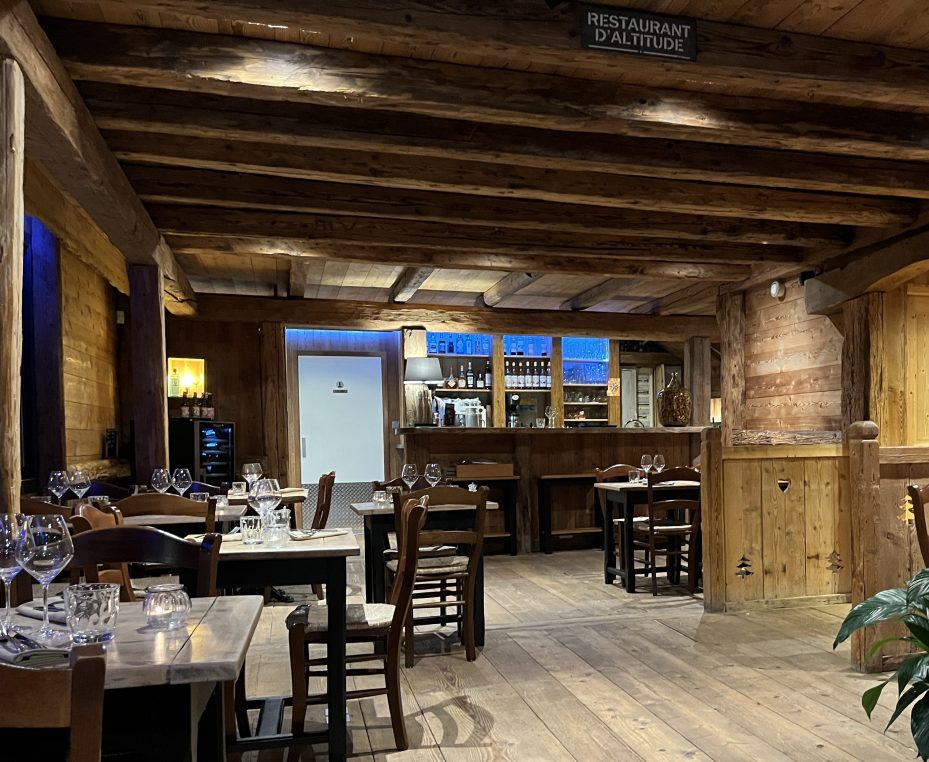 You can access Evian from Lausanne in 25 mns by ferry or from Geneva, 45 mns par car or taxi. There is a direct train from Paris twice a week which takes 4.40 mns.