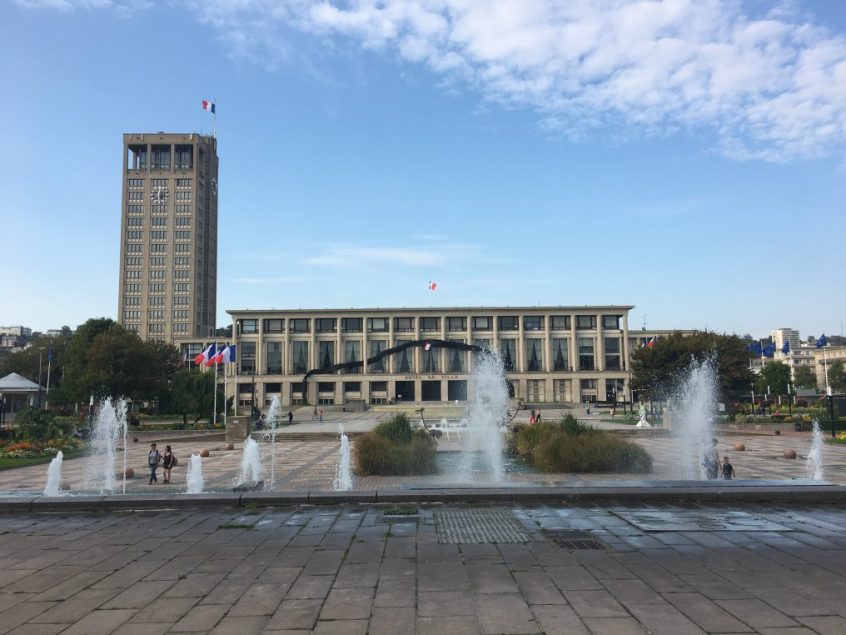 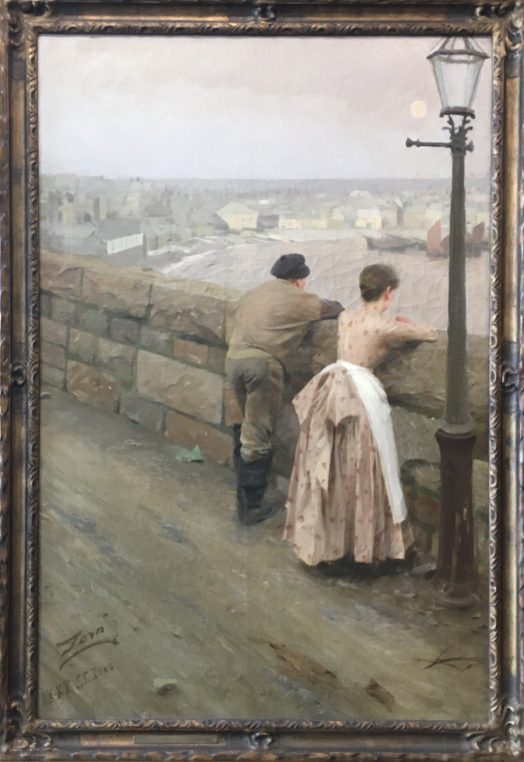 Musée André Malraux in Le Havre is a little glass jewel inaugurated in 1961, overlooking the beach which was still crowded two weeks ago. Temperatures of 25° allowed brave swimmers to enjoy the (quite) warm water of the great tides. The exhibition, “Nuits électriques” (electrical nights), is part of Normandy Impressionniste 2020, a large festival celebrating Impressionist painters, which covers the whole of Normandy (from Mont Saint Michel to Dieppe. And I was completely surprised by the theme, mostly lampposts, painted in France and abroad by artists avid to innovate thanks to electricity. With the visit of architect Auguste Perret (1874-1954)’s concrete post war apartments, it made for a perfect day trip. 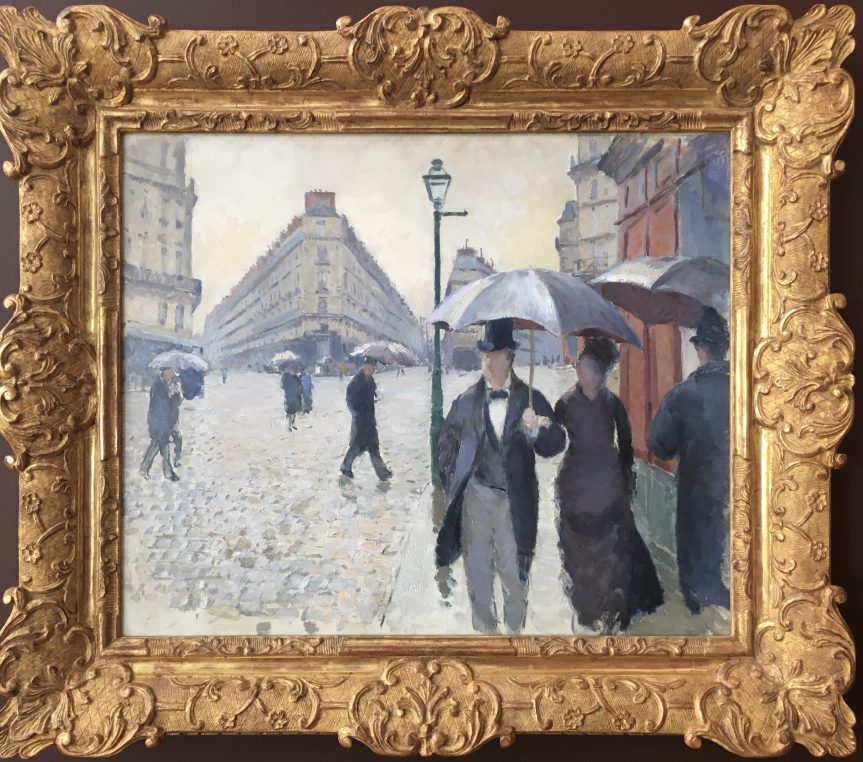 It is quite surprising to enter a show of impressionist paintings and find mostly lampposts… This is how the curators have achieved to impress the public with the importance of electrical lighting of the streets and a new  nightlife observed by mid 19 th century artists such as Van Dongen, Caillebotte, Eugene Jansson, or Claude Monet. In the second room of the show a large selection of Charles Marville‘s photographs is the result of a commission by the city of Paris in Baron Haussmann’ times. As official photographer of the city between 1860 and 1879, he was asked to shoot all the different styles of street lamps which he portrays like human beings. A quote from Emile Magne’s “The Aesthetic of Cities”, published in 1908 in le Mercure de France, glorifies in beautiful words the importance of the Bec de Gaz (gaz burner), which is beautifully designed in the rich areas and more sober in the popular suburbs. 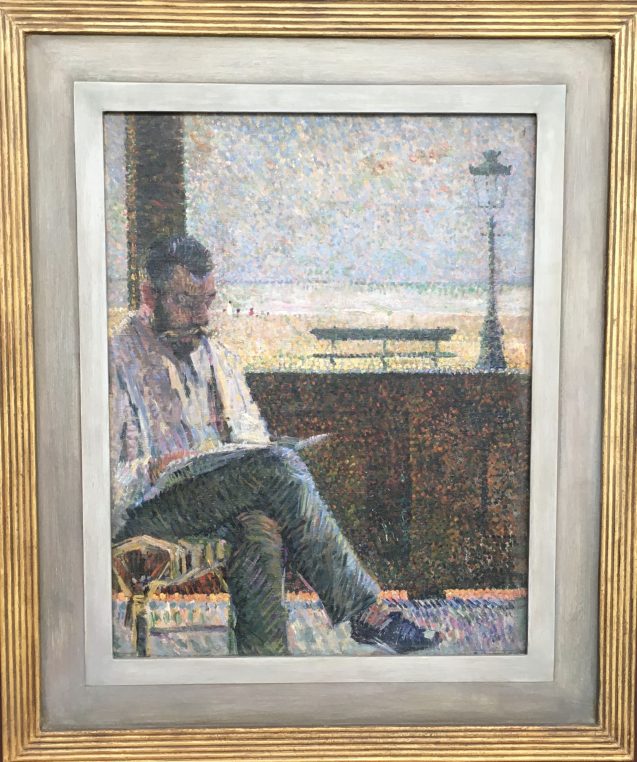 Part of the exhibition is named, “La république des Réverbères” (Republic of lampposts) and illustrates with Felix Valloton “The Street Lamps”, Norbert Goeneutte’s charming engraving of “La Conciergerie”, Henri Le Sidaner, “Place de la Concorde”, more examples of bronze lampposts. The Exposition Universelle of 1900 is also an excuse for painters to revel into colorfully lit sceneries like Maxime Maufra, and a series of paintings in the harbor of le Havre at night is quite mesmerizing. Dutch painter Siebe Johannes ten Cate in 1880, Othon Friesz in 1903, show how popular the city was already. Now that Le Havre is run again by Edouard Philippe, our former Prime minister, it has become the attraction for many tourists. 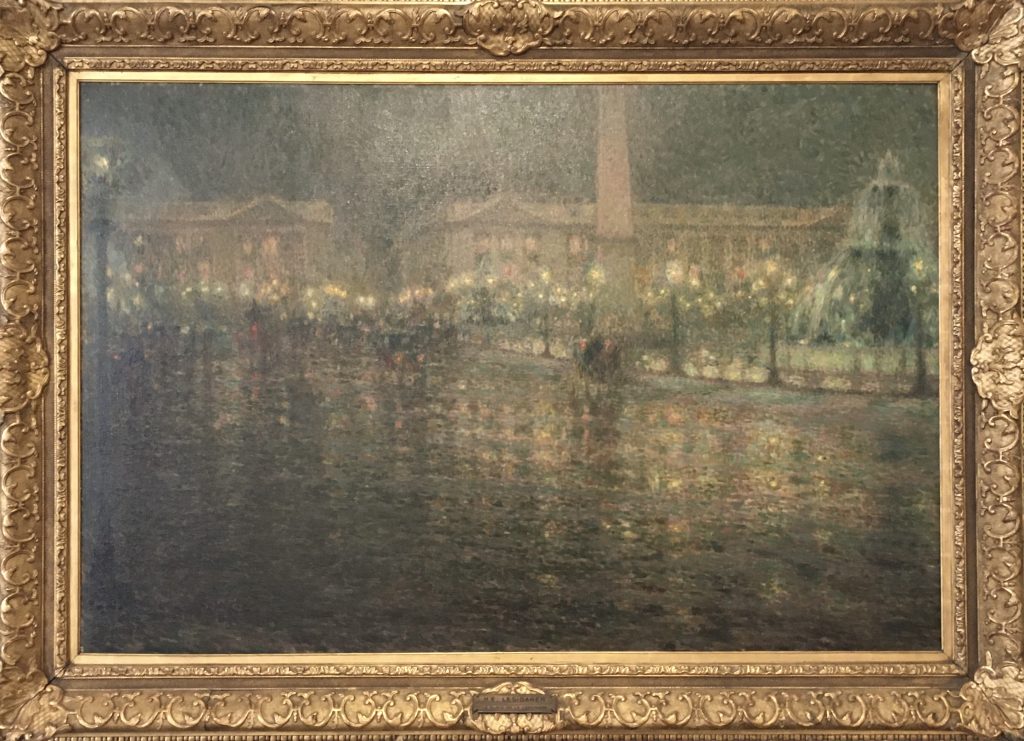 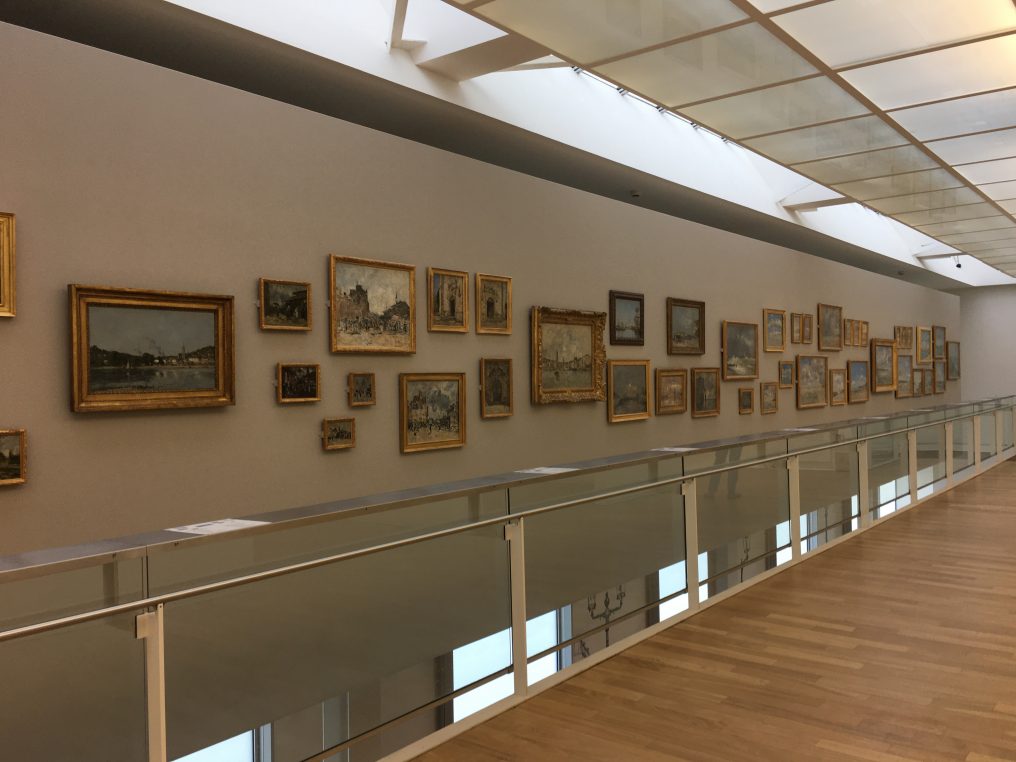 We then caught by chance a visit of Auguste Perret’s apartment, just in front of  Town hall designed by the architect, who taught Le Corbusier on the technique of concrete building. He started the reconstruction of Le Havre in 1948 after it was bombarded by the allies and completely destroyed on 5-6 September 1944. The project of 12 000 apartments over 150 hectares (350 acres) took approximately ten years to complete with a hundred architects involved. In order to give lodgings to the 80 000 inhabitants whose houses were destroyed, he developed a simple industrial technique of armed concrete with columns which support the buildings and there is exactly 6 m 24 between each column. Since there are no bearing walls at all, each flat can be divided as one wishes. They are all very light with large windows and airy. At the moment, they sell for 2 500 a square meter… and their size is usually of 100 M2. 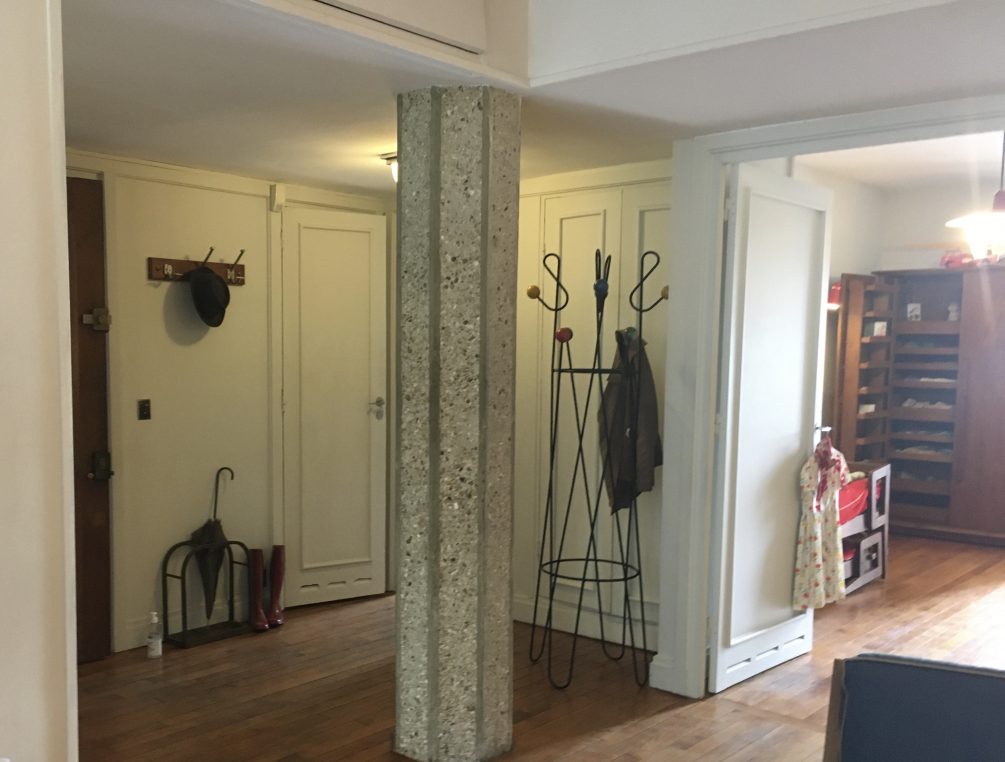 Perret built the town hall which is gigantic and reminds us of Moscow more than of a charming Norman town (Le Havre was the largest communist municipality for thirty years until 1995) and also Church St Joseph. His team built most of the other buildings giving the city a homogeneous look which felt horrible for many years and is now listed by UNESCO.

It is worth visiting this large harbor of 170 000 inhabitants which was founded by François I in 1517 and where transatlantic boats used to leave for New York. Richelieu decided to enlarge the harbor and Madame de Pompadour chose it as a sea destination. It was largely built in the 19 th century and you can find many pretty houses in the quarter of Sainte Adresse painted by the Impressionists. It was heavily industrialized with steam ships and the import of coffee. 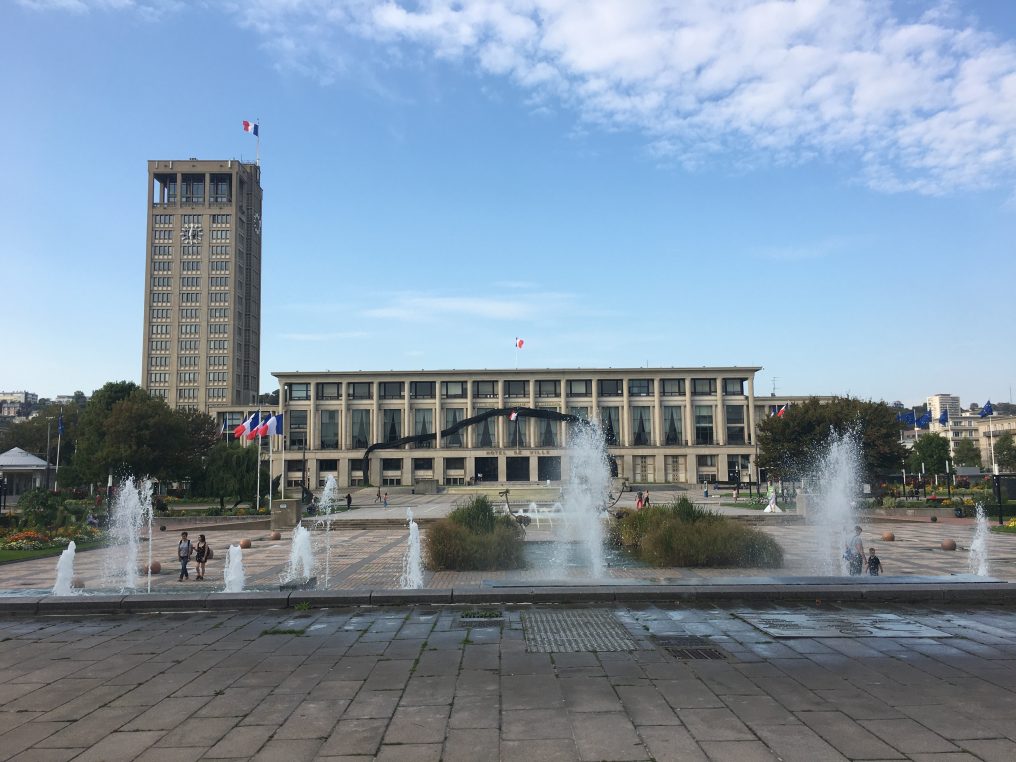 Nuits Electriques at Musée André Malraux until November 1 and August Perret’s apartment all year round and reservations are mandatory at the moment at 02 35 22 31 22.