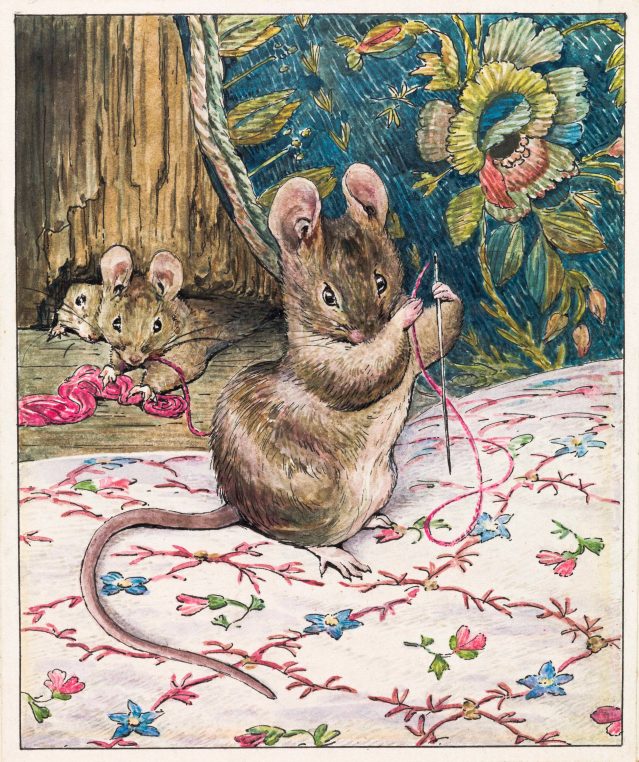 Spending the week end in London was utterly exciting after a three year gap and I was lucky to see both Beatrix Potter‘s show at the V&A and “The Collaboration“, a play featuring Andy Warhol and Jean Michel Basquiat at the Young Vic, the best of English acting! I also loved going to Dulwich to visit my goddaughter’s new house and took the opportunity to see (for the first time) the exceptional Art Gallery of European paintings, founded in 1811. There is not one mediocre painting there! But the train chaos provoked by Storm Eunice created too many frustrations as I was stuck in the middle of nowhere on my way to Gloucestershire. And I found most stores (even Peter Jones) totally empty, maybe due to school vacations? My only regret is not having seen “Belfast“, the new film by Kenneth Branagh with Judi Dench, but it will come to Paris on March 2. 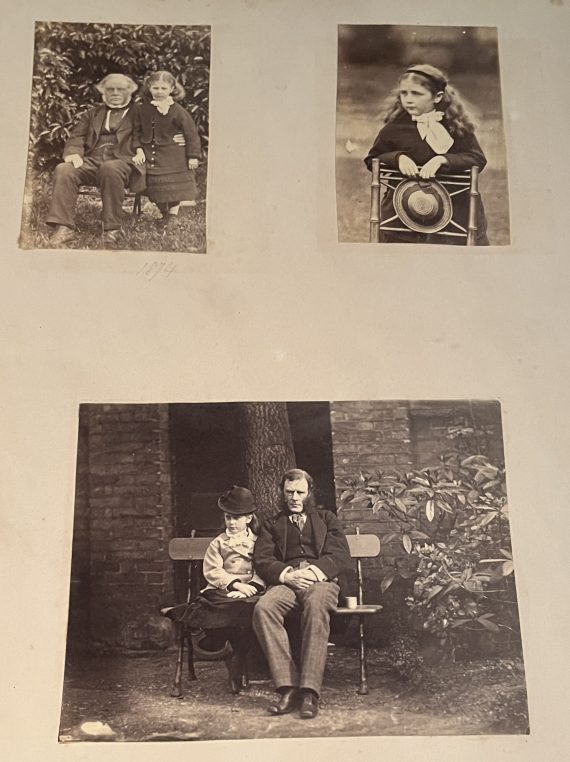 Rupert Potter, Family photograph album, Beatrix is around 8, V&A, given by Joan Duke

The Beatrix Potter show, “Drawn to Nature” is a ravishing moment of poetry with a strong element of environmental trendiness. The creator of “Peter Rabbit” (1866-1943) captivated millions of children around the world with her charming drawings of animals and often threatening stories. What we learn in the exhibition is that she was mostly a lover of nature, saving thousands of acres of wild land in the Lake District and bequeathing her house and property to the National Trust, a major lender (with the V&A), for this exhibition. Although she lived in Kensington as a little girl, she collected pets, rabbits, mice, frogs, hedgehogs which she smuggled in her room. She spent extended holidays in Perthshire, Gloucestershire, Devon, Scotland, where her parents rented houses every summer, and discovered the Lake District at 16, where she would buy a house, Hill Top, in Near Sawrey and become a prizewinning sheep breeder. She spent her childhood drawing and painting under the attentive eye of her father  Rupert (a successful London lawyer) who was himself a talented amateur photographer. 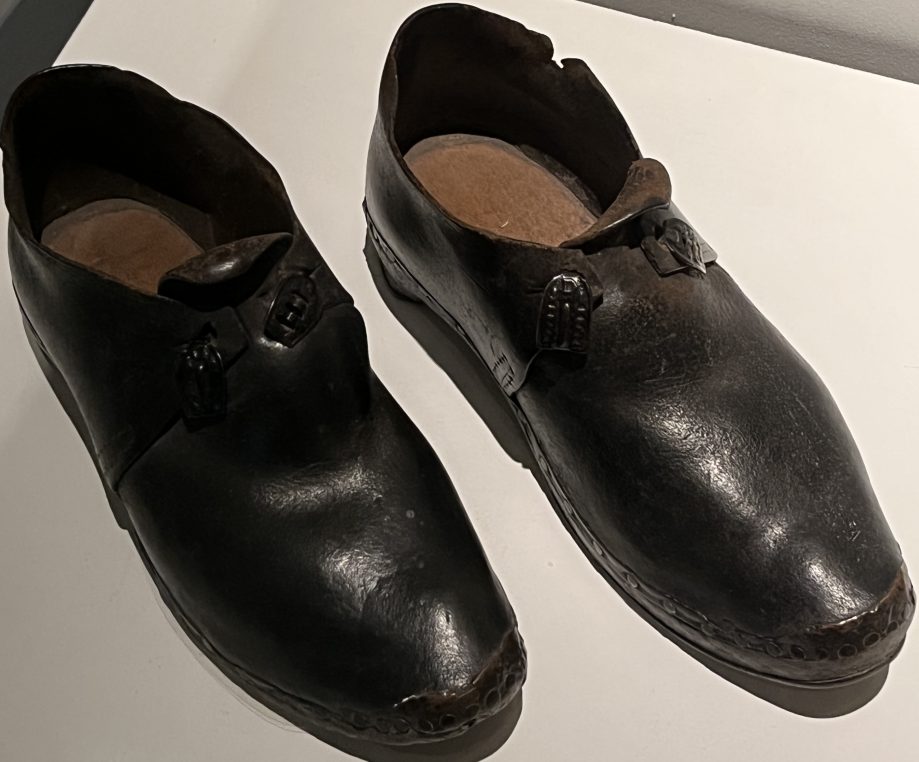 Clogs worn by Beatrix, about 1920, the National Trust

From 1902 to 1913, she dedicated herself to writing and drawing her children books. “The Tale of Peter Rabbit” sold 90 000 copies in 18 months. “Lady Mouse”, “Tomasina Tittlemouse”, “Squirrel Nutkin”, “Benjamin Bunny”, “Jemima Puddle-Duck”…, will happily follow. This extraordinary artist, who “was less acquainted with people than she was with animals… perceived people as animals”, married late at 47, William Heelis, a lawyer from the Lake District, after being engaged in 1905 to Norman Warne, her publisher, who abruptly died of leukemia. 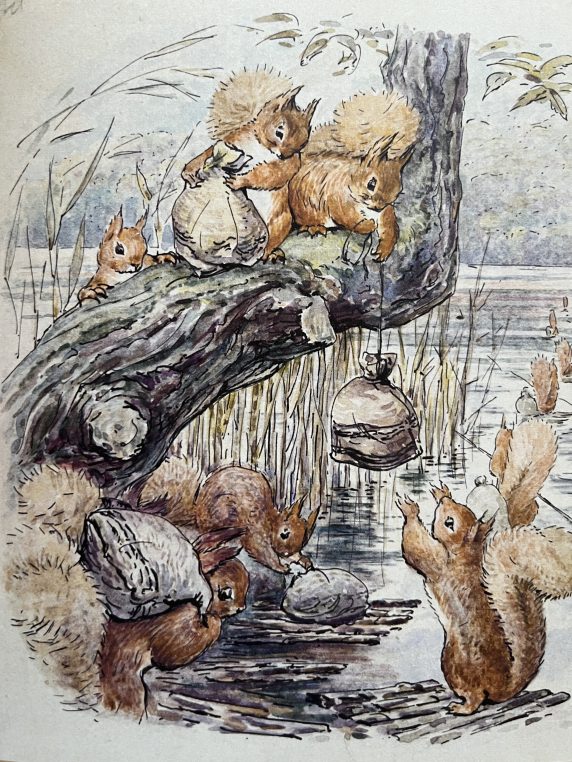 It was particularly interesting to find out about her life and diverse scientific and artistic talents since we mostly consider her in France as a children story teller. Like Saint Exupéry, she was much more than that and a sensitive artist. 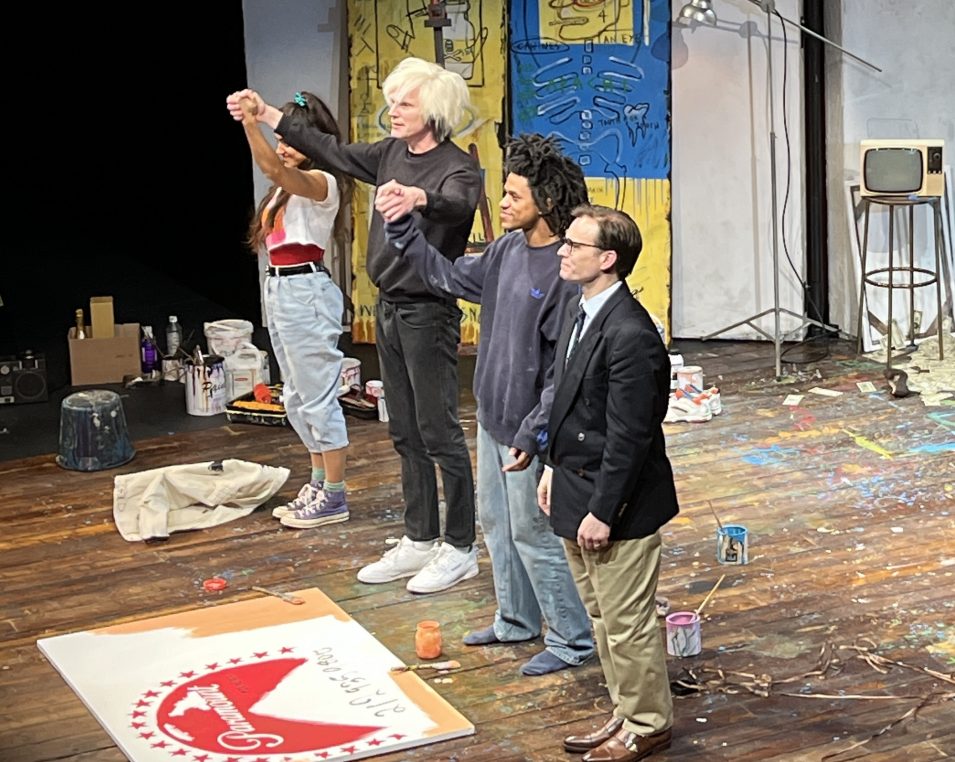 At the Young Vic, “The Collaboration” plunged me back into my New York life when Andy Warhol was reigning over Studio 54. The year is 1984, when Jean Michel Basquiat, the Haitian-Porto Rican “wonder-boy” takes the art world by storm. Italian art dealer Annina Nosei was the first to exhibit him in 1981, to give him a studio to paint in the basement of her gallery,  and to take him to the Documenta in Kassel in June 1982. Soon after he left her to join Bruno Bischofberger, the Swiss art dealer, who features in the play. And he very quickly went from sleeping on the streets to sleeping at the Ritz. Andy Warhol’s career is slowing down a the time and the play is like a boxing match between the 56 year old star and the 24 year old kid. Written by Neo Zealander Anthony McCarten (Bohemian Rhapsody…) and directed by Kwame Kwei-Armah, the fast play (1 h 45 mn) is a constant delight thanks to the genius of Paul Bettany who is taller than Warhol but very thin and convincing, and American actor, Jeremy Pope, a fantastic dancer and mover. 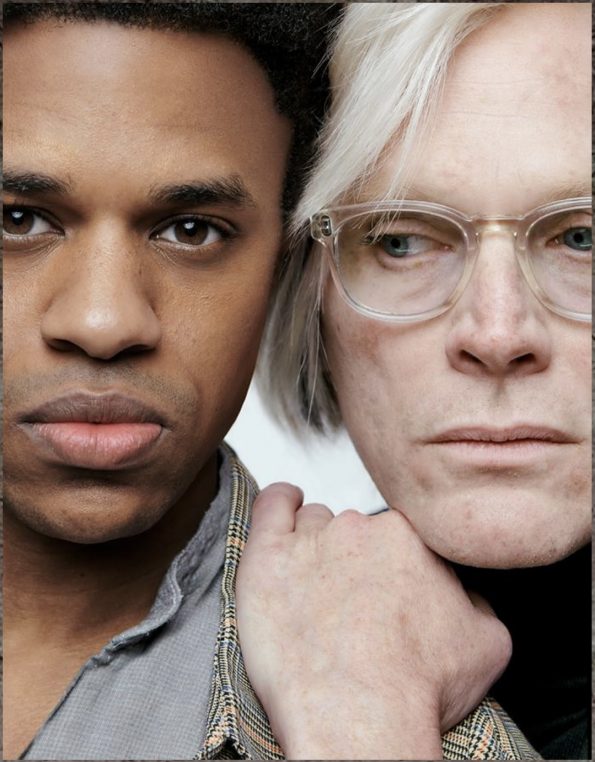 Jeremy Pope and Paul Bettany as Basquiat and Warhol

Don’t hesitate to go early because when you sit in the delightful Young Vic, a disco type atmosphere welcomes you with a lady disc jockey who was dancing in rhythm and images of New York in the eighties were projected on stage. One immediately felt drawn to the period and taken into the mood of the play. The set design and costumes by Anna Fleischle are wonderful including the large fridge which pours out thousands of dollar bills at some point in the show. What is remarkable is the duet formed by the two actors who should go on to perform the play on Broadway later in the year (until April 2 at the Young Vic). 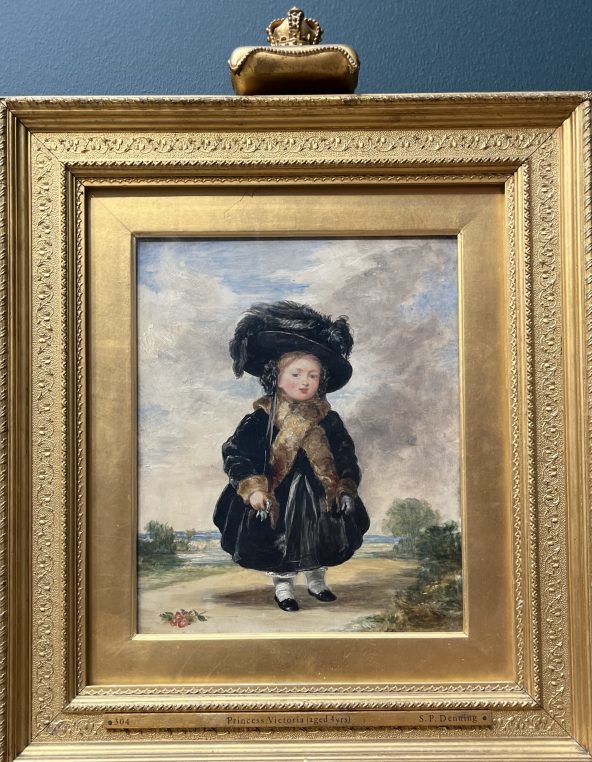 Getting to the Dulwich Picture gallery on the train followed by a ten minute walk in the storm, was challenging, but once I got there the superb collection won my heart over. There is not one mediocre painting in the gallery which is devoted to Flemish, French, Italian and Spanish works of 17 th to 19 th century. I particularly loved the three Canaletto paintings of the Thames (two belong to a private collection and are on loan), the Rinaldo and Arminda by Nicolas Poussin, two ravishing Raphaels, the Flower girl by Murillo and the 1596 Elizabethan portrait of the wife of the founder of Dulwich college, Joan Alleyn. 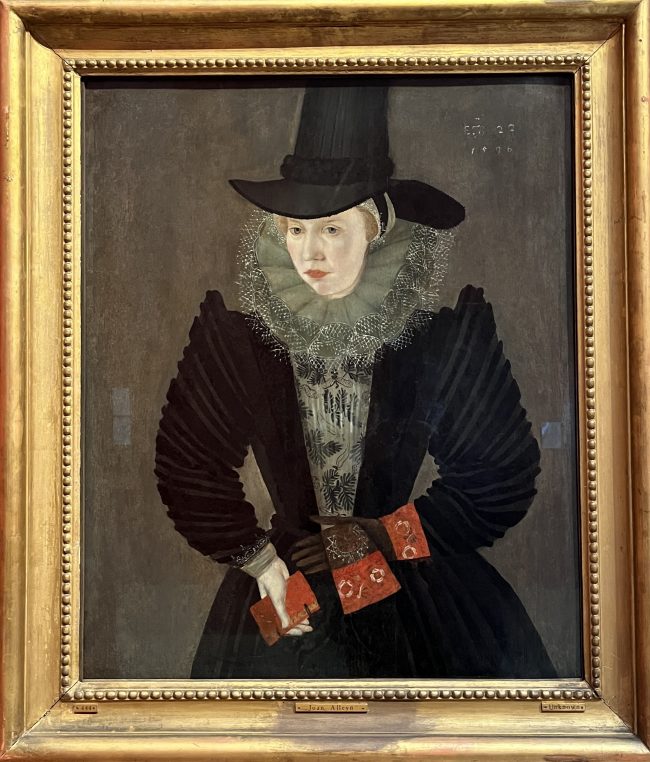 British School, Portrait of Joan Alleyn, wife of the founder of Dulwich college, 1596

Dulwich Picture gallery was founded in 1811 by a gift from heart dealer and collector Noël Desenfans, who came to England at 25 from France, met his wife Margaret Morris through his teaching of French and launched a successful business as an art dealer. He took into his protection Francis Bourgois who had lost his mother at 15 and trained as a painter and subsequently collected and worked with him. The gallery was designed by Sir John Soane. British paintings were later added to the collection by William Linley and Charles Fairfax Murray. 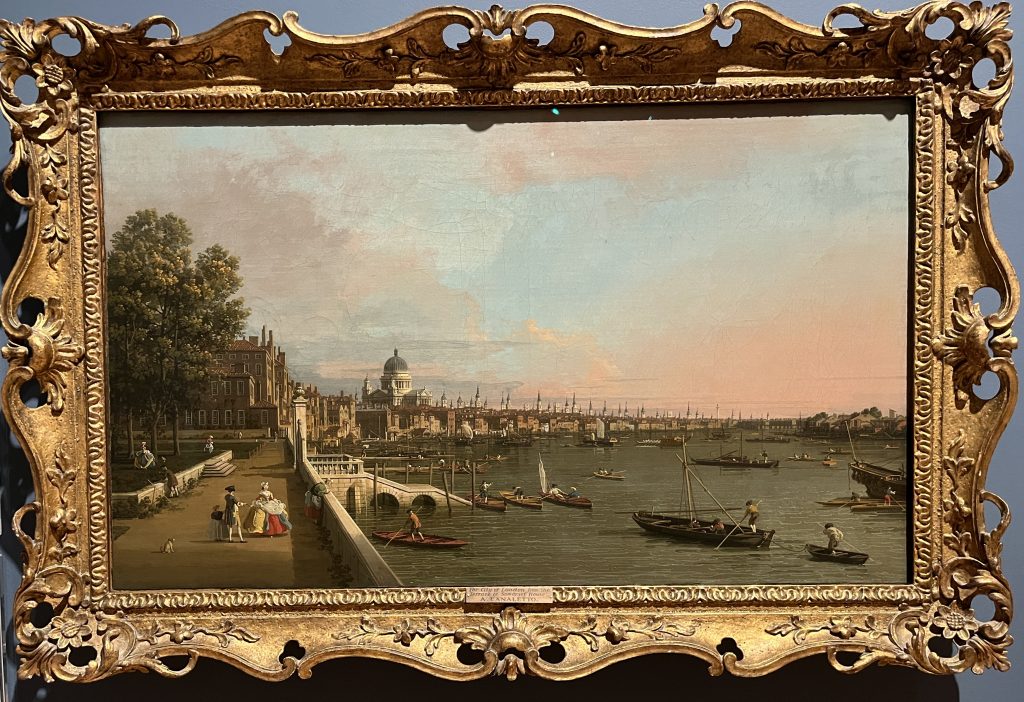 Canaletto, The Thames London from the Terrace of Somerset ouse, the City o London in the distance, c 1750, Loan form a private collection

The gallery is a perfect college museum with just enough treasures to keep you happy and not tired. An extraordinary memento mori, “The Judde Memorial” was intended to commemorate a marriage. It includes a skull and a corpse, and served as a symbol of the couple’s piety and a reminder to be pious in their new life…This is quite far from our wedding celebrations of today.  Portraits by Lawrence, Hogarth and Gainsborough helped me to feel totally happy and I had a few carrot and lemon cakes at the lovely cafeteria, which protected us all from the raging storm. 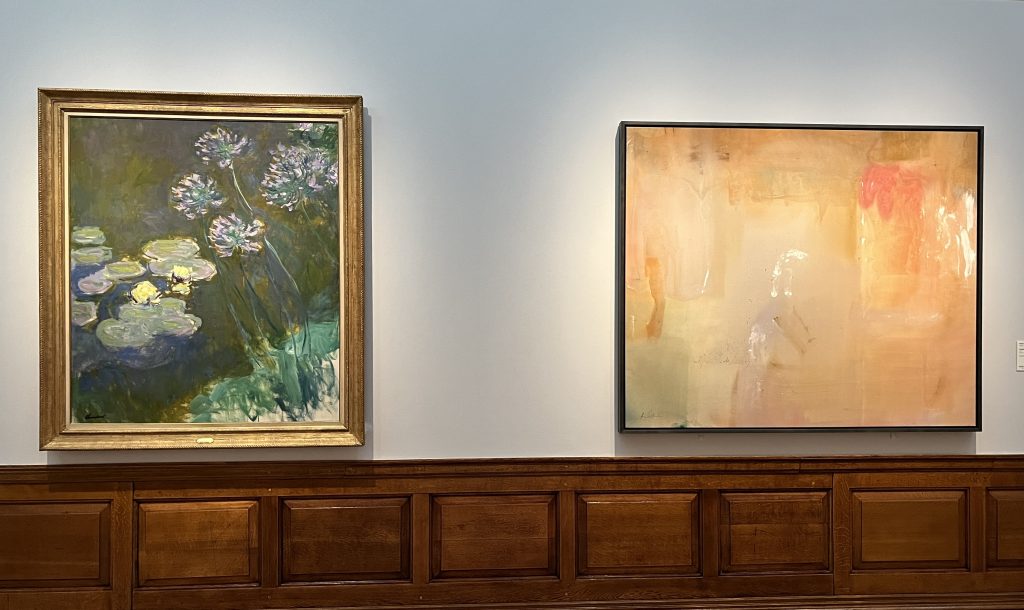 Prints by American artist Helen Frankenthaler were the topic of the special exhibition twinned with a beautiful painting by Monet lent by Musée Marmottan in Paris (until April 18).

Dulwich Picture gallery is half an hour from Sloane square in a taxi and a little longer on the train via Victoria. It is a jewel not to be missed next time you are in London.

6 Comments on “In London, great excitement makes up for train disruptions”