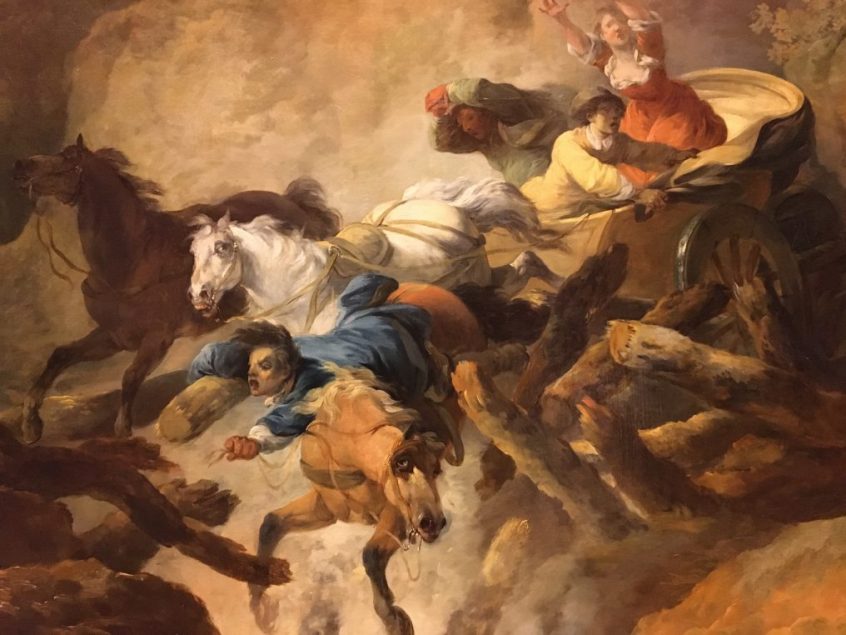 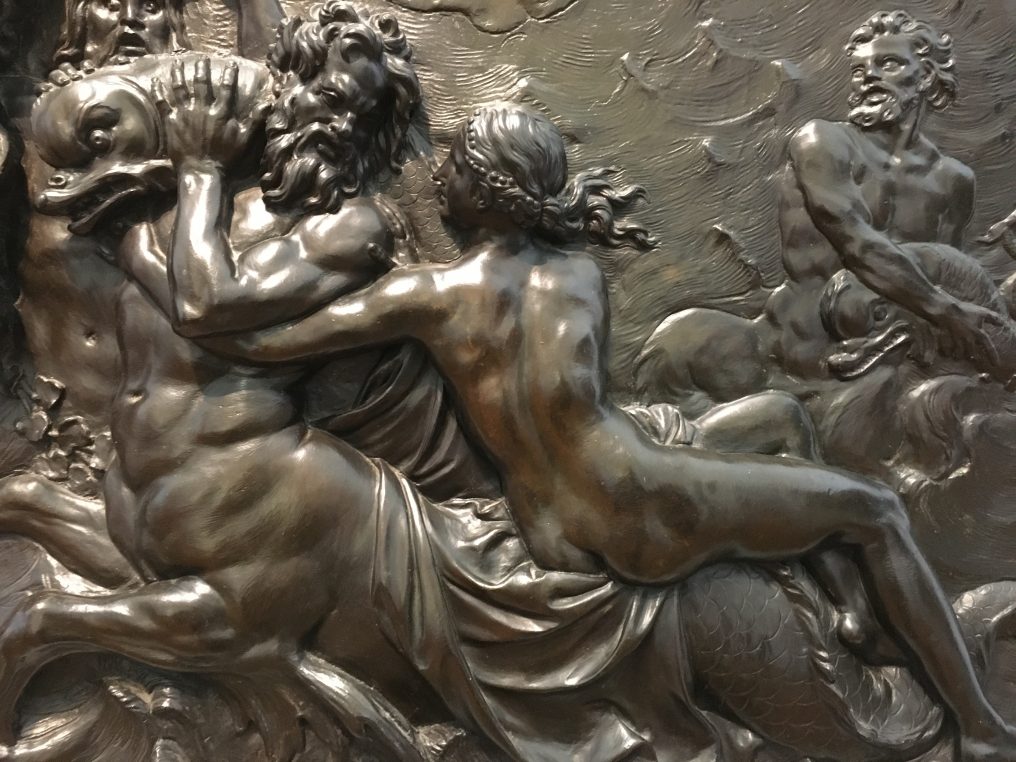 Visiting Rennes’s Musée des Beaux Arts had been on my mind for a long time, but for some reason, one never stops in the capital of Brittany and it is a major mistake. This time, the opportunity of meeting Guillaume Kazerouni, the man in charge of its ancient arts collections, convinced me. This impish hyperactive scholar, has a reputation of positively upsetting the art world and I was not disappointed! He is one of the rare exceptions in France to be running an art department in a major museum, without being a titled curator. Born in Iran, he emigrated at 11 and has worked in multiple arts venues, at the Louvre and at the Sorbonne, editing books and writing many scholarly articles. He has started a communication campaign called “Et si on parlait d’art” (why not talk about art) where he picked 34 shops in Rennes and asked their owner to choose an artwork in the museum. It’s a winner/winner project, especially since entrance to the Museum is free. 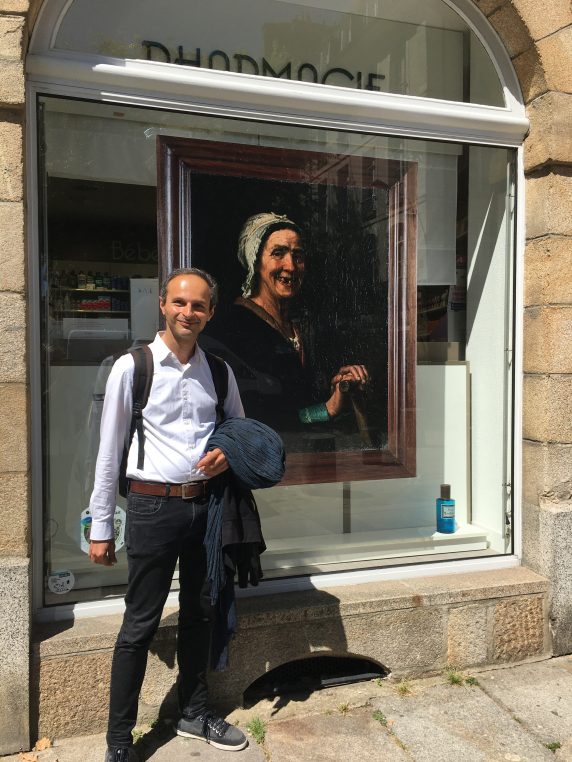 Guillaume Kazerouni in front of a poster of Narcisse Chaillou’s “Portrait of my nurse”, 1882, chosen by a chemist, 1 rue du Chapitre

When you walk into the museum, you are greeted with kindness and attention and in every room, a guard is happy to inform you, a rare event in France. I was immediately struck on the first floor of the permanent collection by two Coysevox bronze bas-reliefs of incredible beauty, made for Louis XIV’s equestrian statue in Rennes. At the time, Brittany was still independent from the rest of France and wanted to keep the king in good spirits. He is portrayed as domineering the Seas. 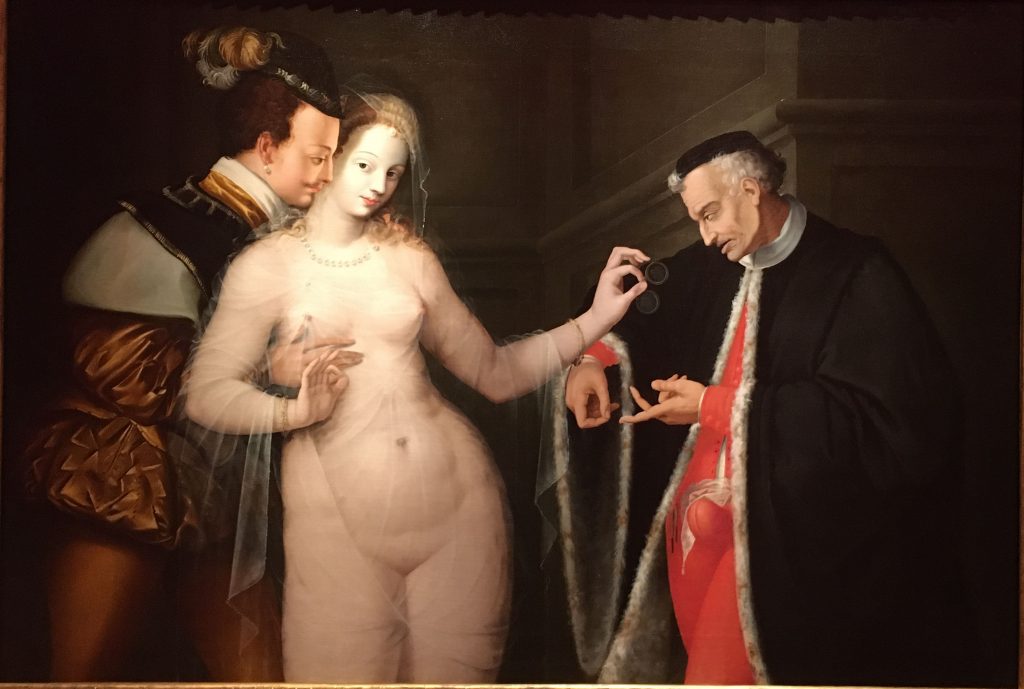 A ground floor exhibition puts forward all the works offered either by artists or by benefactors over the years. They include a  series of 250 drawings by Félix Jobbé-Duval, an oil painting by Roger Edgar Gillet, contemporary works by Loïc Le Groumellec, Jean Charles Blais, Raymond Hains who all come from Brittany and are now world famous. 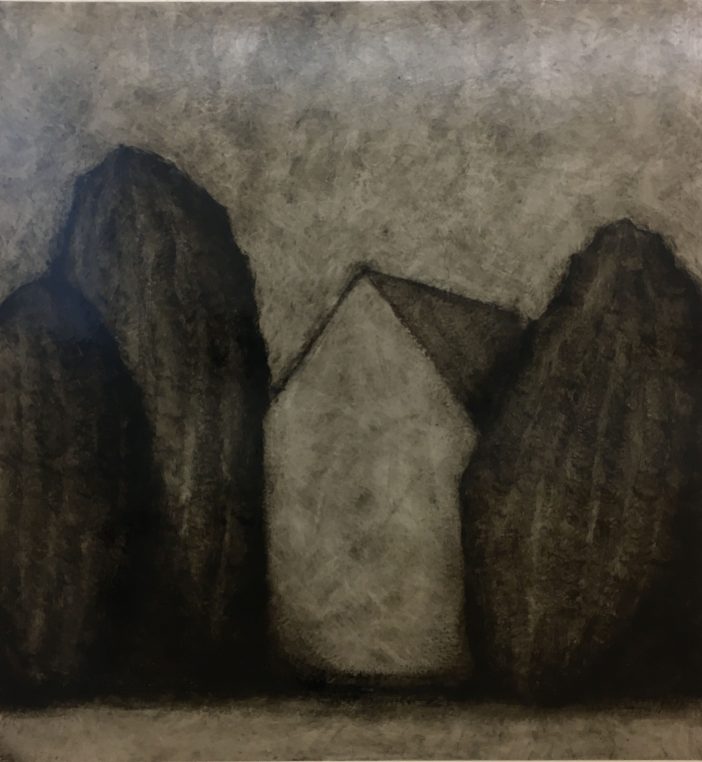 The number of incredibly precious paintings in this museum is astounding and we know many of them already, because Rennes has a generous politics of lending. “The Lady between two ages” is one of my favorite since I saw it at Musée d’Ecouen a few years ago. The collection of 17 th century paintings includes Simon Vouet, Rubens, Georges de La Tour, Pietro de Cortone, but with its two Ribera, and its beautiful Veronese, the 16 th century is also well represented. 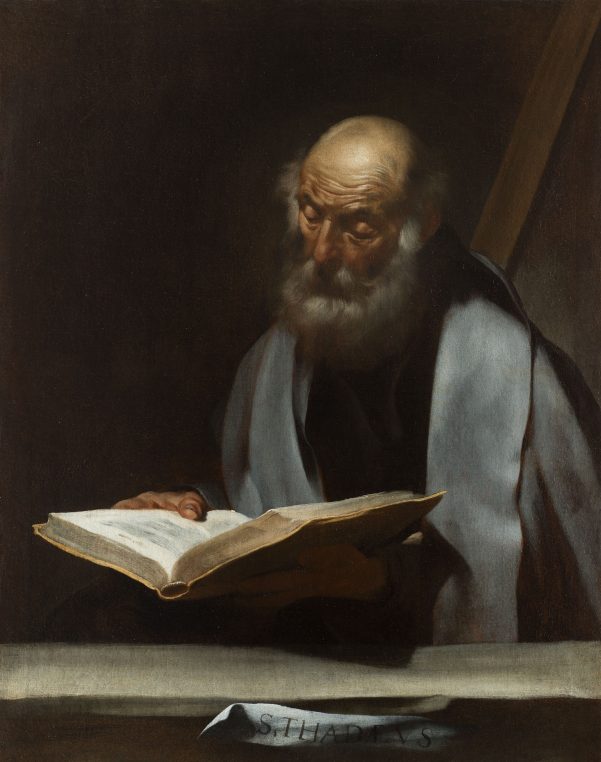 There are so many treasures that it is hard to choose but the “Tiger Hunt”,  by Rubens , the series of works by Nicolas Coypel and Gaspar de Crayer (discovered in Cassel three years ago), the room with four large “Disaster” paintings by François Joseph Casanova, count among my favorites. Among lesser known artists, there are a few local painters from Brittany like Camille Godet who decorated Rennes’ town hall in 1922. 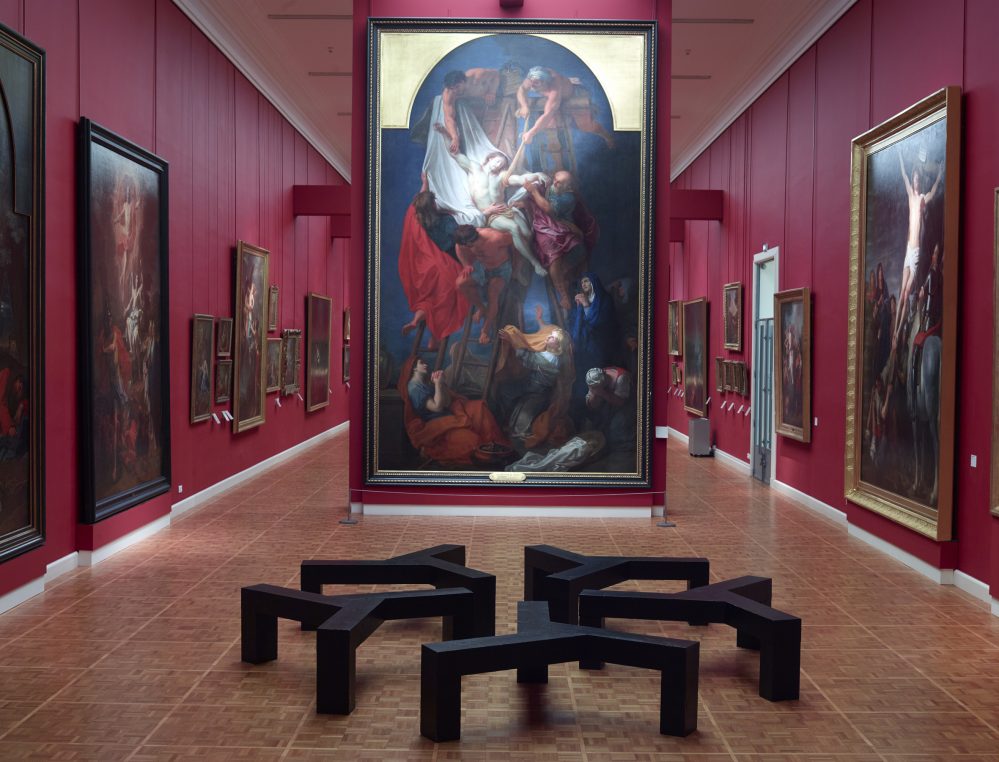 How do you convince the inhabitants of Rennes to enter their museum and enjoy it as much as they enjoy shopping on the pedestrian streets? This is one of the battles that Kazerouni has been fighting since he arrived seven ears ago. He started giving free conferences at 7 pm on Wednesdays for amateurs. 120 attend them every time. He restored religious paintings which he found in the reserves and hung them in the churches near the museum. And now this operation with the different shops.  His greatest joy is the florist from Akane who picked a very dark painting, “Scene of the Massacre of the innocents” by Léon Cogniet. She made a fabulous decor with dark flowers around it. 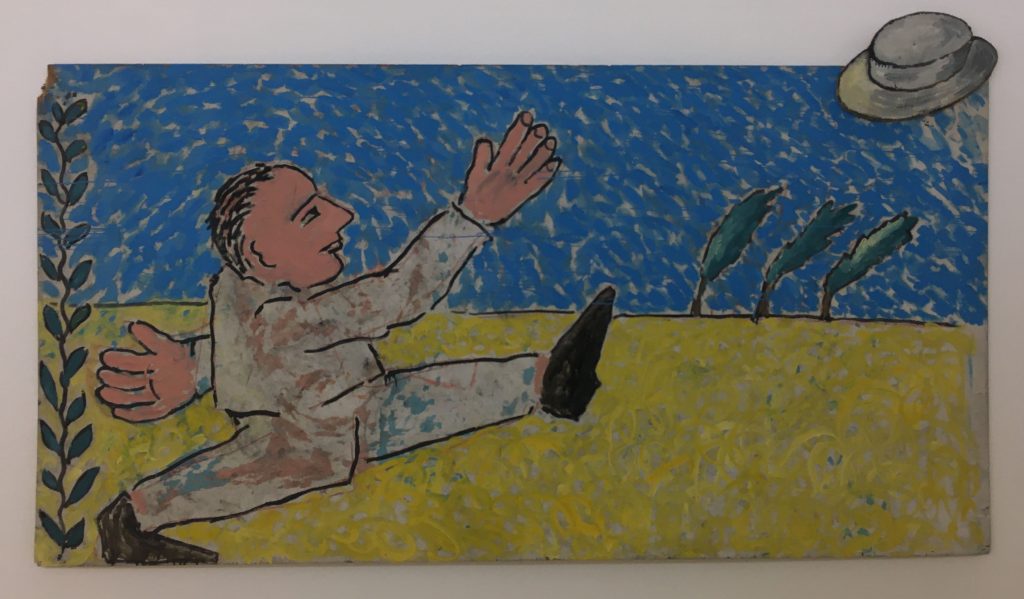 The Georges de La Tour depicting a newborn, was chosen by a maternity clothes shop. The cooking firm Bulthaup chose  Jacques François Amand’s “Preparing lunch” and Richard Hall’s “Manual School for little girls” was picked by a seamstress “Chouette”. The catalog is for sale for 3€ and is hilarious. This is a great publicity for the most famous works of art and the retail of the old town. 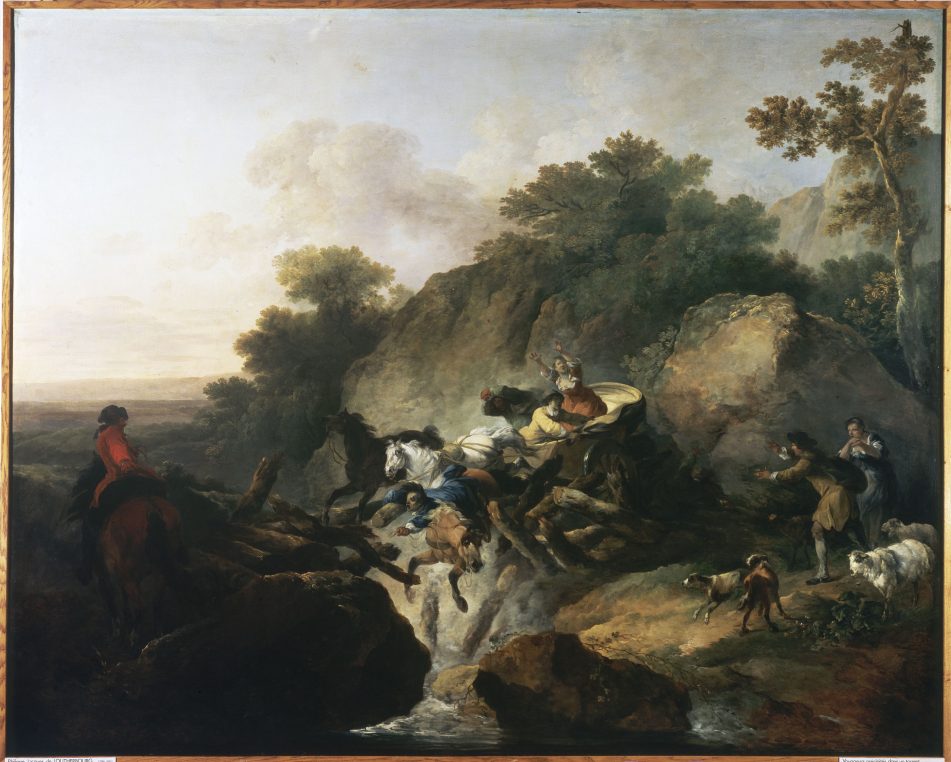 François Joseph Casanova, “Rupture of a bridge” from the “Disaster” series, 1775

So try to go to Rennes if you are ever near there, and stop to visit this fast moving museum. It is free and in the center of town which is mostly pedestrian… The old town is very pretty with the Parliament of Brittany (recently restored after a fire), the cathedral of course and even an Hermès shop.

I stayed at the modest Hotel de Nemours which was trendy and very sweet.

2 Comments on “In Rennes, an exceptional museum with initiative”