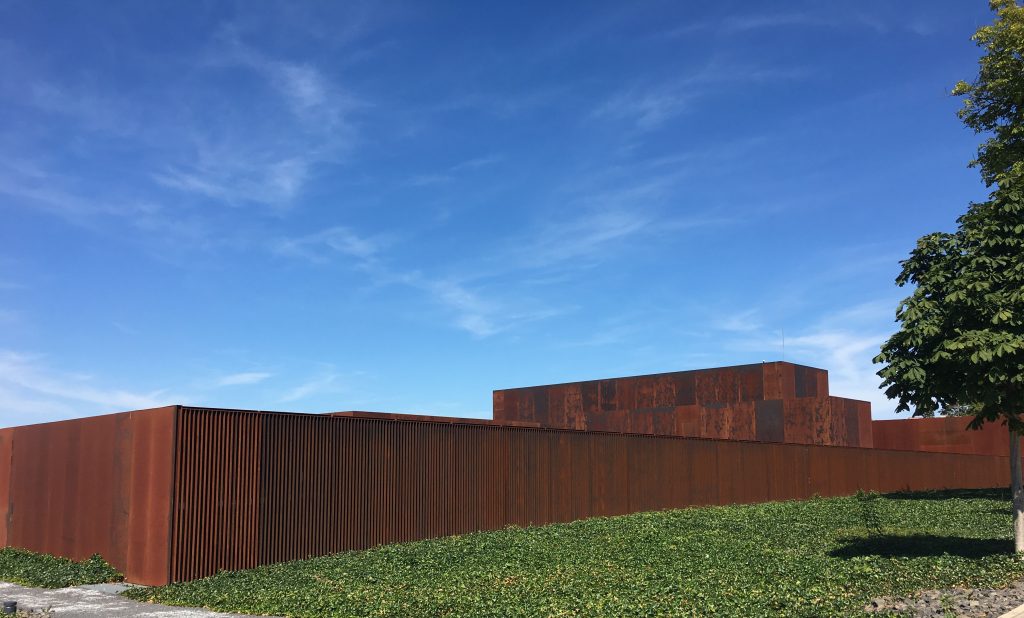 How does a city with 56 000 inhabitants attract a million visitors in five years? Rodez, where French painter Pierre Soulages was born a hundred years ago (next December 24), is a city in the middle of Aveyron, near the Lot and the Creuse. That is, in France profonde (deep agricultural France), where beef comes from Salers, cheese from Roquefort, knives from Laguiole and gloves from Millau where Sir Norman Foster designed the most beautiful viaduct. But thanks to the “Bilbao effect” (created in 1997 by the Guggenheim museum designed by Frank Gehry), Rodez is now an arts destination and a major one, thanks to its five year old museum. 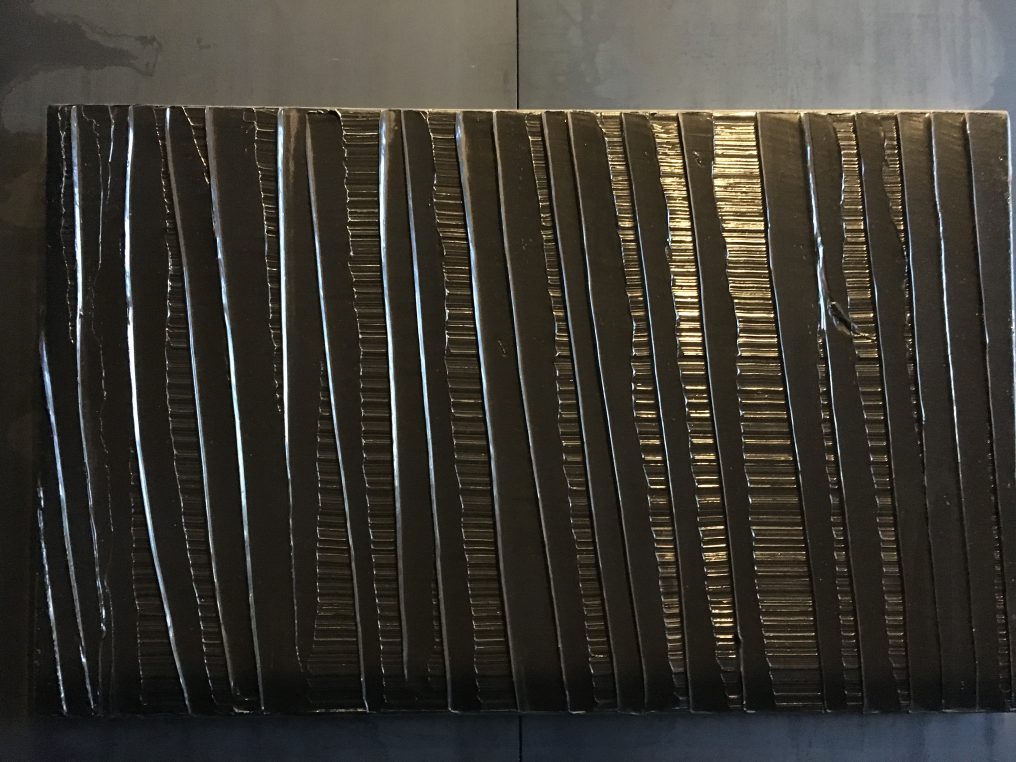 The same year 2017, the brilliant Catalan architects, Ramon Vilalta, Come Pigem and Rafael Aranda from RCR arcquitectes won the Pritzker Prize, Michel Bras, the famous chef from Aveyron, was made Best chef in the world! He runs the Café Bras at Musée Soulages of course.

But there is no fuss in this beautiful and austere building made in Corten steel. Its chic and power reside in the very pure lines and incredibly smooth stainless steel inside the building. Located in the gardens of Foirail, it is a transition between the old Rodez and its magnificent red cathedral, and the view on the horizon. 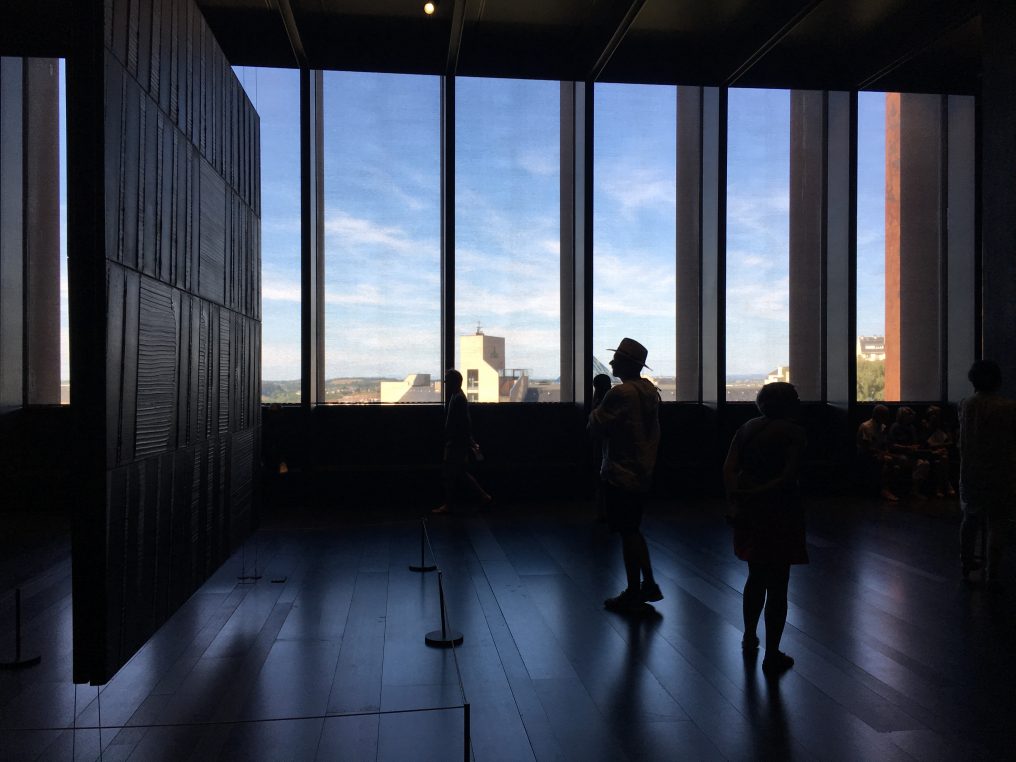 Inside the largest black room, the city glows through the window

All of Soulages’ paintings are black and the choice of using dark steel and white painted walls is perfect to enhance the beauty of the artist’s work. Born in Conques, where he designed, in 1994, 104 windows for the church of Sainte Foy (a whole room of the museum is dedicated to the project), Soulages now has a corpus of 1700 paintings, sculptures and works on paper. He has given 500 pieces to the museum under the condition that he could oversee the architecture of the project. It is thanks to this collaboration between city, region, ministry of culture, the architects and the artist, that the project is so successful. A true miracle.

Three paintings with Brou de noix (walnut juice) on paper, 1949, were restored thanks to BNP

The hanging of the paintings changes every year so you can go back and see different works.  There are many lithographs and works on paper which my traveling companion loved, but also very large paintings with heavy glossy paint. I just adored the place and most visitors seemed to share my feelings. What I liked is that the public is both very popular and made of art lovers

who have travelled a long way to come to Rodez. We stayed in a funky medieval guest house, Chateau de Canac,  just outside in Onet-le château, which was invented three years ago thanks to the museum. The local tourist industry has exploded in the last five years. 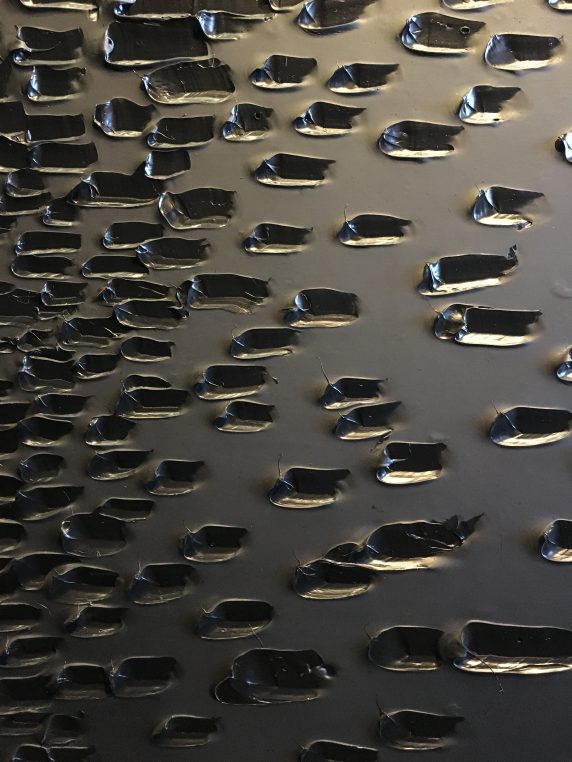 Musée Soulages in Rodez and café Bras. And for the Spring of 2020, in Paris at Bourse du Commerce, Fondation Pinault has hired Michel and Sébastien Bras to run its restaurant!

3 Comments on “In Rodez, Pierre Soulages has set an example for all”