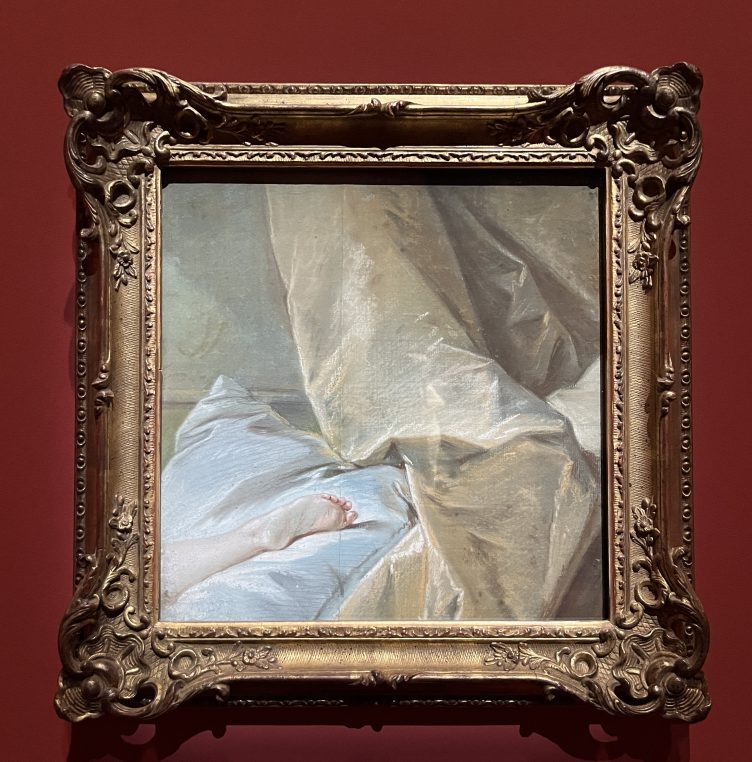 The Engineer Passemant’s Astronomical clock, took 35 years to make with clockmaker Dauthiau. Bronzes are by Cafffiéri. It was installed in Versailles in 1754 where a special drawing room is still dedicated to it. It was restored by Rolex

It was particularly difficult to access château de Versailles this time because of school vacations and even though we had booked tickets, the line to enter the castle was going all the way to the main gate… So be prepared. But once inside, the magic of the Sun King always operates even though we were there to discover his great grand son’s Louis XV’th world. The decor is very classical and most rooms predictable except for two spectacular spaces, the corridor with the “Exotic hunts” by François Boucher, Charles Parrocel,  Carle Vanloo, Jean François de Troy, Nicolas Lancret and Jean Baptiste Pater, which were commissioned for Versailles’ little gallery in 1735. Interestingly they were war scene painters not animal specialists. The other fabulous room is the last one with the famous commode by Antoine-Robert Gaudreaus and Jacques Caffiéri delivered for the king’s bedroom in 1739. It was exceptionally lent by the Wallace collection (along a family painting by Largillière) and sits on a large carpet designed by Gravelot and Tessier and woven by la Manufacture de la Savonnerie. 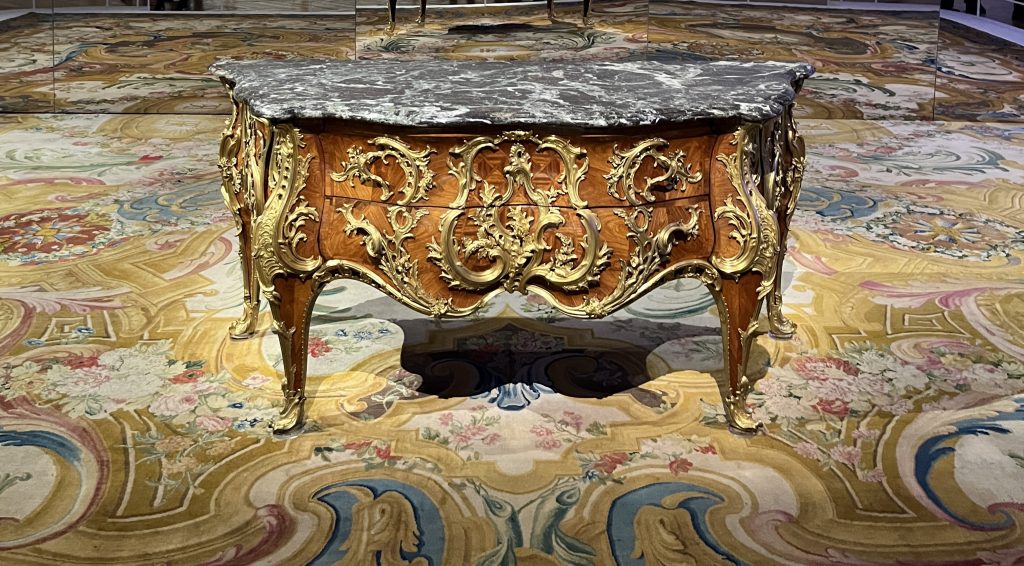 When you first enter the exhibition you bump into the extraordinary astronomical clock created over 35 years by the engineer Claude Siméon Passemant. It stands in a round decor and shows a very rare mechanism which connects the infinitely big solar system to the infinitely small seconds. It only needs winding every six weeks and it rings every hour and quarter hour, thus ringing 864 times a day. The celestial mechanism has a very rare gear disengaging system that means it can be controlled by hand without losing its initial point. The entire solar system can be accelerated, making it possible to predict the movement of the planets as well as the eclipses, or conversely, go back in time. It includes a moving sphere, and a calendar slot as well as the temperature. It is still working thanks to the lavish restoration by Rolex. 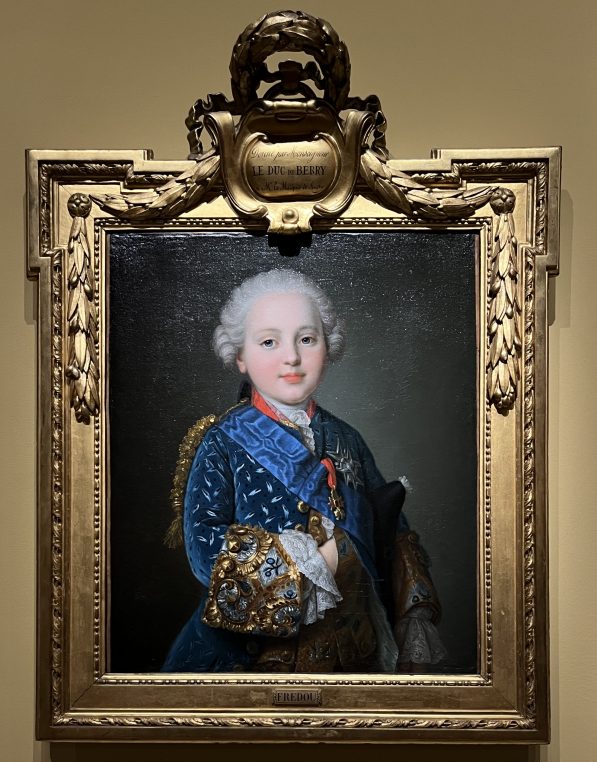 A charming marble bust of Louis XV at 5 by Antoine Coysevox reminds us of the sinister conditions under which he was born. He was the only child spared by the decimation of three generations of Louis XIV’ heirs in less than two years. He was saved from illness at 2 by his governess Madame de Ventadour and there is an excellent painting of her with Louis XIV, his son, grandson and Louis XV by Largillière. It was posthumous to his death and probably commissioned by her. She herself died at 90 being a great-great-grand mother… 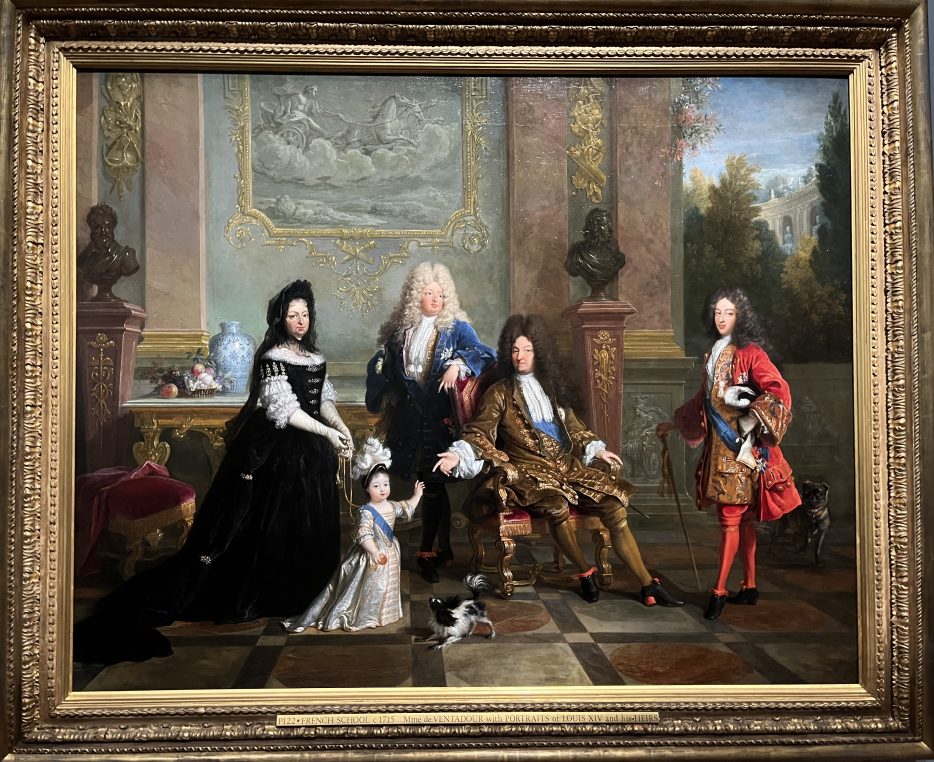 Another moving painting is of the king’s wet nurse, Madame Mercier, surrounded by her family by Jacques Dumont. The emotion around the young king’s survival is well captured there. Moments of his schooling are painted by anonymous painters and by Father Sébastien, and the day of his majority when he turns 13, is also consecrated by a painting by Nicolas Lancret in 1723. His coronation in Reims at 11 and paintings of his “wife to be” Marie Anne Victoire of Spain are riveting given the young age (4 years old) of the Princess. They are portrayed together by Jean François de Troy in a painting lent by the Galleria degli Uffizi in Florence. 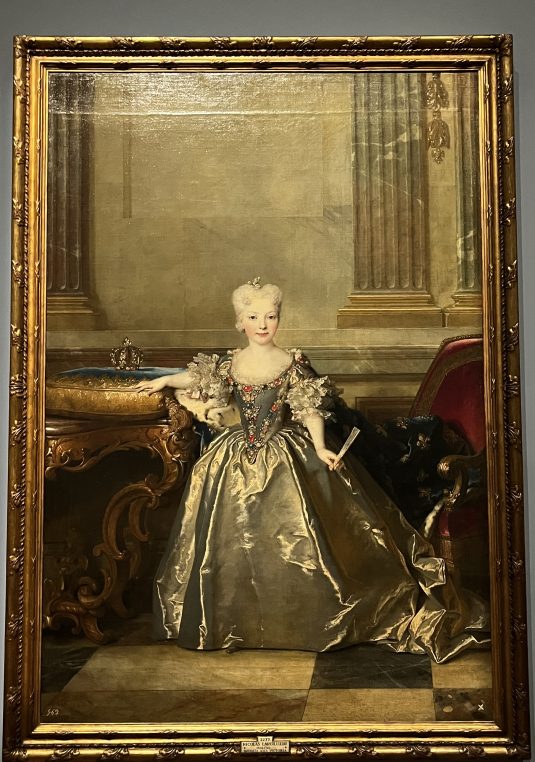 His coronation in Reims and the lighter crown especially made in glass for the ceremony, follow an amazing book with the list of unmarried princesses (under 22) in Europe listed in 1725. In a very conventional but clean hanging, we see a wall of relatives including a pretty portrait of Louis XVI at 6 and Charles X at 13. A pretty painting of “Declaration of love “in the park of Versailles by Jean François de Troy is lent by the Berlin Brandebourg castle, and a very naked Marie Ange de Mailly Nesle by Nattier is represented as the Goddess of Point du Jour. 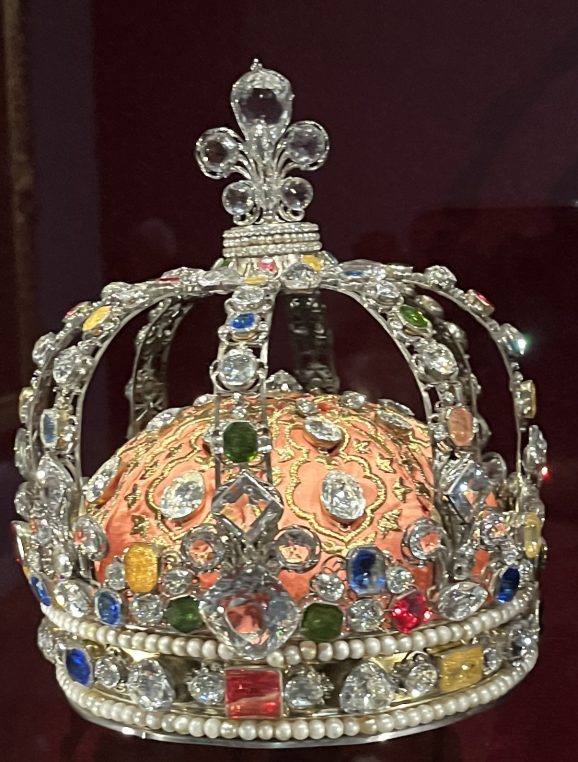 A room is devoted to the stabbing of the king with a knife by Robert François Damiens in 1757, another shows the agricultural discoveries of the time with a great pineapple painted by Jean Baptiste Oudry and the king’s passion for sciences is also developed. The corridor with the exotic hunts is the only staged part of the show with the rotunda created for the Spectacular Rocaille or Rococo art. Curves, polychromy and gilding are the rule with seashells and rocks. Meissen porcelain are also shown surrounding a chandelier commissioned by Madame de Pompadour. 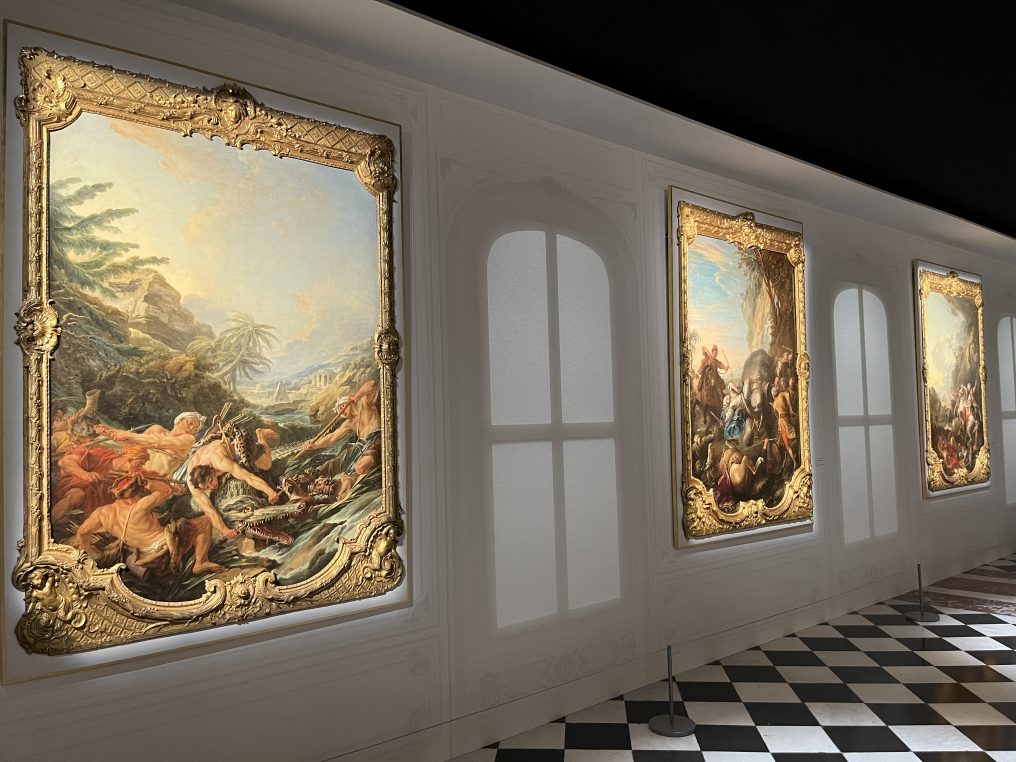 The gallery recreated with the Exotic hunts

The last room with the commode and the carpet from the Savonneries is doubled by a large mirror. A contemporary master of ceramics and bronze, Lignereux, is exhibited in the same room creating a blue altar to vases which contrast with the sumptuous secretary by Roger Vandercruse  RVLC, and Carlin’s commode with porcelain plates made for Madame du Barry and lent by the Louvre. Madame du Barry and Madame de Pompadour, the king’s favorites, both feature in the room with portraits by Drouais. 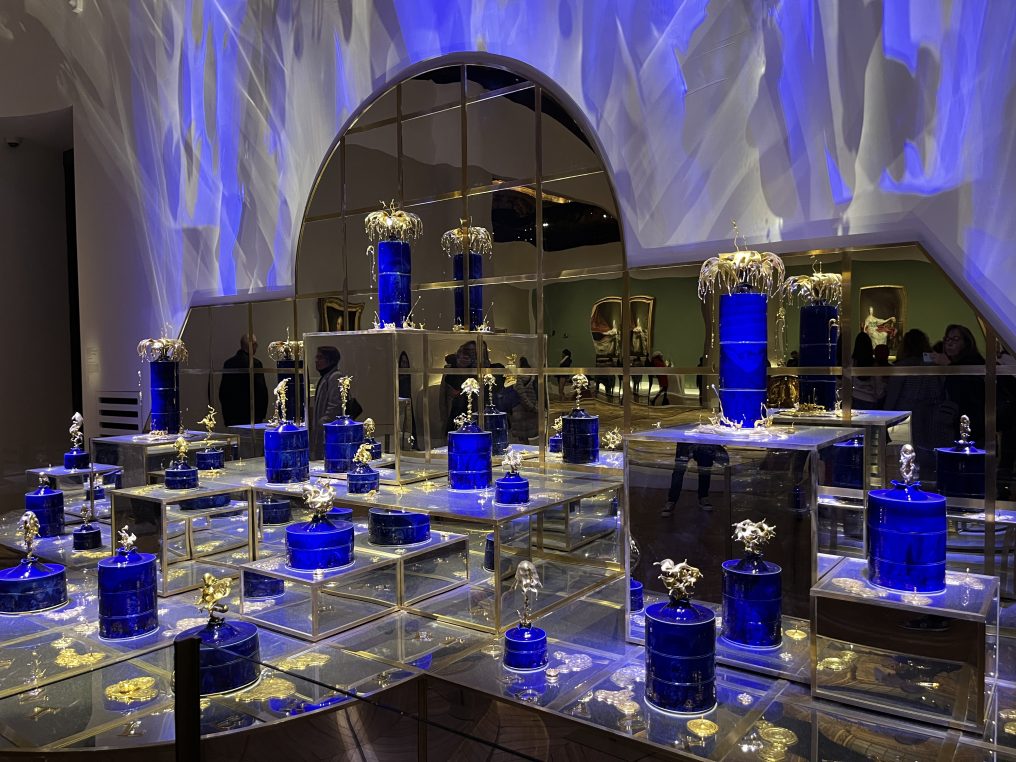 So this exhibition, which is presented in a less fancy way (by scenographer Martin Michel) than previous Versailles shows, (by Pier Luigi Pizzi for example), brings a lot of chefs d’oeuvre to the château. You can see it until February 19 but make sure to book your entrance to the castle and pick a week day. The crowds are back. 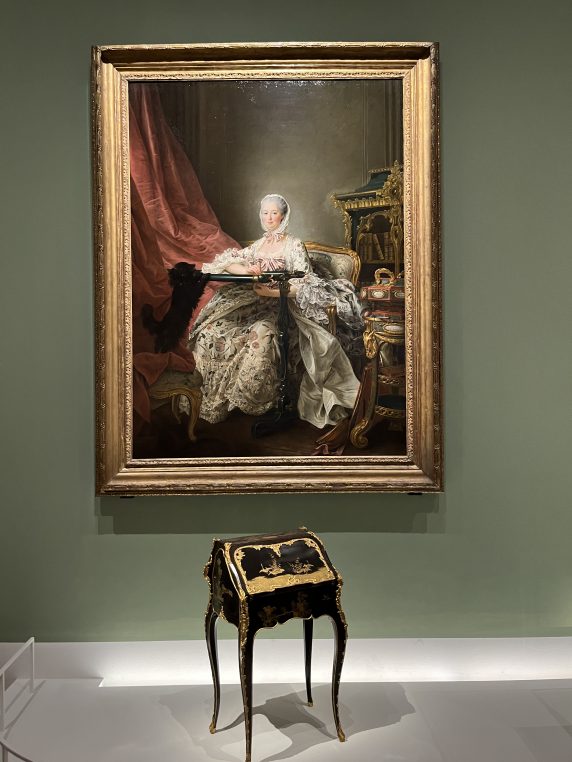 2 Comments on “In Versailles, Louis XV’s world is very conventional but superb”