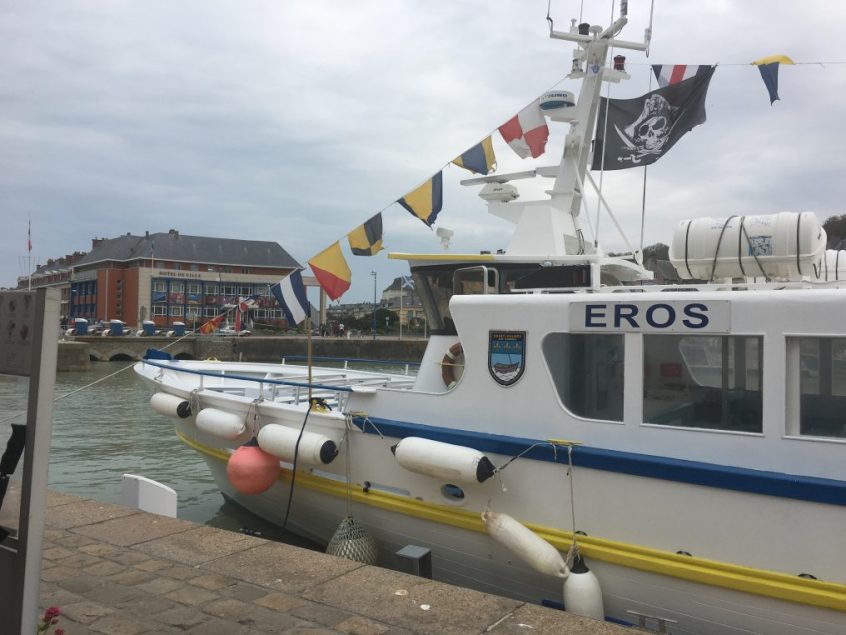 One of the last weddings before they were all cancelled, took place in a charming lost hamlet of Normandy, in the middle of blue linen fields and it gave me the opportunity to spend some time in Veules-les-Roses, a sea side village with the shortest fleuve in France. A fleuve is a river which ends in the sea. This particular one, the Veules, is only 1 149 m long and our hotel, La Douce France,  was built over it. How much more poetic can life be? This village happens to be also, since 1997, a large center for farming oysters, and I ate there the largest one ever. It has a pretty greenhouse, Les Serres du Val, with lots of species and watercress growing in the river. A true haven. 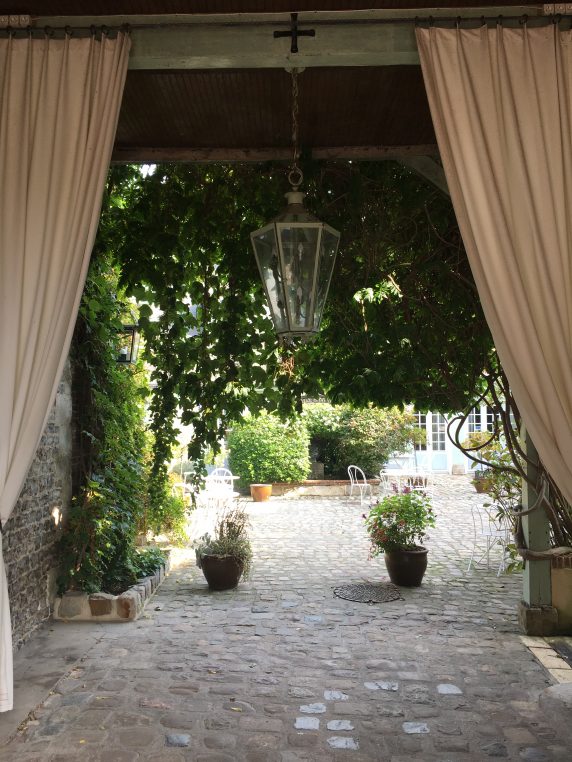 The week end started with an oyster tasting in the small harbor of Saint Valéry-en-Caux where I as lured by a great sailor who had once found there a shelter to spend the night while caught in a storm. A tourist boat was just landing from St Valéry sur Somme, up north, and it was called Eros, a good start for a wedding day… The weather was changing but it never rained and the young couple, both diplomats, who met while taking the entrance examination to the French Foreign office, are starting a new life in Brussels. A group of Mariachis sang and played during the small reception as a reminder of a Mexican moment of the bride’s childhood. 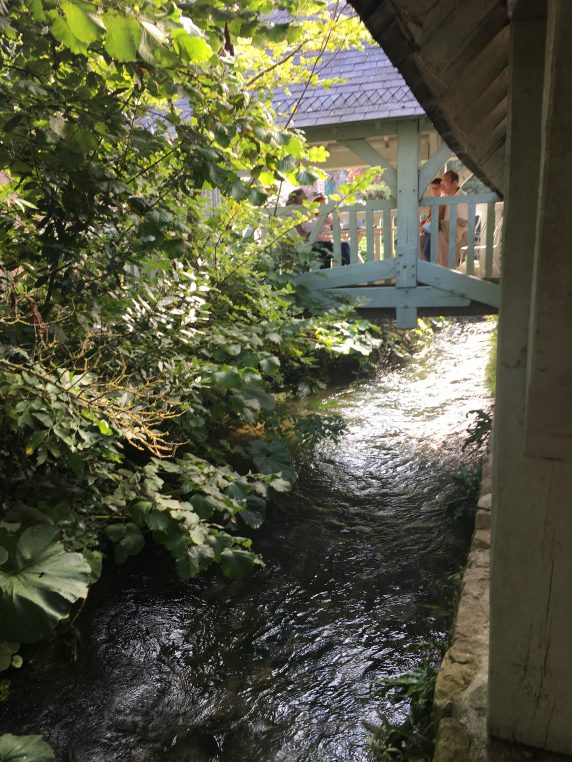 The Veules, shortest fleuve in France, runs under the hotel’s breakfast room

The area is full of delightful things to visit like Varengeville-sur-Mer and its famous chapel with stained glass windows designed by Georges Braque and its cemetery overlooking the sea. This is as close as you get to Cornwall in France. After buying a few plants at Les Serres du Val in Veules, I drove up to Etretat where the “Aiguille Creuse”, made famous by many painters but also by Arsène Lupin, was awaiting me by the golf course. We had a perfect day, playing in a tournament for the cause of breast cancer on one of the prettiest links in France. Everyone had pink masks! There are sea views on most of the holes and in good weather, the course is not too hard. But the real happy moment was to have dinner at La Marie Antoinette in Etretat, where the sea food is out of this world. Fresh soles and grey shrimps but also divinely cooked turbot competed with more oysters. 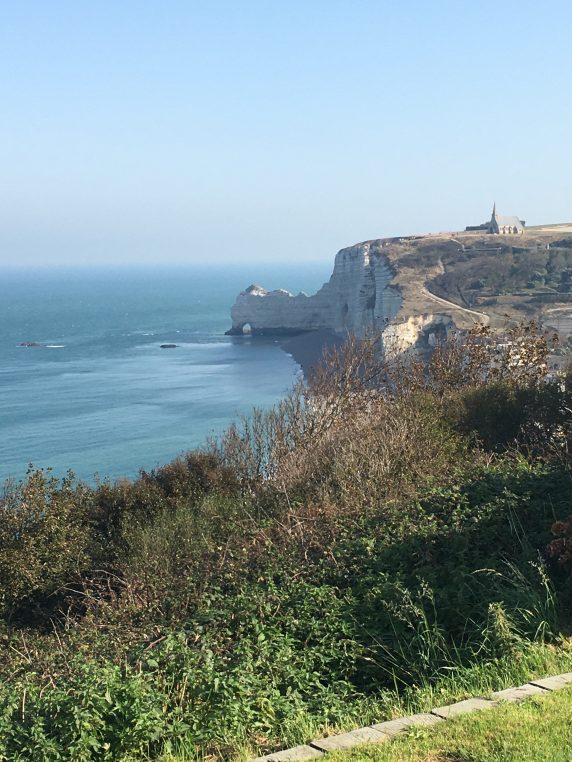 So there are still many wonderful places to discover around Normandy, two and half hours from Paris, with the most charming farming countryside, and the best food ever. I recommend this escapade to Veules, where the friendliness of the hosts is outstanding. 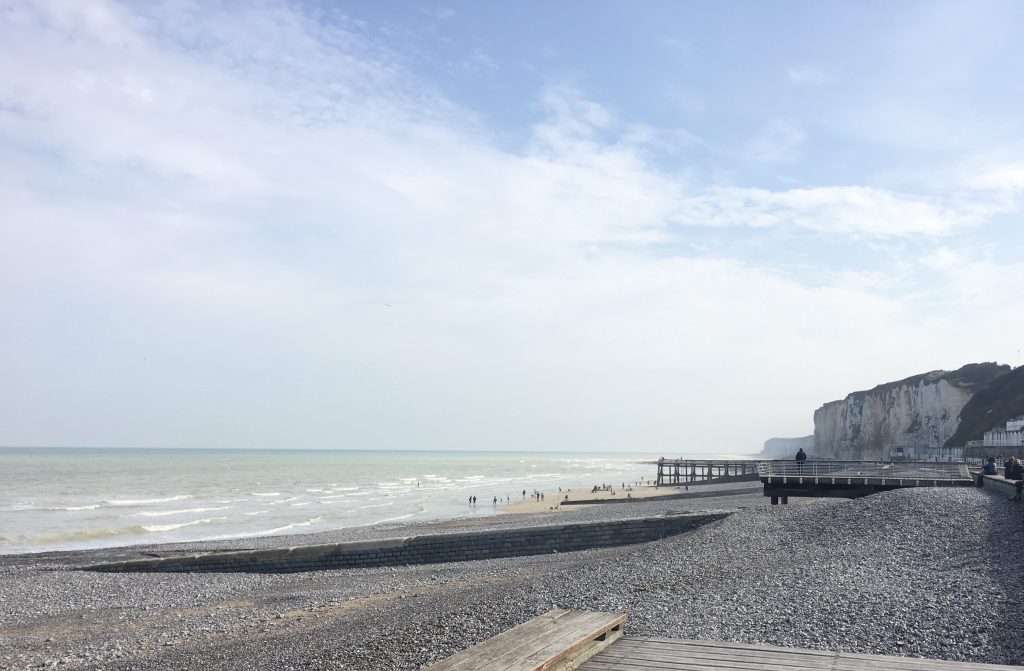 The beach in Veules -les-Roses hides a wonderful oyster farm

4 Comments on “In Veules-les-Roses, a wedding, a banquet of oysters, and the smallest fleuve in France.”