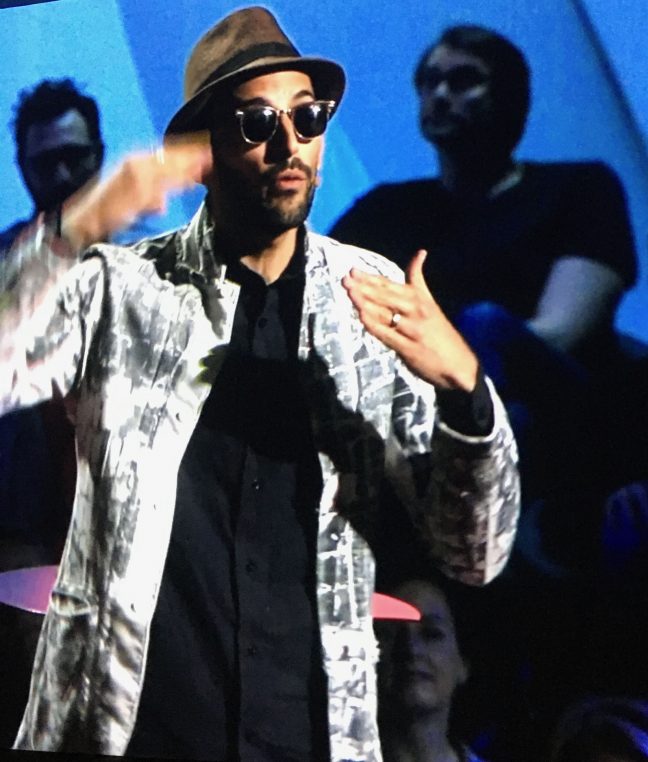 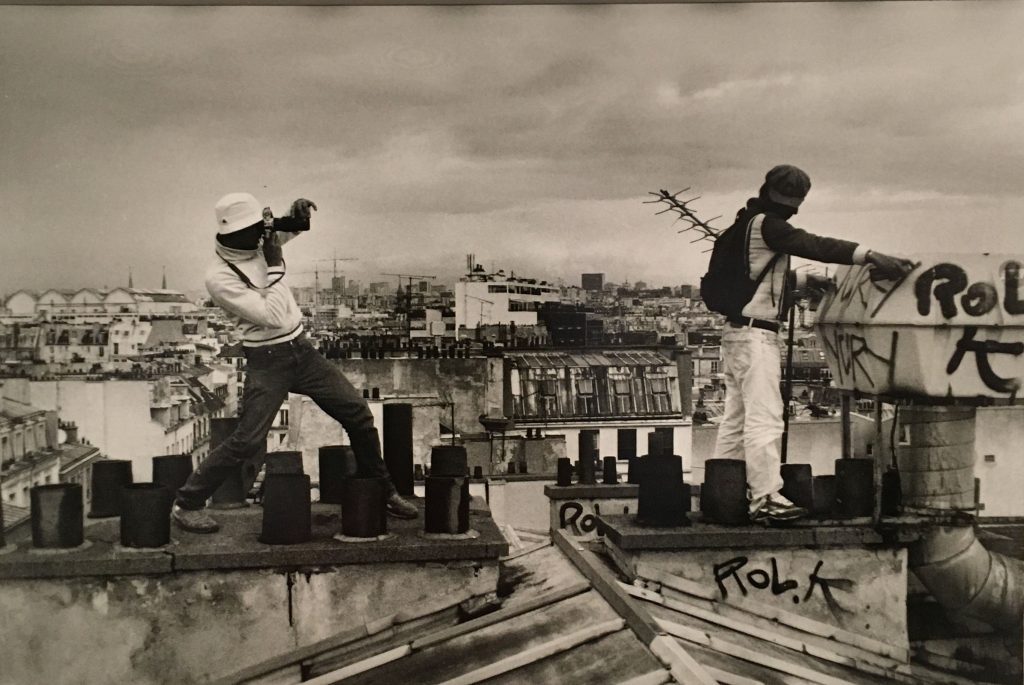 You might have heard of street artist J.R., a French born, Brooklyn resident, graffiti-photographer, who uses street art to make the world better. Agnès Varda shot a documentary “Faces Places“, around small French villages with him in 2017,  just before she died last March.  A large retrospective of his actions,” J.R Chronicles” is at the Brooklyn Museum until May 3. It is the most striking show I have been confronted to recently for it encompasses all major world dramas, including Israel and Palestine, favelas in Brazil, the Mexican wall and its illegal children, women in Liberia and Kenya… and suggests an artistic solution. 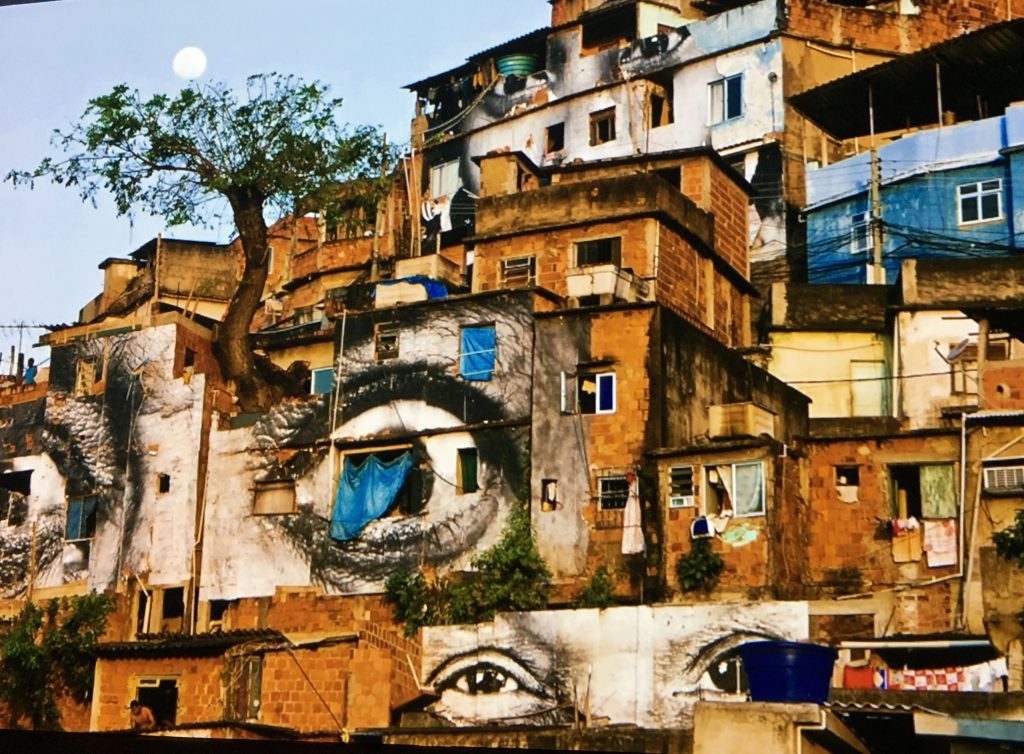 Born in 1983, J.R. was a street artist, writing his initials on walls of Paris when he was 15. One night he found a camera on the RER and started taking photographs of his friends painting graffitis. Soon he used the camera to create large photographs of people which he printed and pasted on houses, walls, buildings and bridges. He transformed ordinary poor people into heroes and gave them pride and power. This is particularly visible in Rio de Janeiro, where he photographed the mothers of gang victims and transformed their favela into an exhibition center which attracted the International press. He considers “the street as the largest art gallery in the world.” 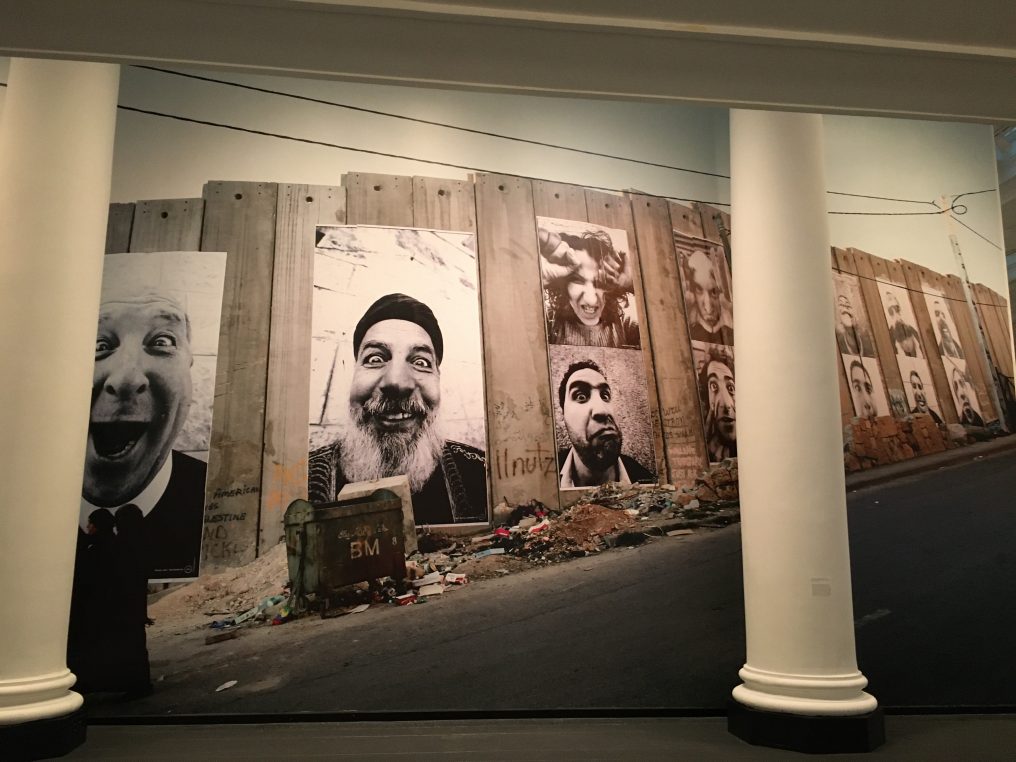 “Face 2 Face”, In Jerusalem, he put side by side on both sides of the Separation Wall, an Israeli actor, barber, grocer, professor, security guard, and his Palestinian counterpart

In Jerusalem, he went to see Palestinian and Israeli professionals on both sides of the Separation Wall and asked them if they agreed on having their photograph printed next to each other. The response was enthusiastic. In Cuba, he pasted pictures of old wrinkled people who told him about Castro’s rise to power in 1959, on buildings that would eventually be torn down like he had done in Montfermeil in the Paris suburbs at the beginning of his life. In Kenya, he put the eyes of a woman on a train that crosses the whole country in the series “Women are heroes” which is also a film. He repeated this on a cargo ship which he eventually ran into in Lampedusa, where he was photographing African immigrants. 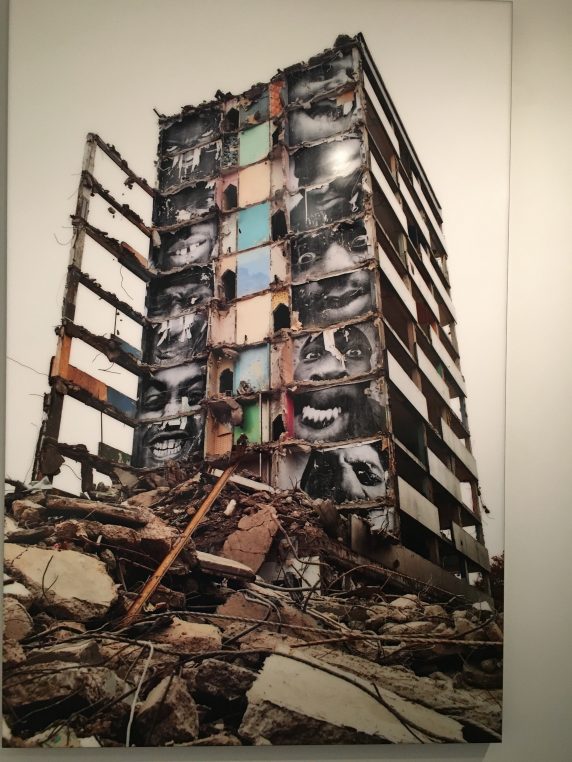 “Portrait of a generation” Destruction 2, in Montfermeil, near Paris, 2003

Before the towers of Les Bosquets near Paris, were destroyed, J.R. and his team of 25 volunteers pasted portraits of the former inhabitants at night inside and outside the projects. They were arrested by the police. The next day, the cranes “ate” the portraits and the destruction became a work of art. 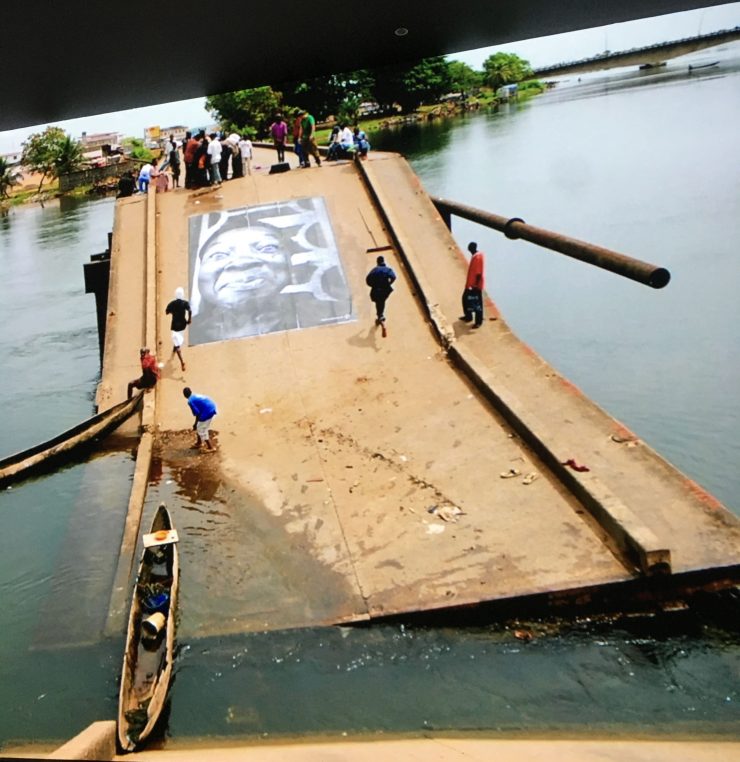 In Monrovia Liberia, the photo is pasted on a bridge used daily by rebels who kill each other

One of the most extraordinary room is the atrium of the museum, where very large photomontages of San Francisco and New York city portray the colorful population. The visitor can use iPads to tap on a face, and the character tells his or her story in one minute. It is fascinating. Another interactive part of the show is where the visitor can communicate through an iPad again, with children in a favela in Brazil. I happened to be there when a Portuguese speaking lady talked to them! They were so excited to be directly connected to a museum in NY! 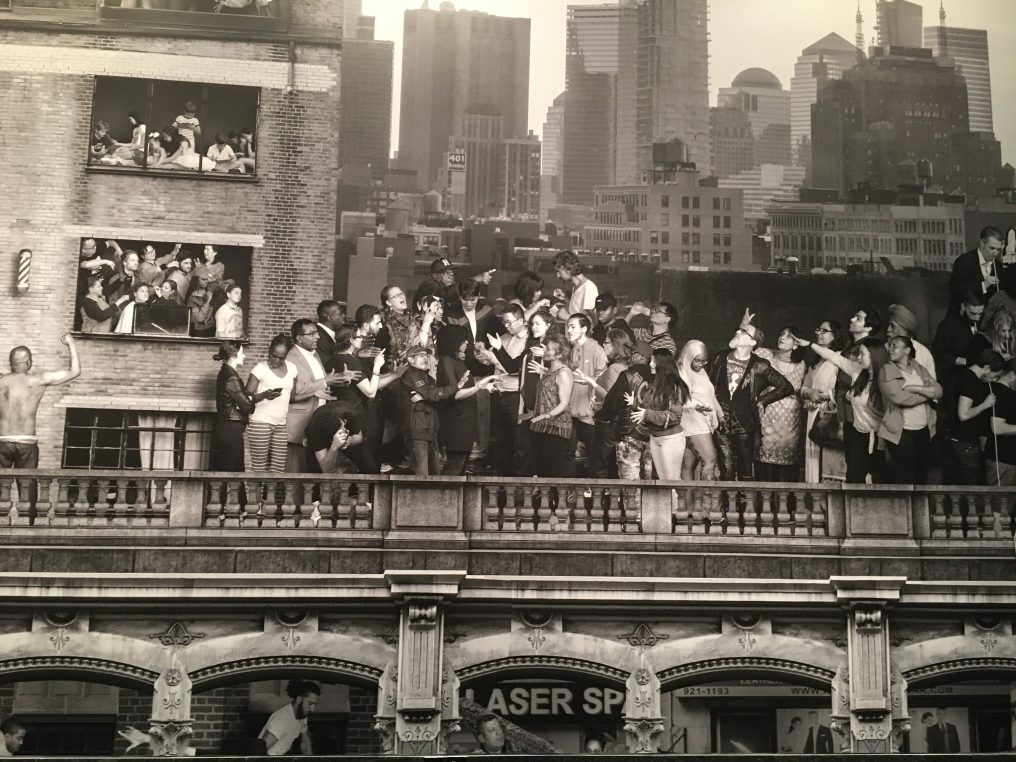 “Chronicles” large collage of Americans, was inspired by Diego Rivera. With an iPad, you can click on a face and get their story

Many more pictures taken at the Louvre in Paris this spring, or on the roof of the Paris opera with ballet dancers, do not feature in the show. But you can buy the book published by Phaidon, updated in 2019,  “Can art change the world?” which is very complete. At the beginning a biographical comic strip by Joseph Remnant,  explains J.R.’s career in 15 pages. 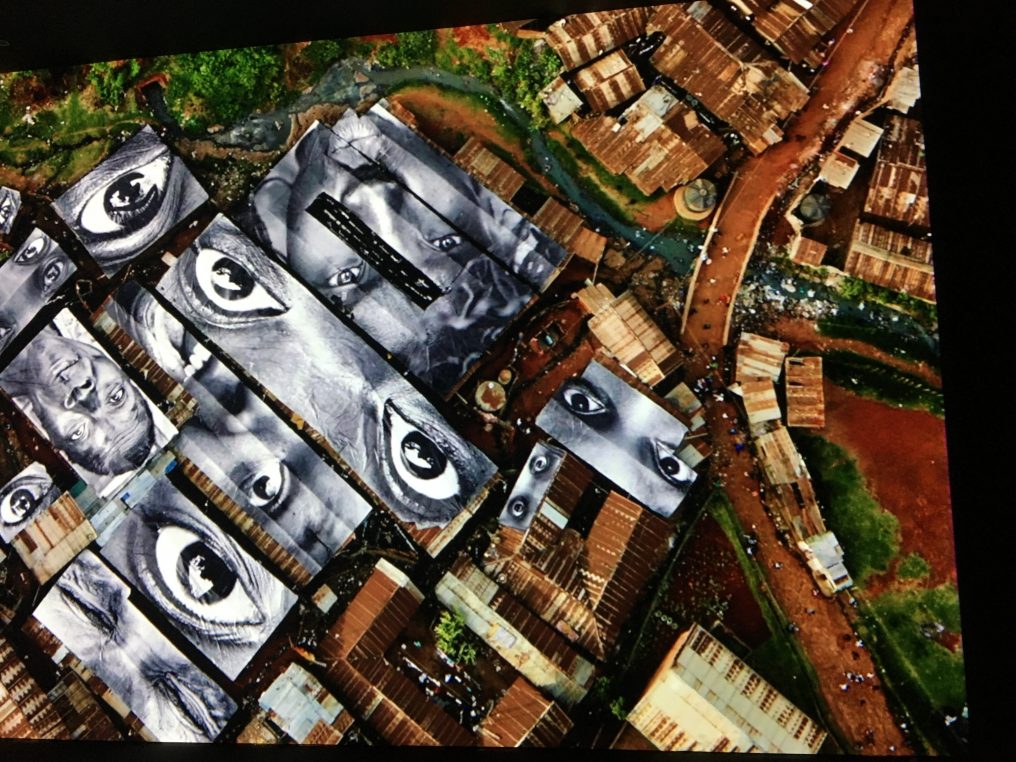 In Kenya, photographs were printed on vinyl so as to protect the roofs from the rain. One inhabitant moved and cut out the picture over his house.

What I loved above all in this show, is that with a large printer and paper, J.R. can make people communicate. He gives hope to starving ladies in Cambodia, children in the prospects, Kurds, Jews and Armenians in Turkey. He finances his projects with the sale of his photographs (the same way Christo finances his wrappings) and also does large government subsidized events in France like at the Pantheon, the National Assembly and the Louvre, where he created short term happenings. 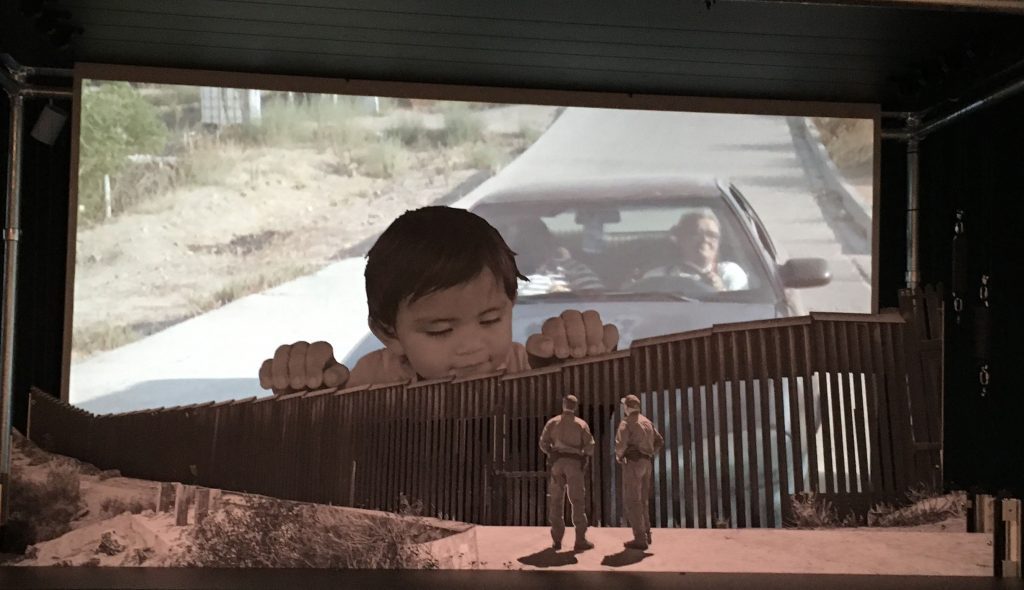 The are numerous videos to watch including J.R.’s own presentation of his work at a large conference when he received the TED prize for photography. The photographer,  who dates French artist Prune Nourry is also very concerned with feminism around the world. 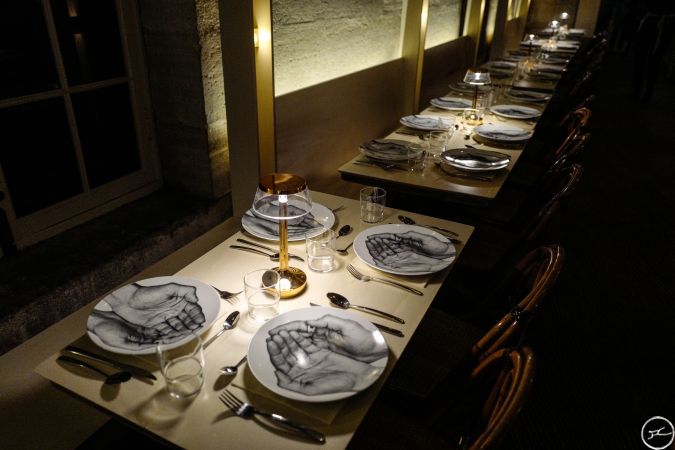 Plates J.R. designed for the Refettorio, the social restaurant located under the church of the Madeleine

Brooklyn Museum in New York until May 3. Close Mondays and Tuesdays.

One Comment on “J.R. in Brooklyn, a magical adventure!”