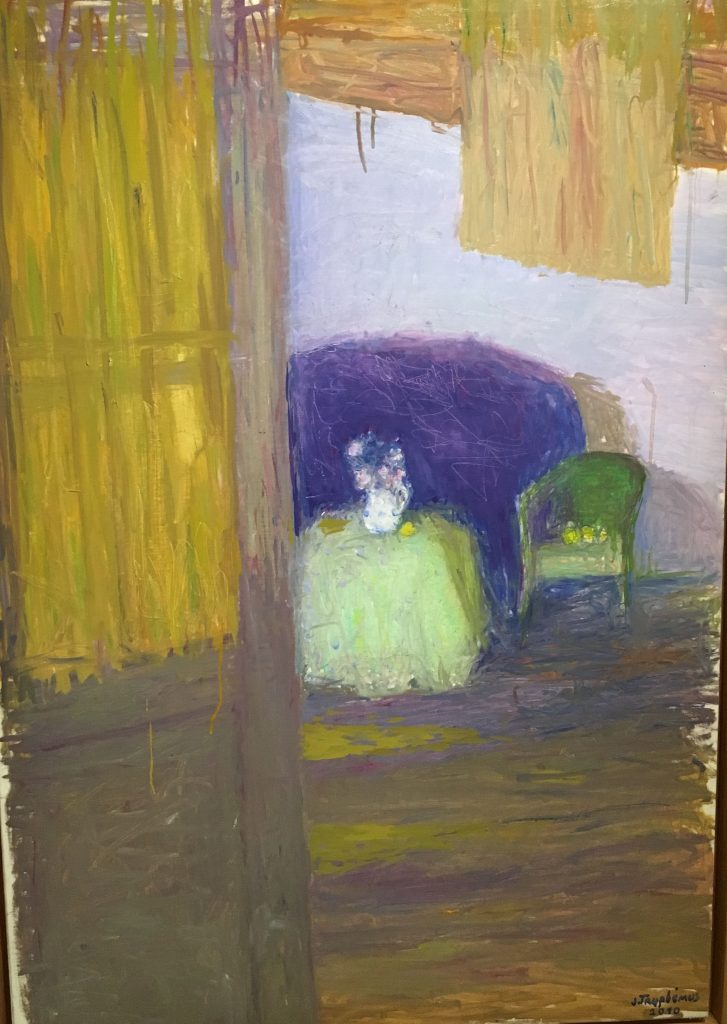 It was an extroardinary privilege to walk around the exhibition « Intimacy revealed » with the painter himself, Jacques Truphémus, 94, who still paints every day and enjoyed every minute of the opening at Propriété Caillebotte in Yerres. He kept on telling the curator, Nicolas Sainte Fare Garnot that he was so touched, he felt he was looking at someone else’s paintings. His emotion was visible. He specially liked the lighting and the way each painting was hung. Also the different themes from « Silent lives » to «  Beyond Cévennes » and « Scenes from Lyon ». 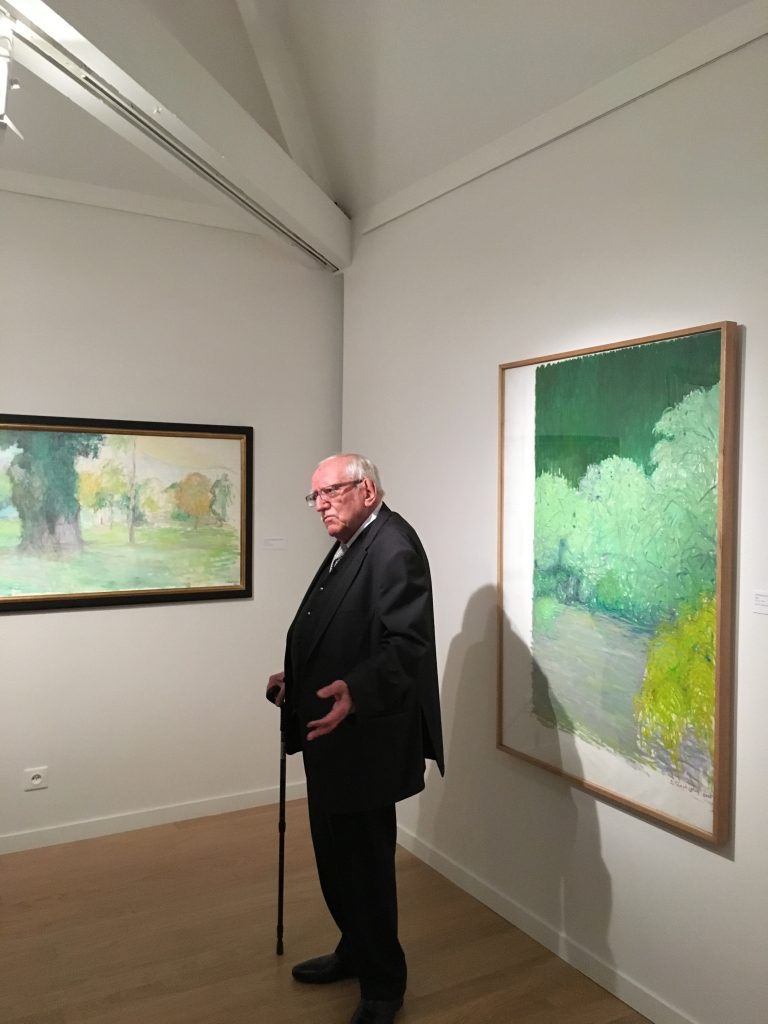 Truphémus started painting at 15 in 1937 and has never stopped except during the war when he was sent to obligatory work and when he caught TB. His hometown is Grenoble where he is often exhibited but he lives in Lyon . He always spent his summers in the hills of Cévennes, in the thermal town of Cauvalat, where his dear wife Aimée Laurens owned a house. There, the light is very different and he said how difficult it was for him to adapt every year. 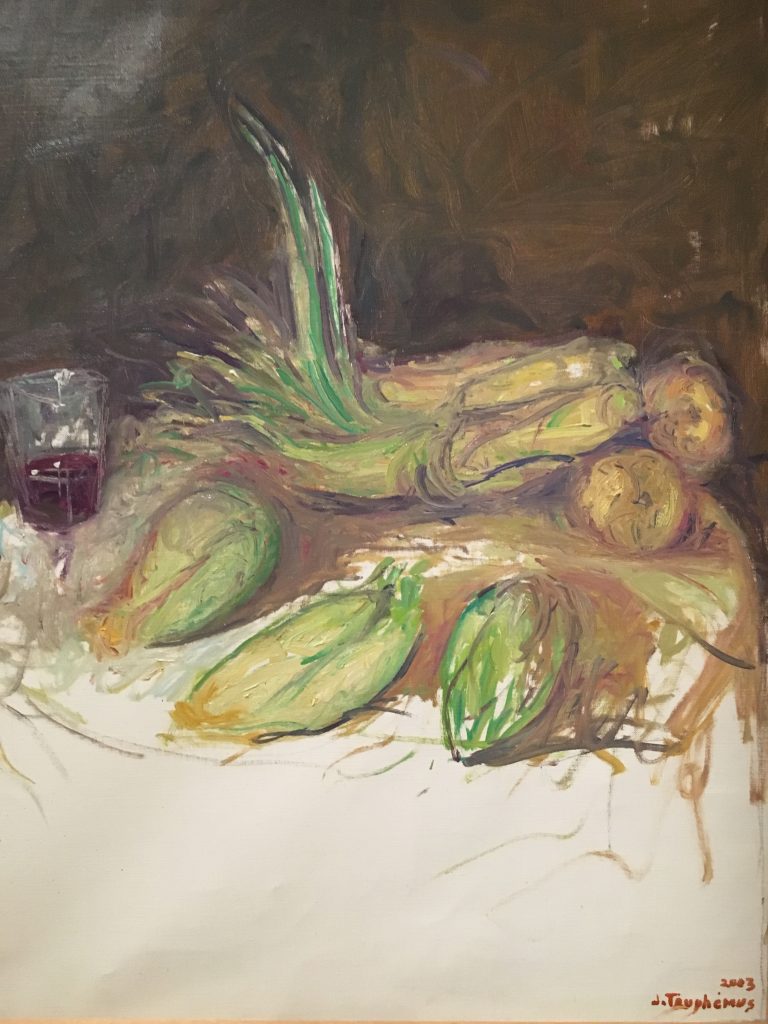 « Painting is not an art for men in a hurry », he said and you can feel the time spent on each canvas. They were married for fifty years until her death in 2000 and the last room in the show is devoted to her portraits. 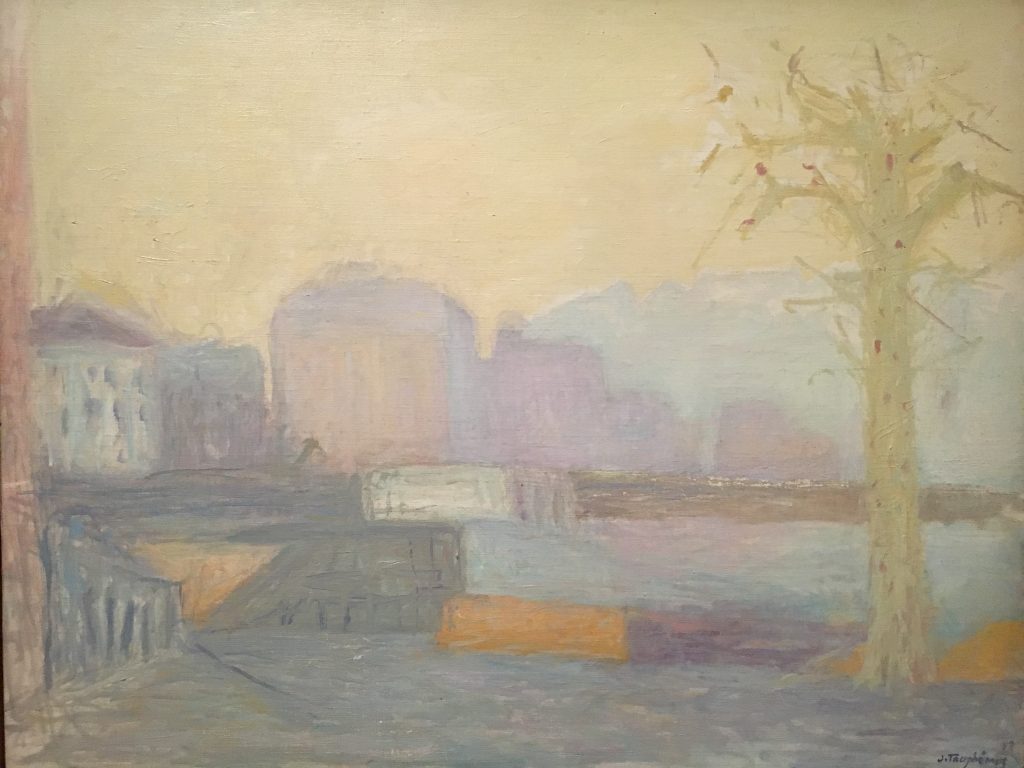 Simplicity, silence, melancholia are the essence of his painting and all his friends and collectors agree in the quality and depth of his art. I first ran into his work at galerie Claude Bernard in Paris who has been showing him since 1990. Among the seventy pieces exhibited here many come from the gallery and from private collections. 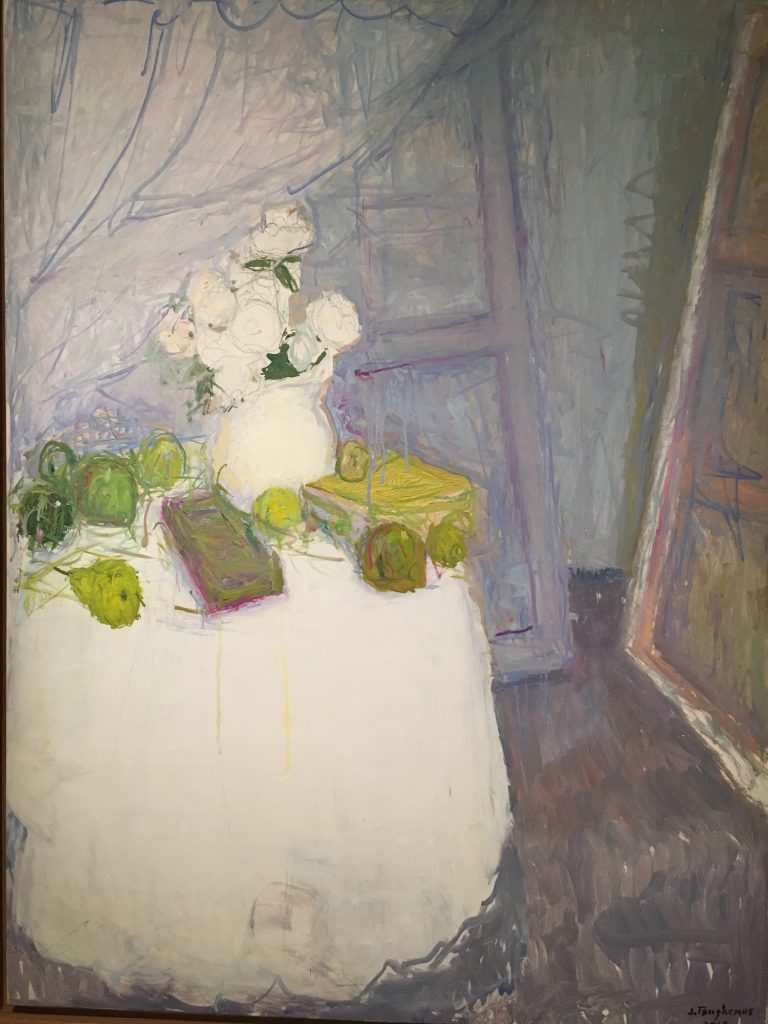 Truphémus has travelled extensively to Holland an to the North of France searching for different lights and he also went on a trip to Japan in 1970, bringing back many drawings from Kyoto, Tokyo and Osaka which can be seen here. 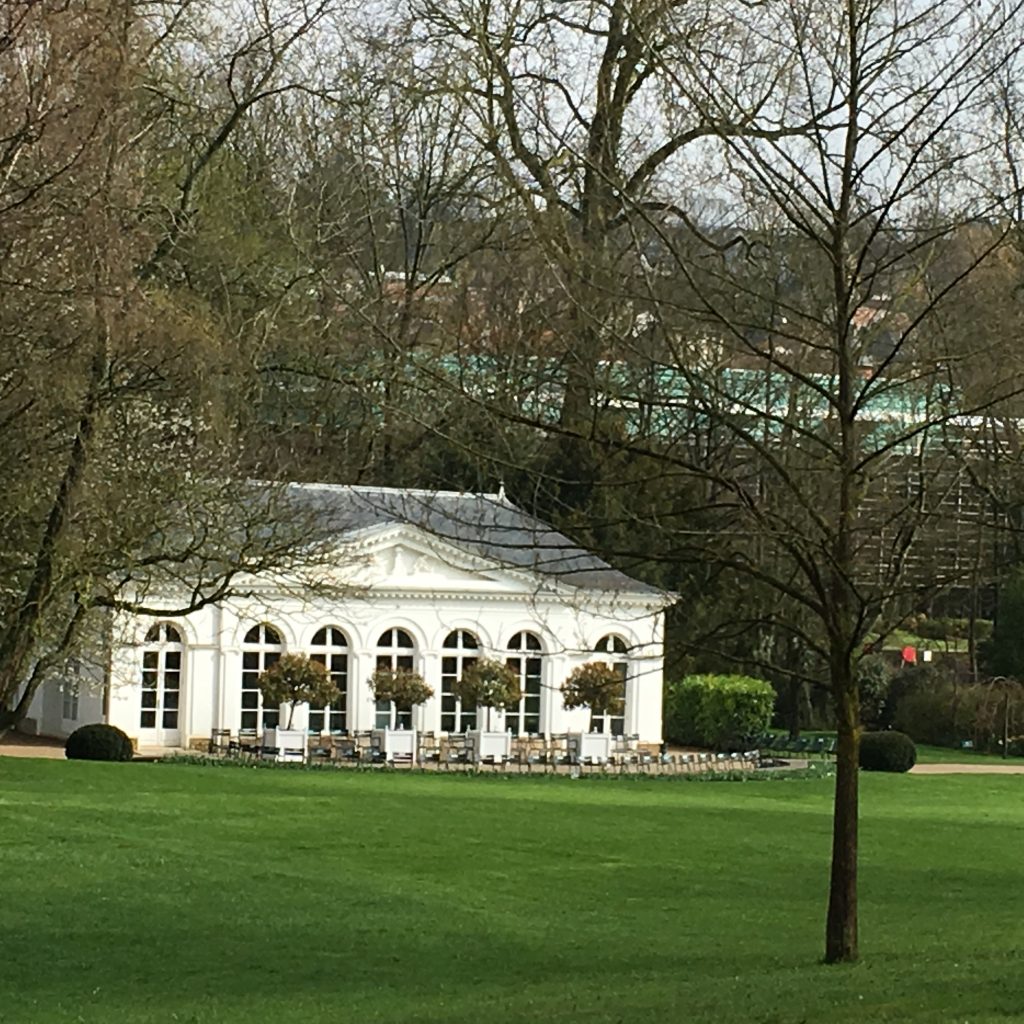 The weather was rainy just like in Caillebotte’s paintings of umbrellas in Paris and Truphémus’s works were bringing in a welcome light. The poetry and charm that come from him and from his art are overwhelming. And matched so well the 22 acre park of Caillebotte’s house, which was built in 1824 in neo classical style by Pierre Frédéric Borrel, owner of the restaurant “Le Rocher de Cancale” and one of Balzac’s heroes. It has a marvelous atmosphere and elegance. It was bought in 1860 by Caillebotte’s father. 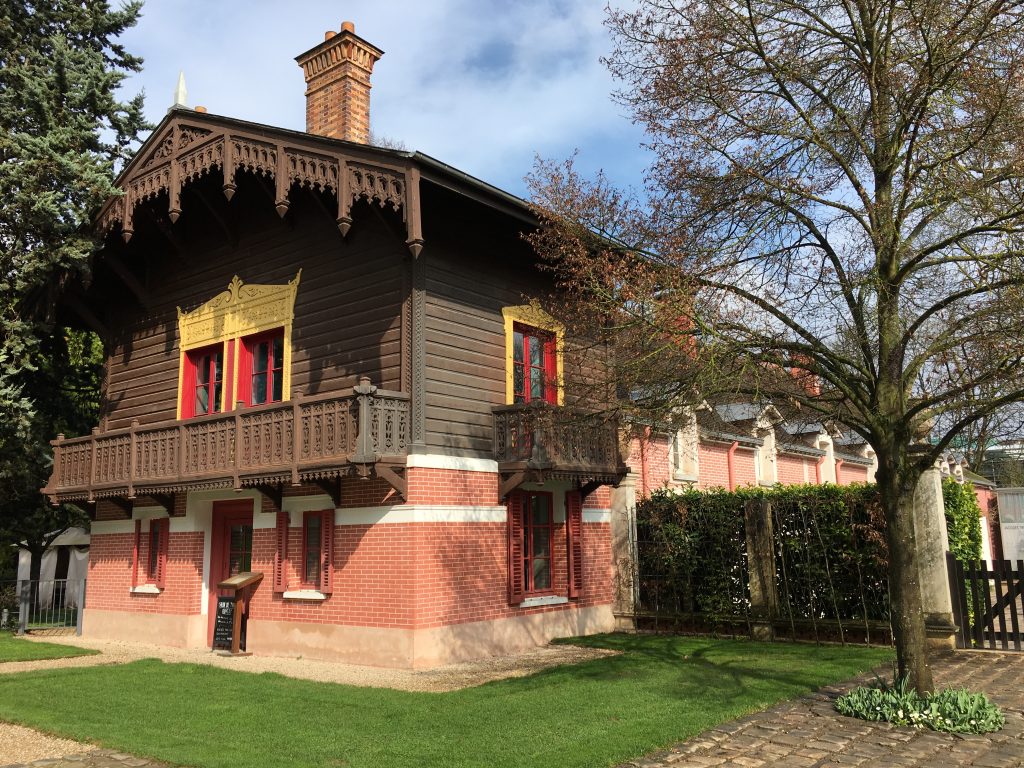 The Swiss chalet in the park is now a restaurant

The city of Yerres, which counts 28 000 inhabitants and whose mayor for twenty years is the presidential candidate, Nicolas Dupont Aignan, is finalizing the restoration of the house which will be furnished and reopened next June. It is now listed as a « Destination Impressioniste » like Giverny or Auvers sur Oise and the park is « Arbres remarquables » with wonderful Lebanese cedar trees. The bedroom furniture was luckily bought back at auction last September from Robert de Balkany’s estate ! Every year, some of Caillebotte’s paintings are lent by his heirs so that regular visitors always discover something new. 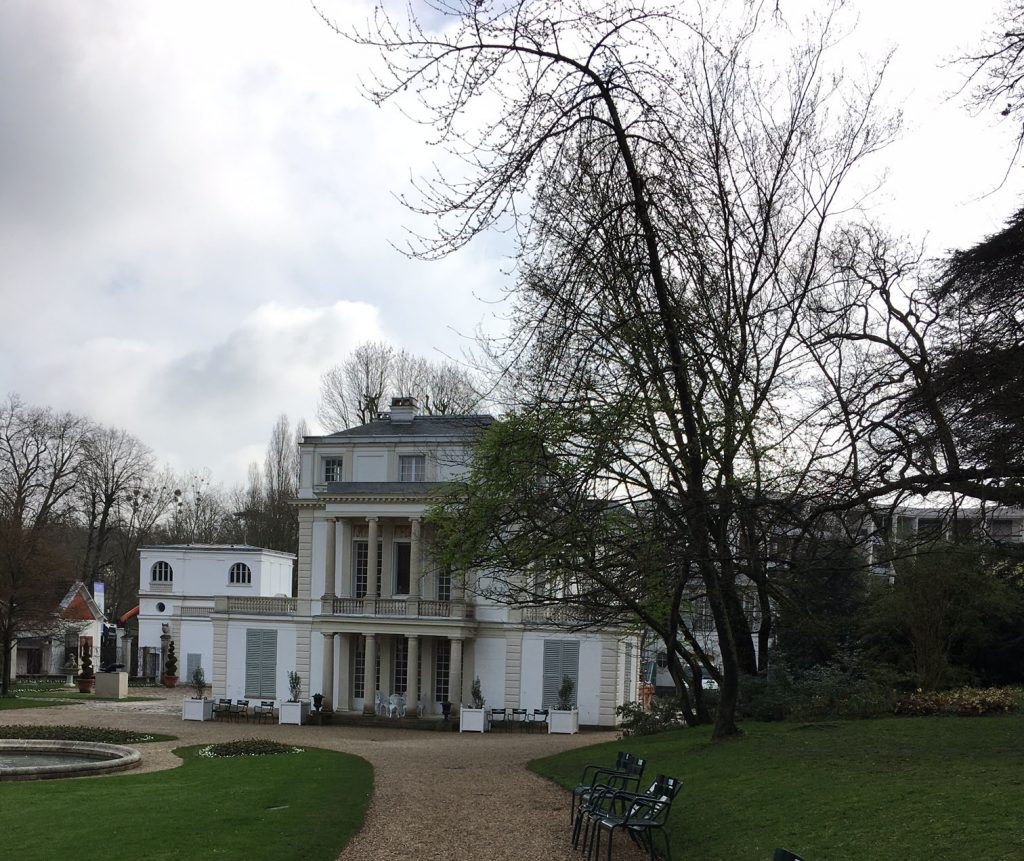 There is a river in the park and one can go boating starting on May 14 th. Many of Caillebotte’s paintings were inspired by the property and the vegetable garden, surrounded by walls, which can be visited.

It is an hour ride South East of Paris, on the way to Troyes, and it makes for a charming day in Impressionist country. (Truphémus until July 9)