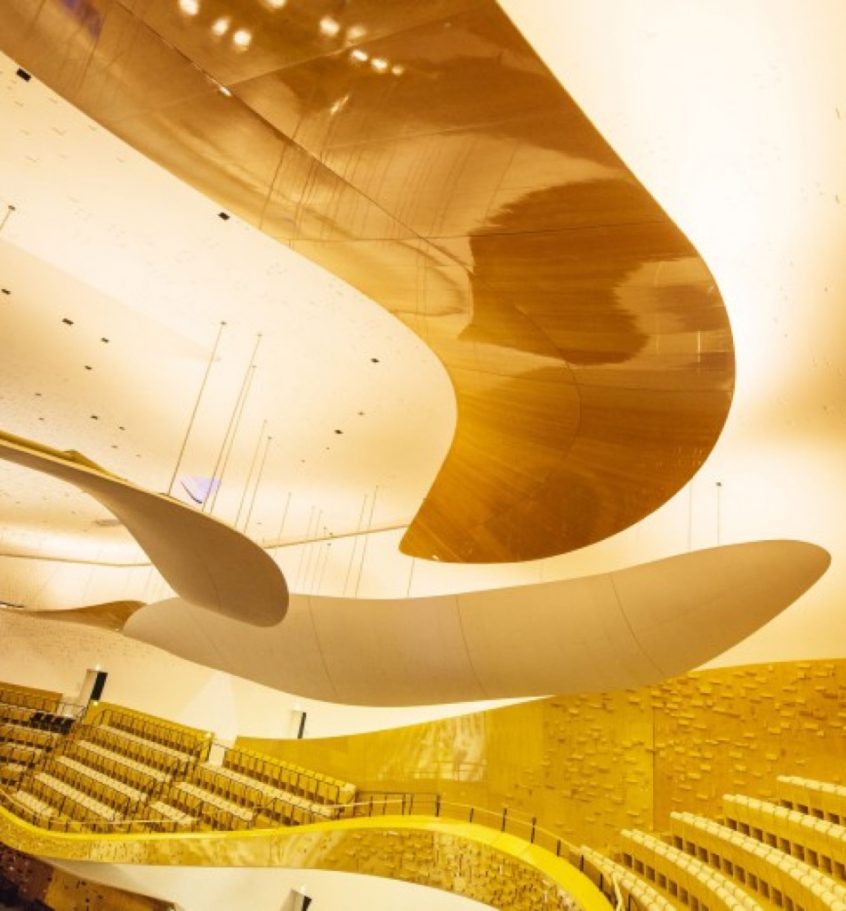 I was looking forward to this evening at the new Philharmonie de Paris for a long time. Theatre and opera director, Côme de Bellescize, 34, whom I have been following for four years now, was directing Arthur Honegger’s « Jeanne au Bûcher » which he created for Seiji Ozawa in Japan in 2013. The libretto written by Paul Claudel is an ode to the 19 year old martyr, burnt by the English in May 1431, in Rouen.

But we had to suffer  beforehand the before enjoying the opera. First, the building is in total disarray, unfinished, with scaffolding all around and holes in the silver tiled roof. It would almost be comical if it hadn’t cost the French taxpayers €381 millions (instead of the estimated 170).

We had decided, my young Peruvian baritone friend and I, to have a drink first at the Café des Concerts next door. When we arrived, it was fully booked and an atmosphere of chaos reigned on this place which used to be the chicest hang out, designed by Elizabeth de Portzamparc… Now it looks like the canteen of a big company. At the bar, the sweet waiter was going mad with everyone begging for a piece of cheese or saucisson to nimble on. The handsome and mysterious President of the Philharmonie, Laurent Bayle, was quietly waiting alone in a corner to be served. 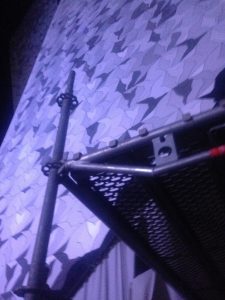 Construction is still going on!

At 8.15 pm we slowly proceeded to the large hall, crossing our path with the « young » who were going to the David Bowie/Philippe Decouflé show at the smaller hall. The atmosphere started to get fun.

Then we climbed the stairs to the concert hall in the dark, with tractors smiling at us. We found our way through the freshly painted corridors (you could still smell the new carpets and the paint) and entered the auditorium. I will not give you the name of the famous French architect because he is threatening to sue anyone who mentions him, since the project is not finished and already in activity. (It was officially inaugurated by François Hollande on 14th January just after the terrorists’ attacks).

And then we got more excited. The place is huge with strange sculptures hanging from the ceiling (for acoustics reasons) and painted in 1970’s colors, yellow, brown and black. A stage was built in grey wood around the musicians, forming a gangway where Oscar winner Marion Cotillard and Christian Gonon, would soon evolve. In the back, two huge sets of vertical benches (like the ones you see for the public at golf events) were holding the choir of a hundred. Another ninety members of the Orchestre de Paris slowly filled up the orchestra pit.
« Il y a une fille appelée Jeanne » (there is a young girl called Jeanne) started resonating all around, while Jeanne/Marion Cotillard slowly walked to her death at the central pilori, in an off white simple dress. Frère Dominique, beautifully dressed in a navy blue cape, comes in a dream to comfort her. Very soon, the microphoned voices of the actors (recitants) become irritating and take away the emotion.

But the power of the choirs and the soloists Simone Osborne and Anne-Catherine Gillet take over. During the jazzy moment of the trial with Porcus, (Thomas Blondelle sings the part of Bishop Pierre Cauchon) the main judge dressed in pink, a group of 40 muttons with red ribbons, snake, tiger, and fox start dancing with the music. The choir also moves in rhythm, as do the children dressed in multicolor shorts and bérets. There is a magical moment, when the whole stage is in movement. White chorists and colorful animals mix in a popular feast ! 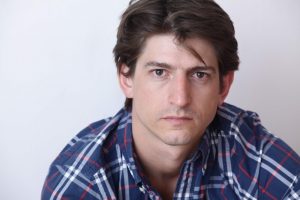 Three kings with medals and huge caps, wearing riding pants come in. Christian Gonon, the narrator (from the Comédie Française) is excellent, directing everyone with the maestria of the Monsieur Loyal of a circus. The crowning of a 5 year old King Charles VII in Reims is a moment of emotion. « Jeanne, tu n’es pas seule » is another.

The opera finishes (retroactively) on Jeanne hearing the voices of the Virgin Mary (dressed in a fabulous blue veil which looks like a fancy parachute) in Domremy, the village of Lorraine where she was raised. And Côme de Bellescize comes out and bows to the audience between Jeanne and the Virgin in front of  a very proud Blanche d’Harcourt, the French pianist, who produced the whole show with Seiji Ozawa and the daughters of his long time producer Albert Sarfati …The vision is pleasing. 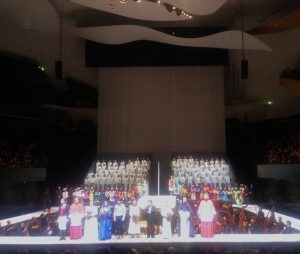 The colorful cast and choir being applauded

Kazuki Yamada who works mostly in Switzerland and Monte Carlo this year, will conduct the production in New York from June 10 th to 13 th at Avery Fisher Hall. Don’t miss it.

2 Comments on “Joan of Arc as “Jeanne au bûcher””