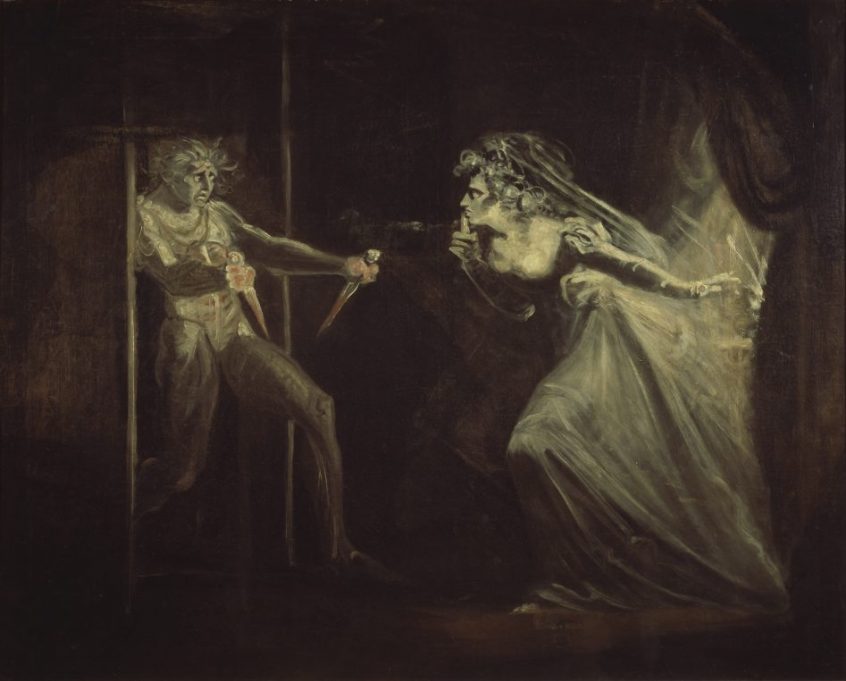 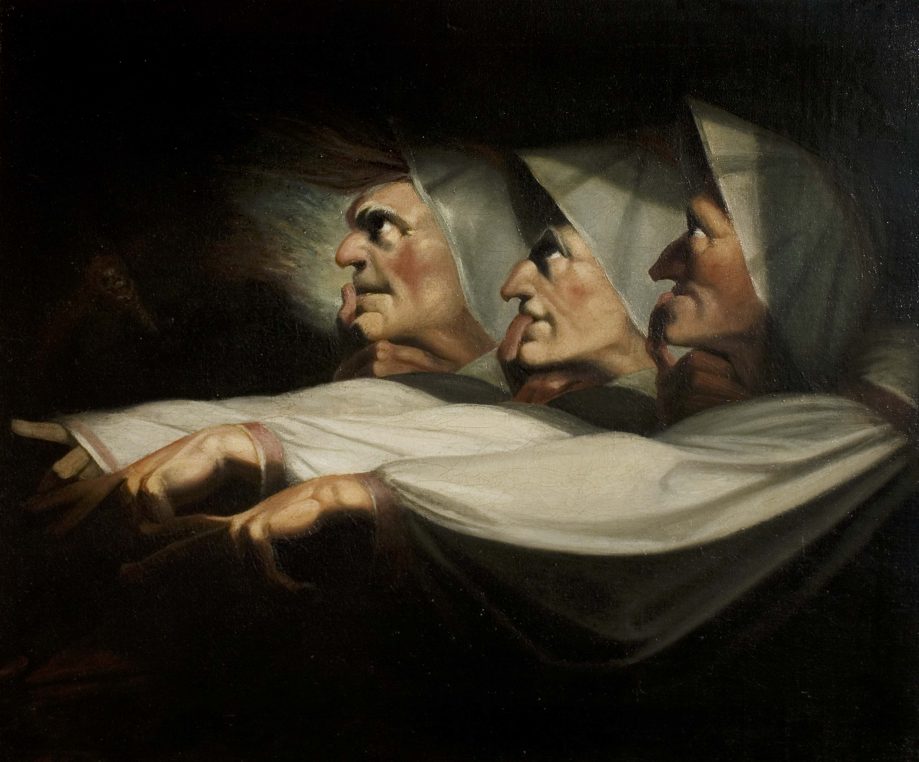 “The three witches”, after 1783, The Royal Shakespeare Company Collection, Stratford-upon-Avon

Shows are not always perfect at Musée Jacquemart André but this time, the “Realm of Dreams and the Fantastic” with Swiss painter Füssli is perfect for the size of the rooms and visiting the show with the witty and very knowledgeable Christopher Baker, director of European and Scottish art at the National Gallery of Scotland, was a real treat. He made sure we understood how innovative the painter’s dreams were and how his strangeness was perverse for his times. Also how he influenced twentieth century artists such as Max Ernst or more recently Eric Rohmer in his film “La Marquise d’O”, which takes after his Incubus in “the Nightmare”. He trained to be a priest and therefore had an in depth knowledge of the Bible. He also contemplated becoming a writer and Shakespeare and John Milton and German poet Christoph Martin Wieland, inspired his paintings and drawings. 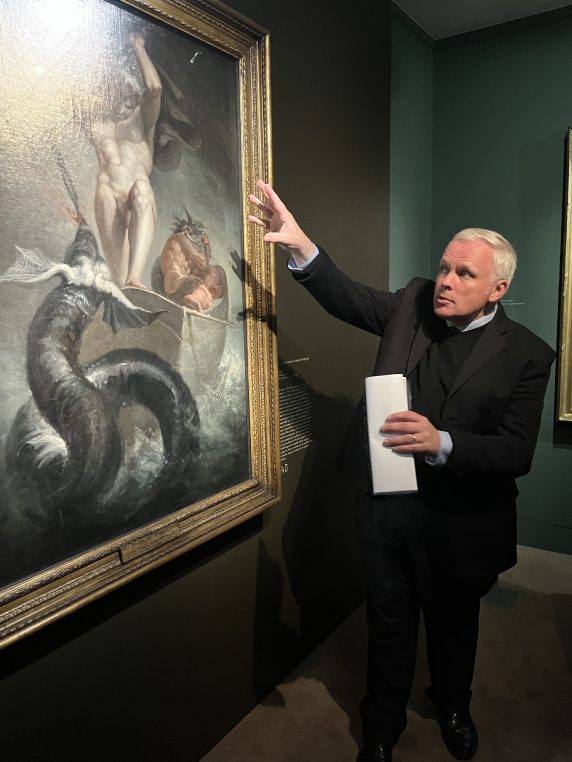 Füssli was born in Switzerland in 1741, but became a Londoner by adoption and died in Putney at 84. Many of his drawings are kept in Basel and in Zürich’s museums, while his paintings come mostly from Great Britain and the US. In the first room, there are diverse portraits of the artist by George Henry Harlow, James Northcote and a self portrait. And the fabulous “Dido’s death” painted in 1781  which came from the Yale Center for British Art. Inspired by the Aeneid it shows Dido who was madly in love with Eneas, dying. Her soul emprisoned in her hair is delivered. This major painting was exhibited in 1781 at the National Gallery with Sir Joshua Reynolds‘ own version of Dido’s death and this event would bring fame to Füssli. As Christopher Baker pointed out it is a great example of his obsession with women’s hair which shows throughout the exhibition. 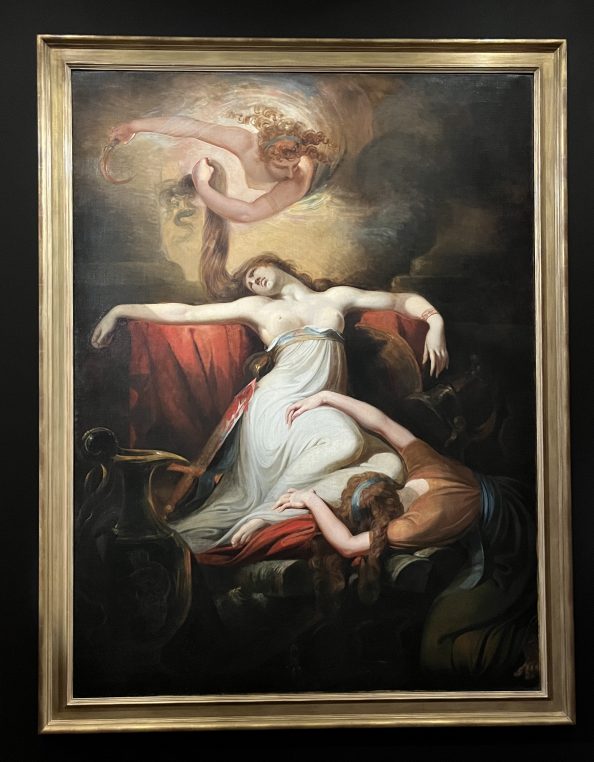 Then the theme of Lady Macbeth occupies a room with a painting from the Louvre, where she is a somnambulist, her face lit by a candle. Füssli had translated Shakespeare’s play in German (it was never published) and he painted different scenes as well as the actors David Garrick and Hannah Pritchard in their respective parts in 1766-1768. A room with Nordic paintings and images from Oberon by John Milton increases the fantasy and epic style of the show. This is also where his biblical works explode like in the “Expulsion from Paradise” which is extraordinary sexy. 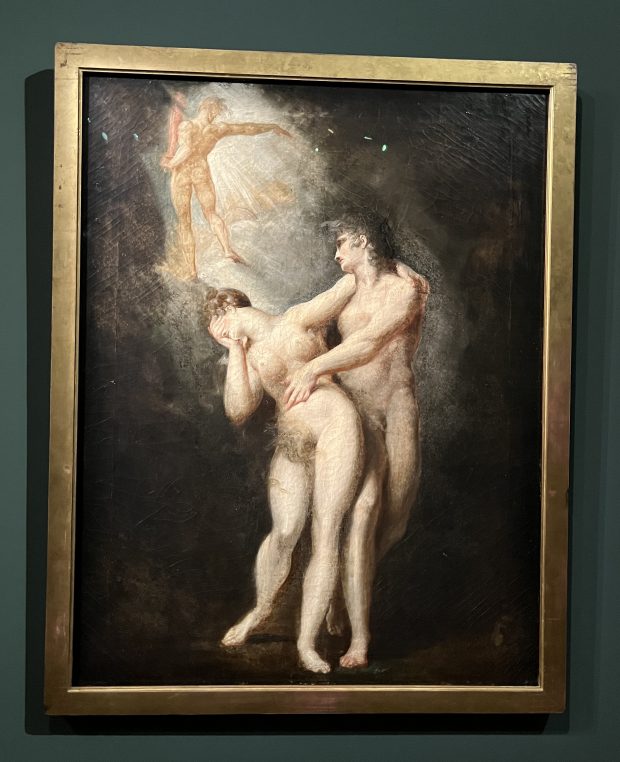 “The Expulsion from Paradise”, 1802, private collection

Hamlet and the spectre of his father follow and a charming painting of Romeo and Juliet lent by Basel. A beautiful Beatrice appears in “Much ado about nothing”, with again beautiful curly hair, in Queen Mab, the curls are more crazy…  One of his most famous painting is the “Nightmare”, where he included a pond on the mare (lady horse) and the night scene. Painted in 1810, it is still in private hands. There were different versions of this work since 1782 and in this one, the incubus exchanges extraordinary looks with the mare. More terrifying works follow, which are illustrated by the “Sheepkeeper’s dream”, a beautiful painting owned by the Tate. 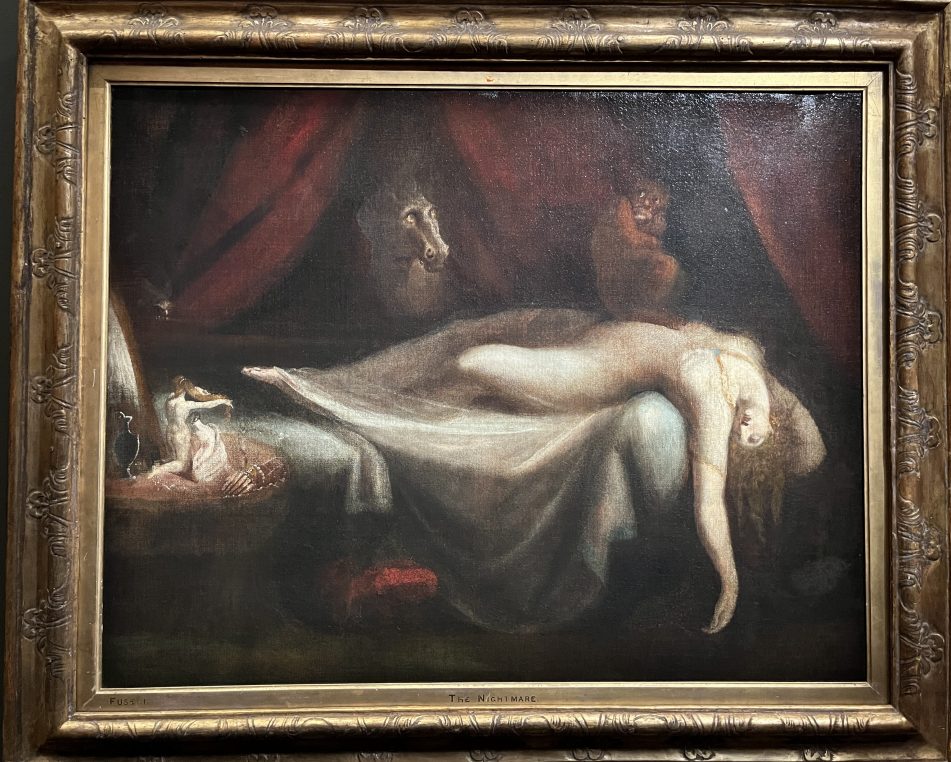 There is a room devoted to drawings and although there are few prints in the show, Christopher Baker, insisted on the fact that Füssli was primarily known for the quality of his prints, whose circulation of course, greatly contributed to his fame in the 18 th century. 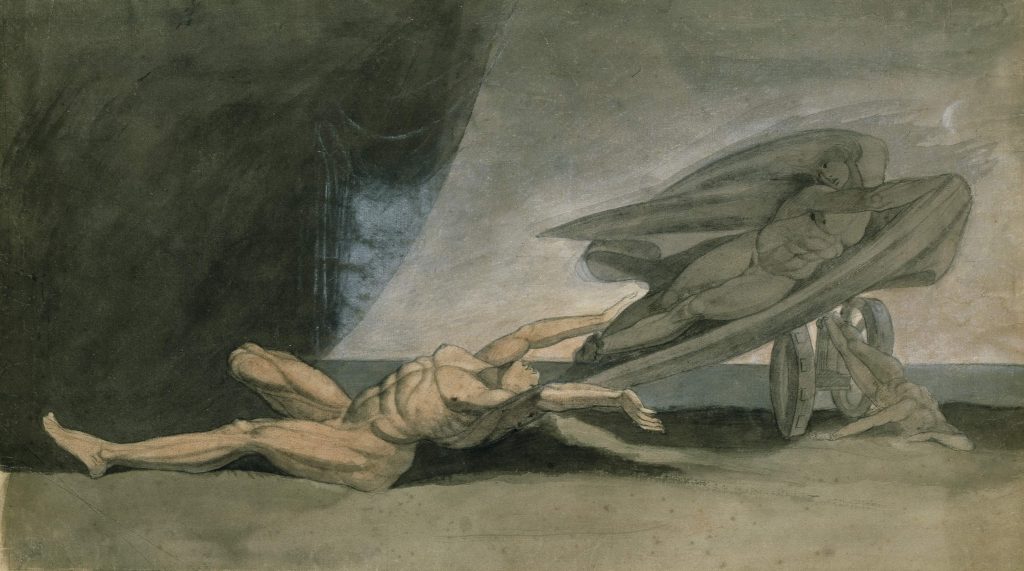 “Achillus searching for the shade of Patrocles”, ca 1810, Kunsthaus, Zurich, Collection of Prints and Drawings, 1916

So do not miss this wonderful show curated by Andreas Beyer from Basel University, Christopher Baker from the Scottish National Gallery and Pierre Curie who runs Jaquemart André. The scenography by Hubert le Gall is immaculate as always  and you cean have lunch on the premises. Musée Jacquemart André, Until January 23.