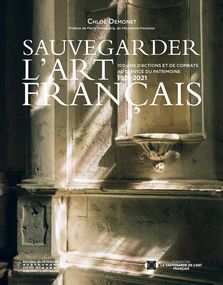 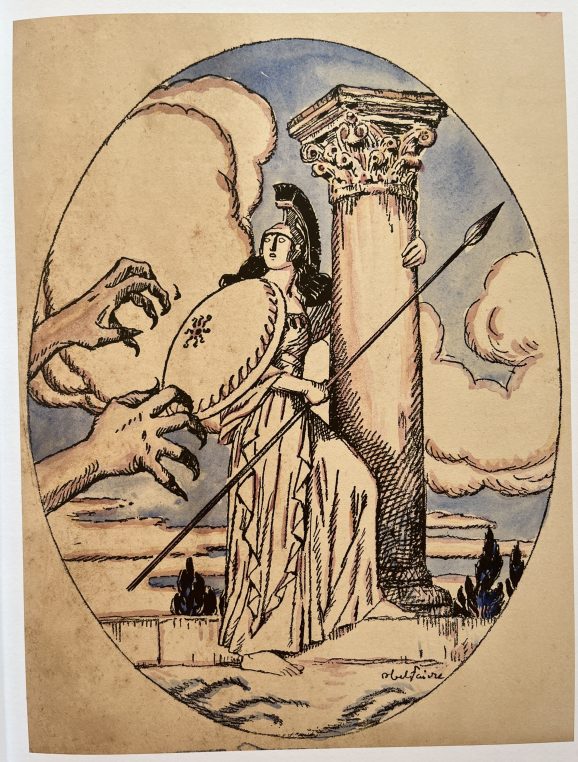 Abel Faivre, logo for the Sauvegarde, 1922

An exhaustive book on the history of the “Sauvegarde”, a new program of “The greatest museum in France” for high schools, and more medieval churches saved in the middle of nowhere… The energy of La Sauvegarde de l’Art Français ‘s president, Olivier de Rohan is endless and his ideas are revolutionary.  On May 19th at 6 pm, there will be a book signing at Hotel de Sully in the Marais. A true tribute paid by Philippe Bélaval, President of Centre des Monuments Nationaux, to this amazing institution founded by Duc de Trévise in 1921. This gentleman and art lover was a great fighter of what he called himself “Elginism” a reference to Lord Elgin who took apart pieces of the Parthenon and sold them to the British Museum. Monuments were not being restored in France after the war and the separation of the church and the state in 1905 had impoverished religious establishments. When he discovered that marble arcades of the Cistercian abbey of Bonnefont, in Occitany, had been transported in a private house transformed in a gendarmerie,  he decided to help the mayor to save the sculptures. 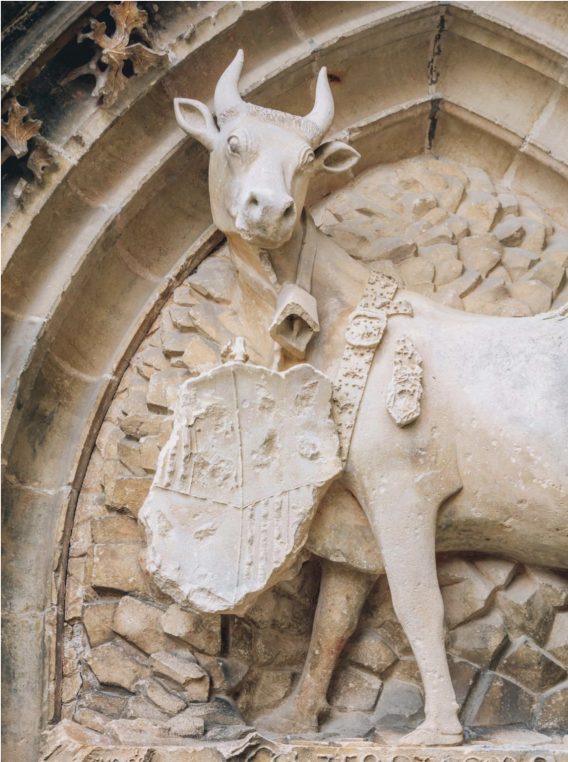 This cow from the Bishop’s palace in Alan, Haute Garonne, was saved by the village’s population and Duc de Trévise in 1920

The action of Duc de Trévise, was completed by his cousin, the Marquise de Maillé’s will written in 1971 which included different castles, farms and buildings in Paris. The Sauvegarde’s mission is again described: to preserve non listed pre XIX th century buildings, and preferably churches. Some funds can also be devoted to sculpture. She had inherited from the Rohan side of her family, the Château de la Motte Tilly in Seine et Marne, which can be visited today, and all the Rohan family souvenirs were given to the Duc de Rohan with a large sum to restore his castle of Josselin, in Brittany. Olivier de Rohan, the now very active president of the Sauvegarde is his younger brother. His main action was to turn the association into a Foundation RUP  (Reconnue d’utilité publique) on November 27, 2017. This is a major move, for it allows the foundation to receive fundings with a higher deduction rate. It also enables it to diversify its activities beyond the will of Marquise de Maillé with new funds. 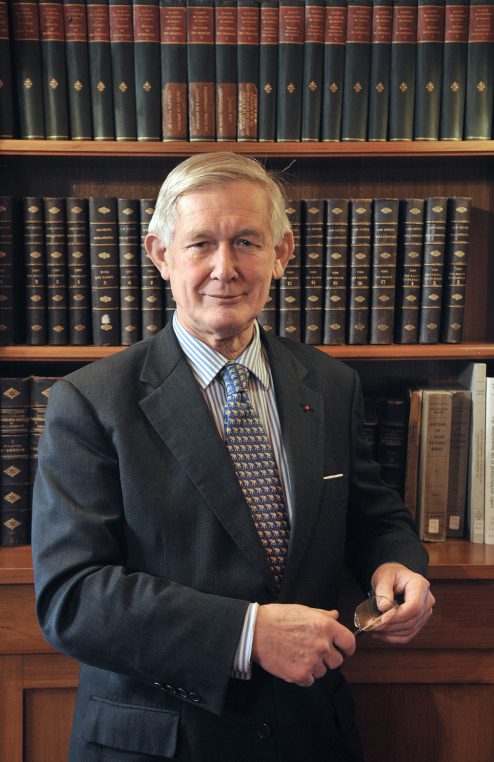 Olivier de Rohan is the captain of this wonderful Foundation

One of the major turn in its history, is the creation in 2018 of “Le Plus grand Musée de France”, a project devised for university students and now high school students, who are sent all over the country to identify in their grandparents’ villages or their childhood churches, works which need to be restored. It started with l’Ecole du Louvre under Henri Loyrette’s Presidency and evolved with Sciences Pô and La Sorbonne, and universities all around France in Nice, Dijon, Lille… The students are asked to identify in their area, a painting, a statue, a glass window which needs repair. It is then appraised by a restorer and museum curators, and the student is in charge of finding money to restore it. It gives him credits towards his or her diploma. One of the first surprises was a painting by Francisco Ribera found in a small church in Brittany. There were many more finds, since attics are a mine of treasures in France.

This week, Pauline de Poncheville, 27, who runs the program for la Sauvegarde, awarded 10 000€ to a lycée in Rouen who chose to restore a painting dedicated to the dead of WWI in the church of Elbeuf. There were 8 projects and the students had to stand and describe them, in order to convince the other students to choose. It is an eloquence competition as much as an Art history course. The work chosen was painted in 1920 by Berthe Mouchel, a lady painter whose brother died on the front. The “poilu”, the soldier, probably represents her brother and he lies in the arms of the Virgin Mary. Typically, Pauline had been a student in the program of “Le Plus grand Musée de France” where she found 40 000€ to restore a mural in the church of Saint Médard in Saint-Méard-de-Drône, Dordogne. She was then studying art history. She later did a series of internships with the Sauvegarde and now runs this important program, traveling all over France to award the money to the best projects. She is looking for 130 000€ (10 000 per Lycée) for this year’s financing… 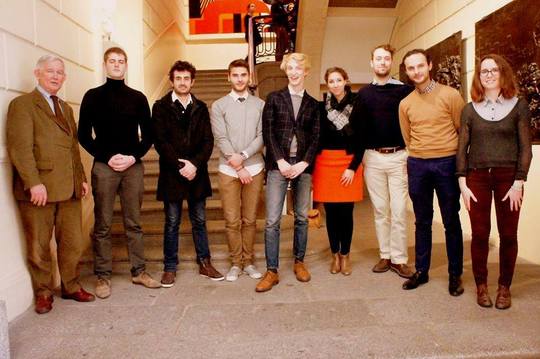 The team of students in Rennes who found the money to restore the Ribera found in a little church of Morbihan with Olivier de Rohan, left

After WWI, the Rockefellers rushed to finance the restoration of the Reims cathedral and of Château de Versailles. French mécènes like David David-Weill gave money for the tapestries in Beauvais, the Italian Mazzotti Biancinelli restored the stained glass windows in Auxerre, and an American woman, Alma de Bretteville Spreckels, who founded the Legion of Honor in San Francisco, joined the effort of the American board of the Sauvegarde with Mr and Mrs Tuck, M. and Mrs Gay, Mrs Vanderbilt, Edith Wharton and Walter Berry. 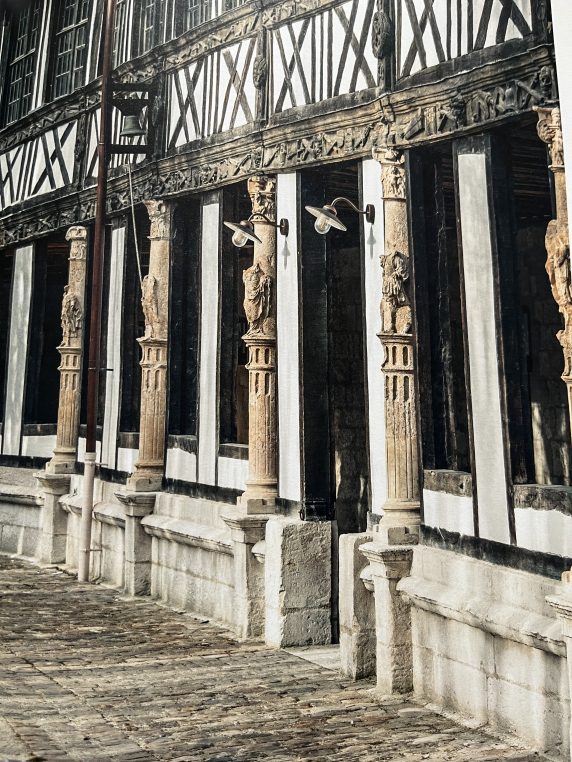 In 2019, the Prix Lambert for research and the publication of a PHD thesis in art history, was awarded to Mathieu Deldicque who was just nominated by Institut de France, Director of Musée Condé in Chantilly. He turned 35 last Friday 6!  And Baptiste Roelly will be co-curator. The Prix Michel Laclotte was awarded for the first time this year to two brilliant young curators, Corentin Dury from the Orléans museum and Yohan Rimaud from Bezançon. 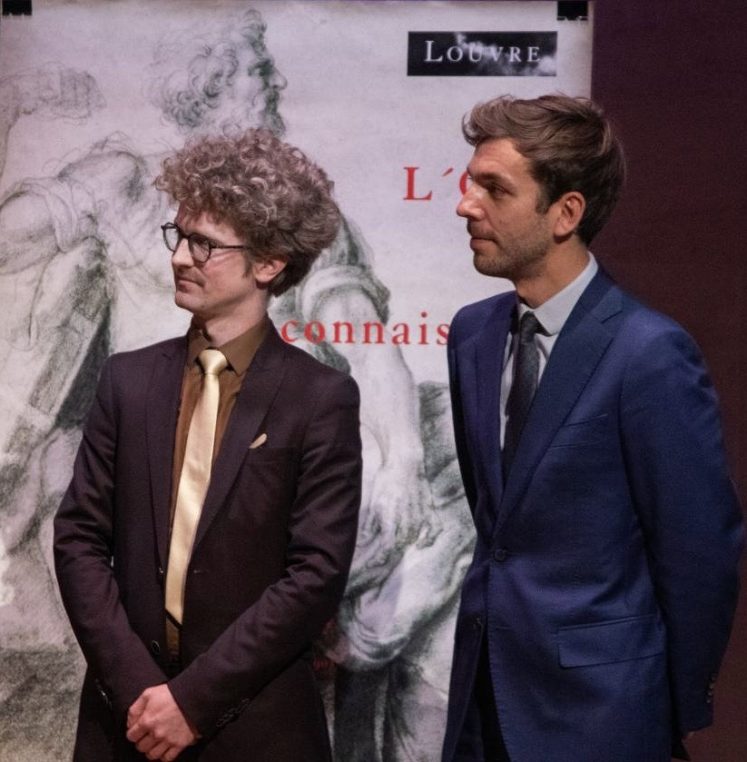 But what is most important with the “Sauvegarde”, is that its reputation of excellence in the restorations it chooses, has made it a leader for saving modest churches all around. When it decides to sponsor a project, the region, the prefect and private local companies join in  because hey know it is important. They have therefore become an ambassador for saving the French patrimony.

The book, “Sauvegarder l’art français” 1921-2021, by Chloé Demonet,  can be acquired from the Sauvegarde, at Hotel de Sully or in any bookstore.  Its website is particularly attractive with many news on all the projects and Lionel Bonneval, its director, runs a very young team of enthusiasts who revere their president.