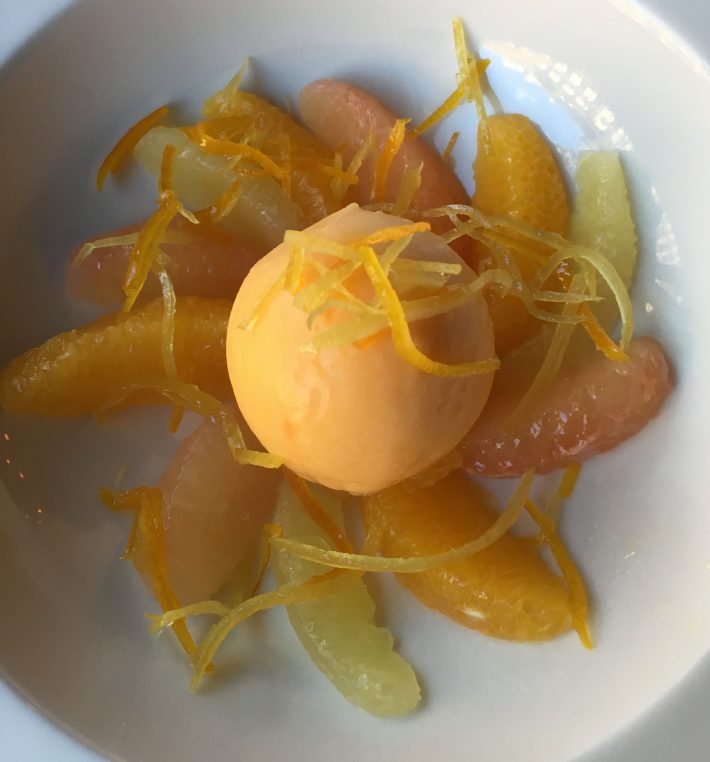 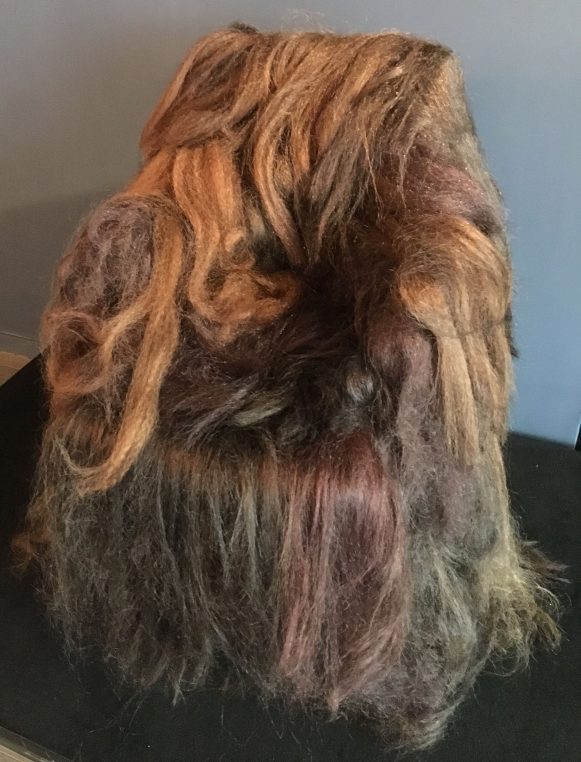 A few theaters have changed hands in Paris this fall and La Scala is one of the most talked about. Ideally located near the République on bd de Strasbourg, it is surrounded by popular shops selling wigs and fake nails. Mélanie and Frédéric Biessy, a successful business woman and a famous theater producer, have undertaken the management of this magical place, abandoned since 1999, and rebuilt by Richard Peduzzi, the mythical decorator of so many Patrice Chéreau productions. The result is a dynamic programme and an excellent restaurant run by Mélanie’s father, Georges Sengel, who still owns restaurants in Strasbourg. 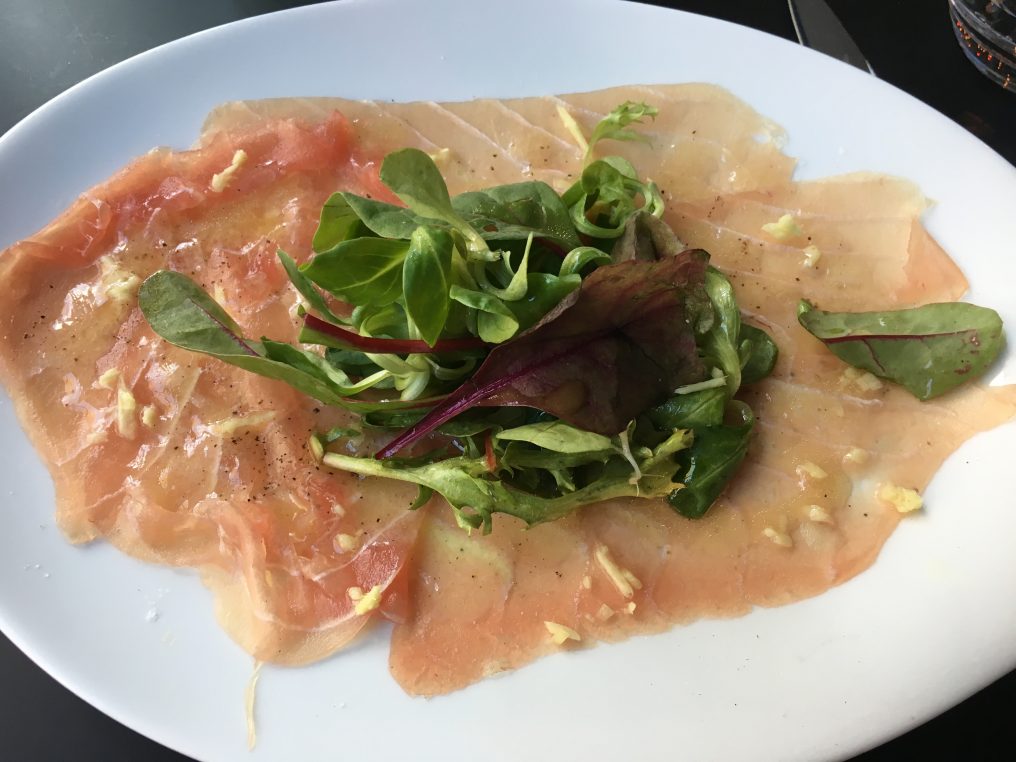 The carpaccio of tuna with ginger is a fabulous starter

Many of my friends had told me about the Yoann Bourgeois show , “Maître du déséquilibre” which I unfortunately missed but it was followed by Thomas Jolly and Yasmina Reza ‘s “Dans la luge de Schopenhauer” with excellent actors. I noticed the evening I went, how busy and fun the restaurant was, and decided to go back for a quiet lunch with Aline Vidal, the art dealer, who is in charge of the visual arts program.

At the moment, she shows two videos on the walls by Clément Cogitore and Laurent Derobert and an armchair transformed by Annette Messager who used wigs and artificial hair to disguise the seat. In December, Stéphane Thidet will take over with another chair. And in February Fabrice Hyber will replace him. After the series is complete, it will be exhibited at MAD. 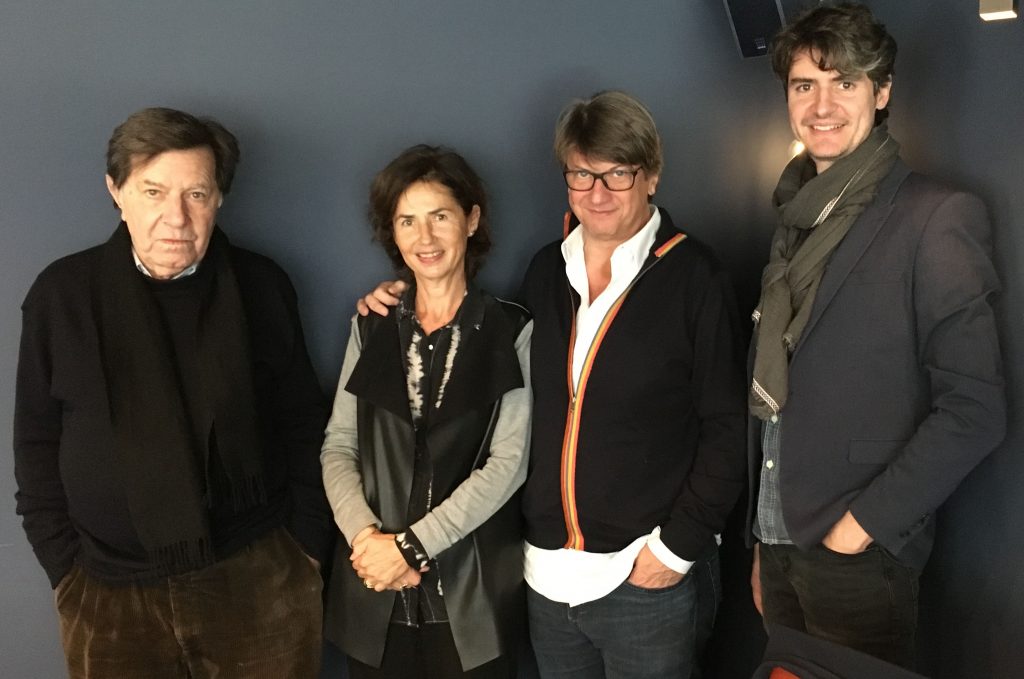 There is a feeling of a very welcoming club at la Scala, and while I was waiting with a glass of red Sancerre, I could observe Richard Peduzzi discussing with colleagues. The director of the restaurant came and chatted with me. Rodolphe Bruneau-Boulmier who is in charge of the music program arrived from France Musique where he produces a morning show. He is also a composer. Everyone was friendly and fun. But most amazingly the three course lunch menu at 22€ was absolutely delicious. 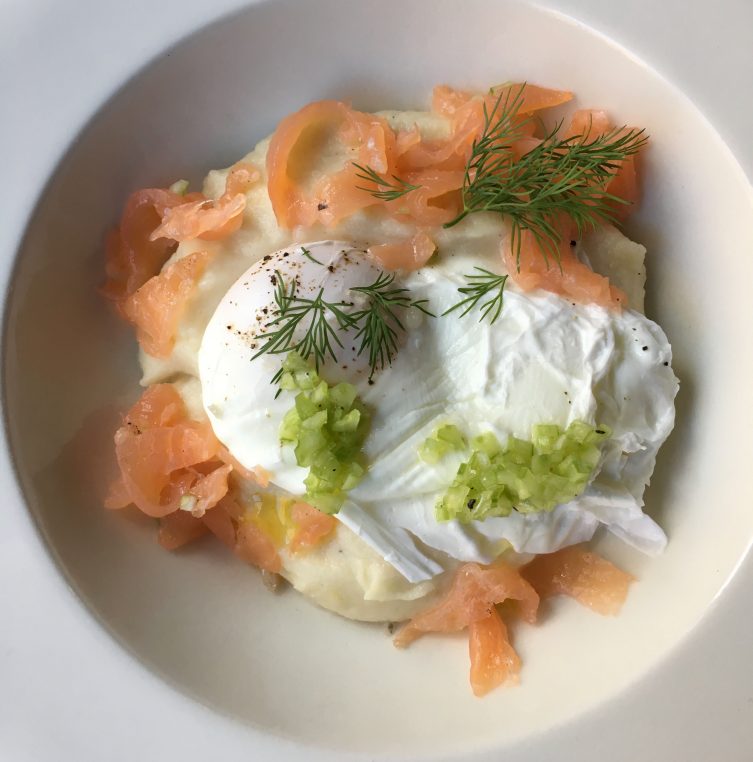 I had the carpaccio of tuna with ginger and tasted the poached egg and celery mousse which was lukewarm and light, and a grilled perfectly seasoned beef tartare. I concluded with a grapefruit and orange salad with tangerine sherbet for dessert.

Aline Vidal being thin and lovely, had a vegetarian Scala bowl, a mix of fresh vegetable. She told me about her projects of screening short artists movies before the beginning of the plays and will keep asking artists to transform one armchair every other month. 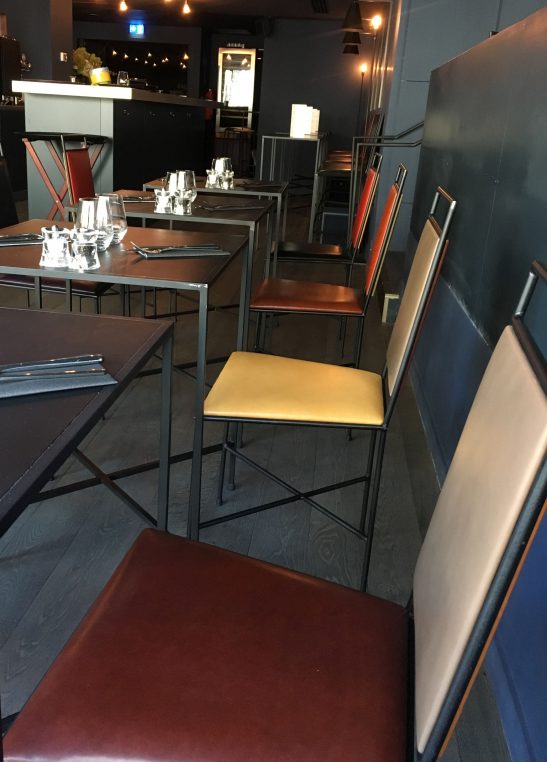 The decor is signed Richard Peduzzi and it is really perfect

The restaurant is on the first floor and dominates the very busy boulevard which is fun. At night, the menu is slightly more expensive (32 € for three courses) and includes oysters, foie gras, scallops, pheasant and mille feuille à la vanille. It is essential to book (tel: 01 40 03 44 13).

On November 26, a musical evening will include Roberto Negro (piano) and Emile Parisien (saxophone) who will improvise on Ligeti’s music in “Les Métanuits”, and on November 30 th, soprano Donatienne Michel-Dansac will sing “An Index of metals” with electric guitars.  In January “Cold Blood” a show with dance, cinema and music will celebrate life. 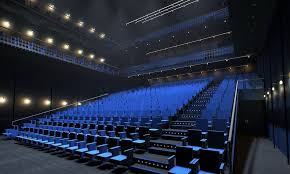 So make sure to visit La Scala very soon because it is already one the trendiest spots of the 10 th arrondissement. And its restaurant is just great and serves all day! 13 bd de Strasbourg. tel: 01 40 03 44 13 restaurant@lascala-paris.com