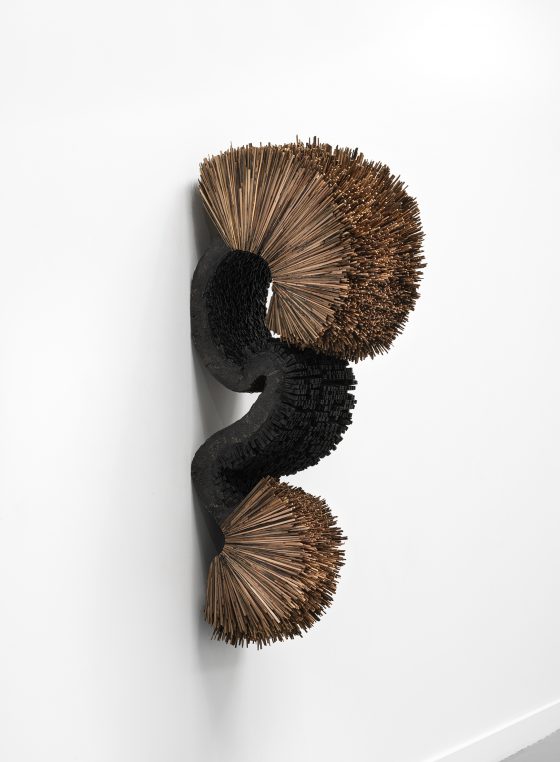 At 60,  Leonardo Drew is now very famous in America but I had never seen any of his works and it was quite mesmerizing to discover, on a rainy morning, his wood sculptures at Galerie Lelong (until July 13). The power which emanates from his pieces is fantastic. Born in Tallahassee, Florida, and raised in the projects in Bridgeport, Ct, with a unique view on the City dump, Drew started early on creating works from discarded objects. “I came to realize this place as God’s mouth”  he once said. He started drawing for publicity at age 13 and studied later at Parsons and Cooper Union in New York. His large installation in Madison Square Park in New York in 2017, was a major moment in his artistic life. He is collected by the greatest museums in the world and now lives and works in Brooklyn. 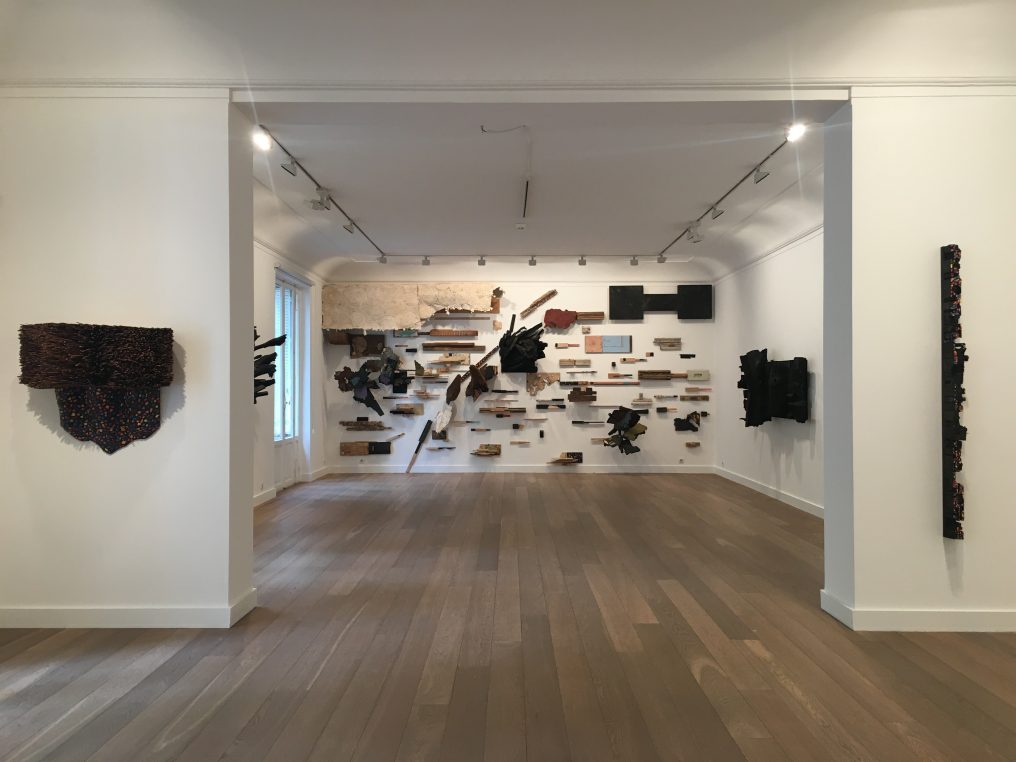 A large installation on the wall of galerie Lelong, rue de Téhéran

This is his first show in Paris so it is an event. Drew likes to mix many different materials. He started with cotton in 1992 and now uses burnt wood and painted porcelain, whose technique he learned while travelling in Jingdezhen, the capital of porcelain making in China. He has also visited Machu Picchu, the Inca city in Peru. Simultaneously monumental and intimate, profuse and sensual, his work uses materials from America’s industrial past. But poetry is always present. As is his incredible sensitivity. 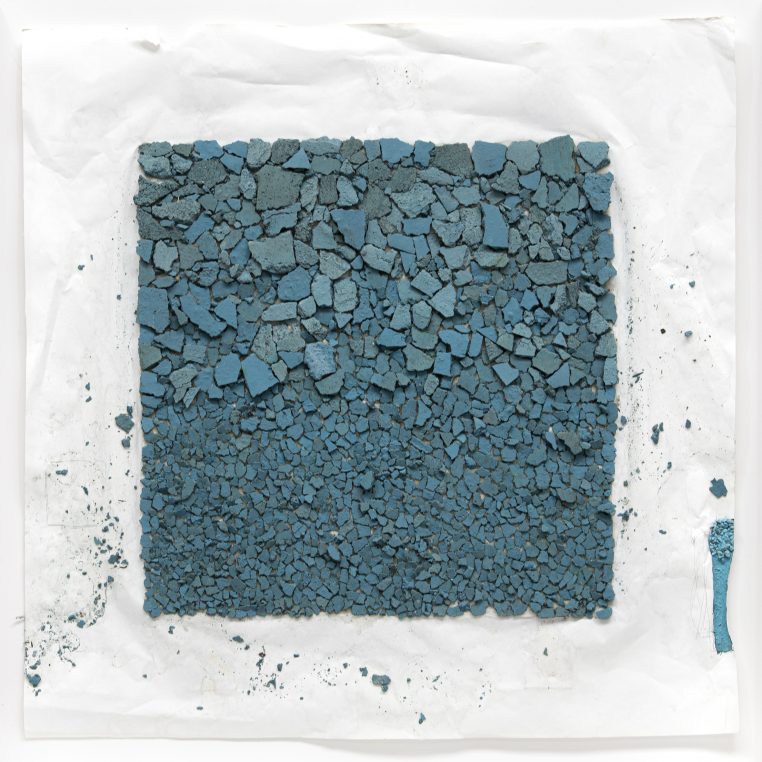 After the first success of his drawing exhibition at 13, he discovered Jackson Pollock at the library and  decided to work in a different way on objects. “I don’t like the idea of being safe” is his motto. He also calls himself a “crack addict of art” and when you see him working in his studio, his energy is obvious as is his sense of humor. He then took a job at Christie’s auction house in order to make a living and it was the year when “Sunflower” by Van Gogh was sold so he, like other employees, received a bonus. This allowed him to spend two years working on his art. 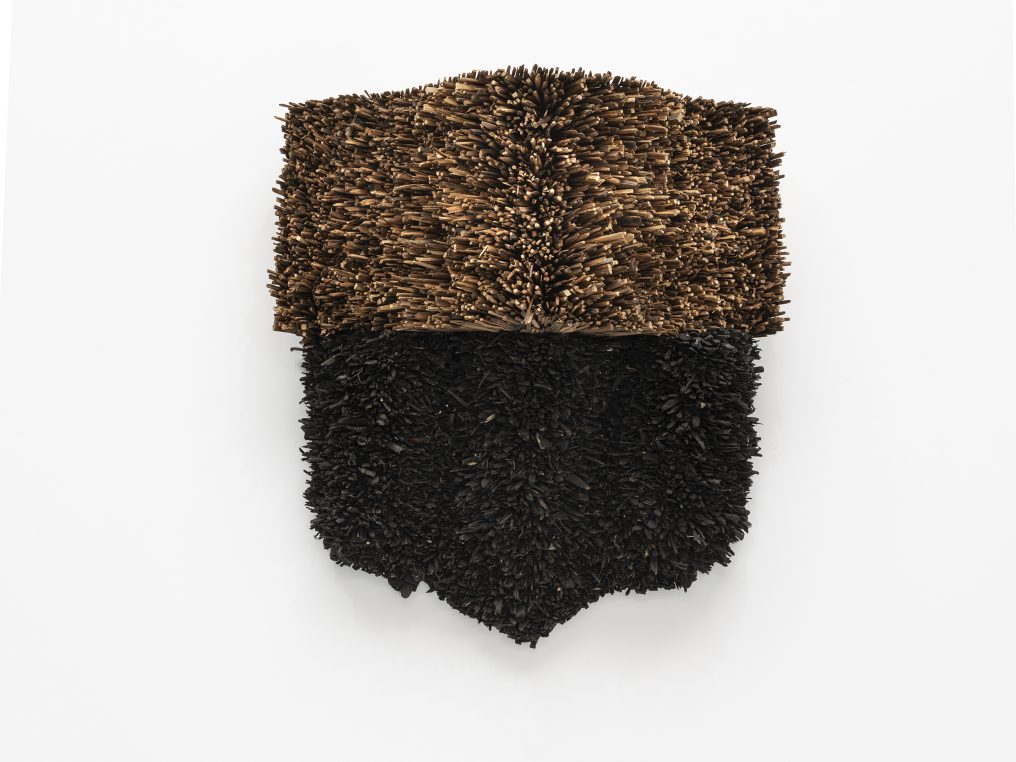 The African inspiration is visible in some of his scultpures and he adds rough material to daily life leftovers. He works on the tension between order and chaos and many of his sculptures are in two parts. Rich in historical and anthropological references, Drew’s work evokes the urban existence, the relationship between man and nature and Afro-American culture. He refuses to give his works a title, in order to allow free interpretation of their meaning.

His sculptures are featured at the Hirshhorn museum in Washington, the MOCA in Los Angeles and at the Tate Modern in London. He is also working on a commission for Google’s headquarters. It’s interesting to watch the YouTube piece on him shot in 2018. 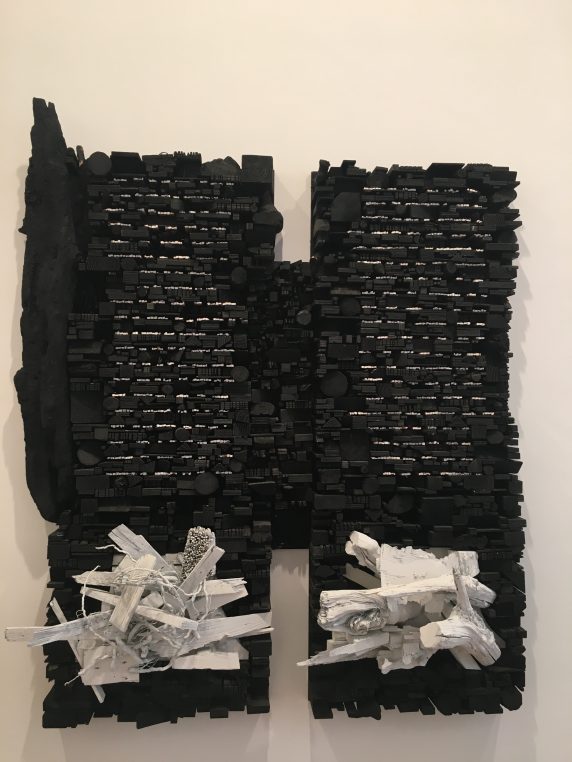 As he started with objects found in a dump, Drew now recreates fake recycled pieces, like rusty iron which he artificially ages.  As always the show at Lelong is very well designed. It is a visual pleasure and the strength of the sculptures moves the visitor throughout. 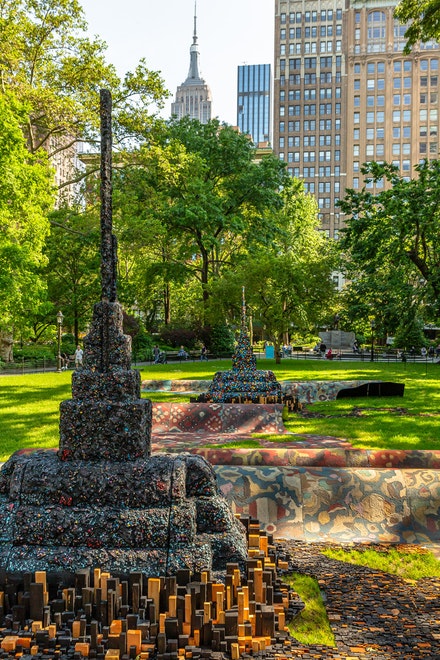 Galerie Lelong, 13 rue de Téhéran until July 13. And also photographs by Rauschenberg in the library. In the avenue Matignon space, Kiki Smith is exhibiting for the 8 th time. Ice Man and Black Madonna are two large mural sculptures of human figures and her hands in bronze are beautiful. In September, Barthélémy Toguo and Pierre Alechinsky will join Ernest Pignon-Ernest.