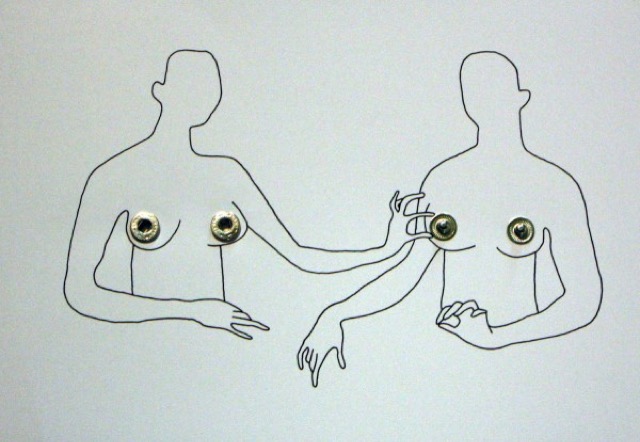 To get over the dreary visit of Frank Gehry’s L.V.M.H foundation building, on a gray January Paris day, I headed for Palais de Tokyo where I wanted to see for the second time, the hilariously dark videos of Louise Pressager. Louise is a young artist who used to write songs and study Political Science in Strasbourg, France, before giving up to the family tradition and becoming a strong and intense artist.
Her father, Etienne, draws magical and enigmatic animals, plants, letters, objects. Her mother Natalie uses photography and images to convey her charming and poetic art. They both teach art in Lorraine. Louise is both very funny and dramatic, almost childish and naive at times and mostly… too grown up. As a laureate of the Salon de Montrouge prize last June, an art fair for young artists, her videos were shown at Palais de Tokyo (the epitomy of trendiness in Paris contemporary art) during the month of December.
« Le gros câlin » (the big hug) is a 4 mn film which stars the Cross in heavy brown fabric and Christ running in a field in Eastern France. There is a pic nic table including bread and wine. It refers to catholic traditions and is both absurd, funny with a Charlie Chaplin zest and so dark…
« L’amour vache » (litterally tough love but with a pond on cowly love) is the litany of a cowboy pulling the feathers off an Indian’s coiffe as you would do off a daisy : I love you, a little, a lot, passionately, not at all… And of course it ends on not at all… History repeats itself. Again apparently a childish game, but actually an incredibly cruel one.
The third video « l’Echauffement », warming up, features Louise punching on a big pink plastic punching ball cock with two little pink hairy balls. The pink makes you think of toys but the young woman in boxing shorts is very determined to destroy the whole piece. The little balls bounce endlessly against the bigger one making it look ridiculous.

The masterpiece conceived especitally for Palais de Tokyo is called « Ça va mieux » feeling better, and is a 26 mn film of a patient’s life in a psychiatric ward. The patient, her father, is hysterically funny, wearing a funnel as a hat. He has a collegue whom he shares a room with and we see him with his wife, doctor, and Death which appears regularly as a very sexy young lady on rollerskates in black leggings. Pills are eaten by hundreds, the doctor is humanness, more machine than man, and every moment of hospital life is described humoristically. Very darkly so again and somewhat chaplinesque.
These four videos are only part of a larger collection of drawings and photographs which Louise Pressager has developped over the years with her family (parents and brother Jean) as her main characters. The intensity and brilliantness of her mind are striking. Her charm and sensitivity only cover a great thinker and a very strong artist. A good sign : after the Montrouge show, two of the greatest French contemporary art collectors have acquired her works. Do look up her website….

5 Comments on “Louise Pressager plays with her videos”