Jean Paul Cluzel, President of the Grand Palais, had asked Lucien Clergue to prepare a retrospective of his work, but he died prematurely. So François Hébel and Christian Lacroix, a team of Arles lovers, took over and prepared « Les Premiers albums », a limpid and striking show of the photographer’s early pictures documented thanks to contact sheets glued daily in his many photo albums. « This is a subjective exhibition and affectionate tribute to someone we loved » said Hébel, a former director of Rencontres d’Arles, while introducing the visit.

When you walk into the large hall, you are struck by the wall to wall carpeting designed by Christian Lacroix : it reproduces the marble floor of the Archevêché in Arles ! and turns into stone later in the show. Both curators loved Lucien Clergue. With his daughter Anne, who runs a gallery in Arles, and lent all the photographs, they seemed to have had a lot of fun hanging the show. The long wall at the entrance on the left, is covered with 188 « abstract » black and white photographs of the swamps of Camargue,  all prints which were hanging in his studio.

These are all the proofs left of an artistic life started very early at 19, when he met Picasso and showed him his first shots. His mother wanted him to be a violinist and but when she died, he was only 18, and he frantically photographed beautiful naked women to fight his pain.

After Edward Steichen had bought nine prints from him in 1960, he was exhibited at MoMa in New York at 27, and was the second French photographer to be shown there, after Henri Cartier Bresson. Previously Max Ernst had bought some pictures from him. 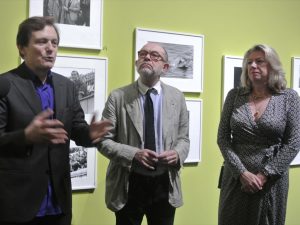 François Hébel, Christian Lacroix and Anne Clergue at the opening

The exhibit is separated in sections, women nudes he is famous for, Arles after the bombs, bull fights, gipsies, Picasso, Cocteau, Saint John Perse, language of the sand. The architecture of the room is such that there is not a dull moment in the show, where famous pictures are hung along harlequins and little girls noticed by this « poet photographer » who founded « Les rencontres photographiques d’Arles » with two of his best friends, Jean Maurice Rouquette former director of Musée Reattu and Michel Tournier.

His filmed interview of 2014, shows a very young 80 year old, who tells the magical story of his discovery of photography thanks to Photomonde, a glossy photo magazine published in Toulouse. A nude by Edward Weston was on the cover and the first Bourdin pictures as well as Brassaï photos were inside. We are in 1953. 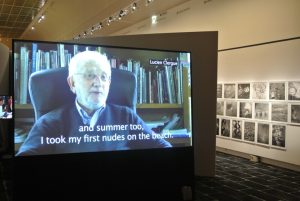 The filmed interview by François Hébel is fascinating.

Picasso helped him enormously introducing him to Cocteau and to collectors in Cannes. Later he discovered the music of Manitas de Plata, a brilliant gipsy flamenco guitarist, and becomes his manager. With him, he will discover the world and go to Carnegie Hall in 1965.
When he sees Guernica in New York, he tells Rouquette : « to reach Guernica at MoMa, you have to walk through many photography rooms. that means that photography is important. » In 1971, they start « Les rencontres d’Arles » with a group of photographers who trust him and give him pictures for Musée Reattu. Out of 40 artists, only Cartier Bresson and Avedon insisted on being paid. Jérome Hill a great English collector gave him forty Edward Weston prints. 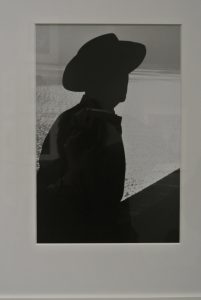 His southern accent, his simplicity, his sense of humour show a charming Lucien Clergue who built his career on photographing life in Arles and succeeded. He published more than eighty books and created one of the most important photo festivals in the world.

The show is being inaugurated while Paris Photo is taking place next door. What a tribute to French photography !
(until February 15 at Grand Palais)