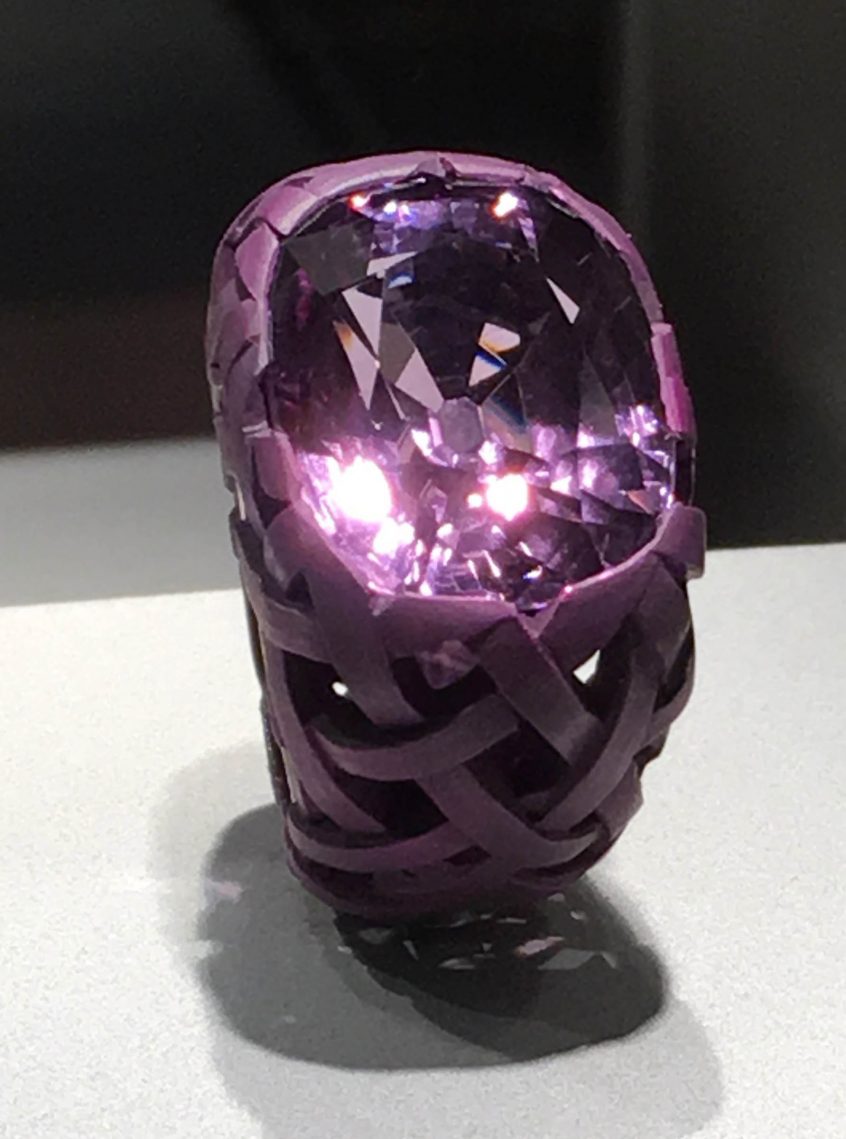 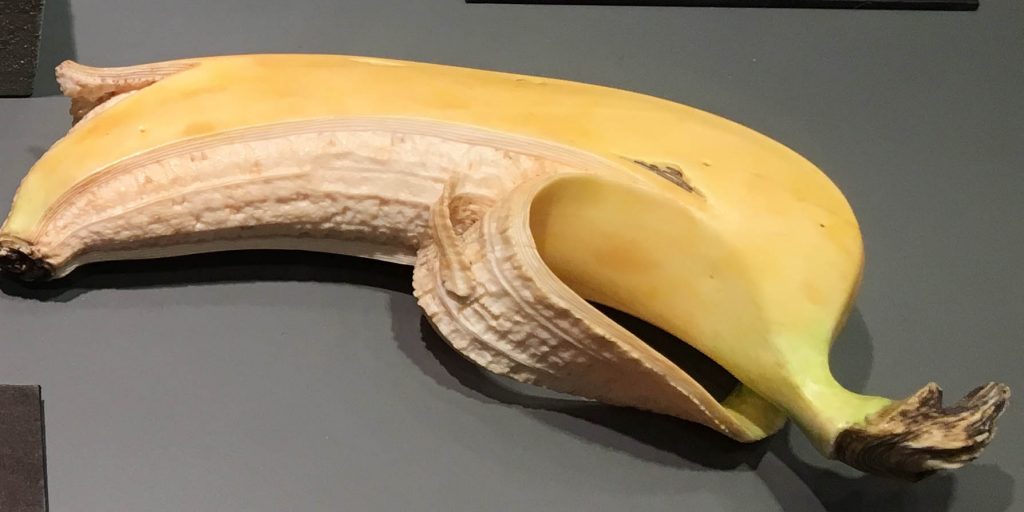 The intense excitement started at 8 am at Gare du Nord. The whole quay was filled with dealers, collectors and journalists who were all anticipating walking into the 30 the Maastricht art fair with the happy few who are invited to the preview at 11 am exactly. After having travelled by train to Liège and taxied to Maastricht, in the Netherlands, the three hour trip through three countries gave us the privilege of discovering the greatest treasures in antiques, old furniture and old and contemporary paintings, jewellery, Chinese art, etc…270 exhibitors chosen with great care by the TEFAF organizers.  And the emotion was even more intense than expected. 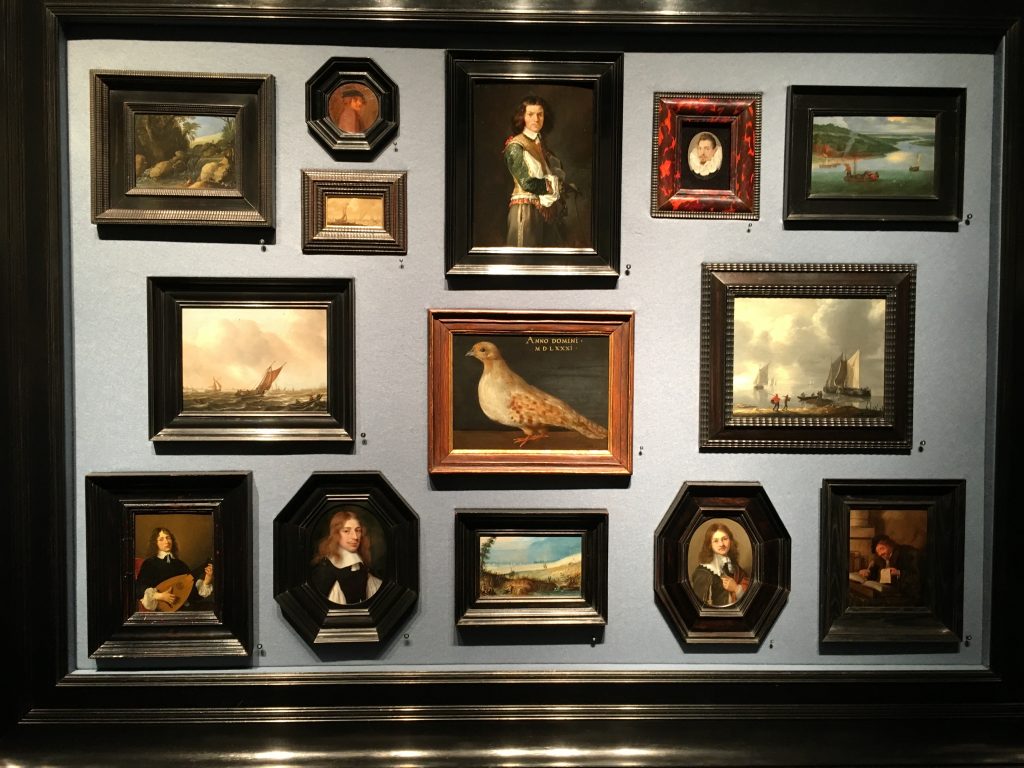 Maastricht is to old art, what Basel is to contemporary art and after the first half hour at the fair, I was so overwhelmed by the beauty of everything that I had to stop for a few minutes and relax. The first stand on the left when you enter, is Galerie J. Kugel who were showing the famous Blenheim Bronzes, “The Wrestlers” and the “Knife Grinder” which created a scandal when they left the United Kingdom three years ago. 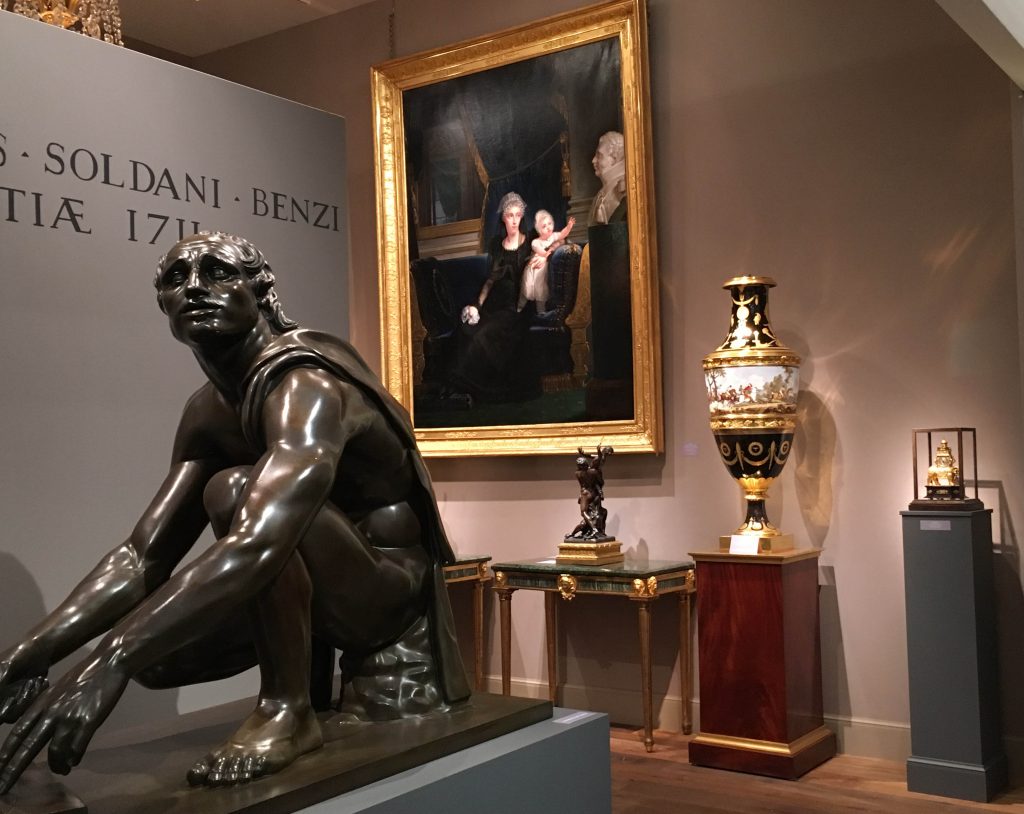 On the Kugel stand, Massimiliano Soldani-Benzi, The Blenheim “Arrotino”, the Knife grinder, 1711

The Kugel brothers, Nicolas and Alexis, who have attended Maastricht  since 1991, always show exceptional pieces and this year was no exception.

I then saw at Ben Janssens a sublime carved limestone torso of a buddha and a Japanese half peeled ivory banana. This is when I had to sit down, for I was too excited ! Thank goodness, ravishing young men and girls were serving tea all around to the 10 000 visitors invited on the first day.

This is when I hit the “Allegory of Melancholie” , 1570, South Netherlands, a perfect little marble at Kunstkammer Georg Laue, Münich. 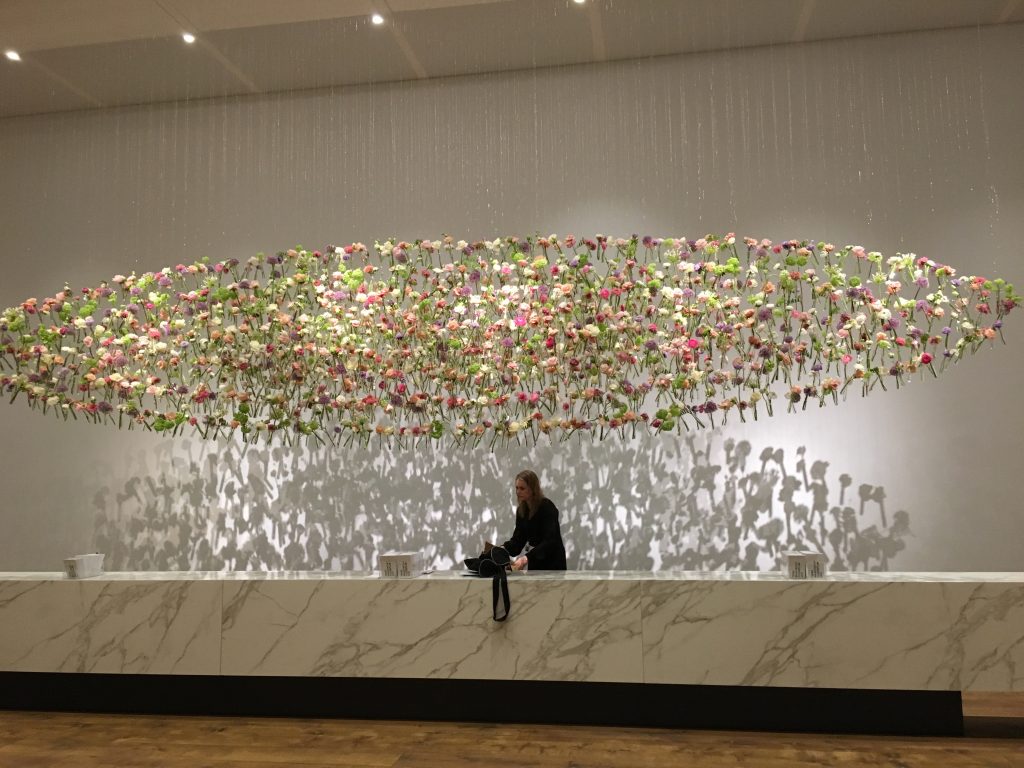 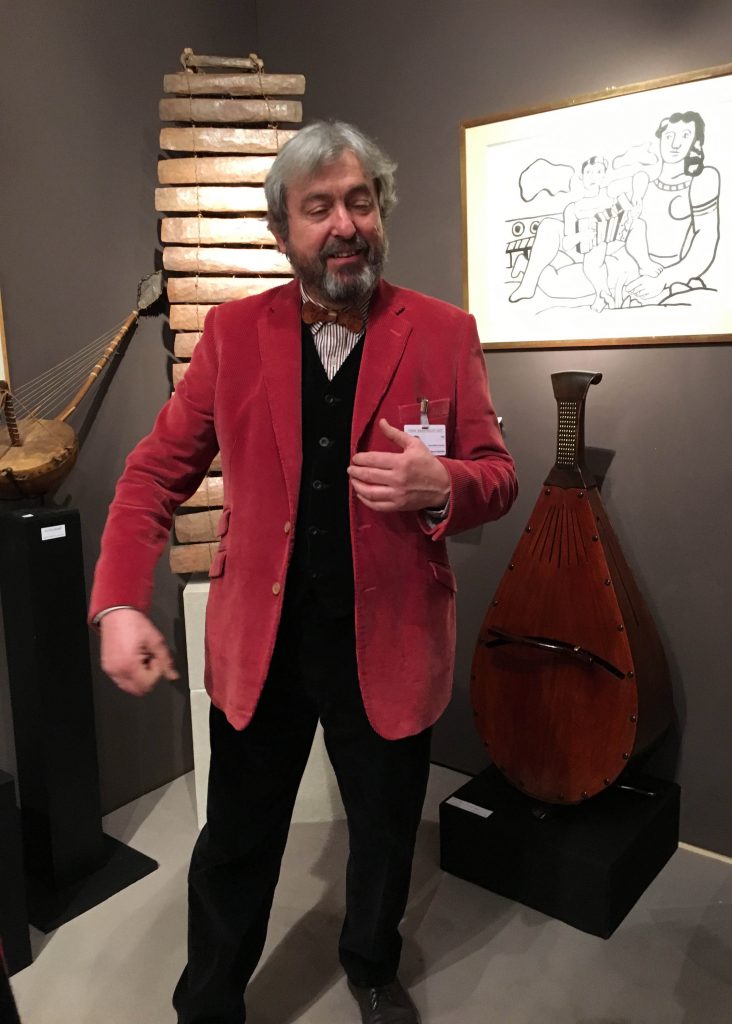 Based in Burgundy, Jean Michel Renard specialises in old and original musical instruments like this Cecilia  from 1861 which is an accordion and plays like a cello

I then unexpectedly fell upon Jean Michel Renard in his musical instruments booth. He lives in Bellenaves, a small village in Burgundy, plays well enough of any instrument to show how his Cecilium (which looks like a cello) works, and how his billiard/piano is tuned. He also sells compressed Arman violins and the most excentric music instruments. I learned that a museum of Ceciliums was going to open in Eu, in Normandy this spring… 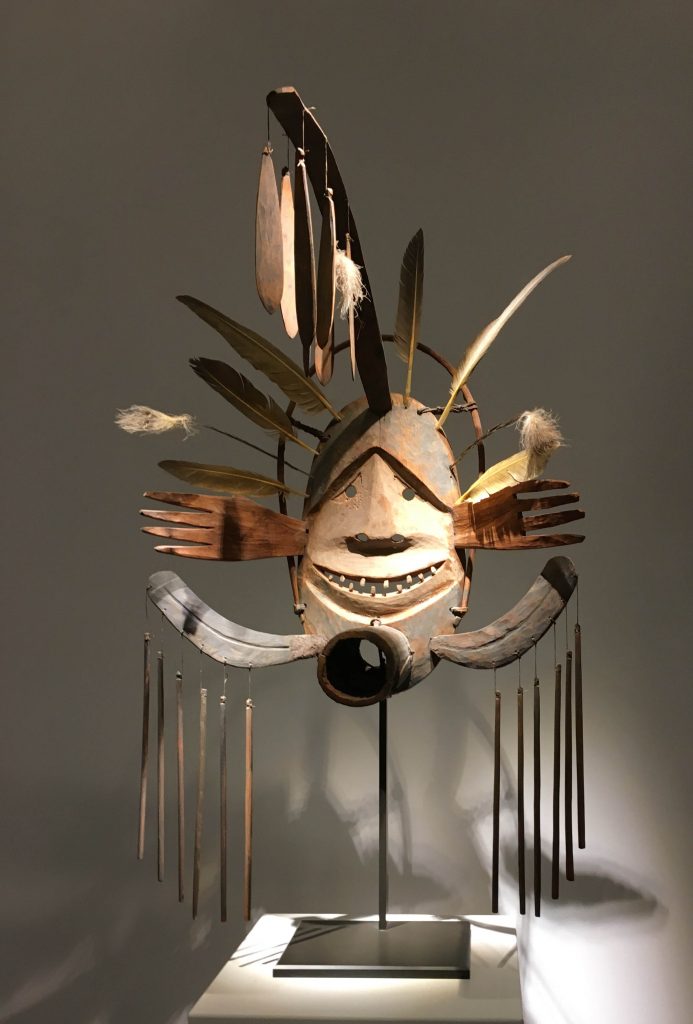 I fell in love with a mask from Alaska, probably the only affordable item of the fair, at 4 800 euros and also with Spanish jewellery designer Luz Camino’s broaches. While having oysters with an elegant long time friend, I found out hat she had a whole collection of jewelry by this Spanish artist who is a protégée or JAR. 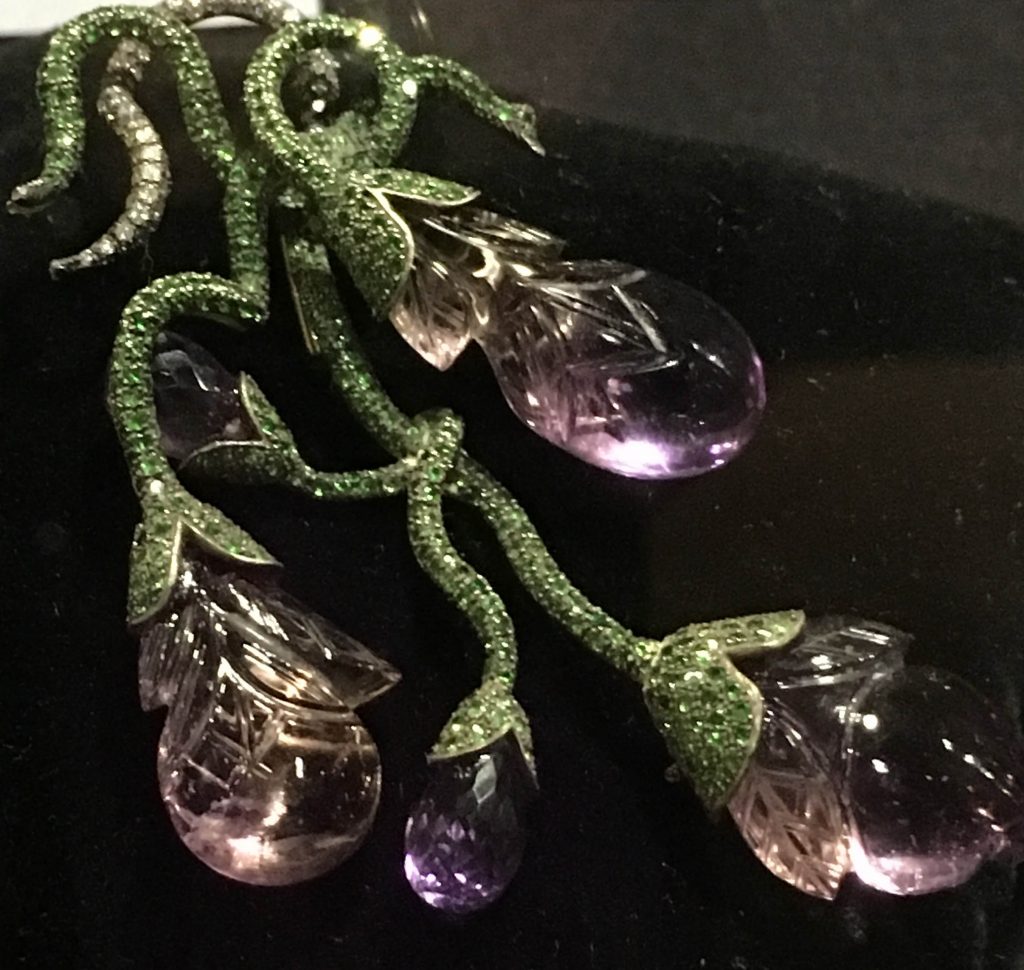 There was a  beautiful Artemisia Gentileschi, « Bathsheba at her bath » which would have pleased Alexandra Lapierre and a pretty pastel by Elizabeth Vigée Le Brun at Adam Williams Fine art, New York. 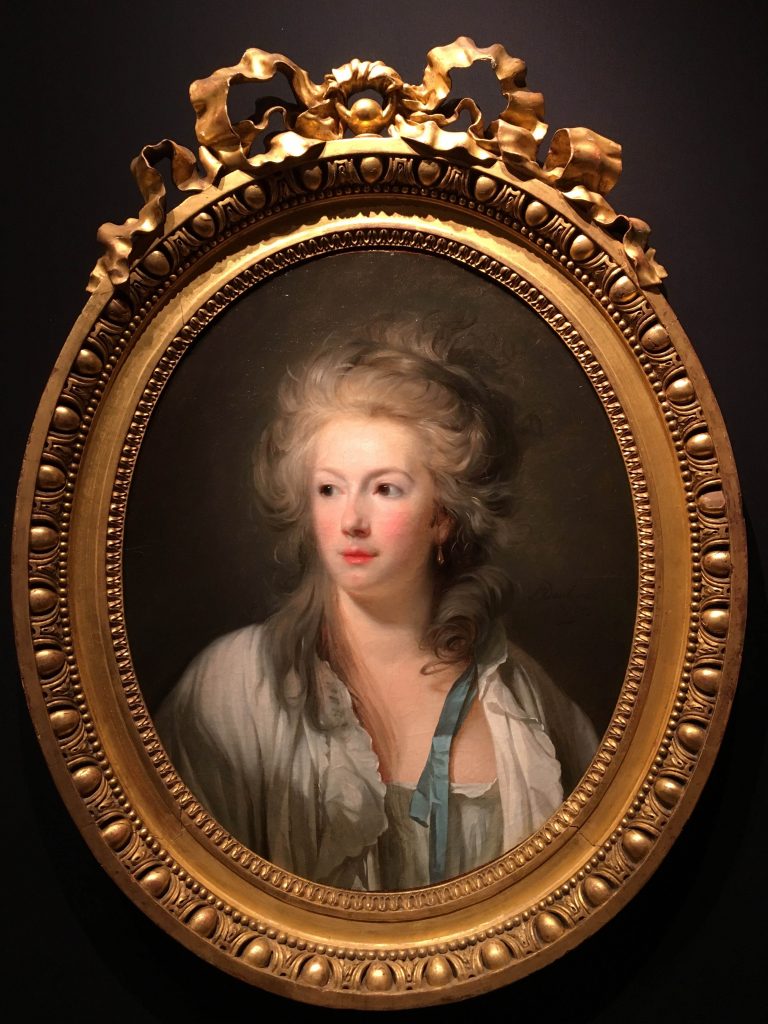 Didier Aaron has a somptuous portrait of Louis XVI standing by  Antoine-François Callet and a lovely Danloux which I would not mind hanging in my bedroom. A large portrait of the Vanderbilt family in Saratoga Springs by Franz Dvorak suddently transported me miles away. 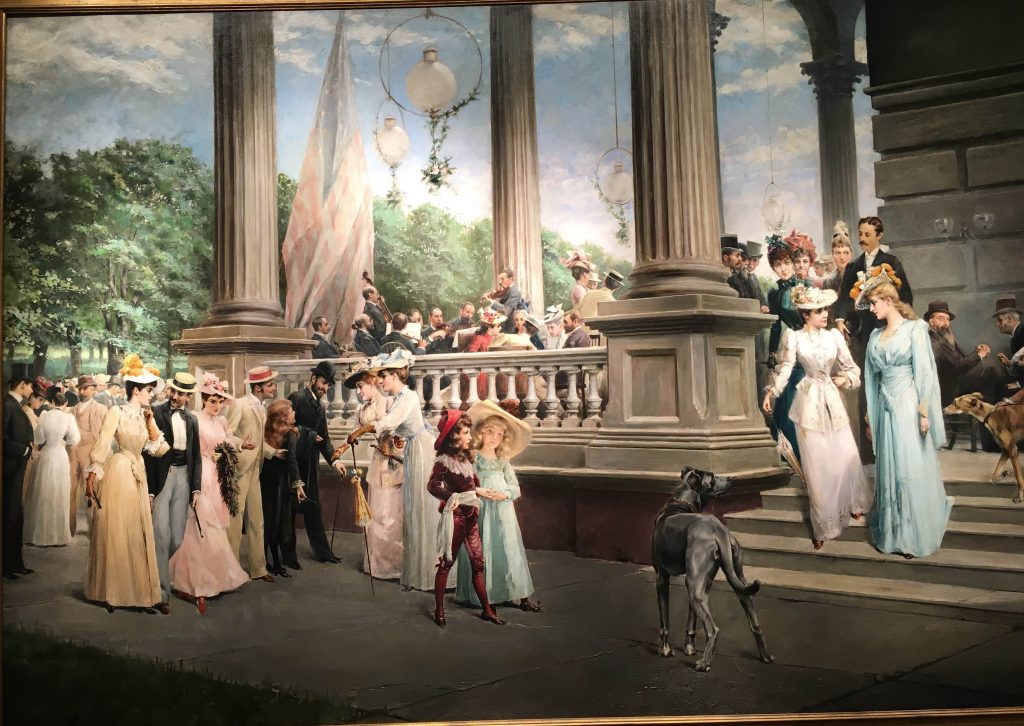 A pretty room lined with six panels depiciting the life of Diana and Alfred Duff Cooper  and made for their house of Chantilly while they are posted in Paris, was fun to fall upon.  Just as much as a weird fireplace with the contemporary « Misfit Pheasant/cat” by Thomas Grunfeld at Hidde van Seggelen, London. 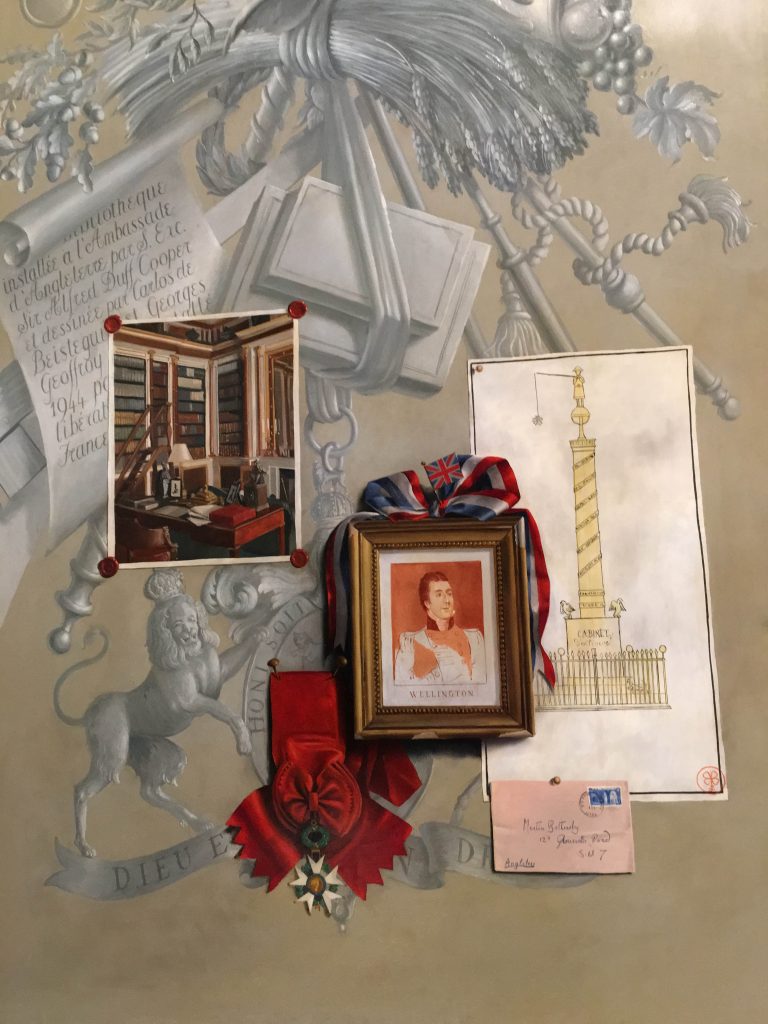 Martin Battersby, detail from a set of 6 panels depicting the life of Alfred and Diana Duff Cooper. “The Paris Embassy”, painted for the Duff Cooper house of Saint Firmin, Chantilly in 1950

Many astonishing Chinese statues and Japanese ceramics would have tempted me including “Fall wind” a porcelain by Satoshi Kino (b.1987).  Medieval illuminated prayer books were impressive but a head of the Virgin in tears, « The Virgin of solitude » by Pedro de Mena y Medrano, 1660, fascinated many visitors on the Spanish stand of Caylus Madrid. 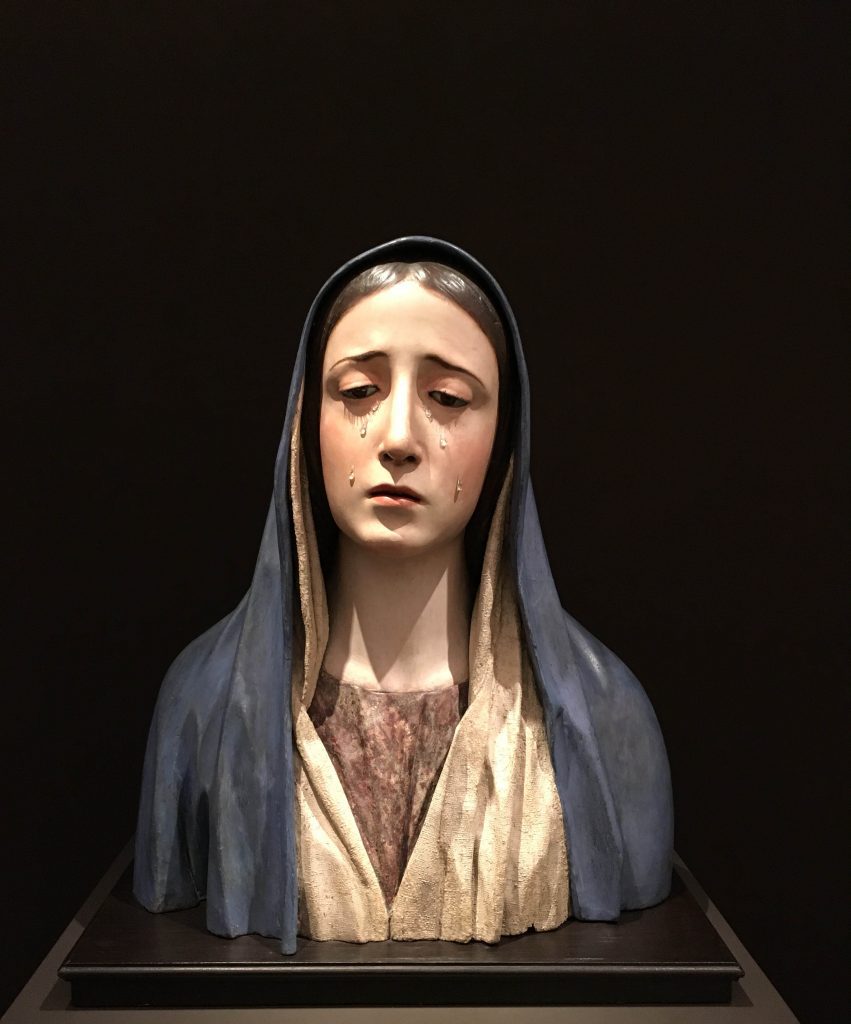 If I wanted to sum up this magical day, I would say that everything was perfect, from the elegance of the public to the quality of the decor, excellent food, diversity of art and kindness and efficiceny of the myriads of helpers.

All languages were spoken on the aisles, mostly French and English, but German, Dutch, Spanish and Italian were definitely frequent. One felt totally at the heart of a vibrant Europe. And the sun came out in the afternoon which of course ended the day perfectly. 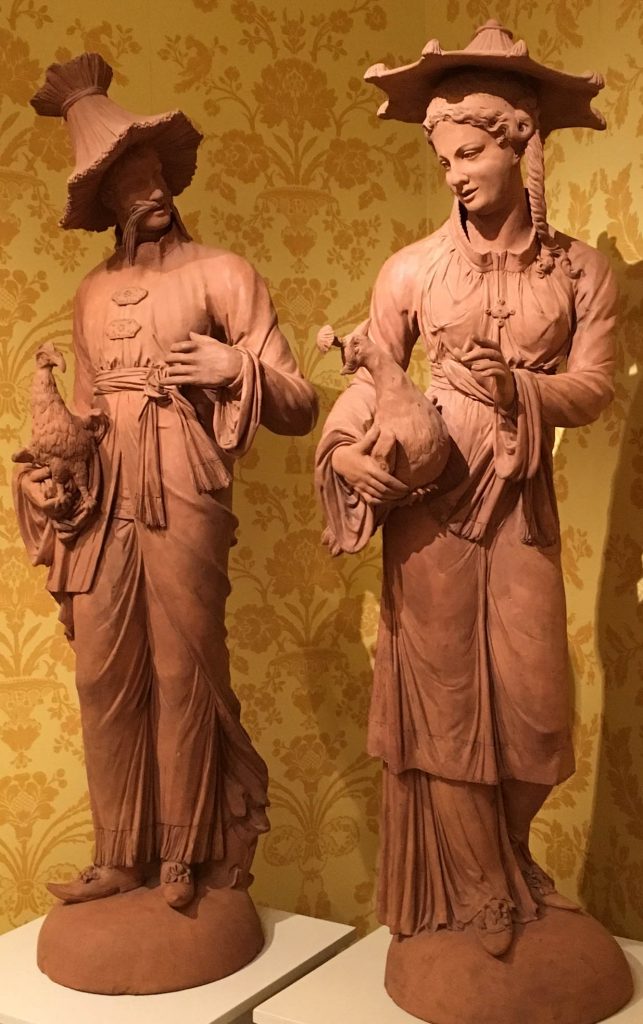