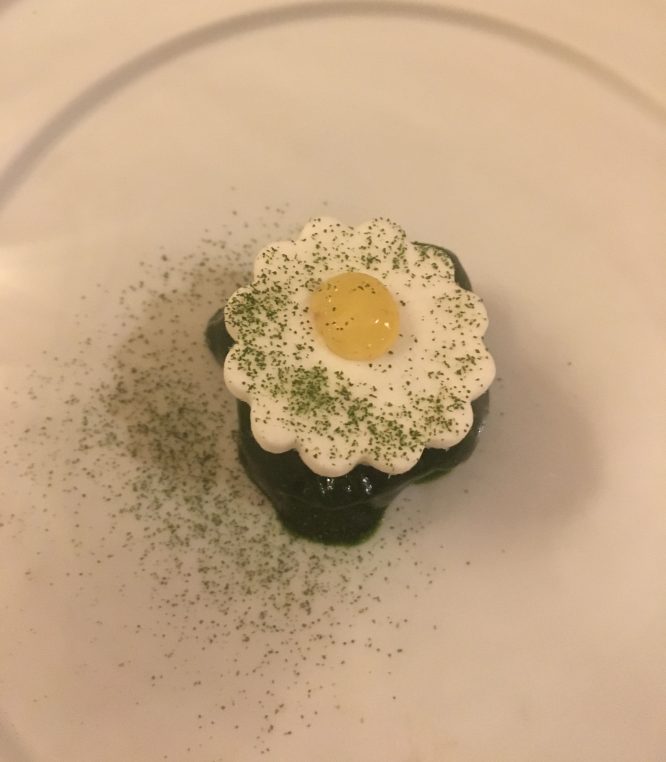 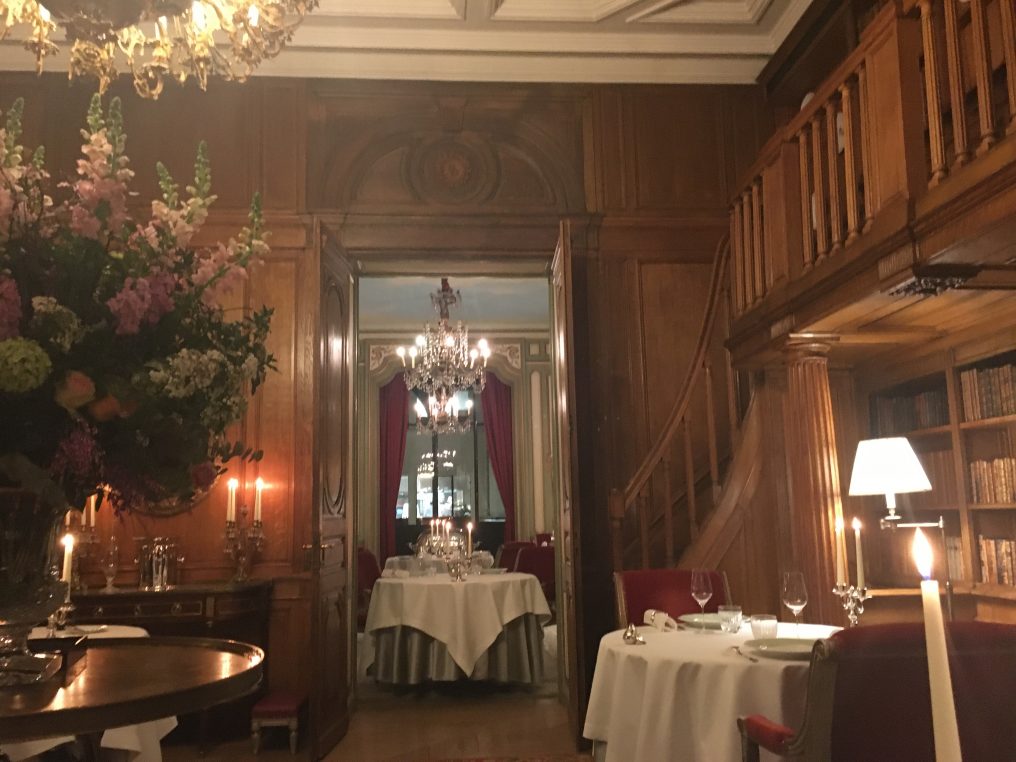 I am always worried to be disappointed when I am invited in a fancy restaurant. Most often, the ceremonial style of the waiters, the complicated dishes, the difficulty of choosing in the long expensive menu, tire me off before I start eating. Well, there is none of this at Le Clarence, the two star Michelin restaurant which opened five years ago on avenue Franklin Roosevelt with chef Christophe Pelé. You only have to decide on the size of the meal (three courses, five courses or seven), and on the wines. Then dinner is served to you in a magical ballet and I have to admit, I was totally fascinated. 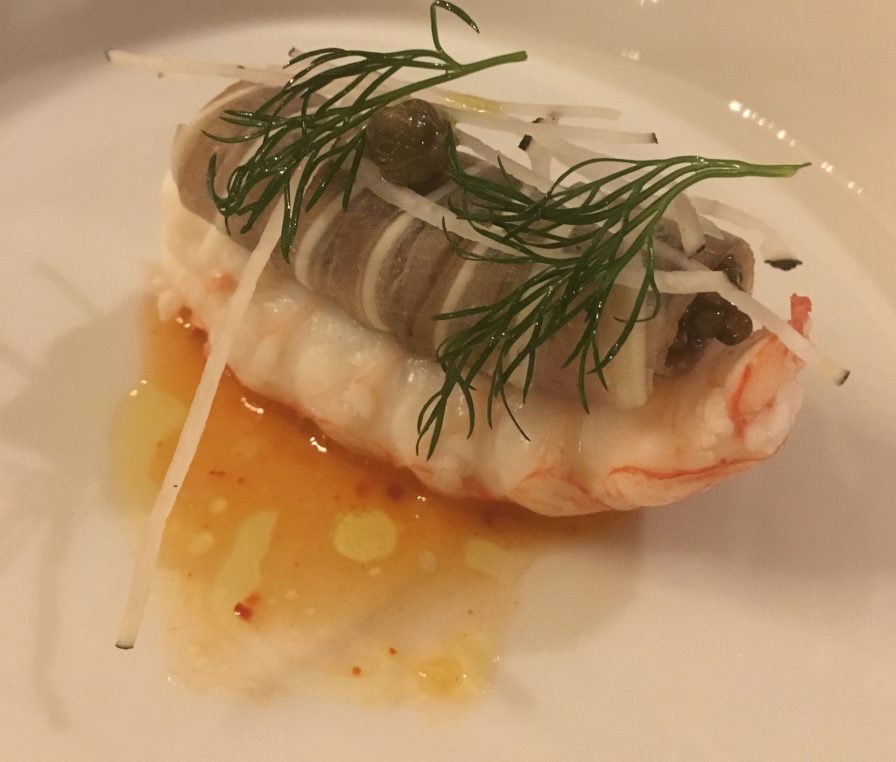 Langoustine decorated with caviar and radish

The minute you sit down, the butler brings a stool for your handbag, and all kinds of little plates arrive with cheese puffs, or fried niblets, rice with lemon caviar and a rince doigts… Then you are offered an apéritif. I was so stunned that I thought I might have inadvertently ordered a gastronomical dinner while booking on the internet. It is just that at le Clarence, you are being taken care of as if you’re in a private house and your host was taking care of everything.

It does belong to Domaine Clarence Dillon, which is well known for owning Chateau Haut Brion and a number of excellent vineyards in Bordeaux. The founder’s great grand son, Prince Robert of Luxemburg, is now presiding over this delightful empire, after his mother Joan Dillon and second husband Philippe de Mouchy ran it since 1975. 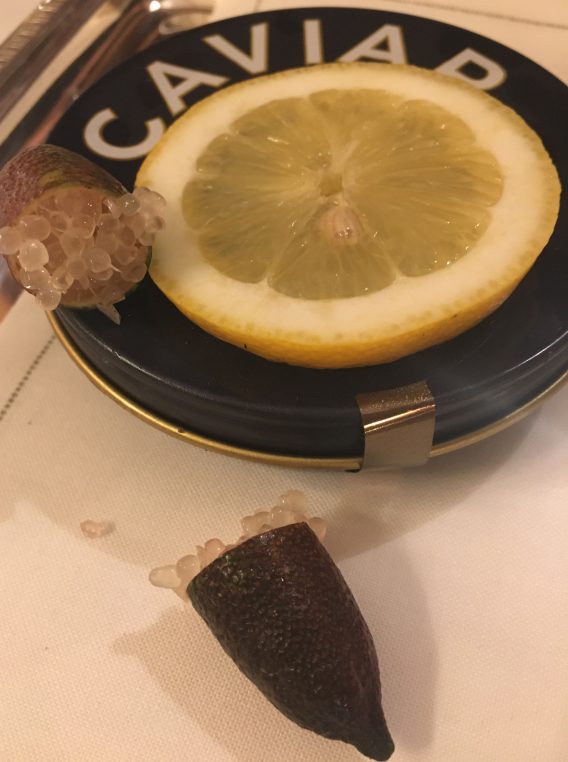 When I commented on the lemon taste and texture in one of the appetizers, a young chef arrived with a caviar tin and a slice of lemon and the actual lemon caviar fruit, which grows in South Africa but has been developed in Perpignan. It was fascinating to discover a new fruit and I particularly appreciated his sense of humour!

Once we had decided on the size (and the price ) of the menu, we ordered wine by the glass, La Clarté de Haut Brion for the white and La Chapelle de la Mission Haut-Brion for the red. They are both more modest variations of Château Haut-Brion. And they were both excellent. A sinful brioche was brought in lieu of bread. 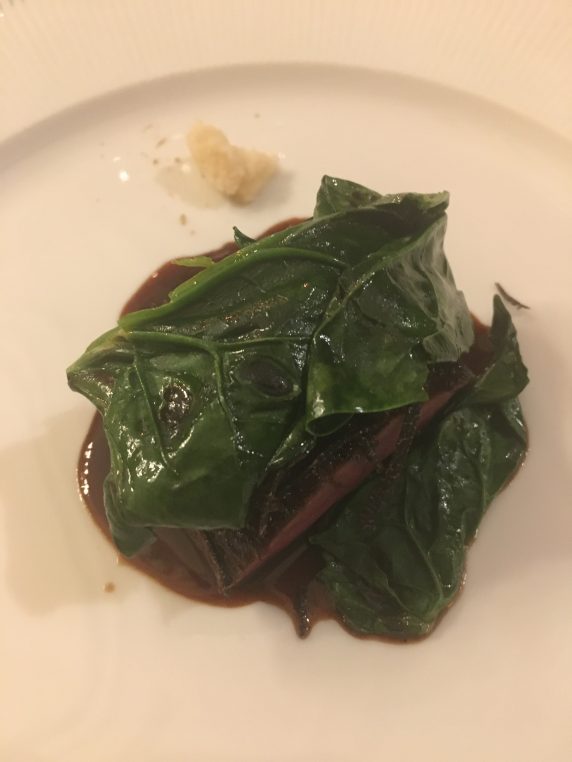 Perfectly cooked chevreuil (deer) with a touch of horseradish

The first course of fish, was three versions of langoustines, served individually and more delicious one than the other. This made me comment to my friend, “we are on a treasure hunt”. Not knowing what comes next is part of the exquisite experience… I had asked for meat as a second course and we were served chevreuil (deer), so tender that it must not have been hunted at all,  with a ravioli and purée de pommes de terres drowned in truffles. Again an incredible surprise. All portions are small enough that you never feel you’ve had too much.

Another version of the langoustine, cold this time

By this time, we had been sitting at the table for almost two hours without noticing the time go by. We could watch the six chefs in the kitchen working away like in a movie and enjoyed the decor of books and classical French fabrics. A single man who seemed to have his habits there had finished his dinner, three businessmen arrived without a tie, a lively table of younger people were next door. And we were in seventh heaven. Because there are so many little dishes being brought to you, you never quite know where you are in the meal. 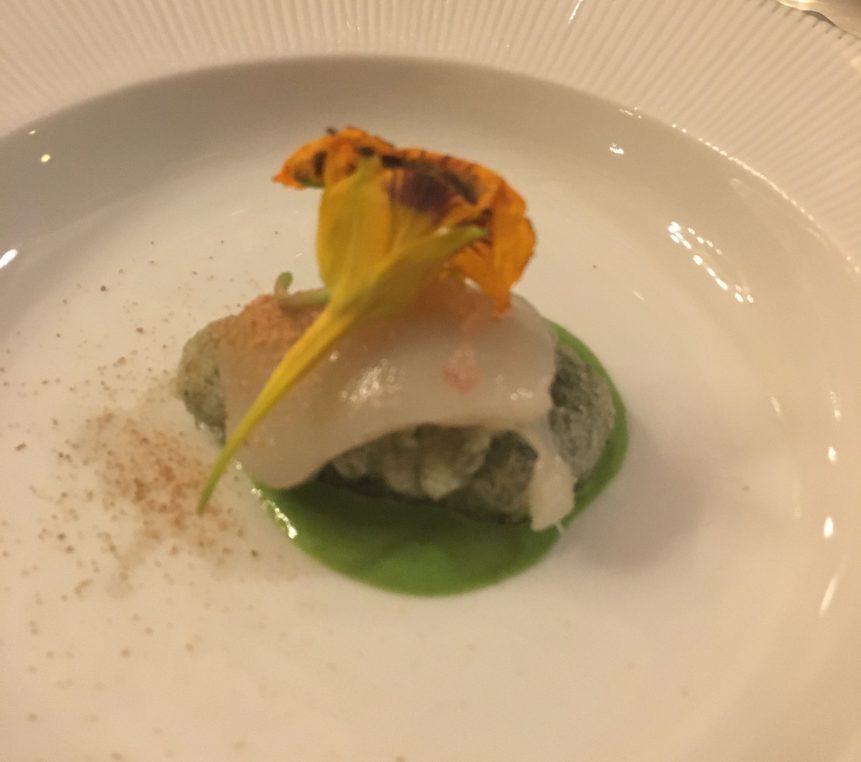 Suddenly, a huge tray of cheeses was rolled to us, old style, and we declined but should have accepted because it would have lengthened the time we spent in this paradise. So we knew now that dessert was coming and we were first brought a tall glass  with green sherbet and three whitish sherbets and creams. One of which consisted of yogurt sherbet, meringue and vanilla cream below. This all white dessert was actually full of different tastes and substances. Fascinating!

And then, when we thought it was over, a chocolate round puff arrived: and when you put a spoon of it in your mouth it melted… Instead of being a heavy chocolate fondant, it was the idea of chocolate that you tasted. Probably one of those new techniques where azote replaces food…But it was fun. 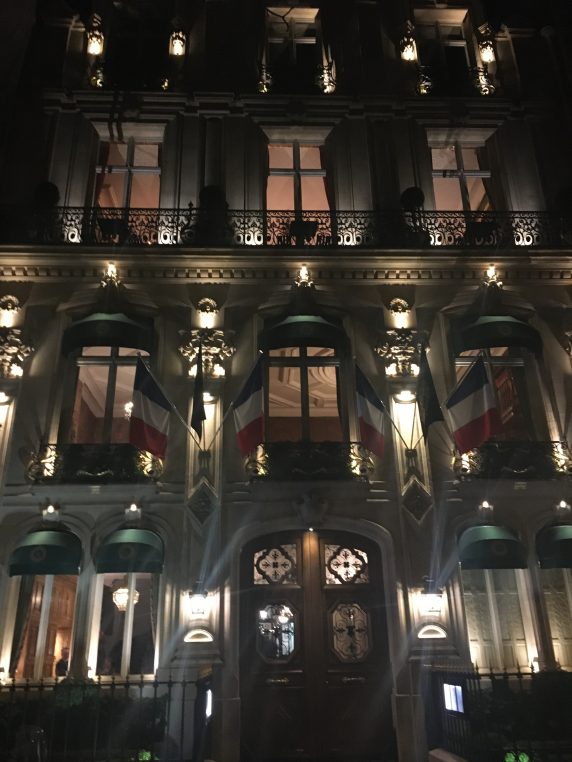 The house was built by a successful German ophtalmologist in 1880

We did not have armagnac on top because we felt so happy, we needed nothing more and just walked down the steps to the street. The staff make you feel to the end that you are royalty. They were probably trained by Prince Robert himself.

Le Clarence, 31 avenue Franklin Roosevelt. Menus from 90€ for lunch, 130€, 190€ and 320€ for dinner. there is a wine cellar on the ground floor where you find mostly the Clarence Dillon wines.