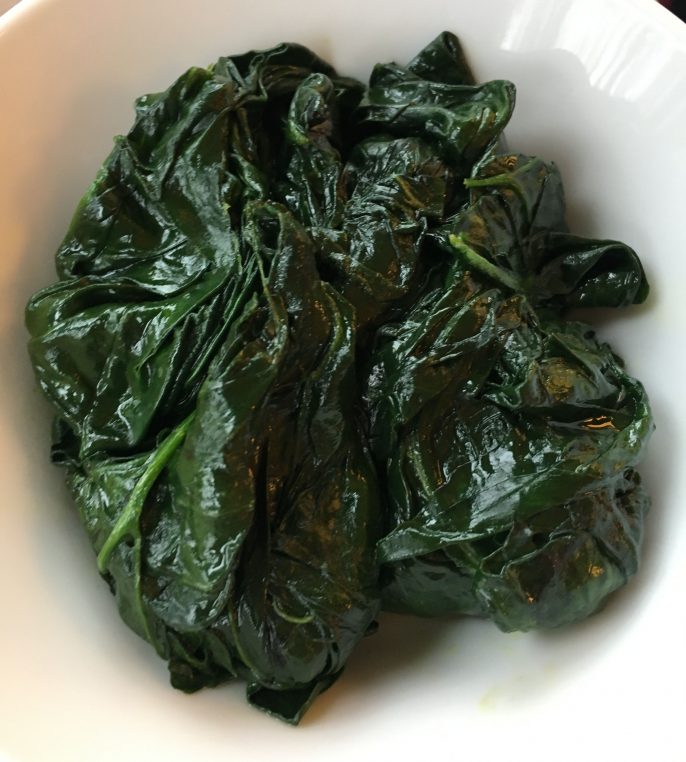 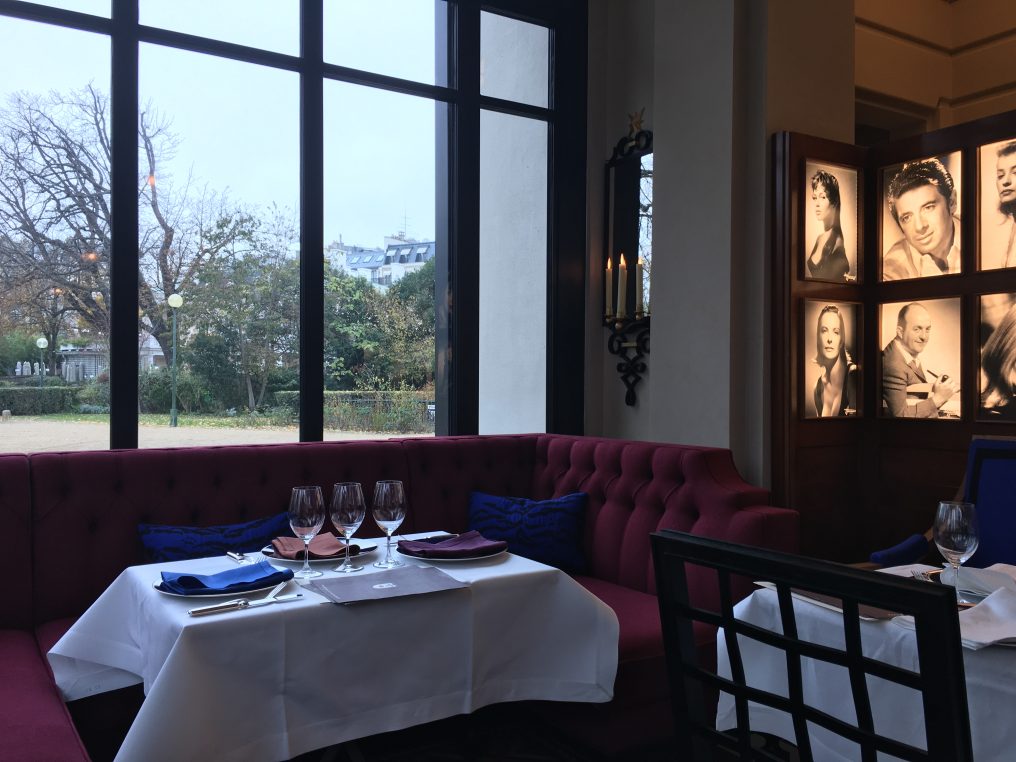 Théâtre Marigny has just reopened after five years of rejuvenation by his new operator, Marc Ladreit de Lacharrière and two architect-decorators, Jean-Michel Wilmotte for the public spaces and  François Joseph Graf for the “Costes” restaurant. It is a huge aesthetical success, since modernity mixes with the 19 th century style of the theatre founded by Jacques Offenbach, in 1855. Ushers are dressed by Irié, a favorite designer of director Jean Luc Choplin, formerly at Théâtre du Châtelet. The musical “Peau d’Ane” is not quite up to its film version with Catherine Deneuve, but bluntly reveals the talent of Charles Perrault in his fairy tales. And the restaurant set on the gardens of the Champs Elysées is extremely pretty. 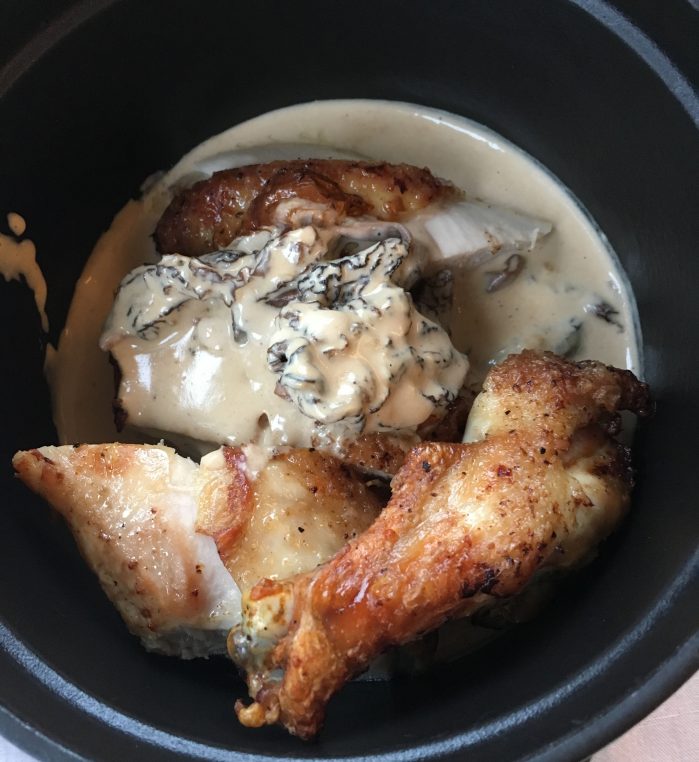 The location of the theater is unique facing the Grand Palais and the Elysées Palace and its reputation made partly by the couple of actors Madeleine Renaud–Jean Louis Barrault in the 1950’s is excellent. The restaurant is thus bound to become one of the great meeting places for dinner and lunch likewise.

It is furnished with very nice colorful chairs in purple, blue and green, the carpets designed in greek style by Graf are perfect and lit black and white photographs of famous French actors from Studio Harcourt line the alcoves. I found the two hostesses absolutely charming and beautiful. The service was excellent and I particularly appreciated the perfectly starched table cloths. 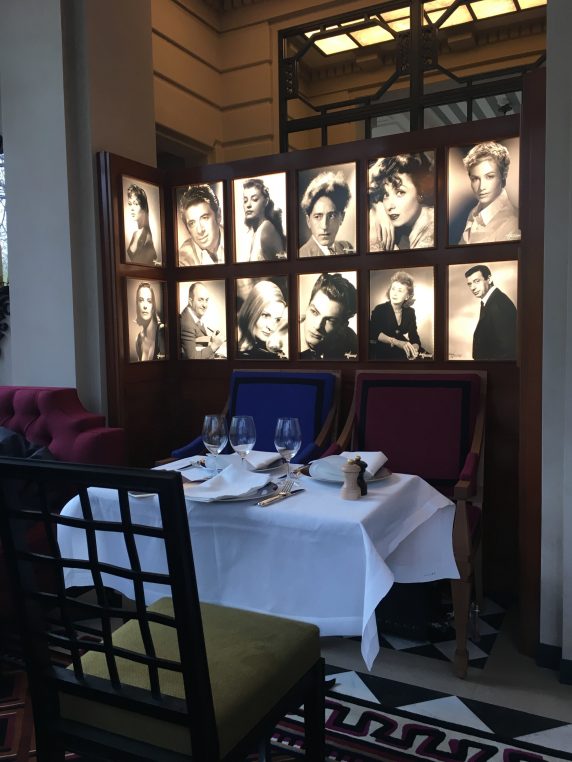 I ordered Oeufs mimosas which had too much mayonnaise but were so pretty to look at that it did not really matter and Mandarina crispy duck which was overcooked and dry, not crispy. Probably a bad choice. When I go back I might try the côte de veau de lait rôtie with ceps but at 48€, I will need to find a generous date. My Italian friend had a “Gratinée tradition”, translate soupe à l’oignon, which he did not find as good as in his remembrances of les Halles, and a cocotte de Poulet aux morilles which was good. Of course, there are never enough morilles mushrooms in the sauce… 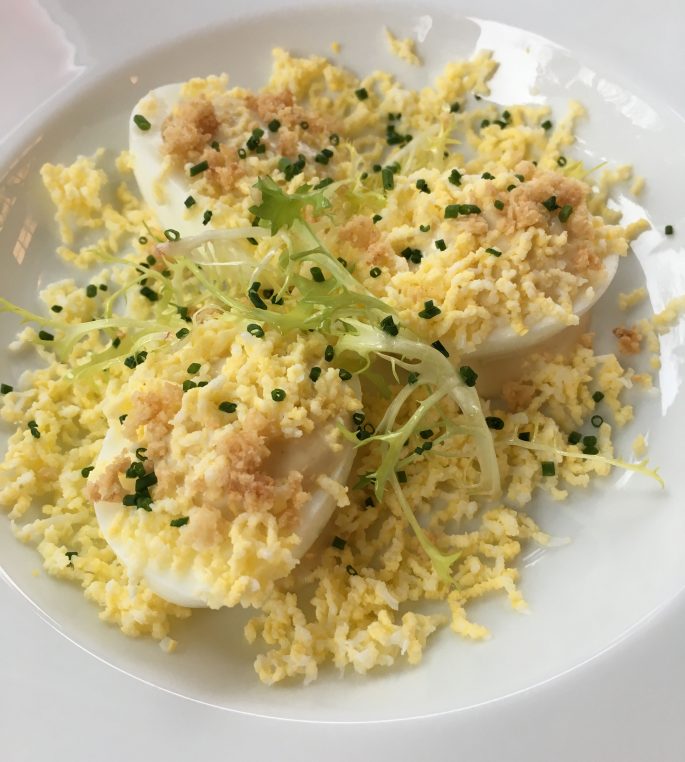 Oeufs mimosas are so pretty…

We had a few glasses of decent Morgon but could have had some Roederer champagne instead. The restaurant was not full at lunch and the grey weather of Paris seemed totally unimportant given the jolly decor of the place and the view over eh Champs Elysées.

The menu includes the usual risotto, steamed shrimps, caviar, steaks and scallops or salmon and cod. What I really enjoyed was the perfectly cooked spinach (I hear they contain vitamin B which helps in the winter months) on the side, while the potato purée was too liquid to my taste. There are also pommes allumettes (very thin French fries). 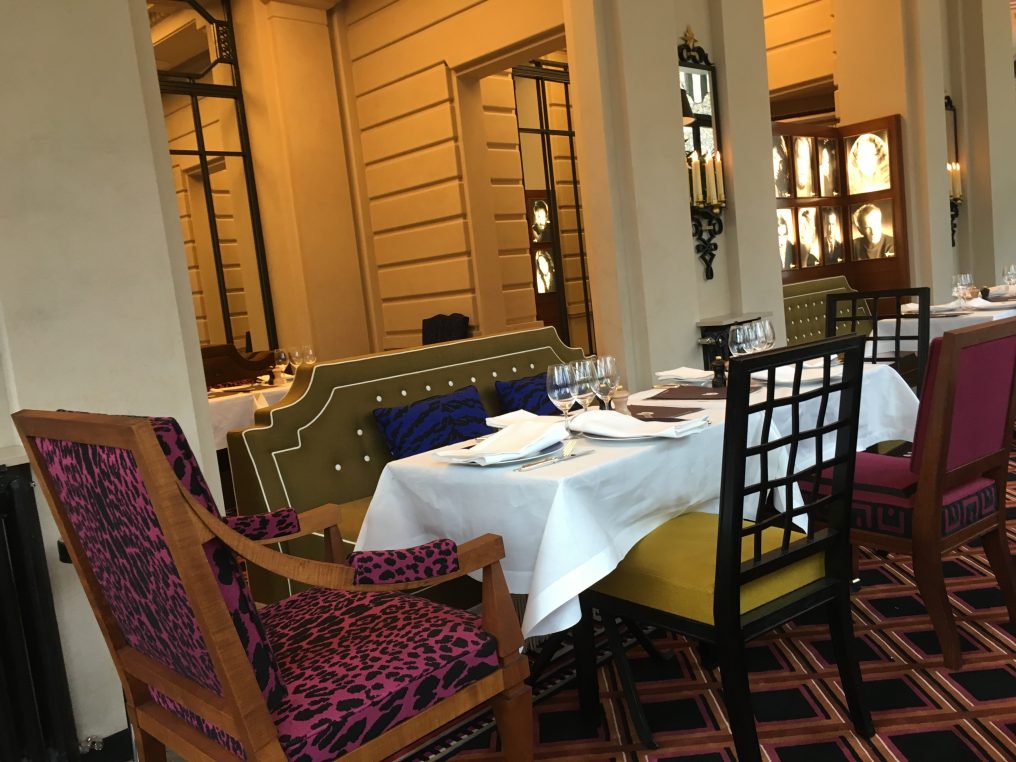 We were not tempted by dessert, gluten free chocolate cake, brioche perdue aux framboises, crème glacée vanilla minute, but might next time if they invent something more original…than apple tart. To sum up, lunch was more of an aesthetical experience than a gastronomical one. Be prepared to spend 70€ to 100€ depending on wine and you will enjoy this place enormously.