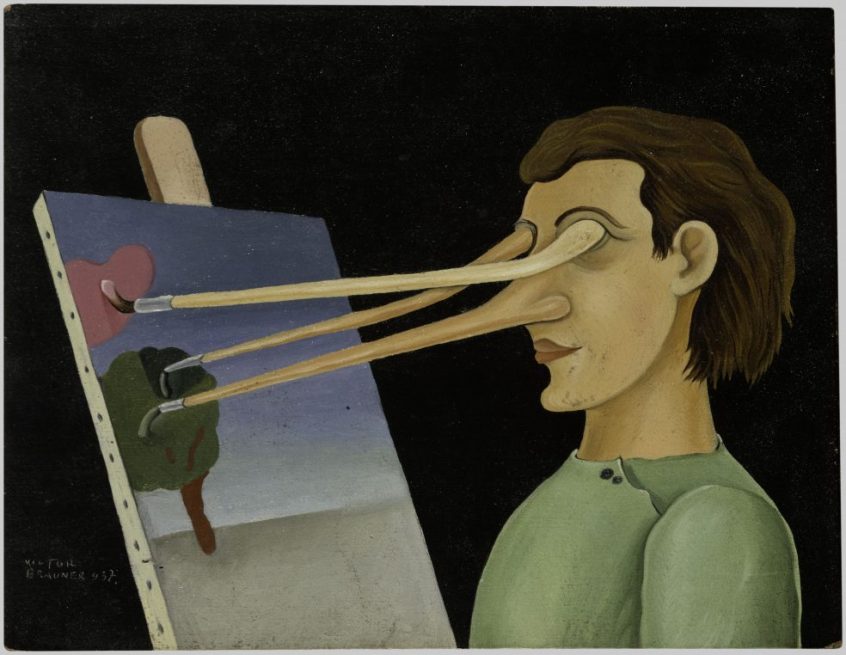 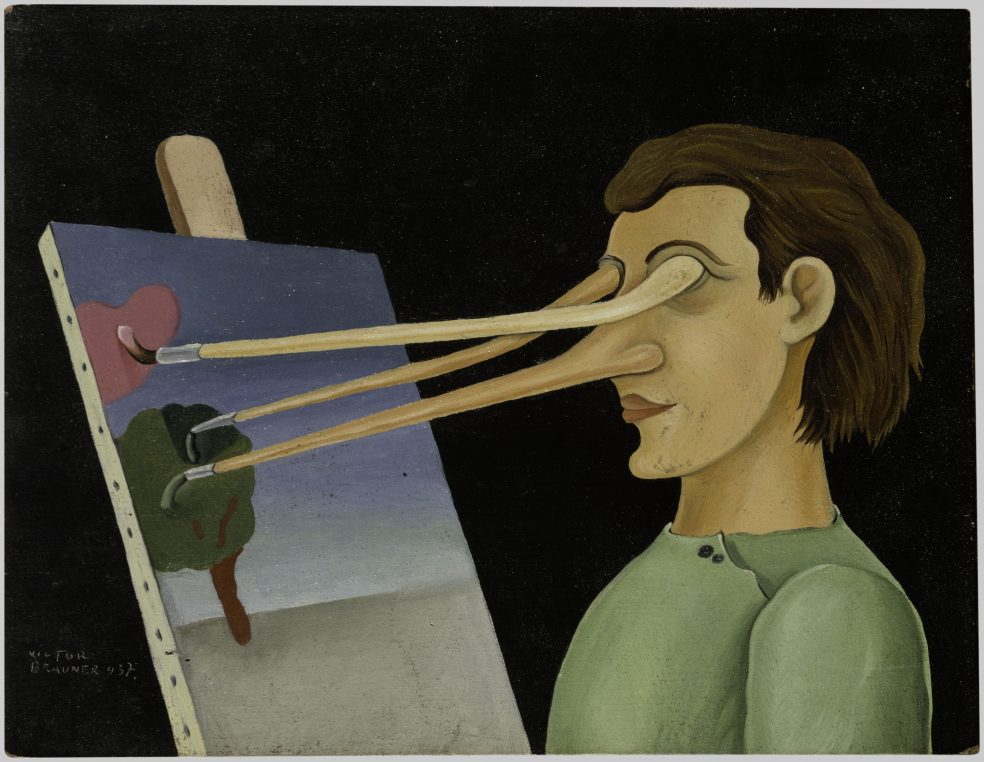 I had been waiting for these three exhibitions since April when they were due to open and strangely enough, between Sarah Moon and Victor Brauner, it is the third name, Hubert Duprat, a French contemporary self taught artist, who interested me the most. Musée d’Art Moderne de la Ville de Paris certainly has a whole day to offer the visitor with these three major artists and it is a little miracle that these shows could be organized at all.  It is the largest retrospective for the Romanian painter since Dominique Boso’s at Centre Pompidou in 1972: Brauner was a prominent actor in the surrealist movement. It is the first one for fashion photographer Sarah Moon, who shows all her creativity especially at the beginning of her career. Fabrice Hergott, the director, was happy to open his galleries to the public again and is enchanting us with this trio. 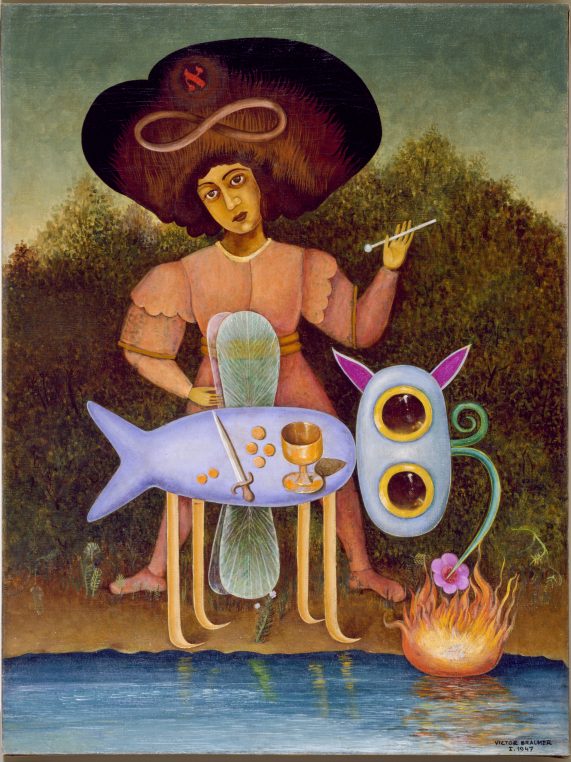 Romanian artist Victor Brauner was born in Moldavia in 1903, studied in Bucharest, and moved to Paris in the 1930’s where he joined the surrealist movement and met André Breton. His art will always reflect the darkness of History, sometimes influenced by De Chirico and Dali, as is obvious here. He has remained fairly obscure internationally and the three curators of he show have done an amazing job at getting loans and organizing the very large scenography with Véronique Dollfus. Fascinated since childhood by spiritualism and magic, Brauner has a poetic attitude to art and the different topics he approaches, whether erotic or political, always keep this dream dimension. I was very amused at the beginning by his four drawings of le Soutien-gorge dit “Le Boumerangue” (boomerang bra), corset to carry a lover, or sodomic corset with handles ca 1934. 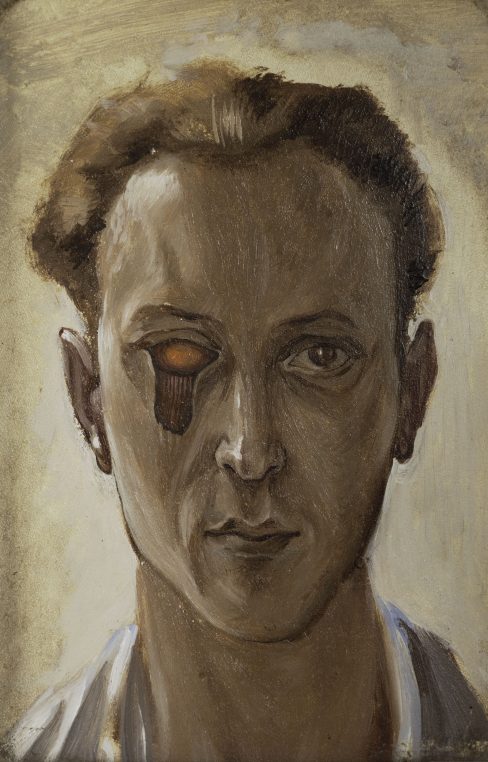 Photographer Sarah Moon started as a  model in the 1960’s and is well known in France for her advertising campaigns for Cacharel including films, five of which are shown here. Robert Delpire who encouraged her and was her companion of 48 years has a room devoted to his  publishing house. Her first photos were published in l’Express magazine in 1967 and she developed a very orignal career, with blurry pictures in black and white and color… There are many of her works which were shot for Japanese designers Yohji Yamamoto and Issey Miyake. She used polaroids and often kept their defects. 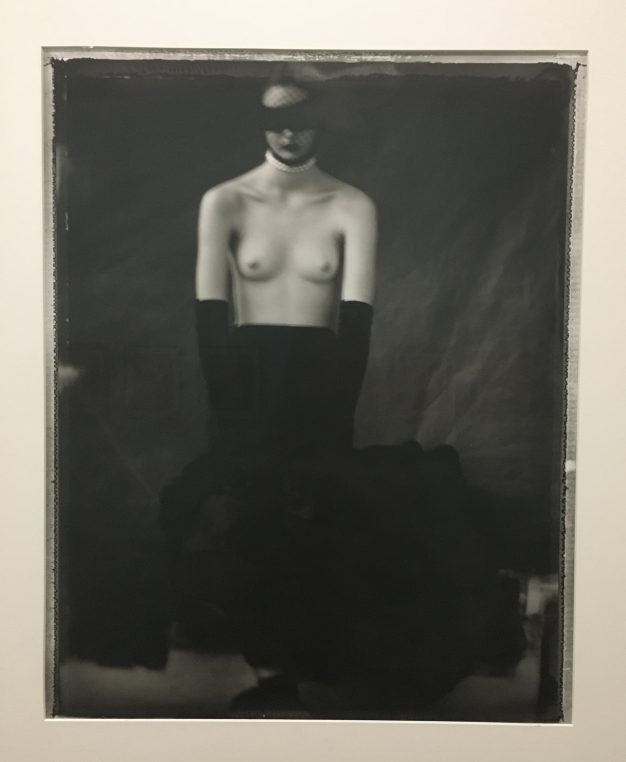 When she speaks of fashion, Sarah Moon says that what interested her the most was the person wearing the fashion and since she often worked with friends, models and designers, she could easily identify with them. I was slightly disappointed by this show which is dark and cold but some of her more futuristic shots are beautiful. 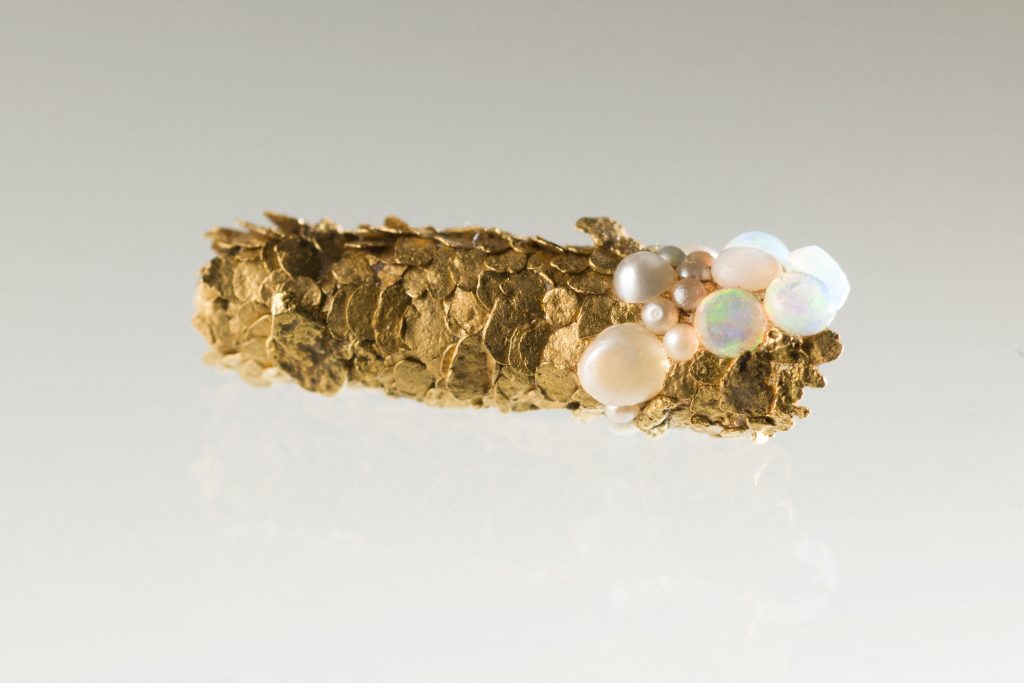 Upstairs, Hubert Duprat is a surprising artist who mixes wall installations with precious rock crystals, wood marquetry with amber, coral and artificial materials. This is his firs retrospective and the large galleries are perfect for meandering in his poetic universe. His passion goes to Trichoptera (caddisfly) larvae, an insect which builds a cocoon. A spectacular wall is incrusted with copper threads in the plaster, the work is called “Entrelacs”.  In the same room, an untitled piece is made of different plated wood curbs painted with china ink. It is close to a beautiful carpenter’s job, looks like a drape from afar, but has the serenity of a work of art. 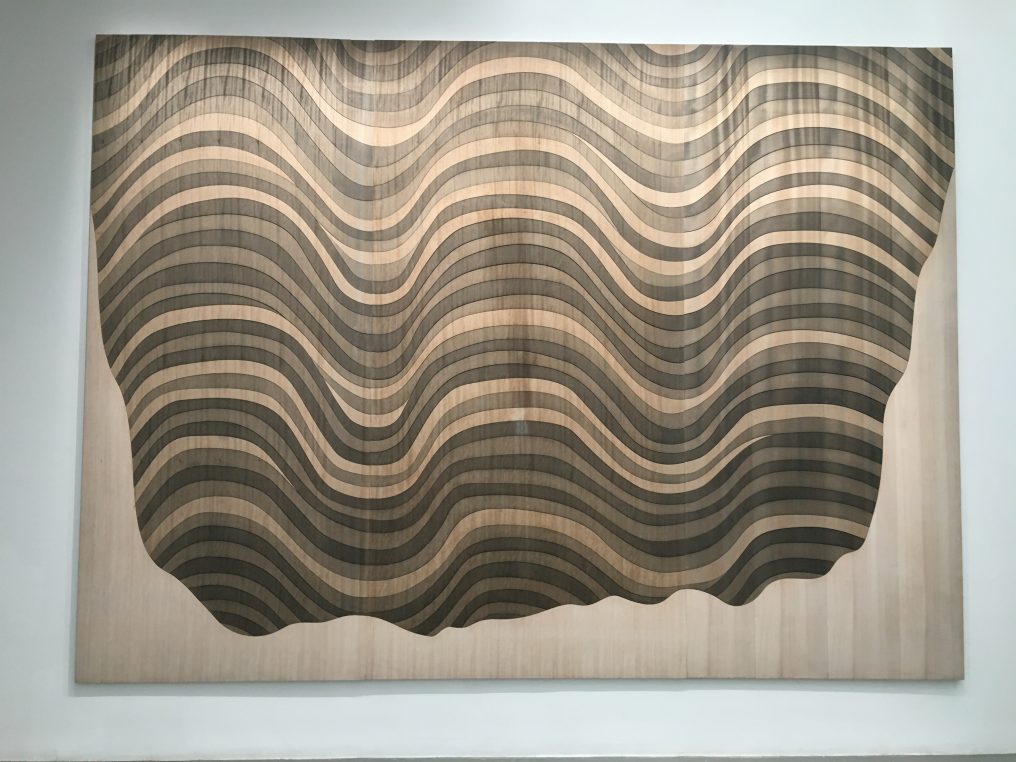 Duprat uses many different materials natural or manufactured, with mineral or vegetable characteristics, and some industrial. The first sculpture in the show is made of long pieces of beech tree covered in golden nails. It’s beautiful. His series of smaller objects in Optical calcite cristal, pink rock cristal with paraffine (lent by Antoine de Galbert) or coral Costa Brava, are really what I would love to have at home. The Friends of the museum acquired a whole collection of them. 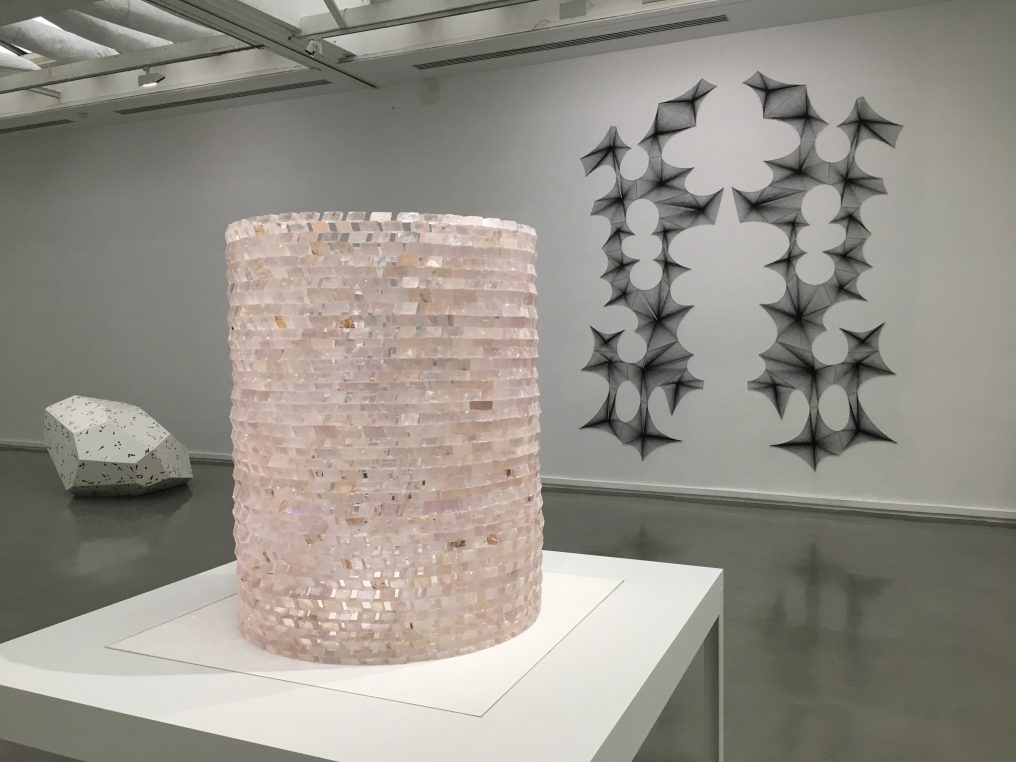 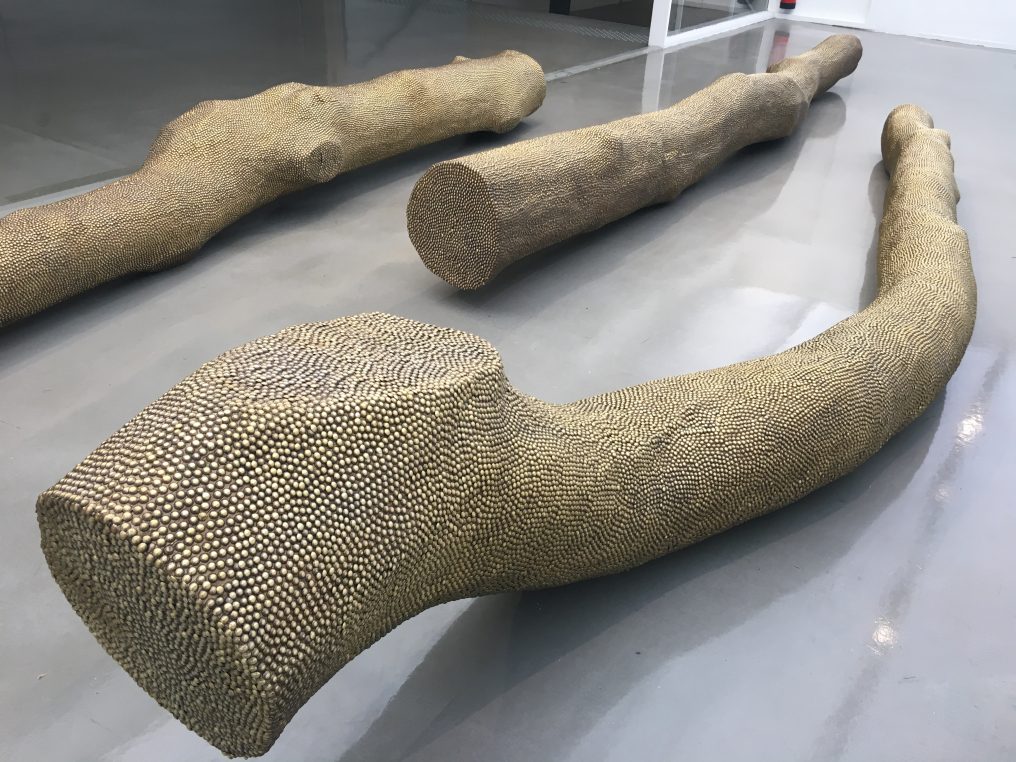 A few films show how he works with his assistants to install a plastered wall, another piece, the Tribulum, is made of moss and silex and gives an optical illusion in green and pink. The whole show  is happy and full of discoveries for the inquisitive mind. This 63 year old artist who cultivates discretion, is very surprising and one can go to his gallery Art:Concept to discover more about him.