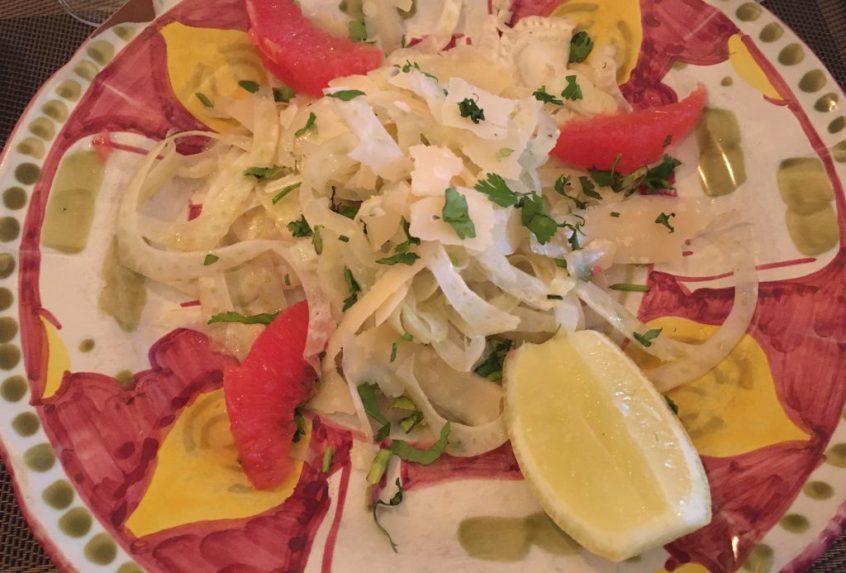 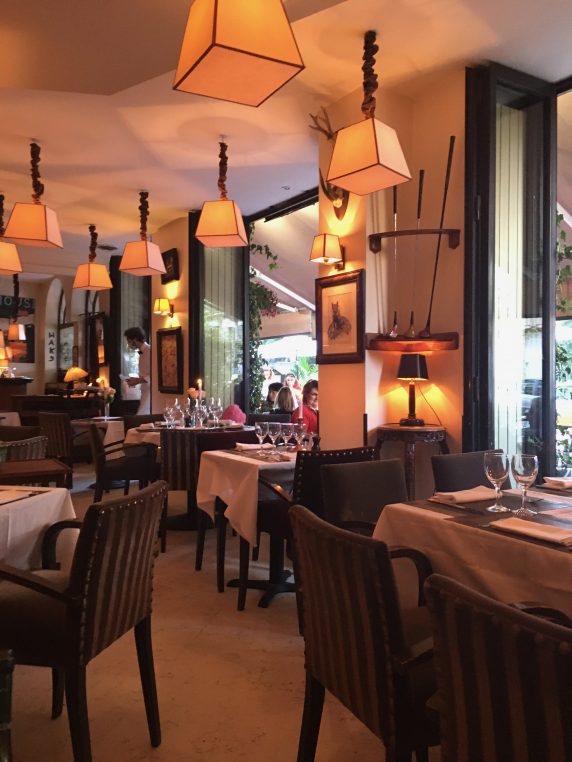 Waknine is the hot spot near Galliera

The first day restaurants opened I went out for lunch and dinner and I already have an overdose of mediocre food, noisy neighbors and drafts. Our confinement dinners were so cozy and perfectly planned!  Thank God, movie theaters are reopening and some music events like the 40 th piano festival at La Roque d’Anthéron in August and Sir William Christie‘s garden festival in Charente, are taking place. There is great need for courage and determination at the moment among cultural institutions, to keep projects going because musicians, singers, dancers and actors need to work. 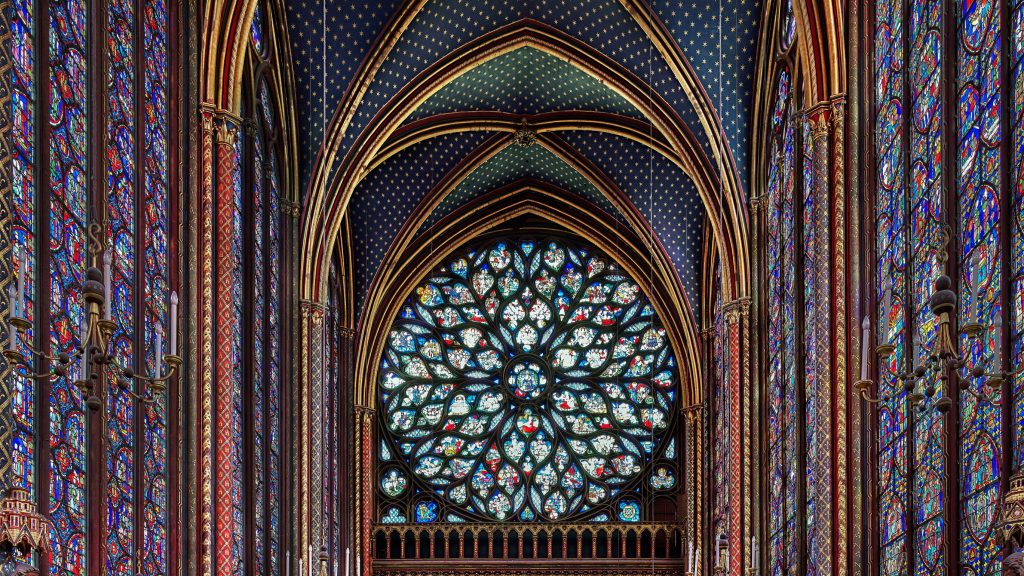 There were only 5 000 visitors on the first day to the  Eiffel Tower which you have to climb by foot, and 90 people are allowed at the same time at the Sainte Chapelle, but most museums have opened and you just need to book a time for health reasons. I am definitely going to the Louvre on Monday the 6 th at the opening.

Cinemas started last Monday and my first movie was Mr Just (in French, l’Ombre de Staline) which many of you have already seen in the US on Amazon and loved. It came out in London in February and was due out in the States on April 6. It is the story of Gareth Jones an ambitious journalist from Wales who speaks fluent Russian and decides to go to Moscow in 1933 to interview Stalin. He has interviewed Hitler previously and works for Lloyd George. He unveils the scandal of the Holodomor famine in the Ukraine which killed 4 million peasants and witnesses children eating their dead brother. His article inspired George Orwell for his book “Animal farm”.

With the disastrous news that the Paris Opera was close to bankruptcy and would not start its season until Christmas, and that its President Stéphane Lisser had deserted the sinking ship for Teatro San Carlo in Naples, one had to make up for it with a good dinner. What will happen to the Paris ballet which is one of the finest in the world? And shall we ever again enjoy Palais Garnier’s pristine decors? 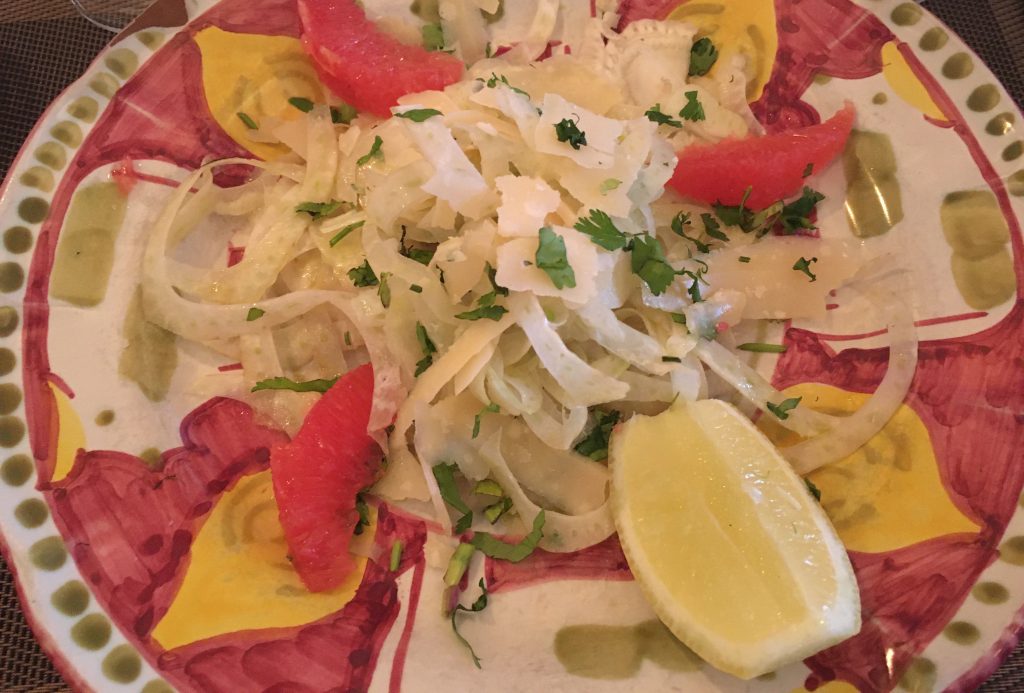 A very pretty fenil salad with grapefruit at Waknine

I was invited at Waknine, a popular (if it’s not antinomic) 16 th arrondissement brasserie, across from Palais Galliera, where the young crowds stayed outside and we could enjoy a quite moment inside. I particularly liked the fenil salad with a little grapefruit but thought the vitello al limone was insipid. Yet it was the right thing to do on that day. June is busy even though most Parisians have stayed in the country and timid dinner parties are starting. Everyone opens their gardens and it seems that Prosecco and Aperol cocktails are still in fashion. 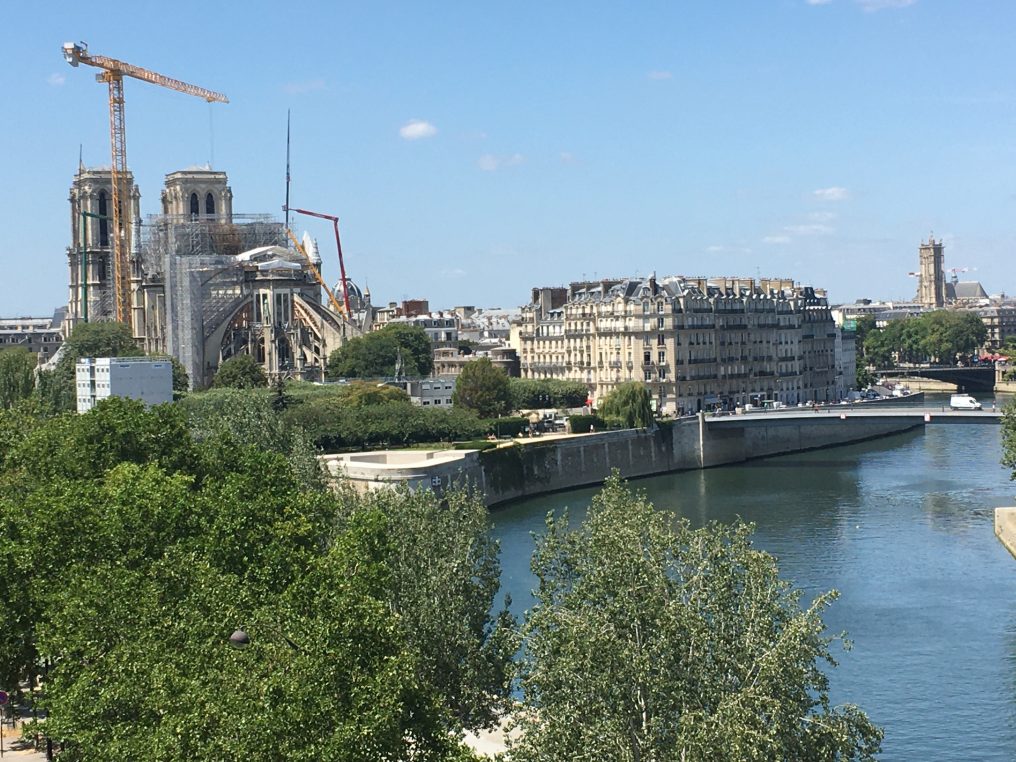 The scaffoldings of Notre Dame are slowly being taken down

The elections have comforted Anne Hidalgo as mayor of Paris with 49% of votes, which is the only real catastrophy of the week. She has closed off rue de Rivoli to all cars except taxis and has created dangerous cycle lanes with little parapets, all over the Champs Elysées. Part of the Bastille Opera bankruptcy is due to the fact that its well-to-do subscribers cannot reach it anymore from the Trocadero whether by car or taxi since she closed the fast lane along the Seine. Thank goodness Edouard Philippe, our Prime minister was elected in Le Havre with a large majority.

Jean Jacques Annaud is preparing a new movie of “Notre Dame is burning” (April 15, 2019), which the director will start filming in December. He wrote the script in confinement. When he filmed Umberto Ecco’s book, The name of the Rose in 1986, he visited 328 monasteries; for this project, he goes to all the main cathedrals in France. 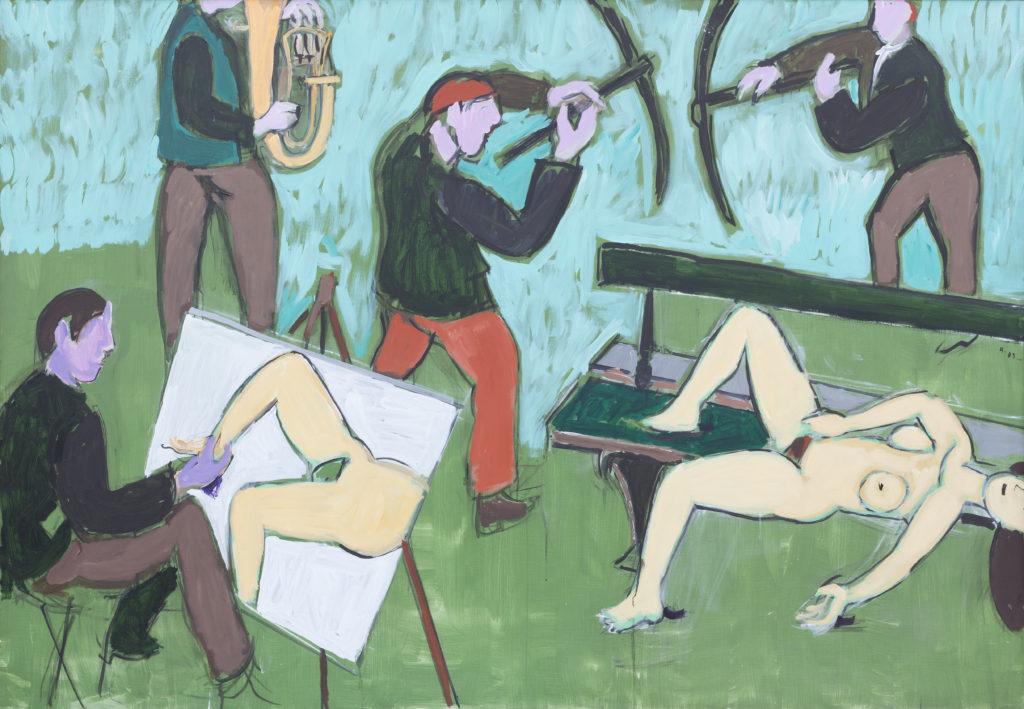 I had a fabulous lunch at galerist Alain Margaron‘s private apartment just below Tour d’Argent. He bought part of Daniel Cordier‘s collection of 1950’s paintings and his walls are hung with René Laubiès, Bernard Réquichot and Jean Helion: the view is vertiginous overlooking Ile Saint Louis and Notre Dame of course. It is one of the most beautiful spots in Paris. The gallery in the Marais has a show of his different artists until the July 25. 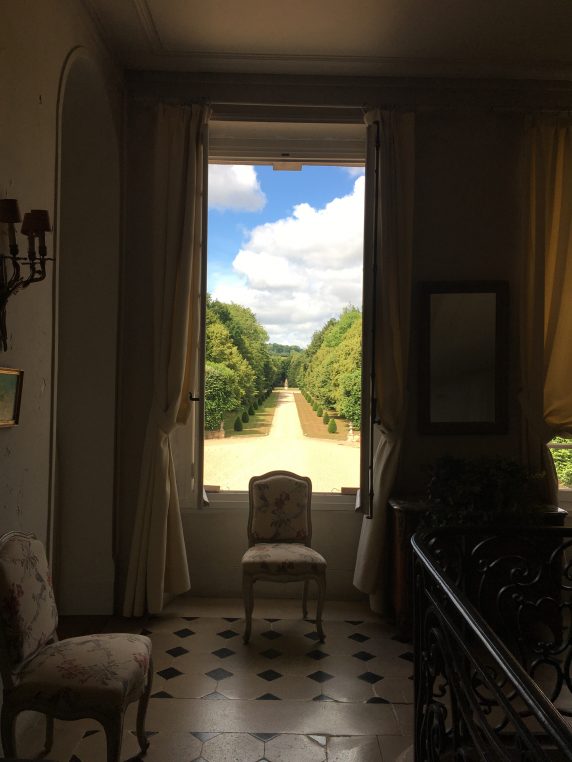 A view of the “Remarkable garden” at Fontaine la Soret

And my first week end was spent in Normandy with a delightful wedding near Veules les Roses and a night over at a “Remarkable garden“, a brand name for beautiful and interesting parks created in 2004.  Picking from their list of gardens is a nice way to visit an area and they have a great map. In Fontaine La Soret, the garden filled with little fountains and springs, was designed in 1960 by British gardener Russell Page and redeveloped recently by Louis Benech, who worked closely with Irène et Bertrand Chardon, the owners. It opens from July 20 to the end of August. 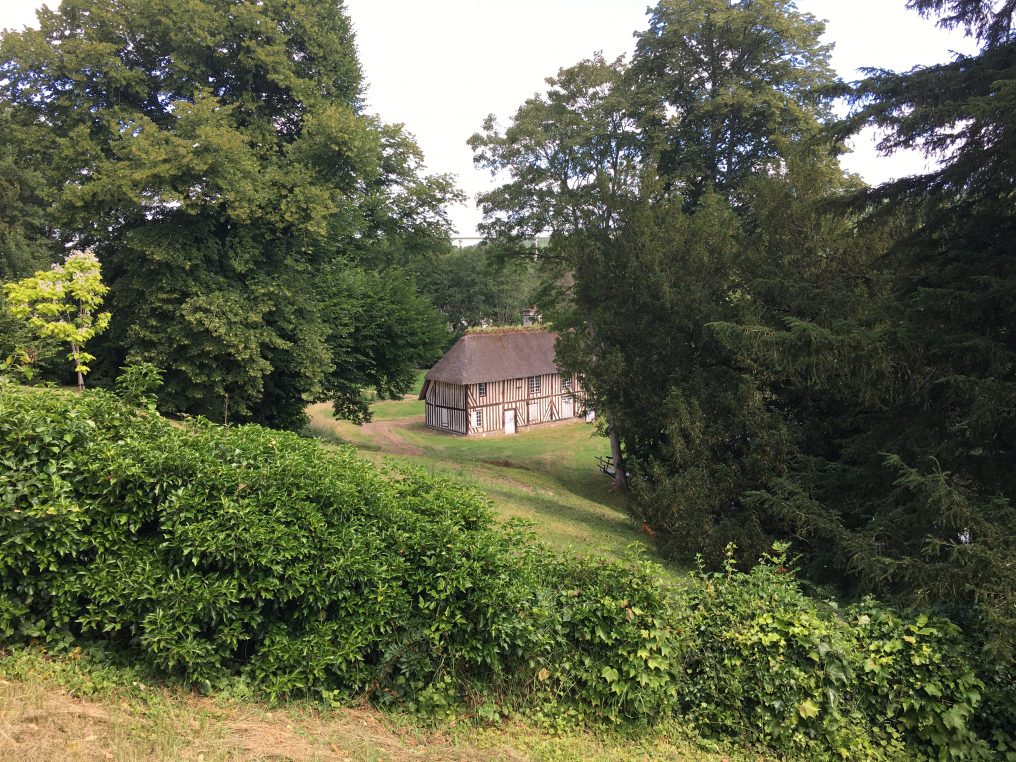 Everyone is rediscovering France this year and driving around the “bocage normand” is a delight. Blue linen fields and rainbows enliven the countryside.

2 Comments on “My first movie, my first museum, my first restaurant …”