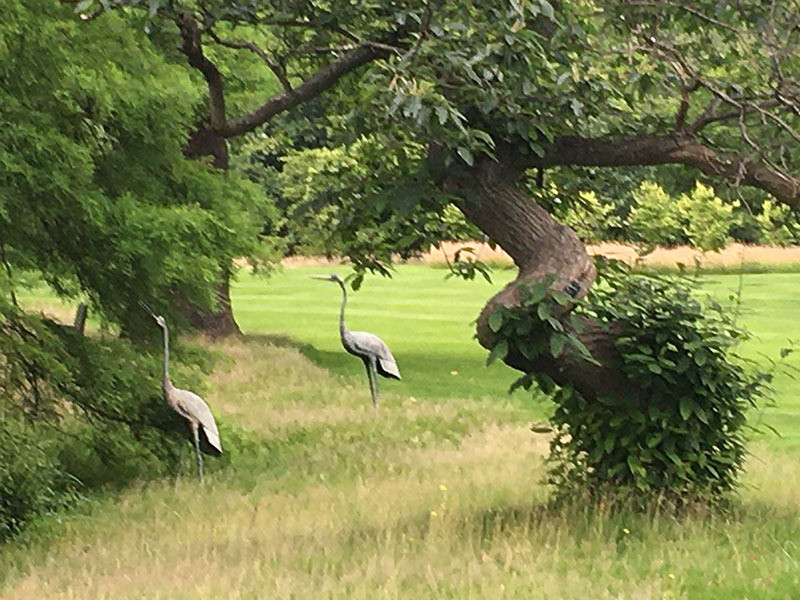 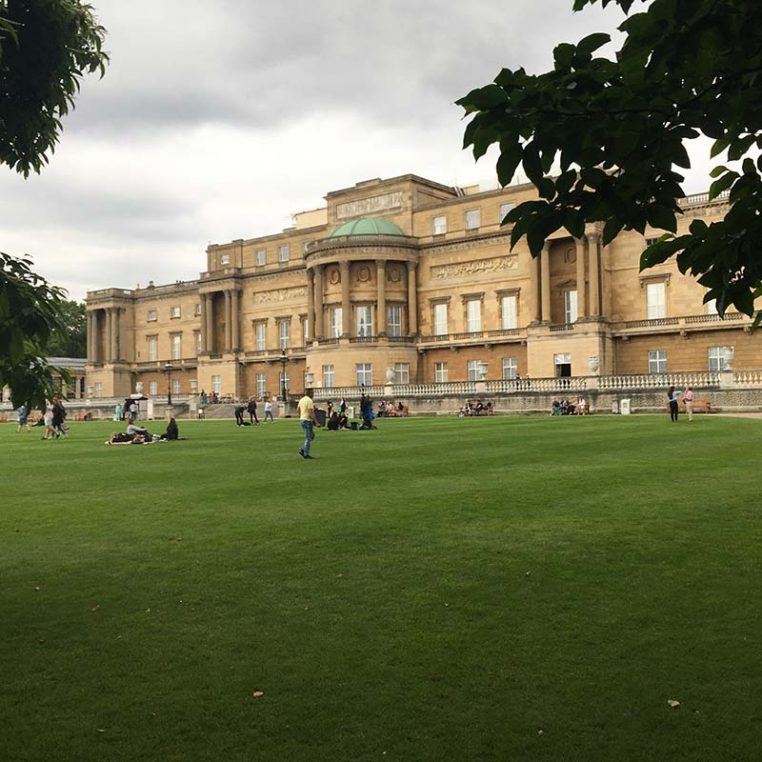 In celebration of the easing of lockdown, the Royal Collection Trust has been reopening its royal residences to the public. Although thousands of people visit the Buckingham Palace State Rooms and gardens every non-pandemic year, lingering and picnicking are a no-no. This year it’s different. There may be no royal garden parties, but the garden at Buckingham Palace is open to the public for the first time in history. You can walk on the grass, bring your own picnic (no alcohol, knives or dogs are allowed), or enjoy a cup of tea with cake or a scone bought from the lawnside café. My dear friend Georgia de Chamberet, an Anglo-French editor, translator and writer in London was one of the first visitors to the gardens. She was kind enough to share her visit with us and here it is.

Cranes gifted to the Queen by the Emperor of Japan, photo Georgia de Chamberet

“As I’m enjoying a staycation, and having fun being a tourist in London – where I’ve lived for much of my life – I booked two tickets priced £16.50 each, and went visiting with a friend the day after the gardens opened. Access to the rose garden, wildflower meadow, waterfall, walled gardens and the Waterloo urn require a further pre-booked guided tour ticket.

We entered through a door in the wall that runs along  the back of Buckingham Palace, went past  the indoor riding ring to one side of the stables – which can house up to seventy horses – and skirted a shrubbery that opens out on to a superb view of John Nash’s long, elegant garden side of the palace. 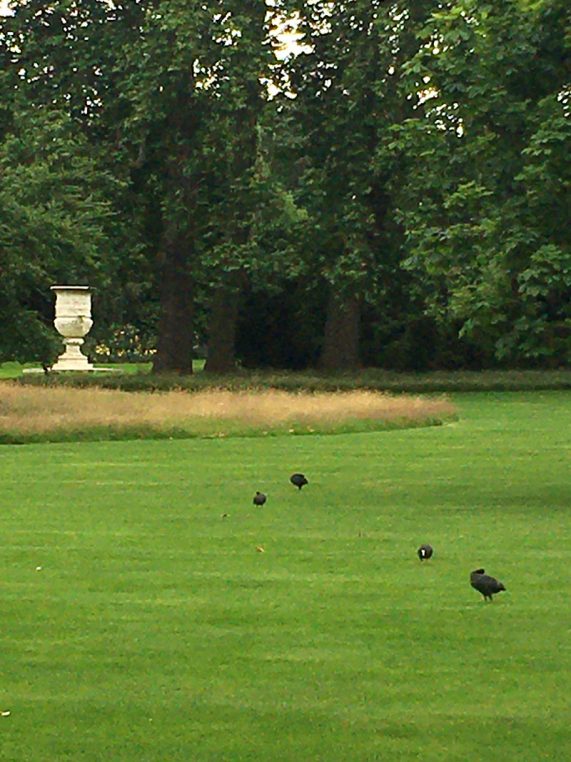 The central semi-circular bay is topped by a corresponding dome. Graceful urns decorate the terrace overlooking a vast camomile lawn which sweeps down to a four-acre serpentine lake with two bridges and an island.

I pictured in my mind’s eye the Queen walking her corgis; conservationist Prince Charles assessing the trees; or going back in time, the poet Dryden in the Mulberry Garden to the north of today’s fragrant herbaceous border, where he “ate tarts with Mrs. Anne Reeve, his mistress. The company sat in arbours, and were regaled with cheesecakes, syllabubs, and sweetened wine; wine-and-water at dinner, and a dish of tea afterwards. Sometimes the ladies wore masks.” 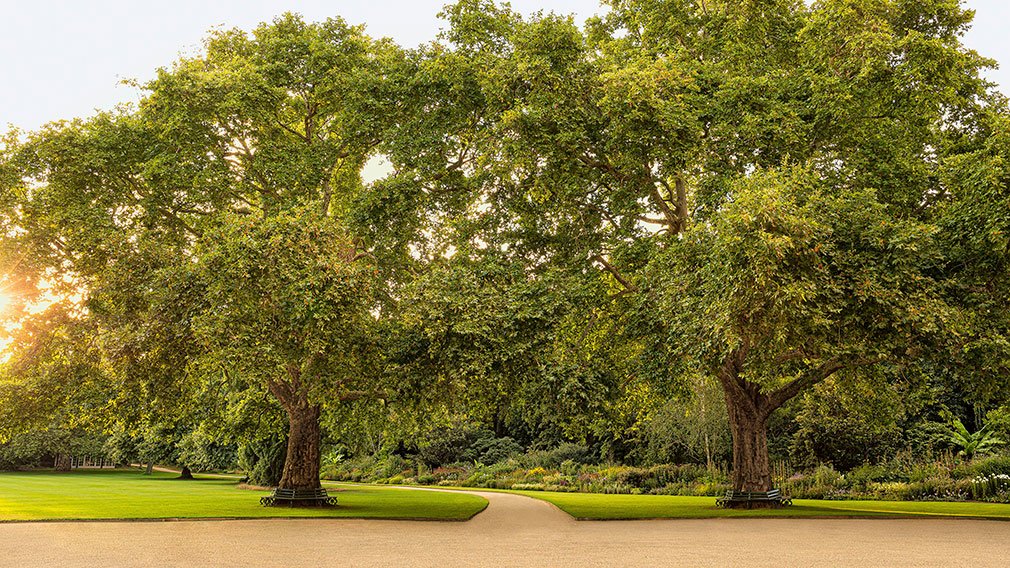 Known as Victoria and Albert, the garden’s two most famous plane trees were planted by the Queen and her consort more than 150 years ago. Photographer: John Campbell ©

A fun Trivial Pursuit type discovery is that in 1666, very probably “the first cup of tea made in England was drunk on the site of Buckingham Palace.” (Sharpe’s London Magazine of Entertainment and Instruction, Volume 3, January 1847)

The site has royal connections stretching back to Tudor times, but it was not until 1761 when Buckingham House at the end of the Mall was acquired by King George III, that it became a royal residence. He gifted it to Queen Charlotte and the palace became known as the Queen’s House.

The late Lady Edna Healey, wife of former Labour chancellor Lord Denis Healey, writes in her informative book, The Queen’s House: A Social History of Buckingham Palace, “He wanted a new home away from his official residence. Buckingham House he hoped would be his ‘rus in urbe’ where he could live the life he really wanted – that of a cultured gentleman with books, paintings, music and gardens amid a large happy family.” 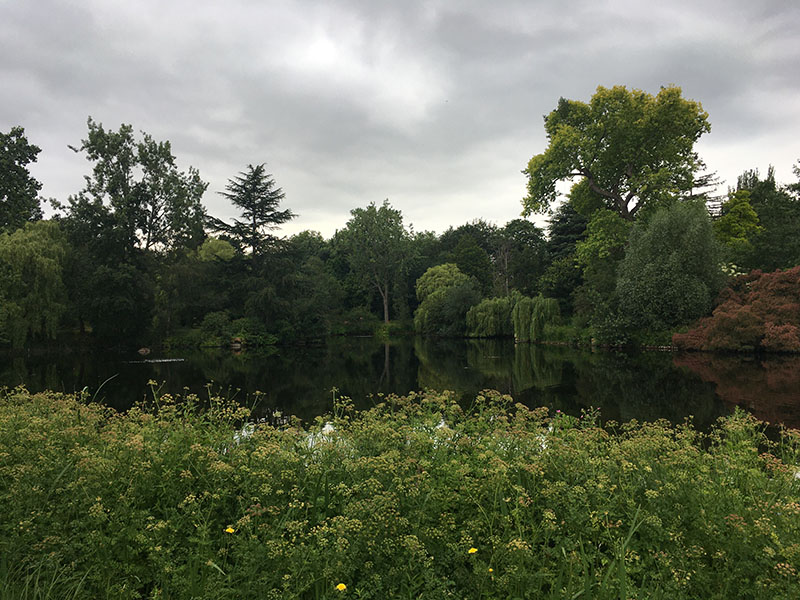 A Haven of Biodiversity

The gardens form a thirty-nine-acre oasis with over two miles of gravel paths, 325 wild-plant species, thirty species of breeding birds, and over 1,000 trees, including ninety-eight London planes and eighty-five different species of oak. The intoxicating aroma of lime trees in flower fills the lakeside air.

The Queen planted a curved avenue of Indian horse chestnut trees in 1961. More recently, with her head gardener, Mark Lane, she introduced the wildflower meadow and a deliciously-scented 175-yard-long herbaceous border replacing a sea of tulips. Since 1992, a seasonal posy is made from the garden’s blooms and presented to the Queen every Monday when she is in residence. 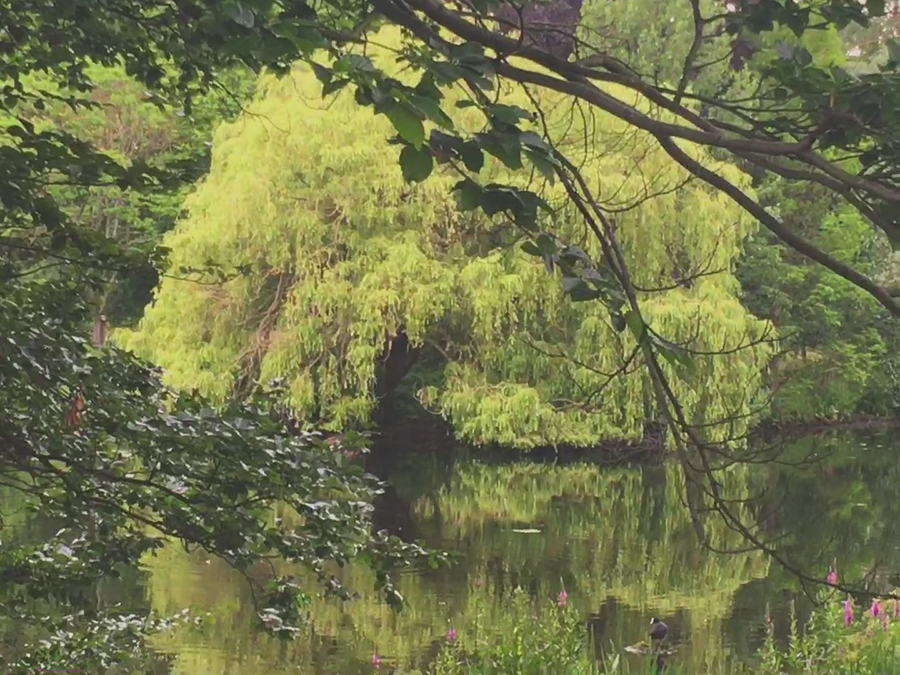 A view for romantics: the weeping willow on the island of the lake, photo Georgia de Chamberet

In May this year, Prince Charles urged people to “plant a tree for the jubilee” to mark the Queen’s seventy-year reign. The Queen’s Green Canopy scheme has been launched to encourage people to plant trees from the start of the tree-planting season in October 2021 through to the end of 2022.

The lake has been left untouched for more than a century. Wild, shady and overgrown, it is perfect for nesting birds, as well as bees. The Waterloo vase on the lawn is a memento from George IV’s reign. It is fifteen feet high, and was carved by Richard Westmacott from a large piece of Cararra marble, presented by the Duke of Tuscany to the King when he was Prince Regent, in gratitude for British support during the Napoleonic wars.” 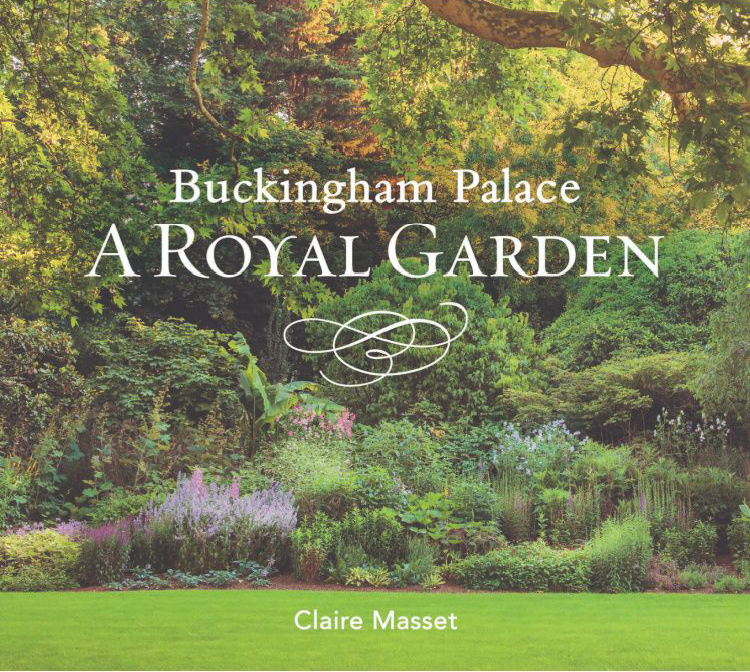 After one of the grimmest years ever, there is something immensely healing about visiting a verdant oasis of relaxed royal privilege at the heart of a heaving capital city. We returned to the real world, refreshed and restored.

Buckingham Palace: A Royal Garden by Claire Masset includes contributions from the palace’s head gardener, Mark Lane, who reveals some of the methods he has used to increase biodiversity and restore delicate ecosystems. It follows a year in the life of the royal garden.

Georgia de Chamberet is an Anglo-French editor, translator and writer who has worked in book publishing for nearly thirty years. She founded BookBlast® Ltd in 1997 and the first website was launched in 2000. She is a former committee member of English PEN’s Writers in Translation programme, and manages various literary estates, including that of her godmother, Lesley Blanch. She lives in West London.