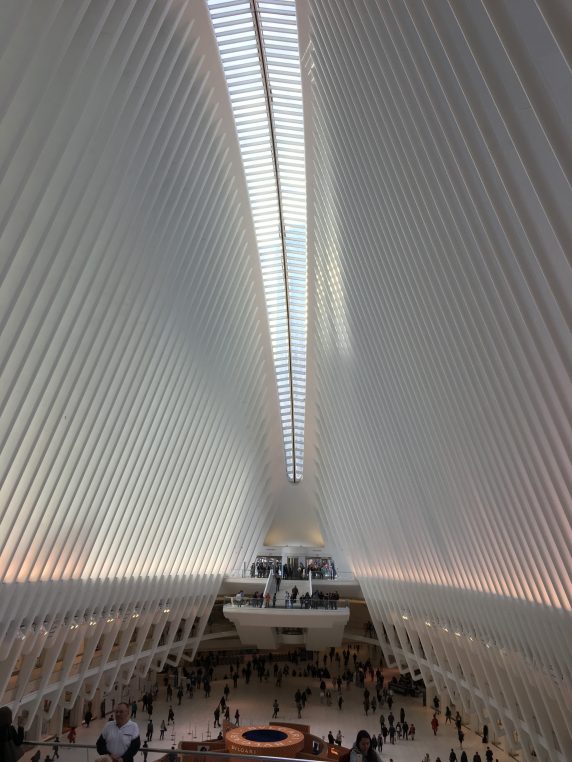 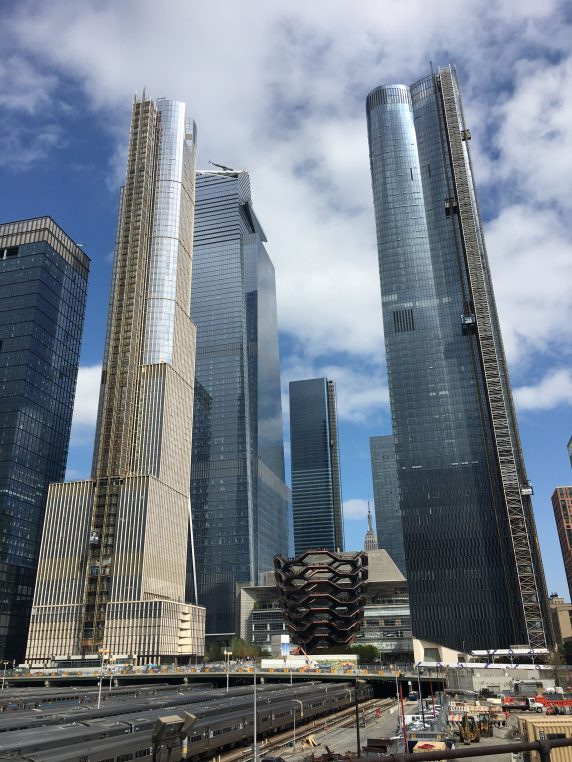 I had not been to New York for three years and I found lots of changes. First the Hudson Yards, a new business/shopping/living area at the start of the Highline on 30 th st and the Hudson, attracted me because I wanted to see the Vessel. This large pile of staircases in red copper was much talked about and I could not believe how ugly it is, and completely out of proportion with the rest of the development. Thank God, this was the only disappointment of my trip which included meeting Graydon Carter and Alessandra Stanley who are launching a new e.magazine in July, AirMail News, discovering the new imprint HarperVia, dedicated to novels in translation at Harper Collins and hearing all about Woody Allen’s new film in a second avenue Italian restaurant. 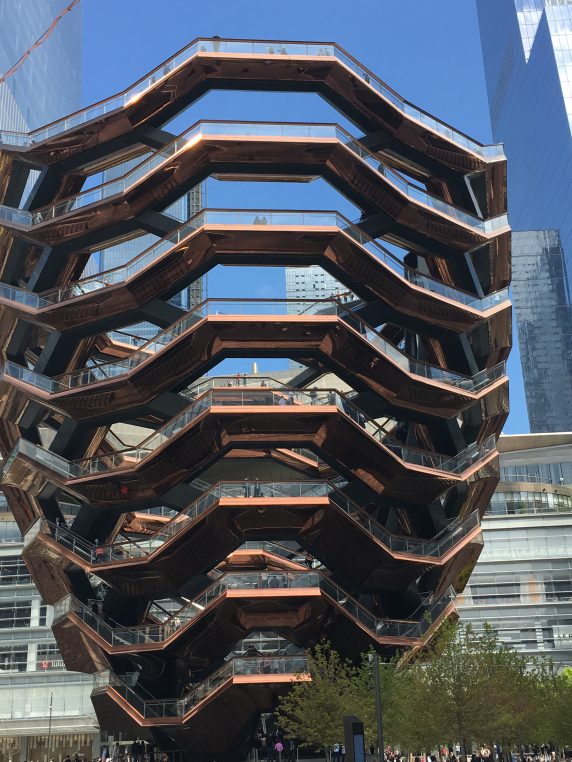 I was very disappointed by the ugliness of the Vessel and also by the mediocre Daniel Buren installation of flags on the end of the Highline, which has become over the years, a popular tourist trap. But I was very happy to walk downtown, my eyes turned to the sky in order to discover all the new buildings in the city. Hudson Yards is obviously attractive even though it has no public transportations to reach it. And I was told that Black Rock and the law firm of Debevoise Plimpton have already committed to renting offices there. While the upper East side (90 th and Madison) is loosing all its retail, and Tribeca some of its tenants, this West side facility near the very trendy Chelsea, the ferry from New Jersey and Penn Station, is the upcoming place with even a Citarella shop in the mall.

While walking from the Whitney museum to the Brooklyn Bridge I fell upon the fascinating new transit station designed by Santiago Calatrava for the World Trade Center in the Oculus building. What a reward it is to commute from New Jersey and arrive in this white cathedral designed by the Valencia born Spanish architect, who specializes in bridges and train stations. The “wings of a large bird” embrace travelers and visitors alike. The whole area has resurrected with publishers moving downtown (Condé Nast) and I loved seeing the Harper Collins offices which are becoming more and more International with offices around the world. With the announcement in March, of a new imprint called HarperVia concentrating on exceptional storytelling by foreign writers, the collection run by Judith Curr with Juan Mila, Tara Parsons and Alice Min, will publish its first books in October. 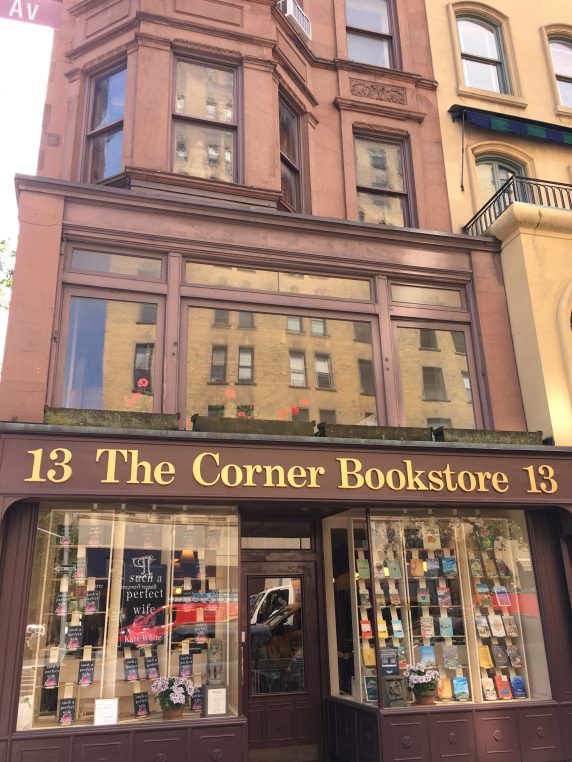 The Corner Bookstore, one of the last independent bookstore on Madison and 92 nd

At a time when there are hardly any bookstores left even in Manhattan, creating a new interest in foreign fiction is a great event and one of the first books to come out will be Karina Sainz Borgo‘s “It would be in Caracas” a novel about surviving in today’s Venezuela.

Speaking of daring enterprises, I was lucky to meet the very flamboyant and clever Graydon  Carter who left Vanity Fair and is launching AirMail News, the first Saturday in July at 6 am. He made me laugh when we discussed the lack of lovemaking nowadays and he mentioned the “Permission slip” a mini contract that sports teams take in their luggage when they travel and have the eventual girlfriend sign before getting into action! It has not come to France yet. 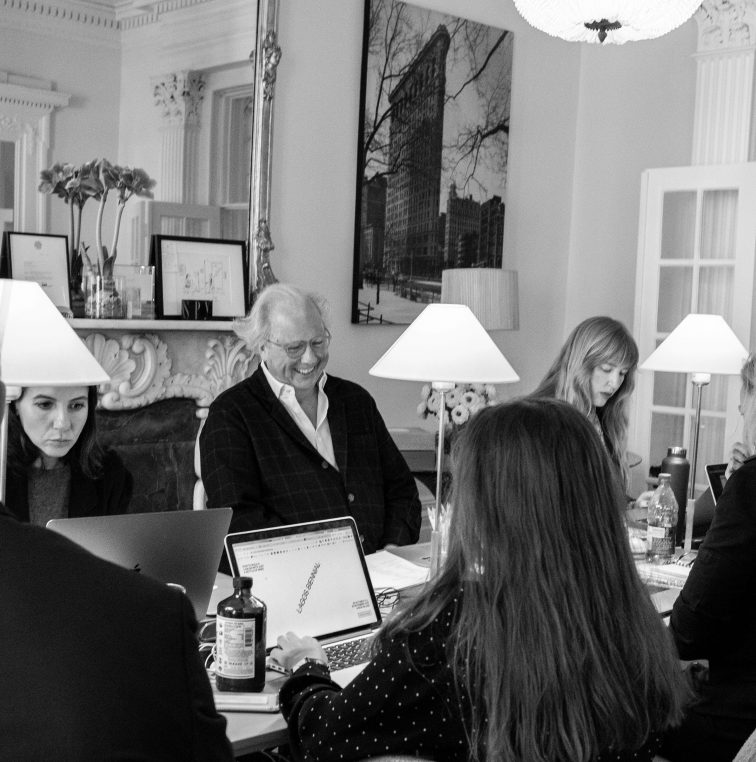 Graydon Carter with his young team in the AirMail news offices

The weekly newsletter will focus on International cultural events with a calendar of all art and music shows being published four months ahead and many photographs, restaurant addresses and vignettes on what’s hip today around the world. Knowing what Carter did at Condé Nast, this is anxiously awaited by all of us trendy readers and culture vultures.

Set in a charming townhouse in the village, their offices have the feeling of a home with a group of young eager journalists and the editor, Alessandra Stanley, who spent her career at the New York Times, offers you coffee in the garden. Quite cool for the city. You can already register to receive it since the subscription is free for the first weeks.

Air Mail News will come out every Saturday morning at 6 am New York time.

Over dinner with Soon Yi and Woody Allen in great form, we talked about the shooting of his new film in San Sebastian all summer with a jazz tour beforehand around Europe. They will, later in the summer, be in Paris promoting “A Rainy Day in New York” which is due out in Italy and France at the beginning of October.

It features French American actor, Timothy Chalamet and Selena Gomez with Jude Law and is about teen age love, a topic Woody is studying every day with his two teen age daughters who are in college. 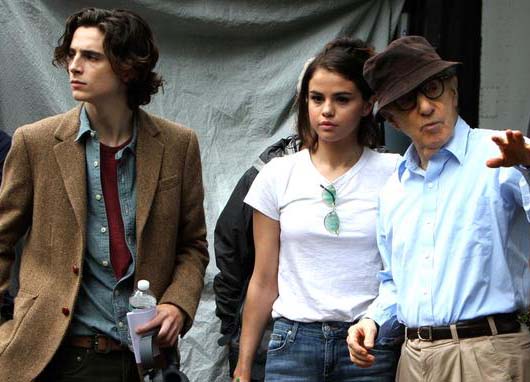 Timothée Chalamet, Selena Gomez and Woody Allen, on the set of “A Rainy Day in New York” which is coming out in the beginning of October in Europe

While browsing at the Corner Bookstore on upper Madison, I fell for George Packer‘s biography of Richard Holbrooke which is the talk of the town, Lynne Olson’s “Madame Fourcade’s secret war, on the French woman who headed the largest spy network in occupied France during WorlWar II, and photographer Rachel Cobb‘s book on “Mistral, the Legendary wind of Provence” published by Damiani, which will be presented in Paris at Galerie Folia and  in Arles at the end of June.

This five day visit to New York was prompted by a Memorial in honor of  J.Robert Moskin at the Lotos club of which he was President. The ceremony was very moving with André Bernard and Cathleen Mc Guigan discussing his brilliant career as war reporter and editor of Look, and Gail Job, his assistant of forty years, giving an intimate account of him as an exceptional boss. I was privileged to know him for twenty years thanks to his dear wife, Lynn Goldberg, the most exceptional book publicist and friend. 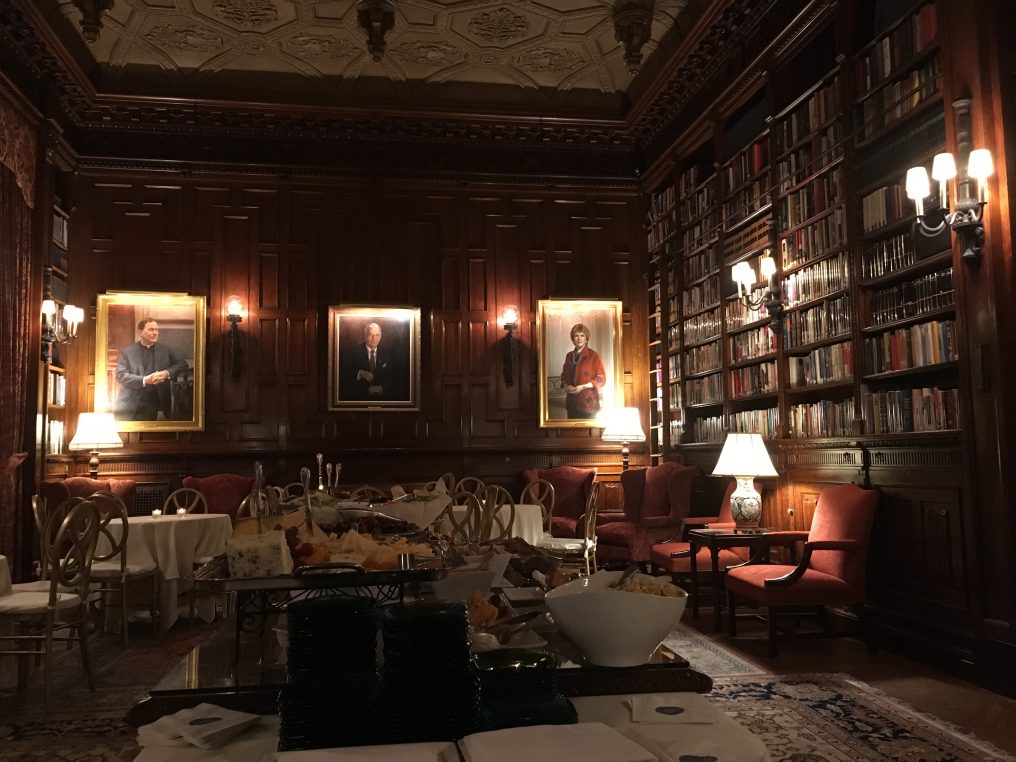 It was a sad but very chic ending to my trip, with writers and journalists Lilian Tuck, Daphné Merkin, Charles Kaiser, Mary Murphy and Maria Campbell, who is now scouting books for Netflix, attending the reception.

Far from the glitziness of Hudson Yards, the Lotos club, the Frick collection and its exceptional Moroni exhibition, and the Morgan Library with Tolkien, reassured me on the quality of intellectual and artistic life in the city. What a place of contrasts and of excellence, Manhattan is!