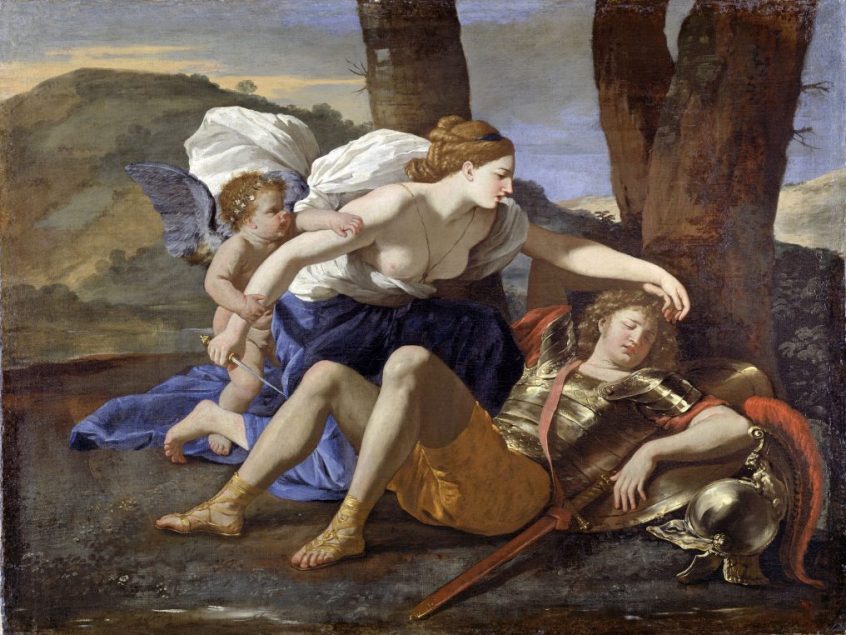 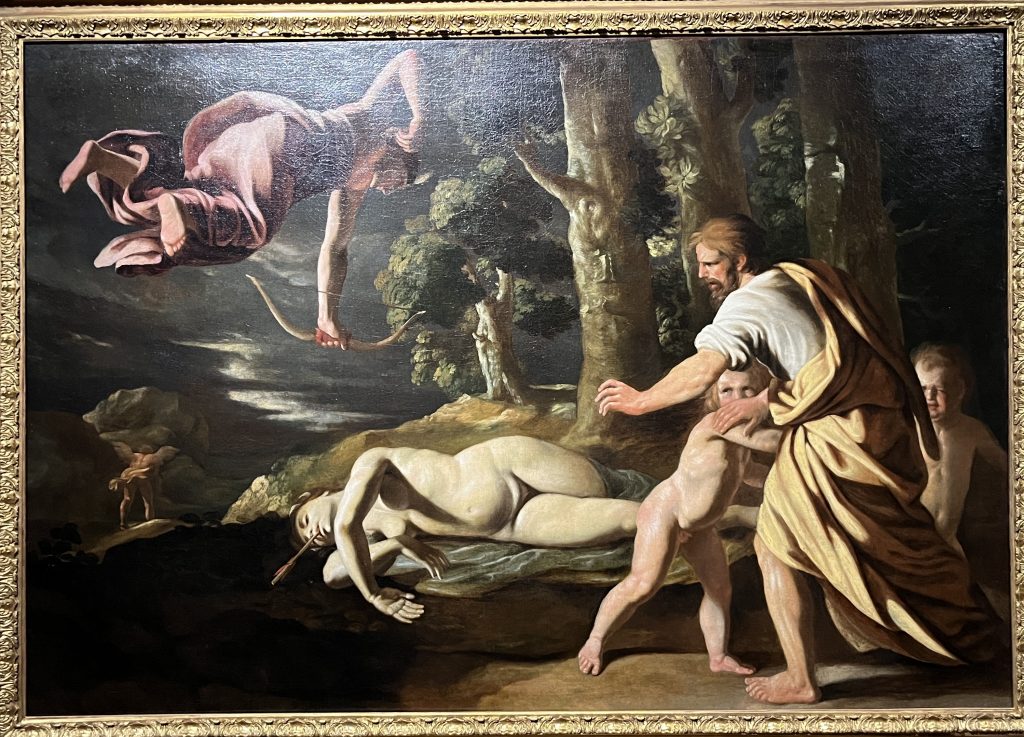 The Death of Chione, circa 1622, Lyon Musée des Beaux Arts

I never liked Nicolas Poussin whom I always considered too austere, even though Musée Condé in Chantilly holds at least 6 (including the Massacre of the Innocents) and the Louvre close to forty. So when I heard of the exhibition at Musée des Beaux arts de Lyon devoted to “Poussin & l’Amour“, I thought this might convince me of his genius. And it did! The show is badly installed in low ceiling rooms painted in different shades of ugly grey. But the works which have come from all over, from Windsor Castle to Fort Worth in the US and Germany, are totally fascinating and my favorite was the first one, “The Death of Chione” acquired by the museum in 2016, and painted when he was 28 for a silk manufacturer from Lyon. It is based on Ovid’s Metamorphosis, on the story of Diane (Artemis) shooting an arrow through Chione’s tongue because she pretended to be more beautiful than her. 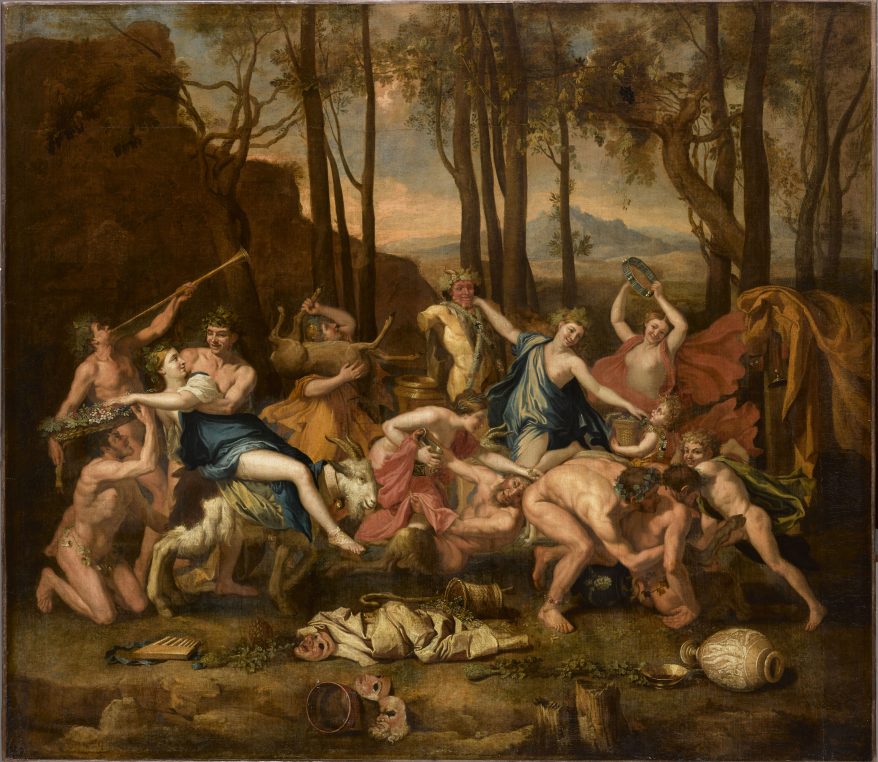 Whether they are called bacchanals or “Apollo in love with Daphne”, these paintings are incredibly lecherous and we were wondering with my friend, who commissioned them in Rome? High ranking clerics or amateurs of love scenes? The death of Chione was bought by a rich merchant from Lyon, some later bacchanals were commissioned by Richelieu. Ovid’s Metamorphosis are an unrivaled source of inspiration. Poussin very early on claims to be a painter-poet and one of his most beautiful paintings (there are two different versions) is “The Inspiration of the Poet” lent by the Louvre and by the Niedersächsiche Landesgalerie in Hanover. 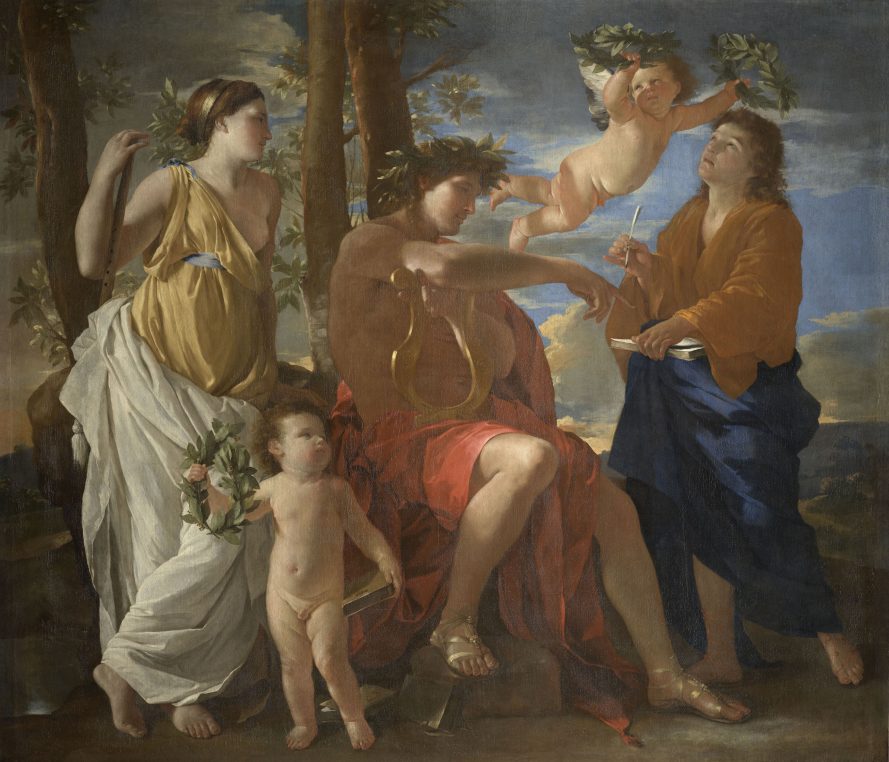 The first room is worth the visit by itself with these treasures and four drawings in ink from Windsor castle, lent by King Charles III. “The Triumph of Ovid”, came from Rome to prove that love inspires creativity, with a multitude of little “amours” who play a ball game and press Venus’s breast. It is an allusion to the painter’s friendship with the poet Giambattista Marino. “Venus spied on by two satyres” is so provocative that the MeToo movement would probably ban it today… 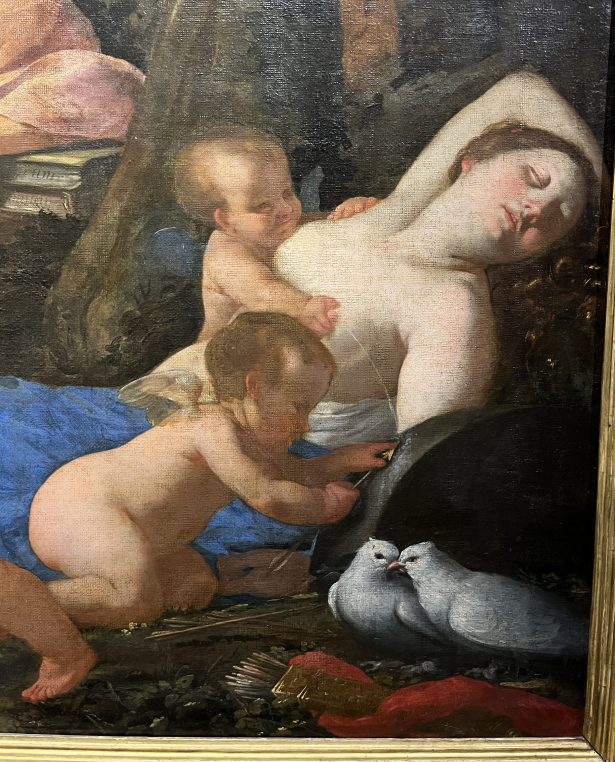 A satyre feeding Bacchus with grape juice when he is a baby is also very sensuous, associating wine to the pleasures of love. “Renaud and Armide” is inspired by “Jerusalem delivered ” by Tasse and relays the last crusade in the holy city. Armide is a Muslim magician who falls in love with the crusader she had planned to kill. It is again a masterpiece lent by the Dulwich art gallery one of my favorite art gallery in the world. 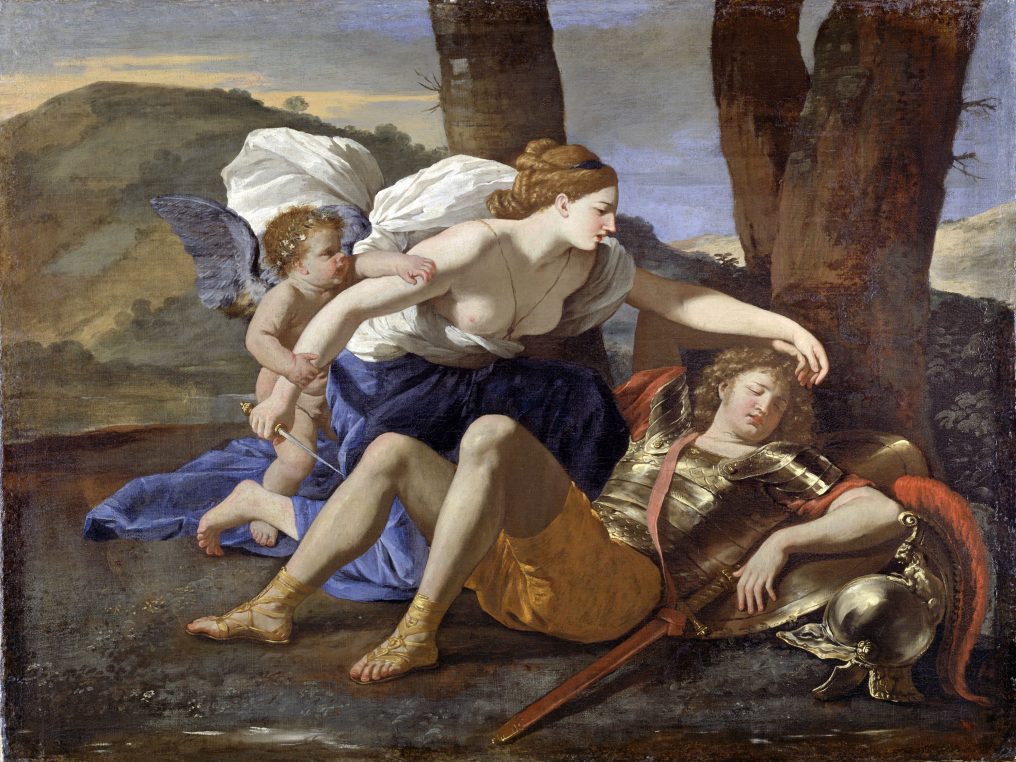 “Mercure, Hersé and Aglaure”, while Mercure penetrates in Hersé’s bedroom, her sister Aglaure bars the god to enter: it is a tale of sisterly jealousy. “Midas facing Bacchus” treats of the theme of greed (his body is transformed into gold and he cannot eat anything anymore). There are two versions of “Nymph and satyre drinking” one from Dublin and one from the Prado. Sadly the third version could not come from the Pushkin museum in Moscow. The largest landscape in Poussin’s work “Tempest with Pyrame and Thisbe” painted in 1651, came from Frankfurt. It is the darkest painting of the exhibition. 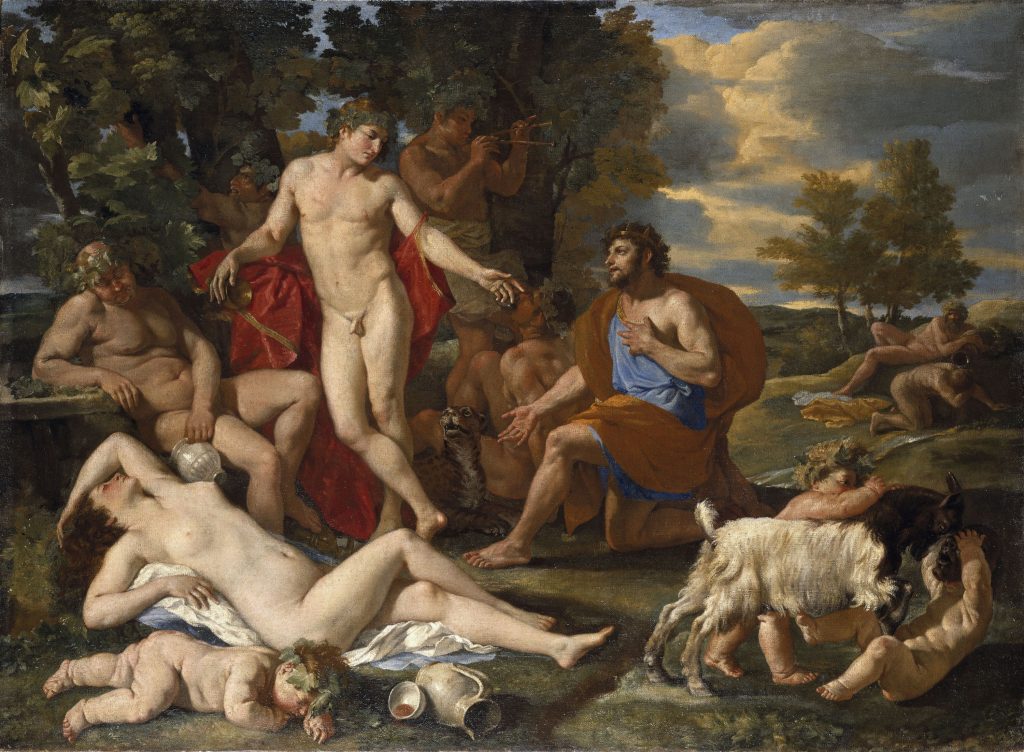 Following the Poussin show which includes 43 works, a small space exhibits masterpieces by Picasso which were inspired by the 17 th century painter. And the exercice is interesting. “The Triumph of Pan” and other bacchanals were mostly painted during the war when he was stuck in Paris in his studio but the most beautiful is a drawing painted in 1921, “La Source” inspired by Poussin and painted in Fontainebleau. 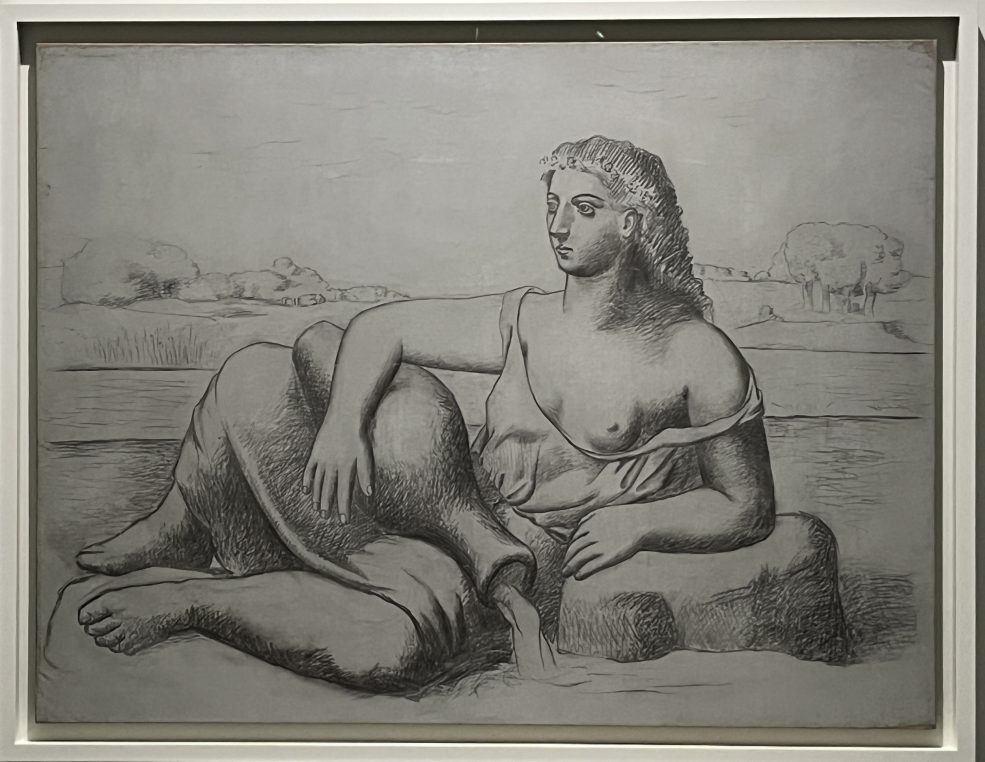 After the exhibition which was crowded (at 11.30 am) with three groups of visitors… we spent an hour in the fabulous museum where we were alone in the restored galleries. The collections include medieval art and Zurbaran, Guercino, Tintoretto, Veronese, and more Poussin of course but also a sculpture gallery and it is worth stepping in the former abbey Saint Pierre’s refectory. We ended a perfect morning with a delightful lunch at Abel, a typical bouchon lyonnais where we had rosette de Lyon and hot sausage on lentils, Tête de veau gribiche and Poule au riz, sweetbreads and kidneys. 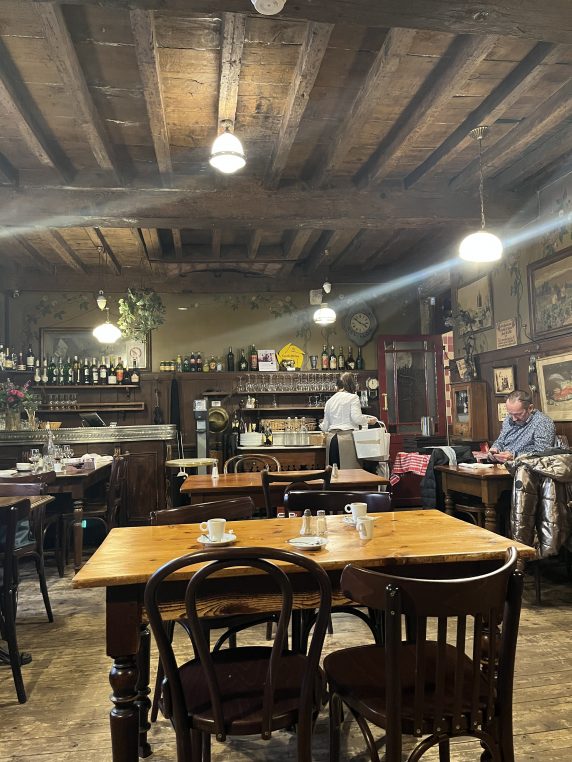 So you can make a one day trip very easily from Paris (2 hrs on the TGV) or stay overnight in the very luxurious former Hotel Dieu hotel overlooking the Rhône, and attend the opera where Rossini’s “Moise and Pharaoh” is playing until February 1. The museum of fabrics is sadly closed.

3 Comments on “Nicolas Poussin is a sexy hit in Lyon”