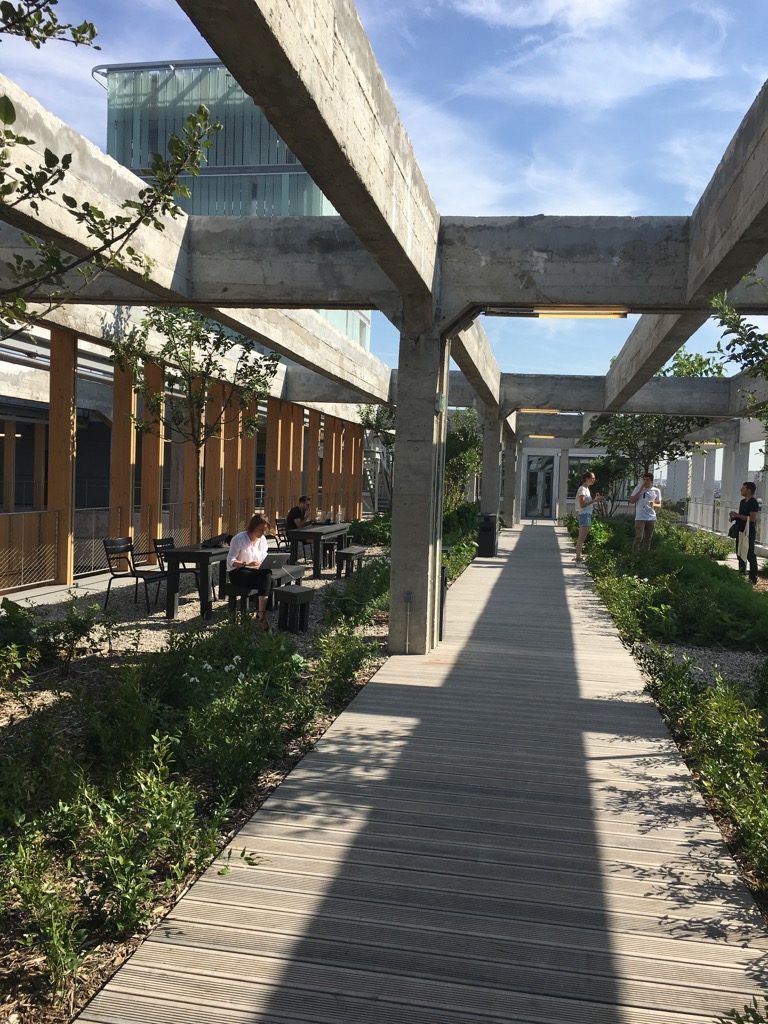 The new Pantin, a suburb north east of Paris, looks glamorous and slick. Some people compare it to what has become of  Brooklyn in the last twenty years. The renovation of Magasins Géréraux, a huge warehouse located on the canal de l’Ourcq, by advertising agency BETC, is an event : the trendy 900 employees are creating a whole new cultural and gastronomic world around them, in this formerly poor banlieue. 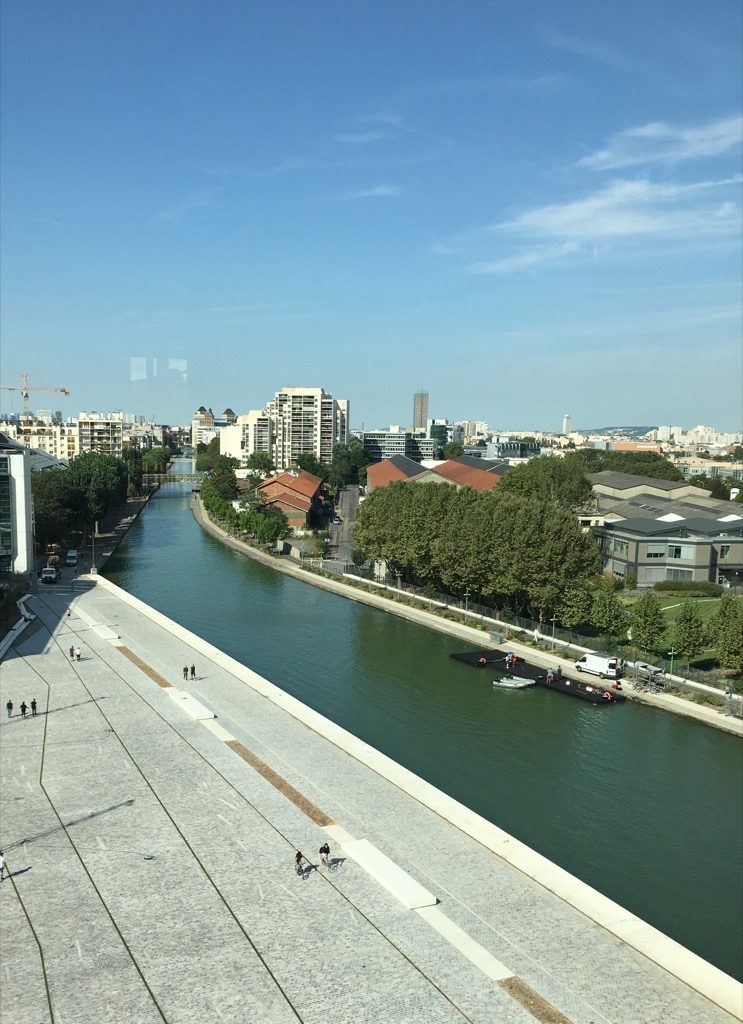 And real estate is booming after Hermès and Chanel have joined Thaddeus Ropac and Centre National de la Danse in Pantin. There is hope and joy in the suburbs!

The former Magasins Généraux were prey to graffiti artists for a decade, photo Meffre et Marchand

I was lucky to meet Fanny, the right hand lady of CEO Rémi Babinet, who took the time to share her enthusiasm with me. The whole building was conceived so that all employees can choose where they want to work and how. Small units for two, larger meeting rooms for 20, sofas, terraces, long tables, round tables. No one has a dedicated office (only a locker) but there is an app that lets you know where your colleagues are at all time, in case you need to meet with them. I know that I would look immediately for the office with a view!

Many different cafeterias, including one on the fifth floor terrace garden, allow you to interact with other people. It is a completely new way of organizing work, and creativity is at stake everywhere.

This twenty year old agency, which produces Evian, Air France, Peugeot, Lacoste, Petit Bateau, McDonald’s campaigns, has won many awards for best ads and its CEO has been named one of the best 10 creative directors in the world by Forbes magazine. They will soon open in L.A. and already have correspondents in Shanghai. Using choreographers and designers, BETC also has a record label and its own film and photo studios.

On the ground floor of the building, two restaurants will open before the end of the year. La Bellevilloise, which offers food and cultural events and Le Bichat, a bio accessible bistrot. The bet is that many young people will be moving to Pantin, and renting from the neighboring new buildings, overlooking the canal. And suddenly a whole new life is surging ! 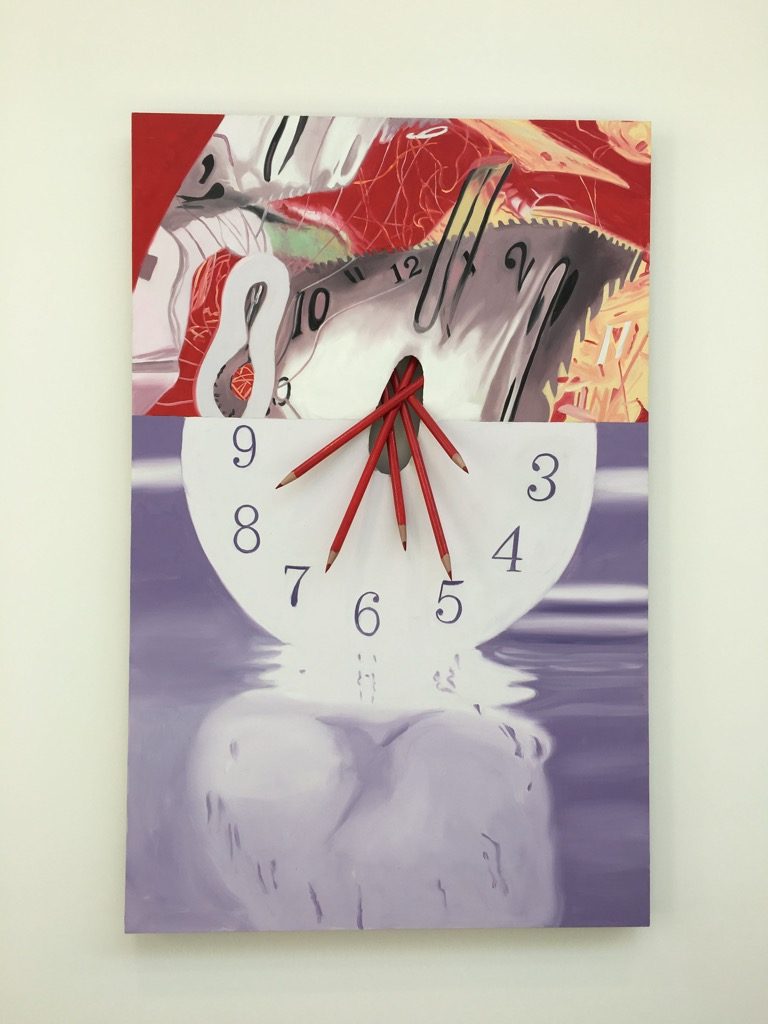 James Rosenquist, “The hole in the center of the Clock-Time Keeper”, 2008

I then drove five minutes away, to my very favorite art gallery, Thaddaeus Ropac in Pantin,  which exhibits « Four decades of James Rosenquist » until January 7 th. I saw my first Rosenquists at Jean Claude Binoche’s contemporary art auctions in the seventies. And was happy to see that  he is still as lovable as he was then. The gallery is astonishingly beautiful in the sun and the thirty two large works are so refreshing and exciting ! The 1973 acrylic on canvas works are now oil on canvas.

There are major works here including « The meteor hits Monet garden » which is so Giverny in feel and the “Geometry of Fire”, his largest painting (3,35 by 7,62 m) made in 2011 after his house burnt down in Florida. A sort of resurrection painting which shows the forcefulness of the 83 year old artist. 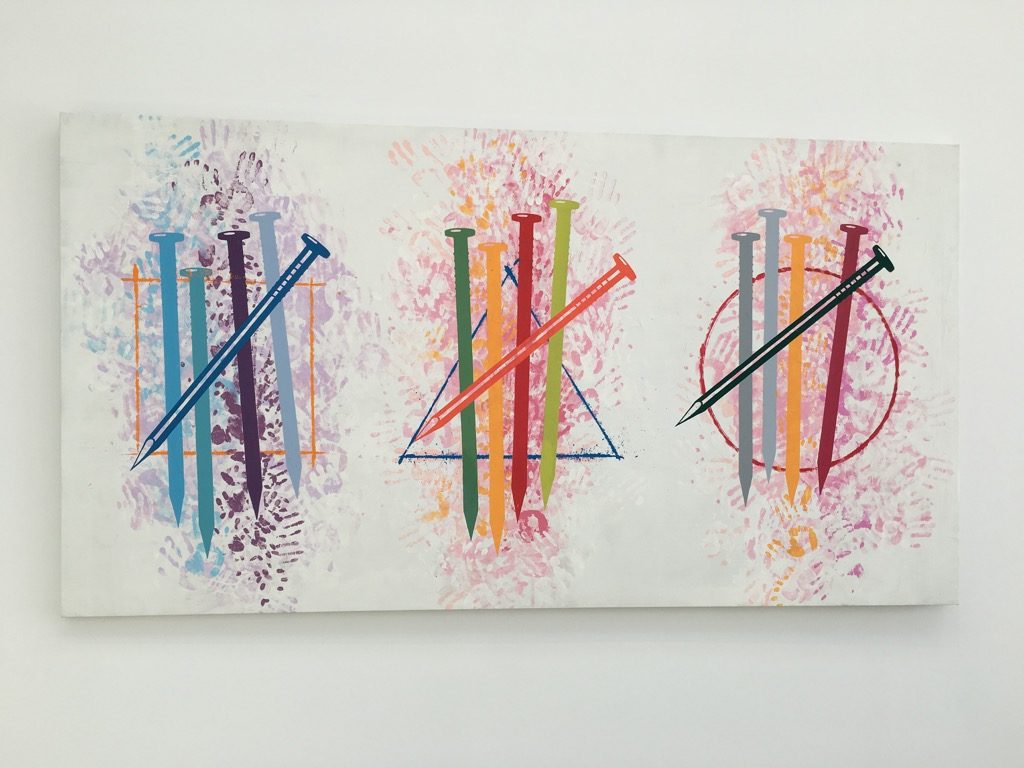 Untitled, circa 1973, acrylic and oil on canvas

It is fascinating to see the evolution of his art, about time and the Einstein‘s Theory of relativity, over this forty year period and the youth he still shows today. Thirty preparatory collages are shown in the Marais Thaddaeus Ropac gallery.

2 Comments on “Pantin, the new place to be”