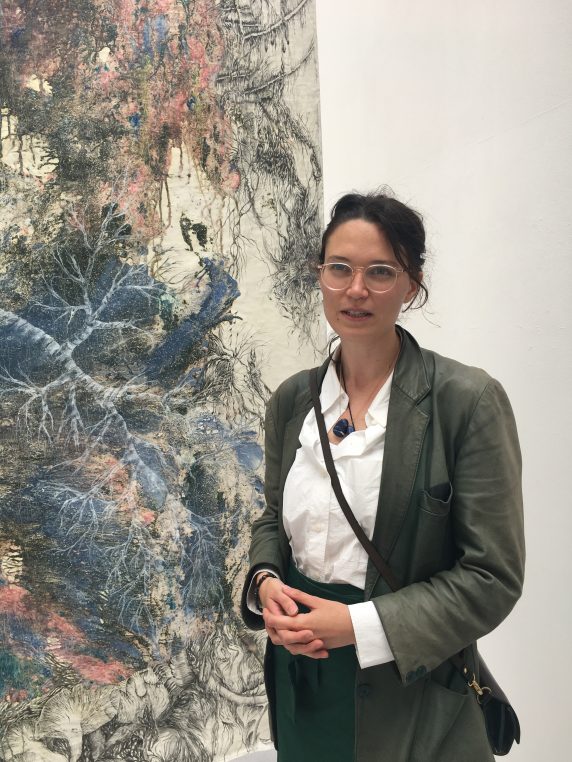 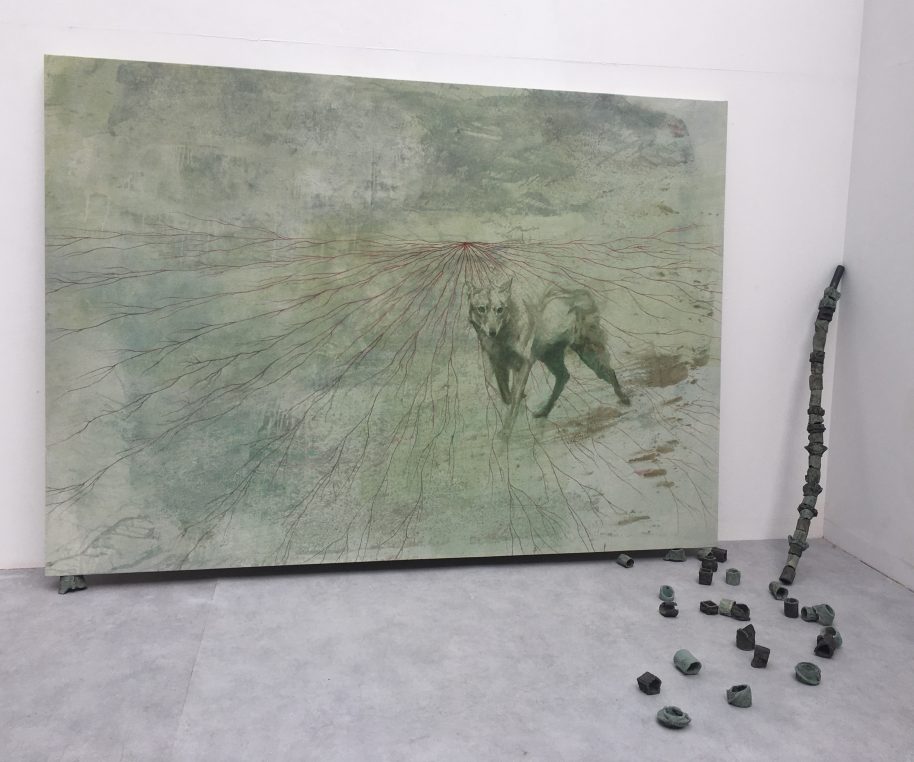 The animal is part of the landscape, here a wolf “Entités Loup” in a desert and the walking stick, “Bâton de voyage intérieur”  is made of sculpted wrought iron with sandstone rings

Pauline Brami is graduating from Ecole des Beaux Arts and after presenting her paintings to the jury last week, she was exhibiting them, for one evening, in the main hall under the wonderful glass roof. The space she invested is full of poetry and nature, and her style is quite fantastic. She uses natural plants to create a special paint for the surface of the canvas and then uses graphite pencil and oil on top to draw. She was raised in Camargue and spends a lot of time in Brittany at Cap Sizun, near a very small traditional farm, and has a particular passion for trees, roots and familiar animals. The series presented here called “Entités” refers to them as spirits in a destabilized world. 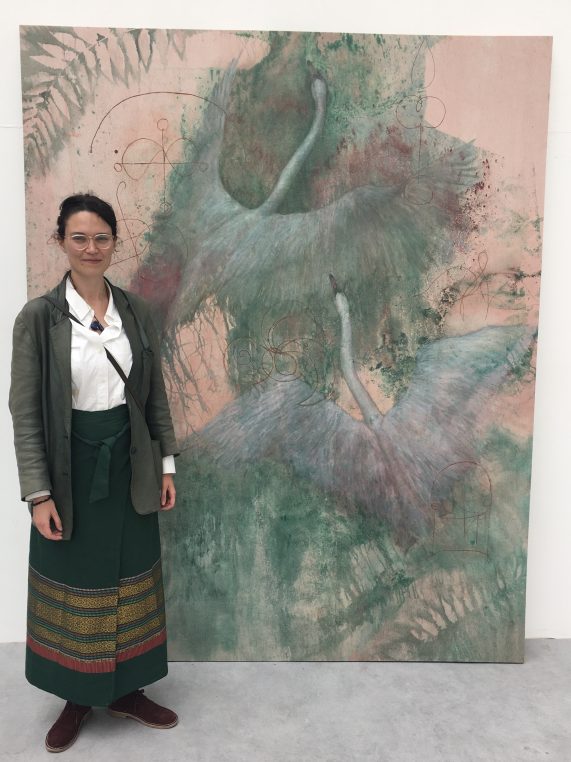 Pauline Brami in front of a very lyrical set of swans, “Entité cygne”

In the show she mixes roots, dead flowers and sandstone sculptures with her paintings adding an extra lyrical dimension to the canvas. The different animals, does, foxes, wolves, snakes, swans, starlings, all represent the destabilization of our world. Pauline Brami has thought a lot about the influence of plants and animals on our lives and has seen wolves in the Gard where she grew up. 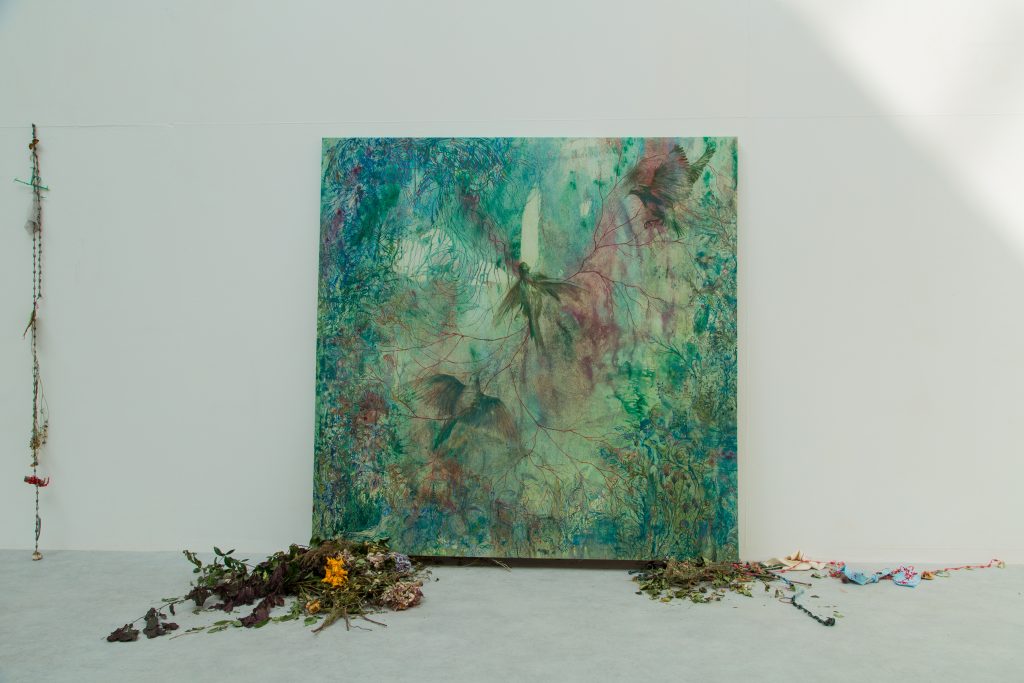 “Entité Etourneaux” (Starlings) is presented with embroideries and dead flowers

Her very large painting floating freely, “Liliphianea” consists of a huge root in graphite and oil. She painted it outside and when it started raining, the oil paint dripped. The details of this work are amazing and you cannot take your eyes off it. The title is a word she invented, inspired by Lilith, the goddess of earth and Latin names which are usually attributed to plants. It is a work full of energy and meant to cure from illness. 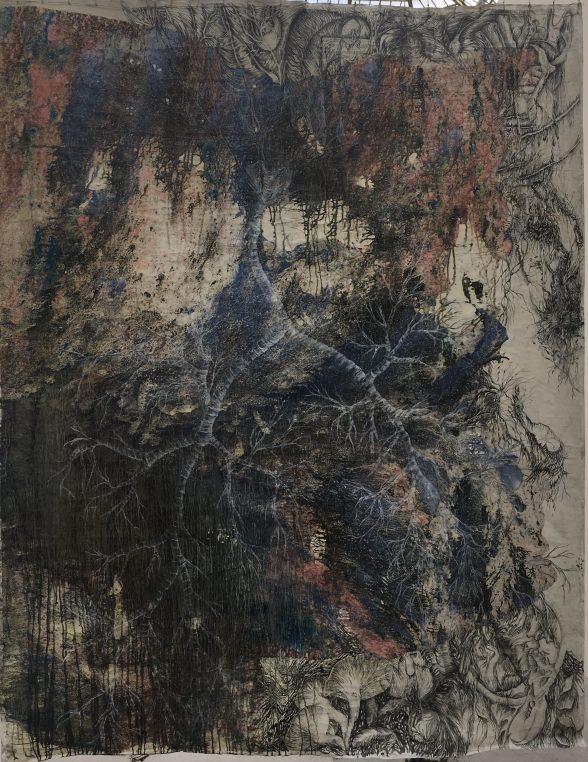 Pauline Brami does not have a gallery yet but will exhibit on rue des Minimes in November. You can reach her at this address: pauline.brami@gmail.com 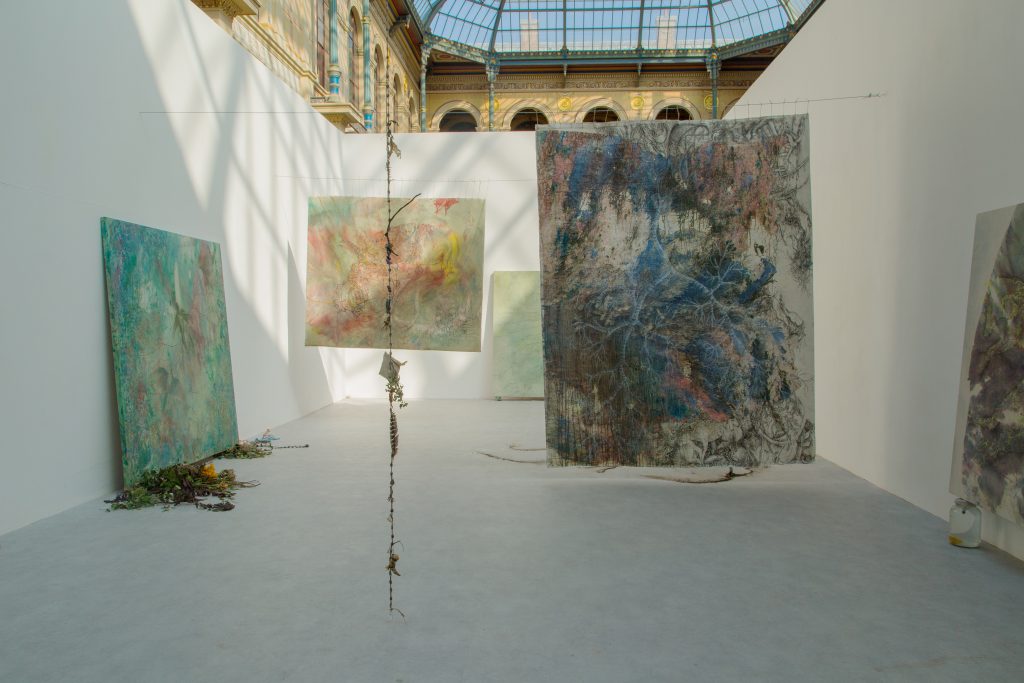 At Ecole des Beaux Arts the canvases float in the magical space with “Liens pour racines invisibles” (ties for invisible roots), a hanging composition of embroidered and tied threads made of bits and pieces which she found.