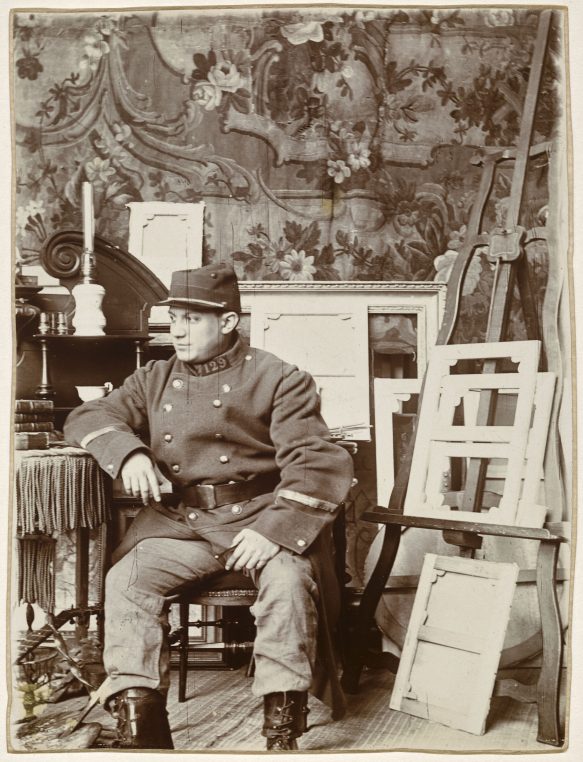 Pablo Picasso was always involved politically in his times and the exhibition at Musée de l’Armée in the Invalides is both original and instructive in how artists can change people’s mentalities. “Picasso et la Guerre” starts with drawings of medieval soldiers drawn by Picasso in 1895,  when he was 14. It is an ink on paper representing with a precise and expressive style, the battle of Covadonga where in 722, Muslims were repelled from Asturia establishing the first victory of christians in Spain. He never joined the army but lived through three main conflicts, the two World Wars and the Spanish civil war and illustrated the Korean War and the Algerian Independence. The show is unusual and captivating. 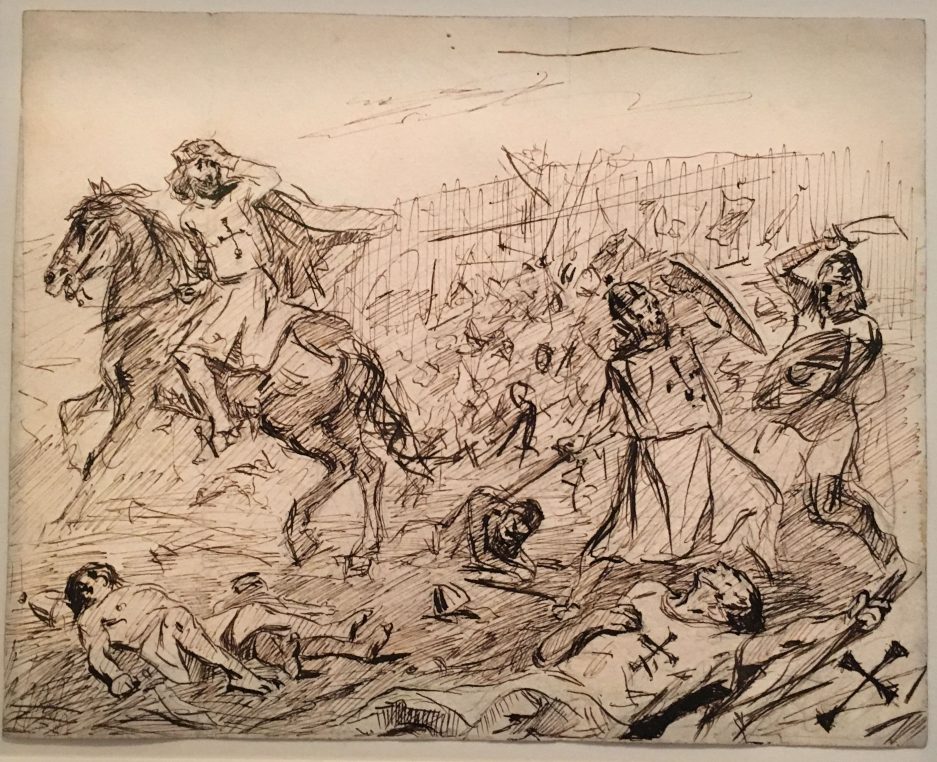 When the First World War erupted, Picasso started corresponding with poet Guillaume Apollinaire who had enlisted and sent him news from the front. His letters are covered with patriotic drawings and he sends news from Braque, Derain, Juan Gris and Jacob.  He never really covered the war in his art but reacted to the horror of daily life with happy themes like  the series of Harlequin “the mischievous character from Commedia dell’arte” which he started in 1914. 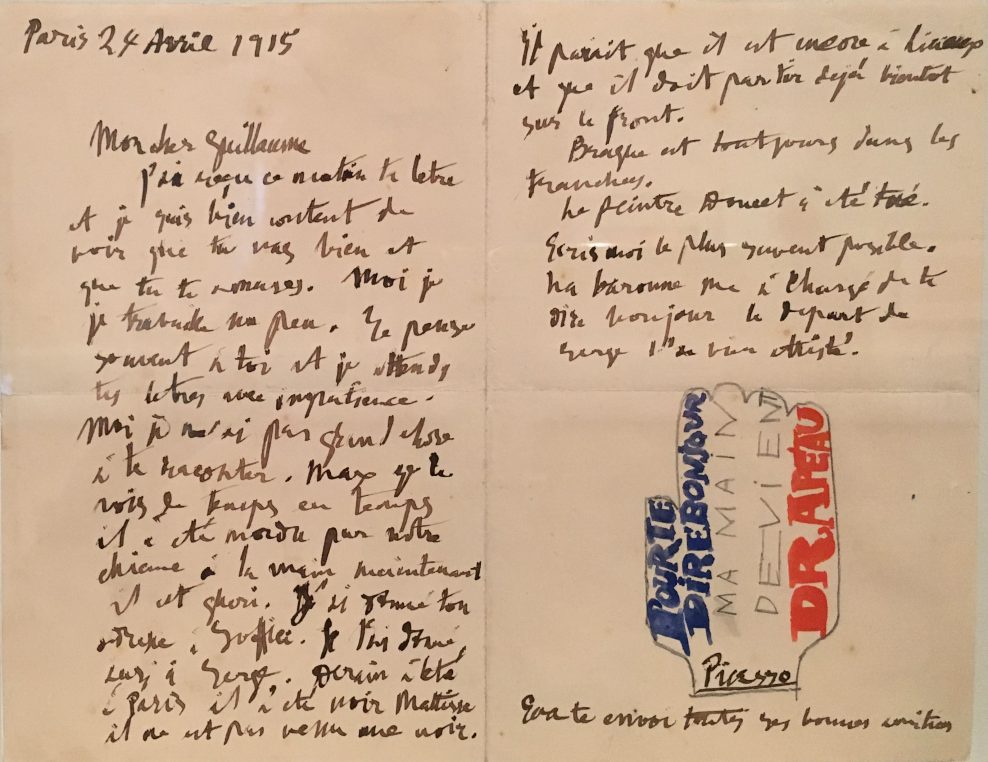 One of the strong moments of the exhibition is of course the Spanish civil war and the bombing of  the Basque town of Guernica, on April 26, 1937. The painting had been sent to New York in 1939 for an exhibition and remained there throughout the war.

Just before, in 1933,  he had cast a bronze sculpture of “The Speaker”, referring to Hitler and to Il Duce (Mussolini). His “Horse head” and numerous “Woman weeping” drawn in 1937 are poignant illustrations of the massacres.

At the beginning of WW2,  he decides to ask for his French naturalization and the letter dated April 3, 1940, sent from 23 rue la Boétie is very moving. As we learn in Michèle Cone’s book, “Artists under Vichy” (Princeton University Press, 1992), Picasso was constantly threatened having been listed as a degenerate artist during the war.

He worked in his studio of rue des Grands Augustins and was safe because of his fame and relative wealth, but was constantly interrogated and intimidated by the Nazis as a Spanish refugee. The Spanish Ambassador had expressively asked the Germans to forbid him from exhibiting. The author quotes Brassaï who visits him regularly at the studio and photographs his works: “His presence among us is a comfort and stimulant…” 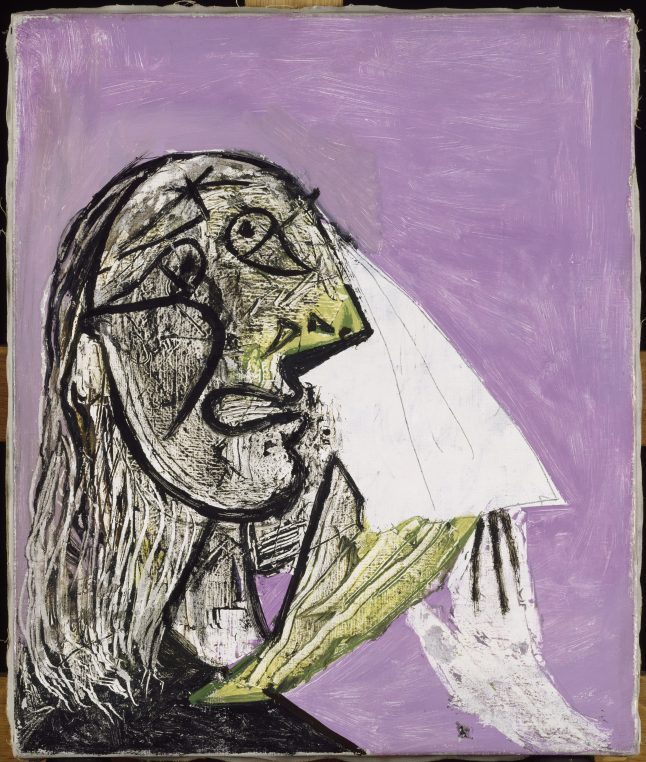 Picasso was in Royan, Charente Maritime,  when the war was declared. He decided to stay in France, because he just “preferred to be here” rather than flee, once again. And this gave him immense prestige in the eyes of the other artists. He was given the choice by Alfred Barr and the Emergency Rescue Committee, which was organizing for artists to leave for New York, but he declined. His Guernica was there already with a group of paintings he had exhibited in 1939 and they remained there during the war.

It was courageous because Dora Maar, whom he had met and painted in Royan in 1940, was half jewish and he realized once the painting was finished, that “the head resembled a German helmet”.

A general view of the show with the bronze sculpture of “Man with a Lamb”, March 1943 © Musée de l’Armée, Anne-Sylvaine Marre-Noël

There are lovely photographs by Robert Capa and Lee Miller shot in his studio in 1944, followed by the sad portrait of “Child of Oradour” made in 1947 in commemoration of the massacre of children in Oradour sur Glane.

Later, Picasso was involved in portraying the Korean massacres in a painting inspired by Poussin’s “Massacre of the Innocents” and Goya’s 3 de Mayo painting, commemorating Napoleon’s killing fo the Spanish.

He also did a portrait of Algerian independantist Djamila Boupacha in 1961, who was raped and tortured for her role in FLN, the Algerian liberation front. She was defended by Gisèle Halimi and Simone de Beauvoir and finally amnestied in 1962. She is still alive. 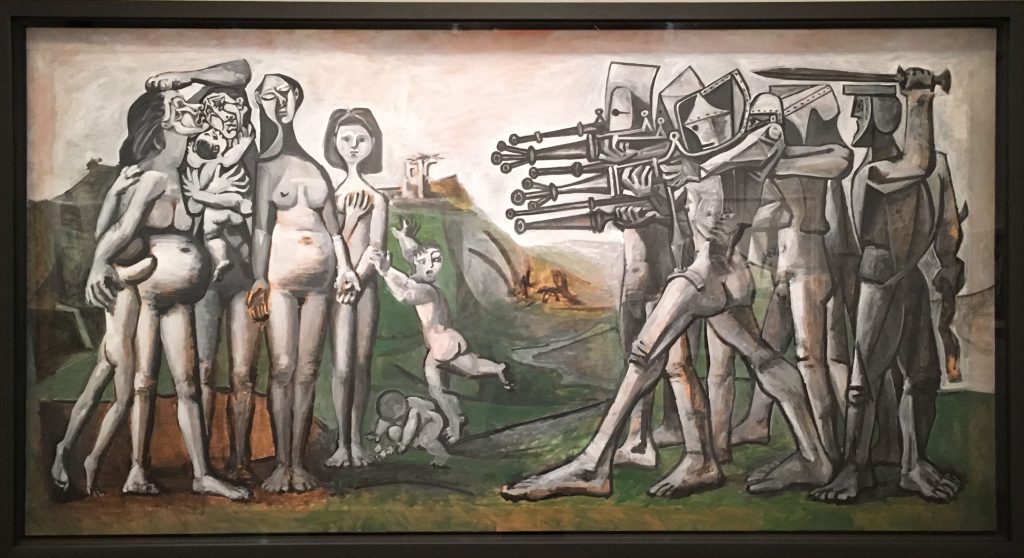 The exhibition is very rich with a mixture of documents, large paintings and sculptures lent by all the Picasso museums and by Centre Pompidou.

The Musée de l’Armée is quite fascinating in itself and worth the visit, and down below is the Général de Gaulle Memorial.  The access is through the beautiful courtyard (Until July 28).

4 Comments on “Picasso and the war, at the Invalides”