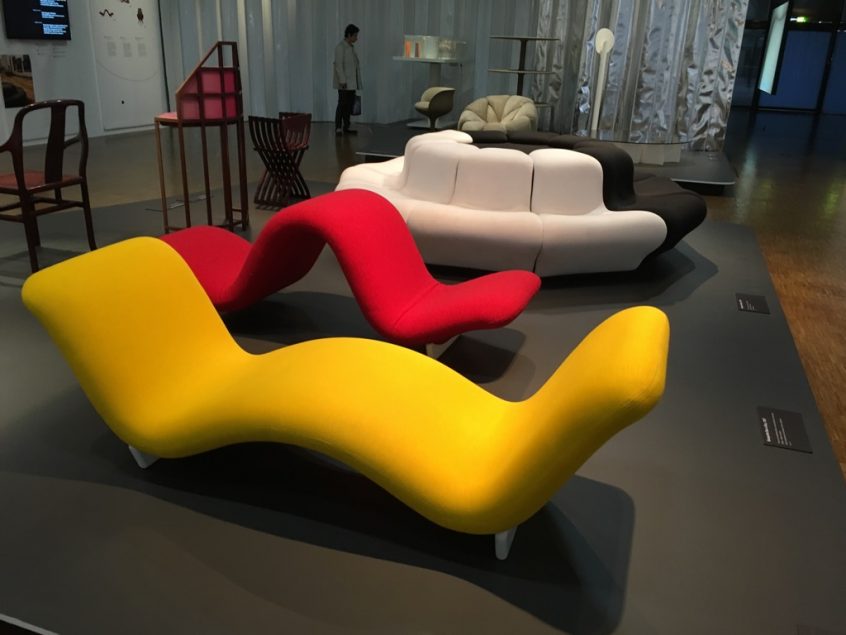 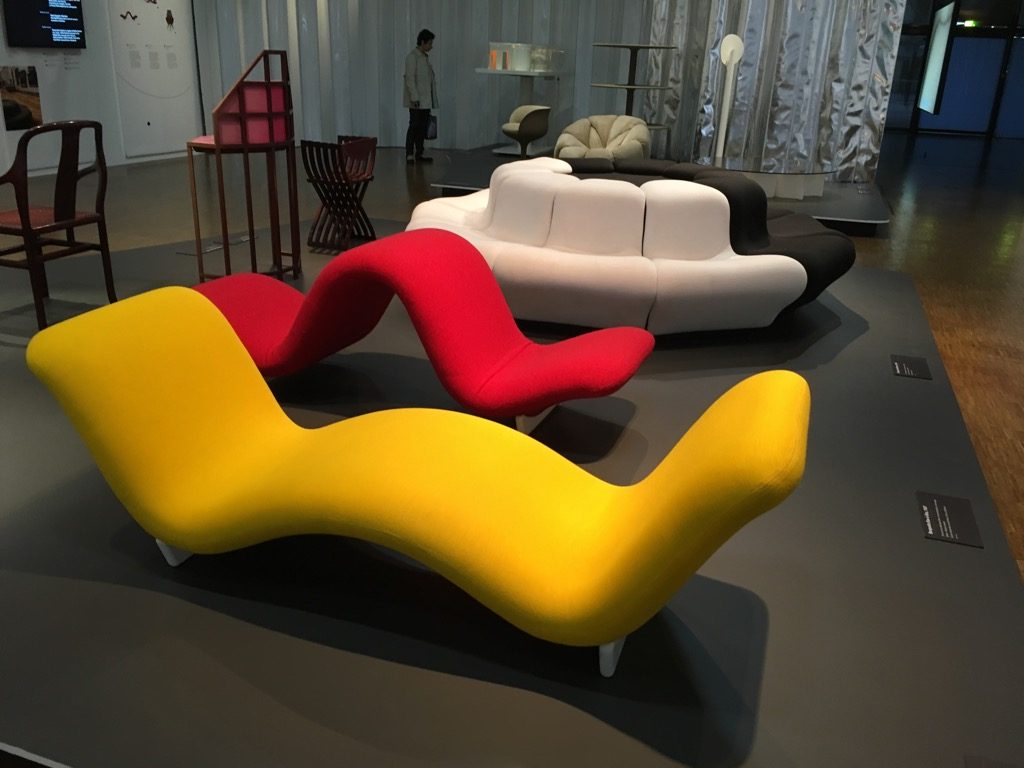 It is a fascinating and fun exhibition that Centre Georges Pompidou has organized to celebrate Pierre Paulin, the French-Swiss German designer, who died in 2008. He was revealed to the public when President Pompidou commissioned a modern decor for the Elysée Palace from him in 1968. With the simple order: “don’t make any noise”. His furniture and the dismantlement of the Second Empire rooms created a unique shock in Paris and the Pompidous were considered very audacious art supporters from then on. Paulin refers to the rooms he built in fabric at the Elysée, as the igloo. The building of Beaubourg, became their second contemporary art endeavor and it is just perfect that Pierre Paulin’s furniture should be exhibited there all summer. 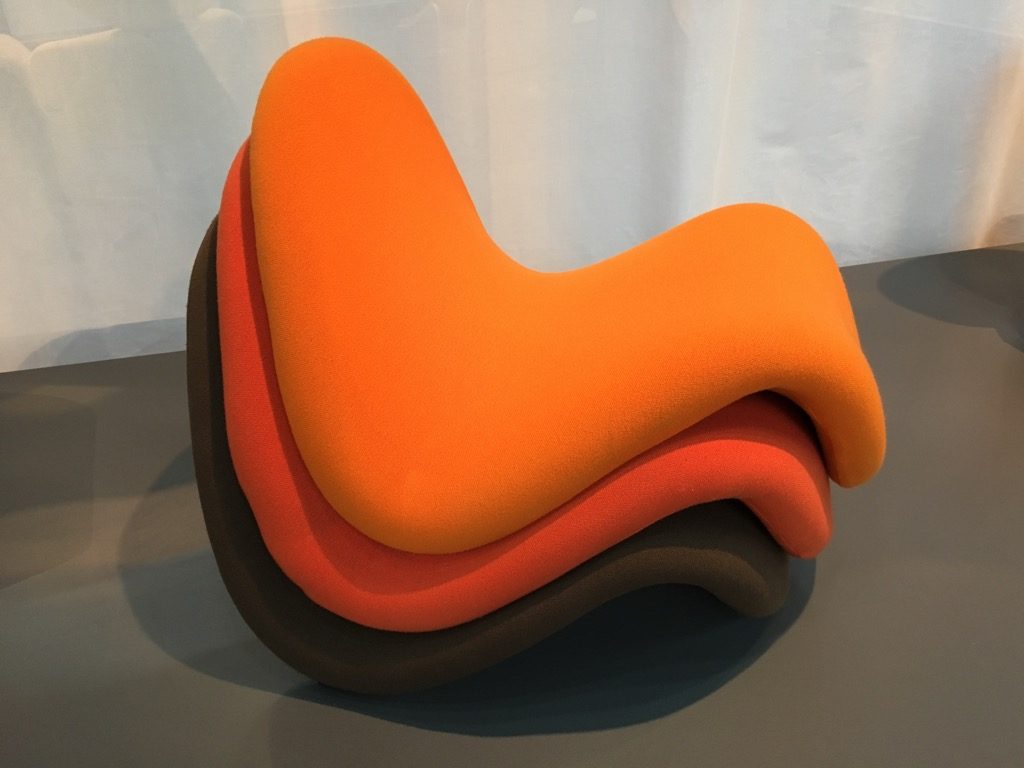 The show located on the mezzanine space, is uniquely bright and playful and the hundred chairs, desks, carpets, suspensions, models and drawings exhibited (until August 22), show what an important designer he is in France. When in the 50’s and 60’s, most Northern countries such as Sweden, Finland and Denmark were already selling contemporary chairs and furniture and produced such striking designers as architect Alvar Aalto, the French were strongly holding on to classical furniture. With new materials and fabric covered aluminum, Paulin managed to create simple furniture for everyone. 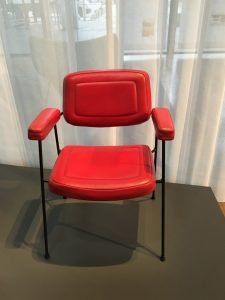 Three films are shown in the exhibit, where he explains how impressed he was by these Northern designers. He describes  his technique and his projects and one gets to lie or sit in his chairs to watch them. They are wonderfully comfortable with their elastic fabric and round shapes. And Pierre Paulin is so attractive on screen that it is hard to listen to what he says. 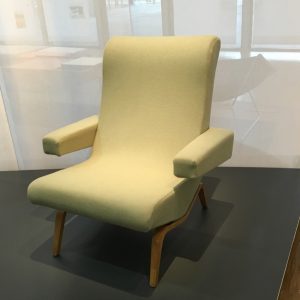 An alumni of Ecole Camondo, Pierre Paulin worked first for Thonet France editions, for Artifort and the Mobilier National when he worked at the Elysée palace. The excitement of all workers from this state manufacturing company is charming and photos of the work in progress are quite fascinating.

The sofa in the hallway of the exhibit. One would like to spend the whole  afternoon lying on it

Today, his son Benjamin Paulin is in charge with his mother Maïa, of his legacy, and they edit some pieces of furniture which can be bought on www.paulinpaulinpaulin.com.  At centre Georges Pompidou, there are a few armchairs for sale including Ribbon for 4 811€. 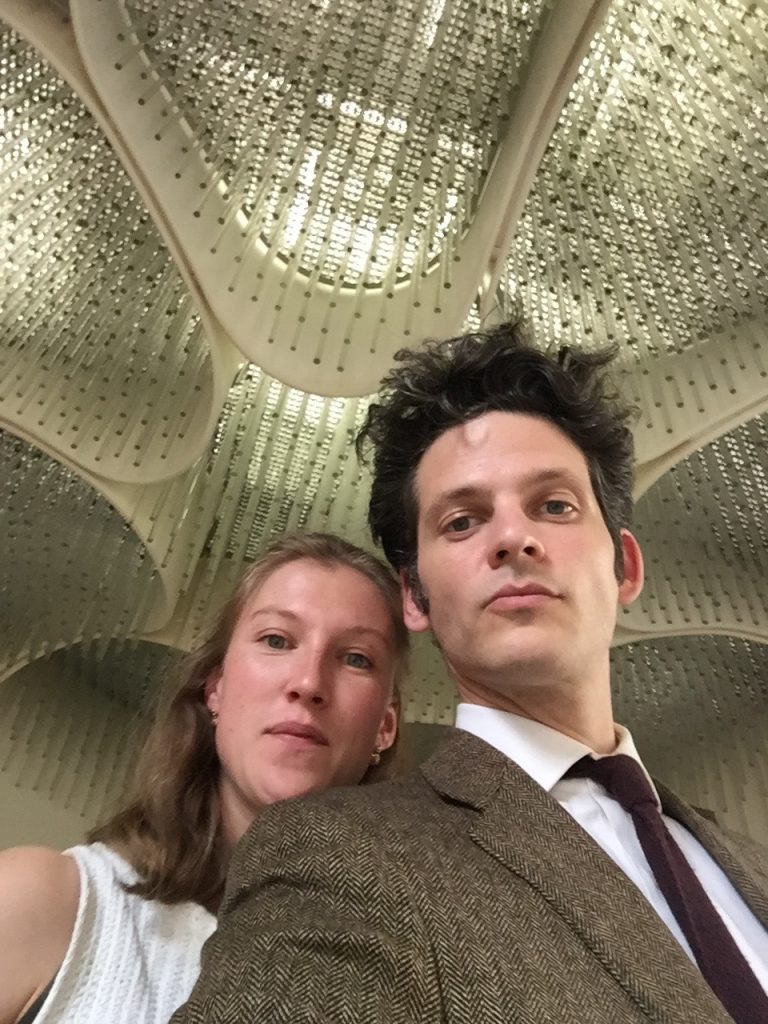