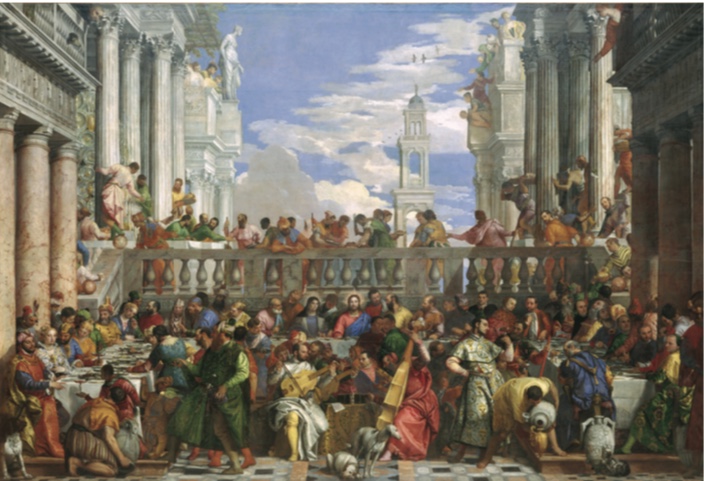 Napoléon’s death’s 200 th anniversary is being celebrated everywhere this week, and even President Macron attended the ceremony around his tomb at the Invalides with the young Jean-Christophe Napoléon Bonaparte (b. 11 July 1986), a Harvard Business school graduate, who is the pretender to the throne. The Emperor has created many fabulous schools and law reforms but has also left tragic remembrances and I chose to read the new fascinating art history book by Cynthia Saltzman “Plunder” to understand the qualities and huge faults of one of France’s most controversial leaders and collectors. 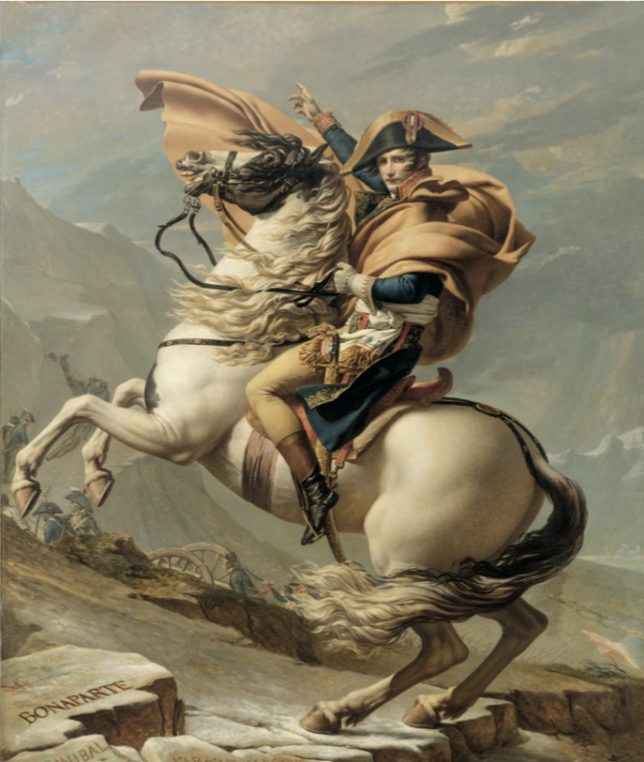 “I had the idea of writing about Napoleon’s plundering when I was writing “The Portrait of Dr. Gachet,” and researching the part of the painting’s history related to the Nazi regime. Books about Hitler’s looting of Europe’s art would bring up Napoleon as he also plundered on a vast scale.” “I’ve written about the transfer of art, the shifting fortunes of paintings as they moved from country to country, owner to owner—and the way they meant different things to the various people who owned them. And in a way, I thought of plundering as an extension of collecting.” 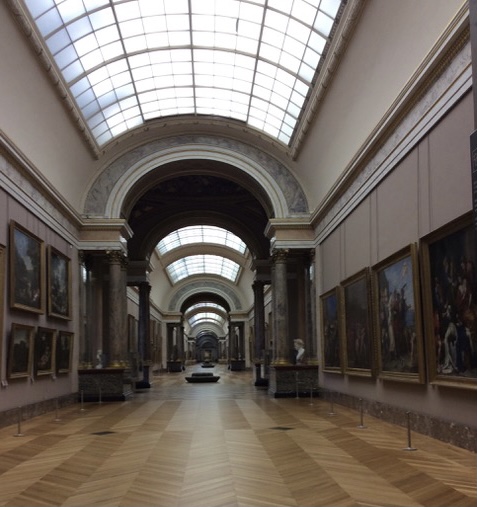 La Grande Galerie of the Louvre at night in February 2020, photo Cynthia Saltzman

Art historian Cynthia Saltzman used to be a reporter for the Wall Street Journal and she has travelled to Paris every year but one, since 2013 in order to study Paolo Veronese’s “Wedding Feast at Cana” at the Louvre. “For the research, I focused on Venice at first—and went in 2013 and 2014.  And, also, in 2017, I went to Rome.” The book is a double study of the Veronese painting based on his writings and many art historians’ reports, and of the history of Napoleon’s conquests and the making of Musée du Louvre. The detail with which the author researches the plundering of the Emperor during his military campaigns is totally riveting. She tells us of the fascination which “The Wedding” exerted on powerful men as early as the 17 th century  such as French Minister Colbert who “had forced his way to the front of the line of princes wanting to buy the Veronese”… “but even cash offered by Europe’s most powerful monarch (Louis XIV) … failed to persuade the Benedictine monks to sell”. 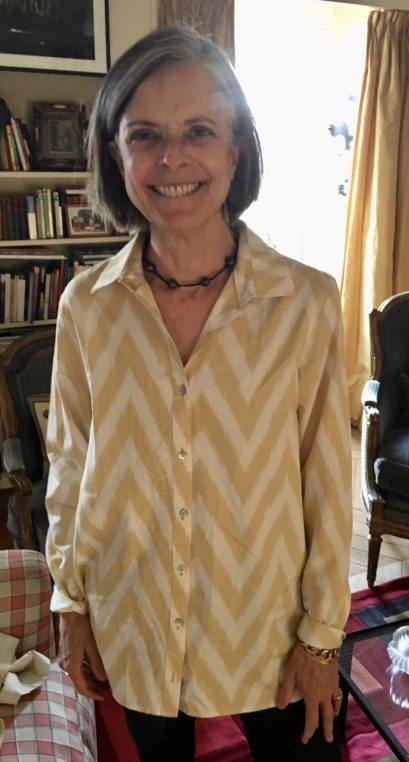 Veronese started the painting in June 1562, for the monks’ refectory designed by Andrea Palladio at San Giorgio Maggiore’s Benedictine abbey in Venice. The 22.2 by 32.6 feet canvas was torn from the wall by Napoléon’s men in 1797. A drawing on page 19 of the book shows a dozen French soldiers at work in the Duke of Parma’s gallery, taking a Correggio away. The fact that such an awful scene was recorded is already interesting. “Napoleon Bonaparte was a plunderer of art, one of history’s most accomplished. He forced his enemies to pay an aesthetic price for defeat by giving up statues and paintings.” “He also understood that by seizing works of art, the victor could transform the glory of conquest into tangible form”. This attitude has often been used today by states who use art institutions or museums to “clean” their  image.

Some of Cynthia Saltzman’s writings will shake the French circles of art historians and museum curators. At a time when restitution is on every lip, one is terrified of what implications this book could have on the collections of French Museums!

“Almost from the moment Veronese completed the canvas in 1563, news traveled that he had created an extraordinary work of art … with 130 life-sized figures standing, sitting, and moving about in three dimensional space.” “Across the Wedding Feast of Cana sweeps a scene of pleasure and delight.” One of the very interesting moments of the book is the painter’s defence at the time of the Inquisition on page 52. “I have represented these two halleberdiers one drinking and the other eating, nearby on the stairs. They are placed there  so that they might be of service, because it seemed to  me fitting, according to what I have been told, that the master of the house, who was great and rich, should have such servants.” 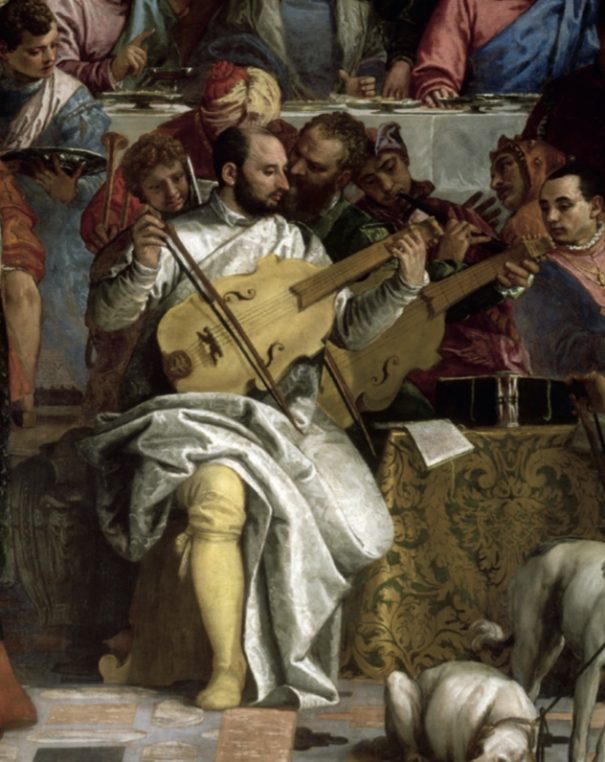 Paolo Veronese, “The Wedding feast at Cana (detail), 1563. In 1674, Marco Boschini claimed that the musician in white was a self portrait of Veronese

There are many fascinating stories in the book including the one of Joséphine being charmed in Genoa by painter Antoine-Jean Gros, a disciple of the painter David, and luring him to Milan to meet the then General Bonaparte. But also a brilliant analysis of the way art became a way to attract the public opinion. The Salon Carré of the Louvre “designed as a reception room for Louis XIV had been the most important exhibition space in France…”. “It was in the Salon Carré that the Louvre administrators mounted three exhibitions of Napoléon’s Italian spoils”. “On May 21, 1801, four years after it had left Venice, the Wedding went up in the Salon Carré at the Louvre.”

All along the book, the author reminds us of the Emperor’s campaigns, of his creation of educational, financial and religious  institutions and the writing of the Napoleonic Code (Code Napoléon), the legal document which still stands today, in relation to the plundering. Her style is refined and precise, with great attention set on visual details and fun descriptions. While the topic is serious, the story is almost told as a thriller. There are many illustrations in the text, including a painting of Napoleon visiting the Louvre by Couder, which makes the reading even more visual. 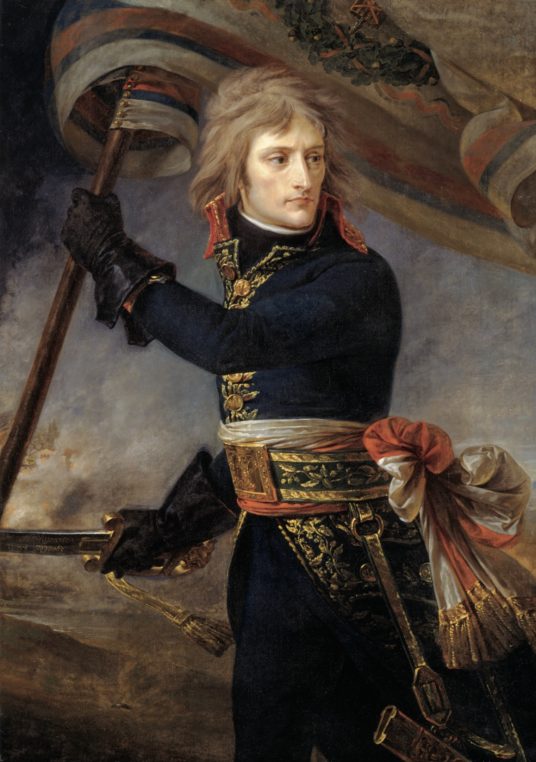 In the Epilogue, Cynthia Saltzman gives a brief history of the whereabouts of the painting within the Louvre and mentions its latest installation, facing La Joconde, in La Salle des Etats, which in 2019 was painted dark blue (a mix of black and blue painting) on the occasion. The largest painting of the Louvre has left Paris twice in 1870 and on August 25, 1939. 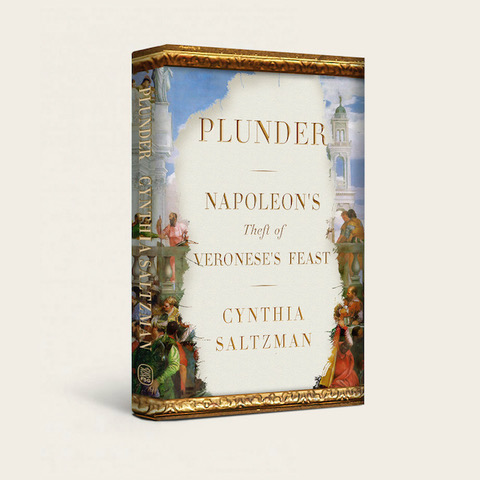 This latter time, it was rolled up and transported by a truck used by La Comédie Française, and taken to Chambord, later to the monastery of Loc-Dieu near Villefranche de Rouergue, to Montauban and ultimately to château de Montal which belongs to the Duc de Montesquiou. It only returned to the Louvre on February 13, 1946.

I tried to quote from the book as much as possible to show you how lively the writing is and what a series of adventures, both painting and plunderer have gone through. One thing is certain, the word Plunder will never be the same again after this masterful work. Now that I have discovered it, I will use it again and again!

“Plunder, Napoleon’s theft of Veronese’s feast” is published by Farrar, Straus and Giroux in the US and Thames & Hudson in the UK. 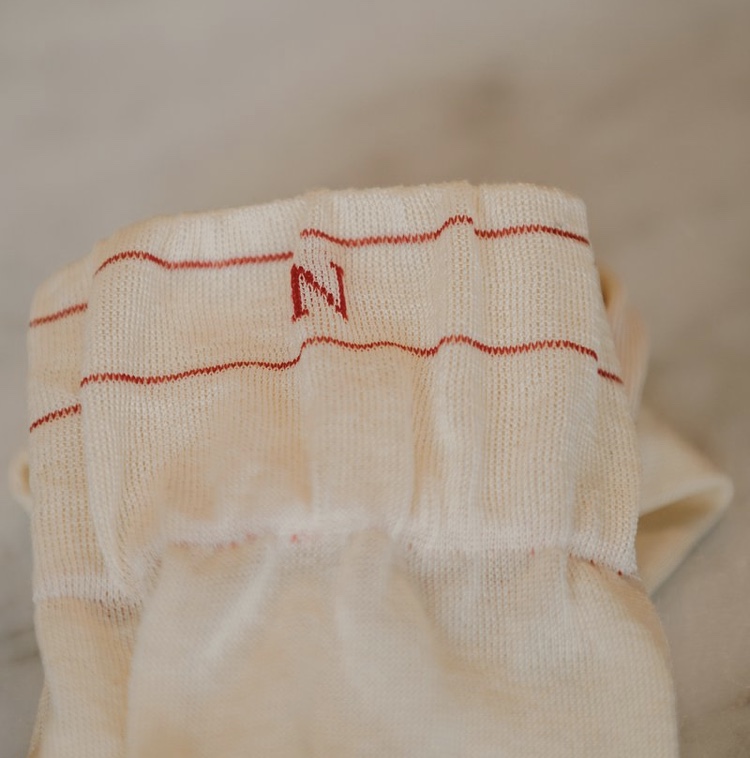 At Mes Chaussettes rouges, you can buy a reproduction of Napoleons’s socks in very fine cotton

At Mes Chaussettes Rouges, your beloved online sock shop, Vincent Metzger and Jacques Tiberghien had the good idea of buying at auction Napoléon’s white silk socks. They are selling a special edition of Lisle cotton knit socks in six colors in a box, a limited edition of 1821, to celebrate the 200 th anniversary of the Emperor’s death. The original socks will be framed and exhibited in the shop of 9 rue César Franck. It’s a nice present with a very fine sword and an N for Napoleon stitched in the socks at 250 €.