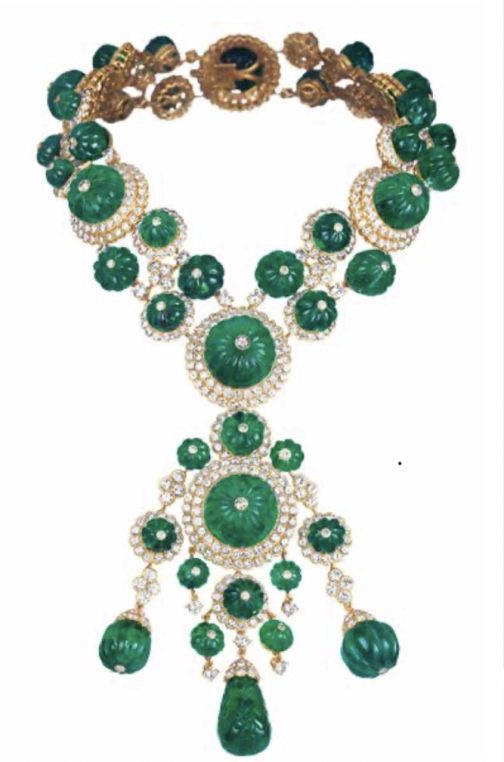 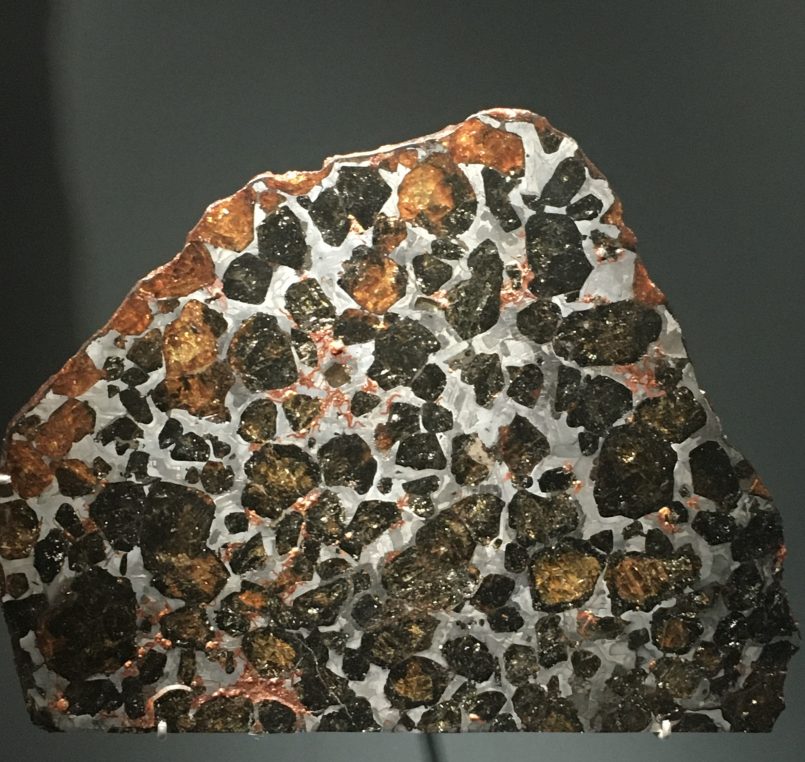 “Pierres Précieuses” is an unusual exhibition  for a Museum of natural history and this is due to the dialogue between the collections of the institution founded in 1793 and the creations by Van Cleef & Arpels jewelers. And it is spectacular, probably the most exciting and intriguing show at the moment in Paris. Located in the Grande Galerie de l’Evolution’s lower space, it shows through 360 minerals and gems, how nature allows precious stones and metals to grow over millions of years. The interconnection of scientific and artistic knowledge has produced this show of  “Emerveiller pour instruire” (Amaze to educate) which is on until June 14, 2021. 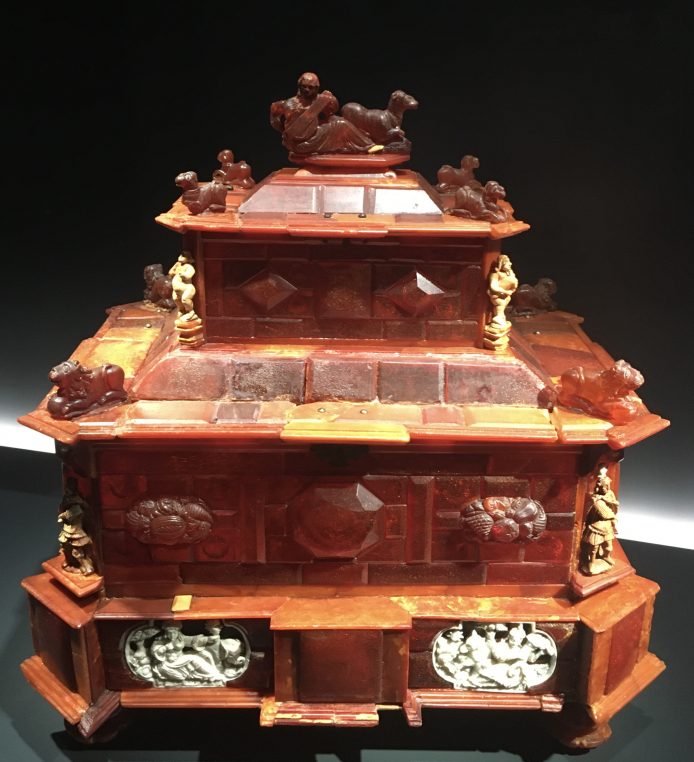 Little magical windows show one after the other the marvels found at the heart of the Earth formed 4,6 billion years ago  and the natural esthetics of the stones and different layers of treasures is immediately fascinating. In one of the first rooms, the marble table given by Prince Orsini to cardinal Mazarin, made in Carrara marble and precious stones is the  center of attention. A mirror enables the visitor to see the design from above. 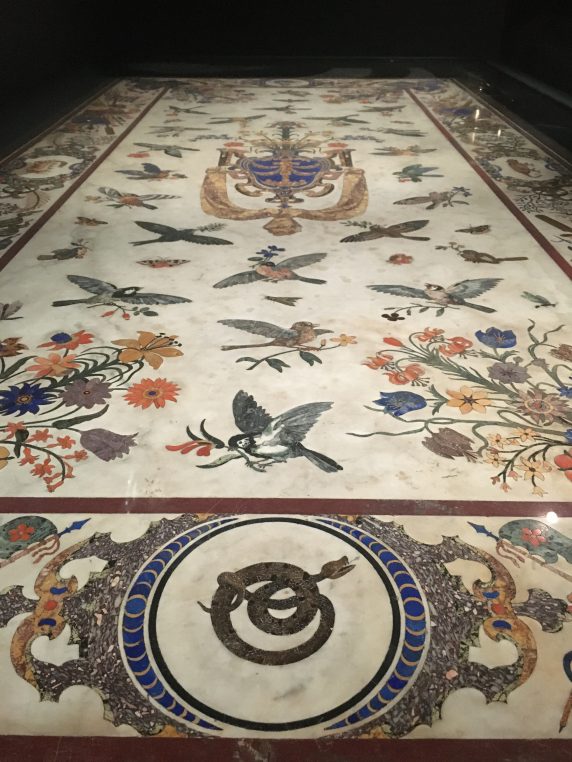 What is particularly attractive in the show is the layout of meteorites and precious stones transformed by the jeweler. Showcases are aligned by colors peridot, spessartine, pegmatite, kunzite, rubellite, verdelite crystal, emerald, ruby, amethyst, agate, onyx… all colors are represented in the most flamboyant way. Opals, carnelian, blue, purple or black spinel make our eye explode with excitement. I learned that amethyst (my favorite stone) was a purple variety of quartz whose color is due to the presence of iron atoms in a highly oxidized form. After they were deposited, all amethysts were yellow  (citrine) and they became purple after hundreds of thousand of years of exposure to natural radiation. 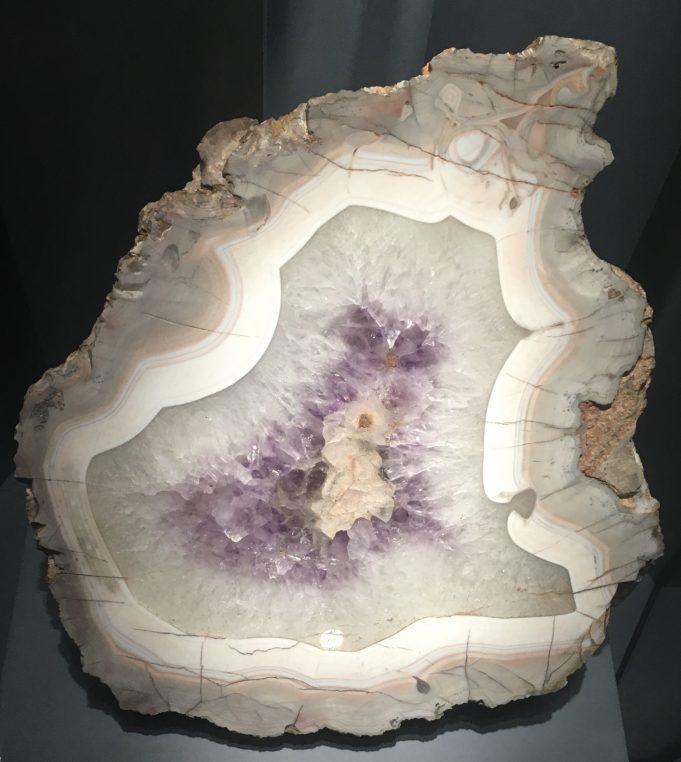 Historical agate with inner amethyst, cut and polished, Ida-Oberstein, Germany. This sample was given to Buffon in the 18 th century, Museum d’histoire naturelle

A spectacular Colombian emerald from Boyaca illustrates the stone formed in saline waters from the Andes. Fancy diamonds come in all colors, thanks to minute quantities of chemical elements while colorless diamond is pure carbon: nitrogen colors them in yellow. Brightly colored diamonds are apparently highly valued today. 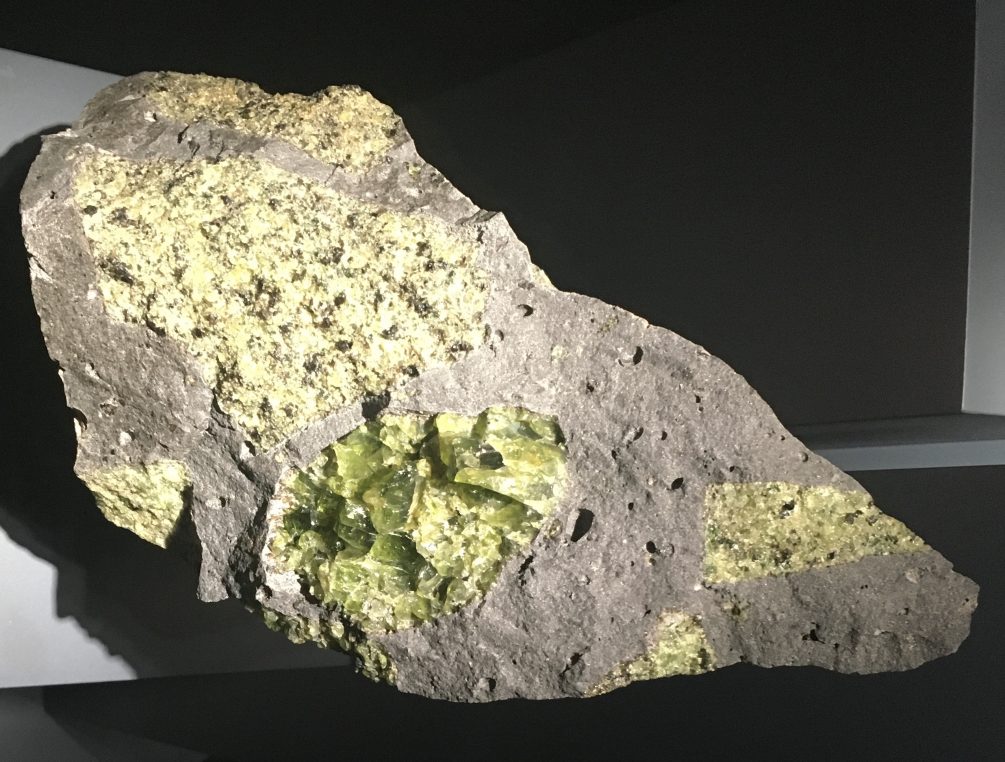 Peridotite and peridot in basalt, Coirons, Ardèche. This sample of basalt used to be lava from an eruption in central France 800 000 years ago

Van Cleef has always been a favorite of mine since I was given an Alhambra necklace by my mother for my 18 th birthday, so it was a double pleasure to see what a fabulous show this is and rediscover their numerous chef d’oeuvres from the 1929 like the collaret in emeralds and diamonds made for Princess Faiza of Egypt, the onyx set from 1971, the cornflower bouquet from 1938… Today Van Cleef & Arpels is still place Vendôme in Paris where it was founded in 1907 and it  is owned by the Swiss group Richemont. The Alhambra line is one of their most popular item.

On October 13, Hotel Drouot has a sale “Naturalia” of rock cristal, extraordinary fossils, a large citrine sphere, etc… which you should see and or buy at if the topic interests you. (Binoche et Giquello room 5 and 6)

3 Comments on “Precious stones glitter at Museum of Natural history”