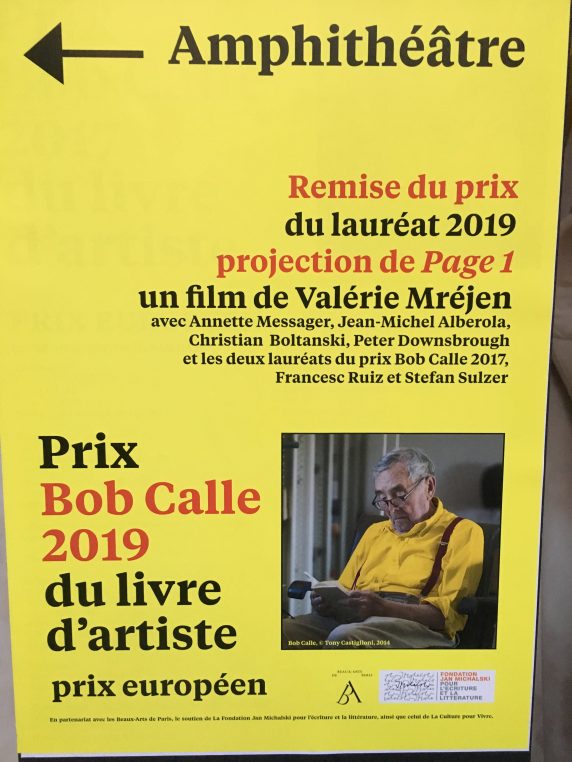 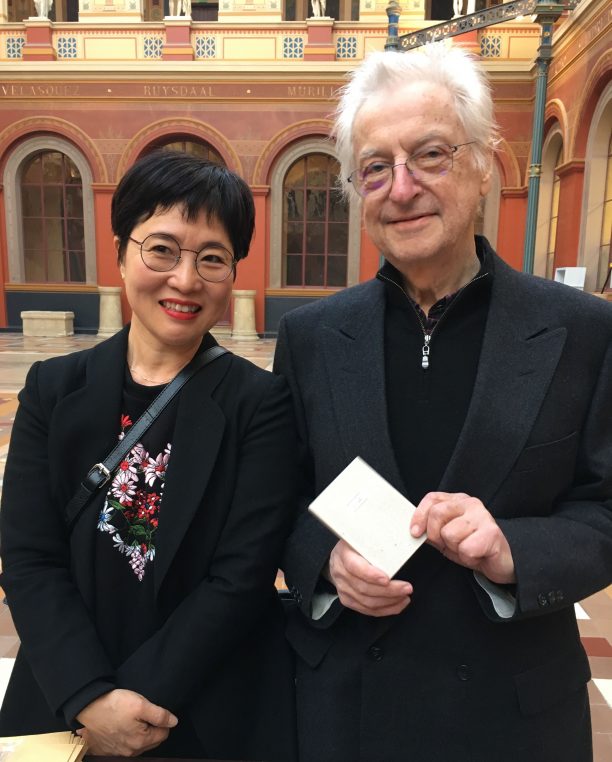 Laureate Jean-Marie Krauth with his Strasburg publisher, Ju Young Kim and his book “0…103”

For the second time, the  5 000€ Bob Calle Prize for an artist’s book was awarded at Ecole des Beaux Arts in the magnificent Amphithéâtre d’Honneur. This year’s laureate is Jean Marie Krauth with a miniature book, “0…103” in a print of 100 at Editions Ju Young Kim in Strasbourg. Laurence Dumaine Calle conducted the ceremony in the presence of Bob’s daughter, Sophie Calle and artists Christian Boltanski and Jean Michel Alberola, two of Bob Calle’s closest friends. A film, “Page 1” directed by Valérie Mréjen showed the importance of artist’s book collectors while all fifty competing books were beautifully exhibited in the library. It was a very special evening, celebrating the talent of Doctor Robert Calle, an avid art collector and friend of the artists. 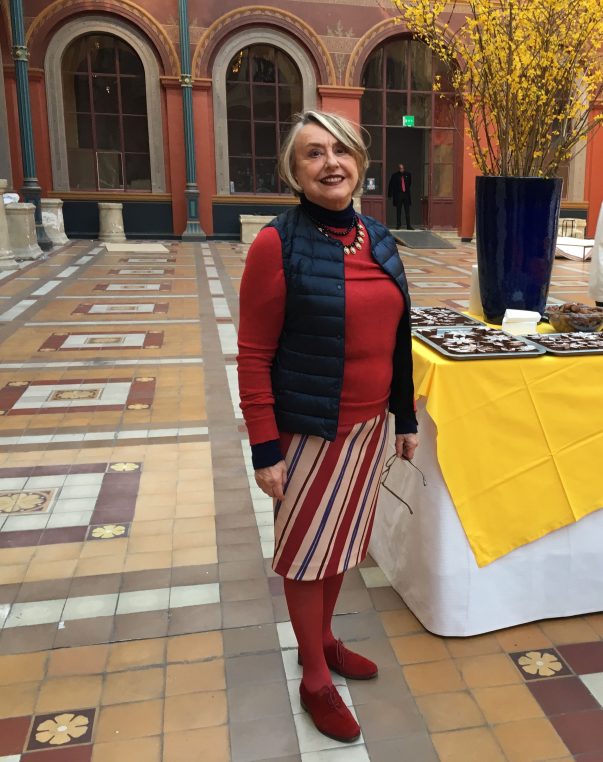 The brilliant film where Annette Messager said that the great originality of artist’s book collectors was that they usually hid their books (sometimes under their bed) instead of exhibiting them on the walls like regular art collectors was fascinating. And the whole evening was dedicated to true art lovers as opposed to “show off” buyers. Bob Calle was a prominent oncologist, who directed Institut Curie for years in the 1980’s. But as the laureate Jean Marie Krauth reminded us, Bob Calle had early on converted the soon to be torn down chapel of the Institute into an exhibition place for artists. 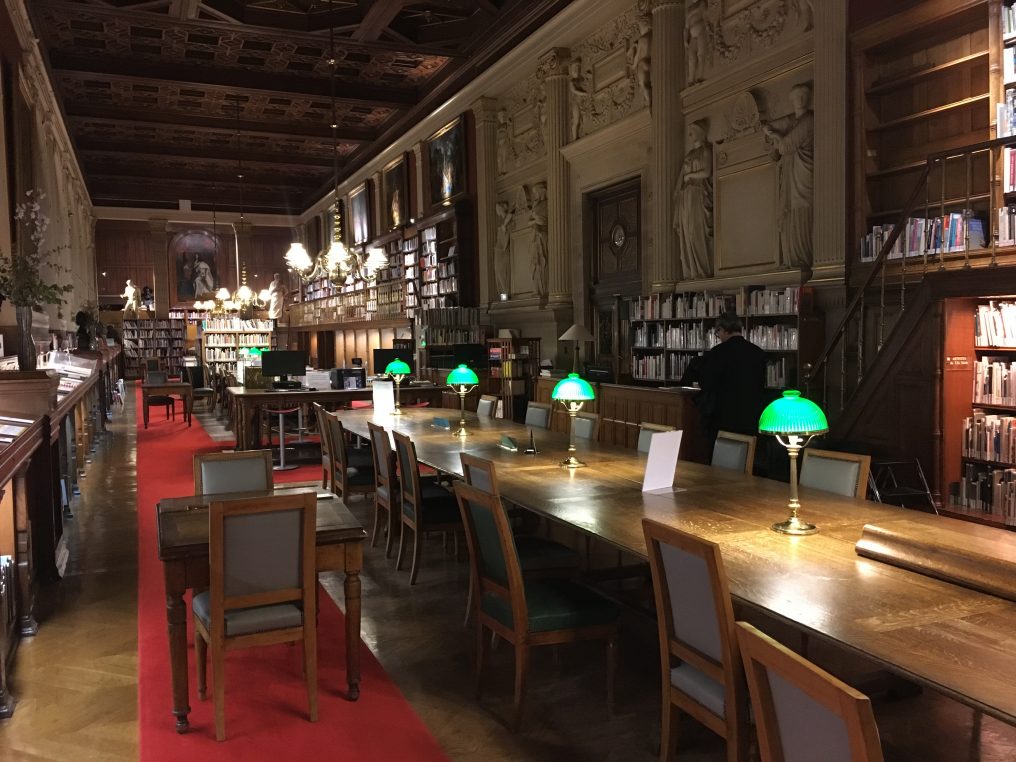 Bob Calle created the collection of Carré d’Art in Nîmes for the mayor of the time, Jean Bousquet (alias Jean Cacharel), and has always been a discoverer of young artists. The Prize created by his widow, Laurence Dumaine Calle and sponsored by publisher Vera Michalski, consisted of fifty works selected by thirteen experts from ten European countries. The jury  comprises 13 members including Alfred Pacquement, Jean de Loisy, Florence Loewy and Jean Marc Prevost… This year a special prize was awarded to the late Flemish photographer Jef Geys‘s book “234”, published on Eddy Merckx’s victory of the Tour de France on July 20, 1969, the same day as the  man’s first step on the moon. 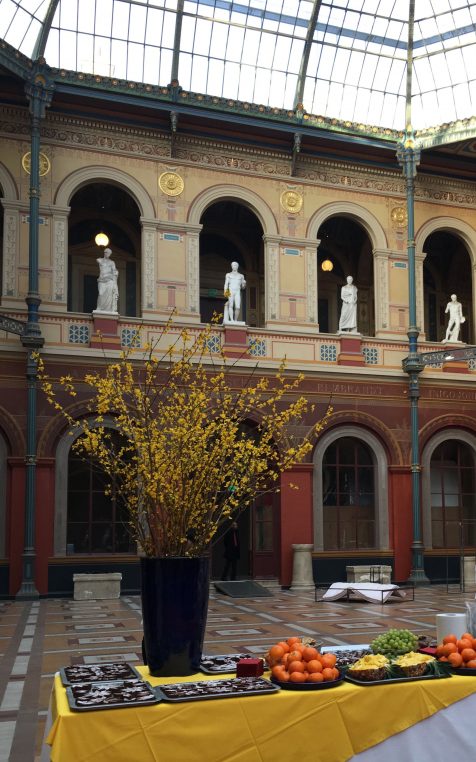 The whole evening was dedicated to art lovers and the simplicity of most artists was reminiscent of Bob Calle’s great modesty and talent. The prize is given every two years and will always honor artists’s books, a work of art which anyone can afford. Well done Laurence for keeping Bob Calle’s flame alive!